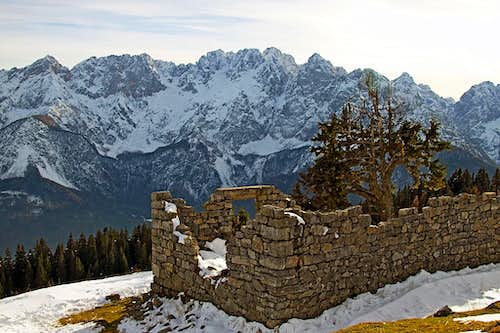 Just on the summit in 2010 a big landslide occured. Take care when reaching the top!
Picture: here

On this page I shall describe all summits of Karavanke/Karawanken which stand west of Kepa/Mittagskogel massif. These mountains are not high and very attractive, but can offer a few nice hikes with great panoramas, easpecially on Julian Alps. 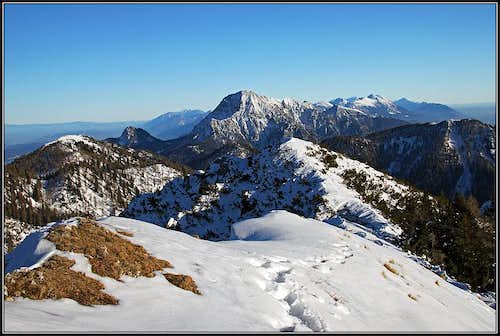 The westernmost part of Karavanke chain would be less attractive for mountaineering if there were not those great views on Julian Alps towards the south, across the valley of river Sava. While Kepa/Mittagskogel towards the east is still a dominant, rocky mountain, the summits west of it are grassy at best, some lower ones are also already below the timber line. Unusual enough, while the Slovenian Mountaineering Organisation marked paths on almost all mountains, especially those outside the National Parc, these bordering mountains (Austria-Slovenia) remaind untouched. On the Austrian side there are more marked paths. Still, there are many unmarked paths, hunters trails to get on all summits - or better - along the whole crest from Kepa/Mittagskogel to Peč/Dreilaendereck.

Trupejevo poldne (Austrians call it Techantinger Mittagskogel) means Tupej's Noon. North of the summit, on the Austrian side the Trupej farm stands and it gave the summit its name. This is not an unusual practice here. A bit towards the east stands Maloško poldne, but there is no farm with such a name towards the north. In the first place this area is visited by hikers. As elsewhere in Karavanke/Karawanken, long hikes along the whole chain are also here highly rewarding. In winter and spring many summits are very nice for tour skiing. And due to a few mountain roads, which reach just below the main crest, you will occasionally also meet a few mountain bikers there. 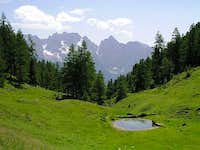 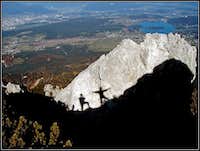 On the east the narrow group of Trupejevo poldne begins on Jepca saddle, 1438 m. The first summit in the main crest west of Jepca is Črni vrh, 1751 m, then Kresišče, 1839 m, comes. The latter is already grassy and so a nice hiking goal. From Kresišče towards the south a strong ridge deters. The first two summits are unimportant (Laskovc, 1760 m, and Tišlerica, 1757 m), but then the ridge rises to Mojstrovica, 1816 m, and Visoki vrh, 1828 m. As these two summits are standing closer to Sava valley and away from the main Karavanke/Karawanken crest, they offer different views on Julian Alps and also on Kepa/Mittagskogel, towards the NE. 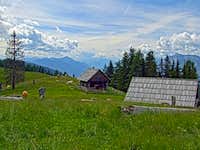 Further towards the west from Kresišče the main crest goes on Maloško poldne / Mallestiger Mittagskogel, 1828 m. Towards the N it sends a few rocks, called Ojstra peč, 1801 m. South of Maloško poldne there's the isolated Murnovec, 1866 m. As paths detour it, its lower northern neighbour is more often visited. The next peak towards the west is the unimportant Ojstri vrh, 1866 m, and then comes Trupejevo poldne / Techantinger Mittagskogel itself. From this, the highest peak og the group, towards the south-west and later west another side ridge goes, bearing first the summit of Lepi vrh, 1926 m, and further down Kopa, 1836 m. North of this ridge the upper part of Železnica valley lies, when coming around this ridge the creek of Jerman flows southwards, directly into Sava. From Trupejevo poldne the main ridge towards the west goes over a few more bumps and the finishes on Blekova alpine meadow, 1629 m, where the western border of the narrow group is.

Other Summits Towards the West 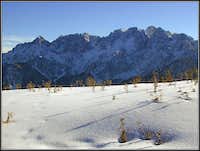 The main crest towards the west has the same characteristics. SW of Blekova meadow there's the nice, grassy summit of Vošca, 1737 m. It used to be a pasture once, there still stand the hut ruins, it offers great views on Martuljek group and is also fine for tour skiing.

Further towards the west less important summits follow: Grpišca, 1676 m, Visoka Bavha, 1647 m, Kamnati vrh, 1656 m, Jerebikovec, 1617 m. The latter lowers down on Korensko sedlo / Wurzenpass, 1073 m, over which the main road Kranjska Gora - Austria goes. The main ridge in this section can be easily hiked, but along it, there's no marked trail and partially it's even a pazhless terrain. Just some basic orientation skills are needed and some steeper slopes must be negotiated carefully.

Even further to the west of Korensko sedlo the summit of Peč / Ofen / Monte Forno stands, 1508 m. There the borders of three countries - Italy, Austria and Slovenia meet, so the point is also named Dreiländereck. On its northern slopes are the well visited ski terrains above Arnoldstein / Podklošter. 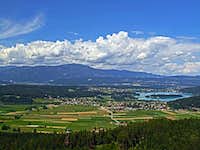 North of Trupejevo poldne group there is a small hill with St. Kanzian church on it. On the SW side it has a nice crag, very popular for climbing. Many routes of various difficulty are made there, as they are only a few meters away from the road, this climbing center is very often visited. If you have more information about it, please post it here or make a separate page! I read that over these walls also a protected marked route goes (still requiring some easy climbing), but what a shame, when trying to do it, I went along the crag and found nothing (to go later on top by the other side).

Some 4 km (less 2 miles) towards the east another place, worth of visiting should be mentioned. If you travel through Kaernten, take the road, which from Finkenstein ascends some 200 meters towards the SE and after passing St. Kanzian crag reaches the nice plateau, above which the Altfinkenstein castle / Stari grad stands. It is well renovated, the western part is creatively transformated into a theatre, where constantly culture events on a quite high level take place. From the castle you can also enjoy a nice panorama.

From the south (Slovenia) you can reach the group from the village of Srednji vrh, just above Gozd Martuljek in Sava valley. From there you can drive further into the group (towards the NE) by a narrow mountain road above Hladnik creek - till the hunters hut on some 1275 m.

The eastern part of the group can be reached by the mountain road, which goes from Belca village in Sava valley towards the north into the valley of Belca. I don't have a good information how high you can drive with a normal car (officially it is closed on 1007 m), but as roads ruthlessly penetrate our mountain world, I would say - each year higher and higher. 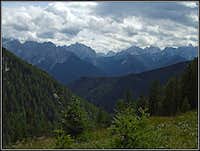 Very attractive (and good enough) is also the mountain road, which just below Korensko sedlo / Wurzenpass (on the Slovenian side) deters from the main road and runs far towards the east. It first gains altitude and then, being all the time very panoramic, runs just below the main Karavanke/Karawanken crest all the way to the upper part of Železnica valley. This is a great mountain bike option!

From the north (Kaernten, Austria) we have also a few choices. Villages north of the group (around Finkenstein/Bekstajn) can be reached by local roads on which we can get from the highway Villach - Karavanke tunnel. From these villages four marked paths ascend the main crest. 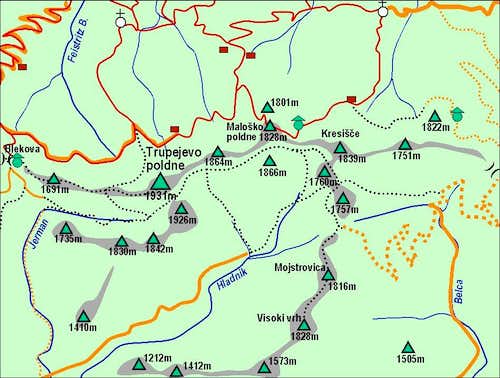 A self-made map of Trupejevo poldne area and some of its paths.

As these mountains are not hard to pass, there are many hiking options, impossible to mention all. So here are just a few ideas for the narrow group of Trupejevo poldne. Climbing was also mentioned (in St. Kanzian's crag).

1. Take the mountain road from below Korensko sedlo / Wurzenpass and drive (by car or bike) towards the east. Park below Blekova meadow. Go on Blekova and from the hut all the time by the main crest on Trupejevo poldne. Descend in Železnica and by the mountain road back.

2. Go from Srednji vrh, 960 m, towards the north by the valley of Jerman creek. The path is not very attractive, it is also a hard mountain bike route. If you go on a ski tour, the valley is quite flat and the lower part of the tour goes by a dirt road. But overall a nice ski tour. From the end of Železnica valley ascend Trupejevo poldne (either left and by the west ridge, or straight on the saddle below Lepi vrh) and return in any direction.

3. Go (drive, bike) from Srednji vrh, 960m, towards the north-east by the valley of Hladnik creek till the hunters hut on 1275 m. From there take the unmarked (but well beaten) path towards the N by Žlebnica creek till the upper meadows. There turn left and ascend Trupejevo poldne. If you want to do more, go one valley further towards the east (Hladnik creek) until you reach the upper path, crossing the slopes of Murnovec in the E-W direction. Or, even better, continue just to the source of Hladnik, ascend Kresišče and/or Maloško poldne, and then hike westwards on Trupejevo poldne.

5. Ascend Maloško poldne / Mallestiger Mittagskogel from Altfinkenstein. You can do a round tour by marked paths and in addition visit the castle. But the ascent has on top a section of not just easy ferrata.

6. From Susalitsch/Žužalče, SW of Finkenstein a mountain road ascends towards the S and then E high below Trupejevo poldne / Techantinger Mittagskogel. I have no information how high you can drive there, but the road and the neighbouring ridge are also marked as a hike. Ascend Blekova meadow, continue on the top and return back or do a broad round tour over Maloško poldne.

A Few Hikes On The West

It is nice to ascend it from the Italian side, from Fusine / Bela peč. Also some hills west of the main summit are panoramic. The other option is a bike tour from Podkoren (on Slovenian side). Drive towards Koren/Wurzenpass, below the saddle turn left and ride on top. Then descend in Rateče. And the third option is of course the chair-lift from the Austrian side.

Use the mountain road (marked), which ascends towards the east just from the highest part of Koren/Wurzenpass, some 300 meters north of the border. It will bring you just below the two summits, ascend both to enjoy panorama! From Kamnati vrh you can follow the border (tiny path, stones) towards the SE (take care of proper orientation). So you reach below the summit of Visoka Bavha. From the ridge of Bavha you can descend towards the south and return by the mountain road, which crosses the whole range on the southern side. Just before returning to the main road, don't miss the very panoramic meadow/hill of Medvednjek (Medvejek), 1140 m.

1. Ascend from Kranjska Gora to Srnjak inn and further upwards on Brvoge. Continue by the side ridge towards the NE, until you reach the main crest on Nizka Bavha, 1642 m. From there continue over many panoramic summits towards the east to Vošca. Descend towards the SE, and later towards the S to Jurež farm and further down to Sava river valley.

2. Start on Srednji vrh, 960 m, and go by mountain road westwards to Jurež farm. There continue up by the meadows and then through the woods above Jurež creek. After good 1 h of walk you reach the upper meadows, and soon afterwards the mountain road. Continue by the road towards the east some 10 min, and when you reach the huts on alpine meadow, turn left off from the road. A good shepherds path brings you over broad meadows on the summit of Vošca. Altogether good 2 h.

In the area there are no official mountain huts. On the pasture east of Maloško poldne there is a hut, called Mitzi-Moitzl-Huette. I guess it's a private hut, where you possibly in the summer and autumn can get a snack or so. Both main valleys - Drau/Drava on the N and Sava on the S are turistically well developed.

Any time of the year.