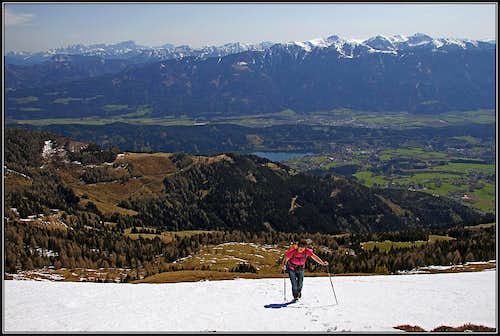 In the very south-western end the soft and rounded Nockberge are standing quite separated from each other, which guarantees nice panoramas from their summits. Actually they form small massifs rather than distinct mountains. Tschiernock is the westernmost summit of the whole group. Just across the valley of Lieser, Hohe Tauern already begin. And south, across the valley of Drau, the horizon is packed with the chains of Southern Limestone Alps. They are already a bit remote to see details, but the most prominent peaks can be clearly recognised.

A detailed description of Tschiernock could be quite long. People have lived on its slopes and exploited mountain treasures since ever. On the southern end there is the nice and touristically developed Millstaedter See, the town with the same name is bearing its name since Ancient Roman times. But the story of Tschiernock is much shorter in mountaineering sense. What can be said at all? That the mountain is easily reachable from all sides, in all seasons, almost in any weather? To the top there are meadows, only a few slopes are more steep and erosion is uncovering a few rocks. The value of the mountain lies in easy hiking possibilities, long and panoramic ridge traverses, biking almost to the top and skiing by its gentle slopes.

Actually, Tschiernock is not the highest point in that small massif. It is the westernmost, due to its panorama the most visited summit, but the ridge stretches from it towards the SE on Hochpalfennock, 2099 m, between them, there is a no name point 2108 m. On Hochpalfennock the main crest branches. The southern branch goes on Tschierweger Nock, 2010 m, where it turns westwards. From this ridge one has a very nice view down on Millstaedter See. The east ridge of Hochpalfennock is short and soon ends on Toerl, 1905 m. There the narrow group ends on the east, further to the east there are more similar mountains, belonging to other small groups.

As said, the most attractive is the view towards the west and the north-west, on Hohe Tauern. Reisseck Group is the closest one, then we have a great view down and into the valley of Malta, above which some of the most beautiful summits of Eastern Alps are rising. Hochalmspitze is the queen there. Further to the north-west and north, one can see already Radstaedter Tauern and a few other summits of Niedere Tauern. The whole north-eastern and eastern horison gives us little details. There is the group of Rosennock, the highest summit of Nockberge and on the east the nearby summits of our small group. Towards the south-east, south and south-west we have a parade of Julian Alps, Carnic Alps and Gailtal Alps in front. And just below us the western shore of Millstaedter See can be seen.

Even if Tschiernock can be reached from all sides, I believe that the big majority of visitors come only from the south-west, using the alpine road, which reaches two mountain huts on 1700 m of altitude. the road starts in Treffling, which can best be reached from Spittal in the valley of Drau. You drive to the western shore of Millstaedter See, then left to Seeboden and up to Treffling. In winter (November till May) the mountain road is closed.

On the W and NW side one can start the tour in the villages above Gmuend - in Platz, 1100 m, or in Perau, 877 m. The whole northern ridge from Gmuend is a long tour.

On the NE side of the mountain we have the valley of Noering Bach (creek). From Eisentratten we can drive into the valley to Innernoering, 1106 m, or a bit more up the valley, till some 1180 m. 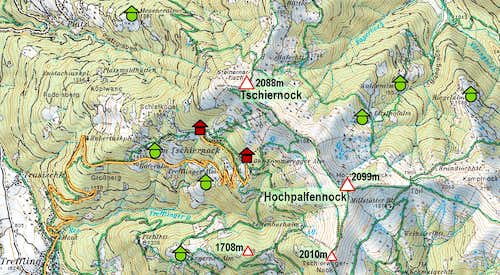 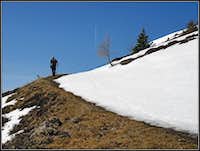 There are many paths to reach the summit of Tschiernock. Many shepherds paths are nowadays marked, so the net is really dense and offers many combinations. A very recommendable tour would start on the highest parking place on the Tschiernock mountain road, then you would do a round tour over Tschiernock, Hochpalfennock and back. As we were there in April and the summit ridge was still under fresh snow, we did only the tour on Tschiernock:

From the ramp, where the road is closed during the winter (1050 m) we go by the marked path No. 11 - first up the road, then by a few shortcuts, until reaching Hoferalm, 1411 m. There the marked path deters left from the road and goes up the meadows. Because there are so many shepherds and forrest paths, we should pay some attention to stay on the marked path, which goes in the NE direction, finally reaching the big parking place on 1700 m. There once was a lower station of ski lift, today there's still a mountain hut. From the hut the path No. 11 continues in the NE direction. It goes in several long turns up, until on some 1900 m we must deter left (inscriptions). Then the path srosses a bit steeper slopes towards the NW, finally reaching the western summit ridge. There we turn right and in a few minutes reach the summit cross. From the road closure on 1050 m we shall need some 3 h. In summer, if we drive up to 1700 m, we have on top only one hour. The path is all the time easy, suitable for everyone.

No limitations. The mountain road from Treffling must be paid (7 EUR). 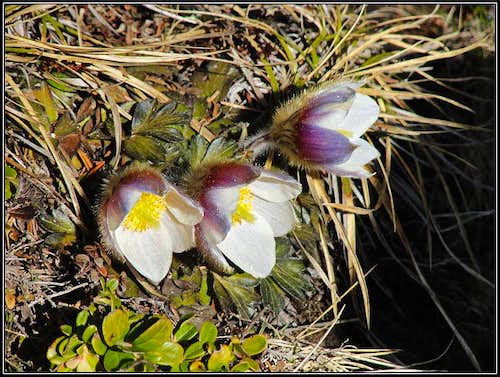 There are many private houses on the mountain:

Tschiernock can be ascended any time of the year. In summer conditions (free of snow) the tour is for everyone. When the mountain road is closed, the ascent is still easy, but takes you some 3 h. In deep snow it is very likely that only tour skiers will do their tracks. The southern slopes are fine for skiing if snow conditions are good. Nice skiing till Hoferalm, so almost the upper 700 meters of altitude. Even better look the slopes towards the north, towards Walderalm and further into the valley of Noeringbach.