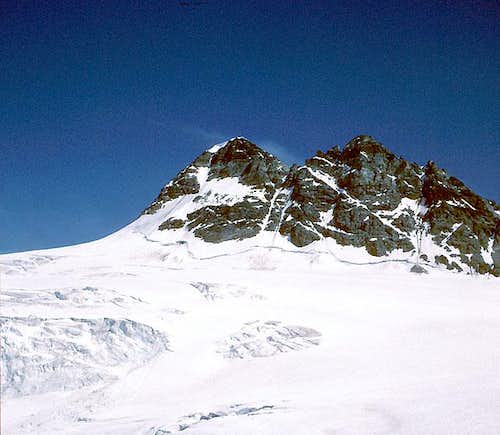 From the Mutthorn Hut -NW 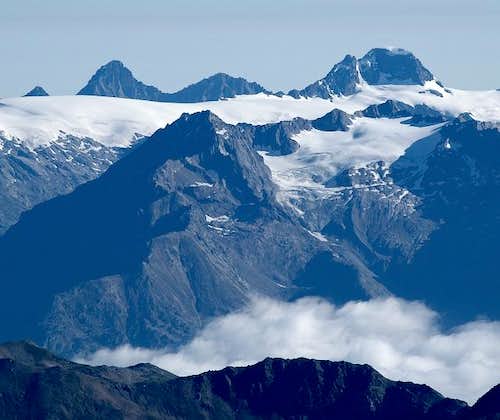 From the south - Tschingelhorn on the right 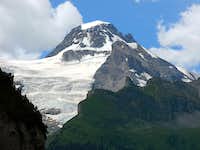 The two summits are separated by a deep notch (at about 3445 m). The eastern summit (3562 m) is the highest. The western summit (3493 m) is unnamed on maps, but is referred to as the Klein Tschingelhorn.

Heinrich Feuz, W.H. Hawker and Ulrich & Christian Lauener made the first ascent of the Tschingelhorn on 6 September 1865 via the South Couloir. 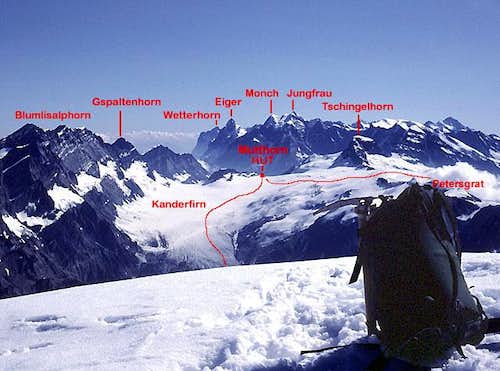 Setting from the SW (summit - Balmhorn) and approach via the Kanderfern

Nearly all climbs of the Tschingelhorn are undertaken from the Mutthorn Hut which is a long way from anywhere and requires glacier travel for all approaches. It is about 6 to 8 hours from Lauterbrunnen, Kandersteg, or the Lötschental. It is also about 6 to 8 hours from Griesalp, frequently done with an overnight stay at the Gspaltenhorn Hut.

Lauterbrunnen, Kandersteg, Griesalp, and the Lötschental are all destinations that can be reached by both private and public transportation.

View down Kanderfirn
From Lauterbrunnen start walking from the Stechelberg/Rütti Hotel (parking for a fee). The route goes past Trachsellauenen, Obersteinberg and Oberhornsee and then up the Tschingelfirn to the hut.

From Kandersteg, you can start hiking from town (the trail head is at the far north end of town just above the Sunnbüel tram station) and up the Gasterntal to Selden, and then to the Kanderfirn and the hut. Selden can also be reached via private auto with a special permit and at certain times of day (one way road). There is also a private van that provides transportation to Selden from the Kandersteg train station.

From the Lötschental ascend to the Petersgrat from either Tellialp or Fafleralp and then down to the Kanderfirn and the hut. Or, you might climb the peak in a very long day from the Lötschental. Note, however, that I have read a couple of trip reports about failed single day attempts from valley bases with reason for failure being soft snow conditions (and rock fall in the South Couloir) on the mountain later in the day.

North side routes
Enlarge for detail
East Ridge MS (PD-AD), about 2 hours from the Wetterlücke. Rock at the beginning, the second part is a snow ridge.

Northeast Flank S (D), about 2 hours on the Flank. Starts on firn, then rock, and finally an ice slope to a possible cornice to attain the summit.

North Flank S (D), about 3 hours from the Mutthorn Hut. (see photo below) Starts on a steep ice slope, followed by a section of loose rock, finishes on snow.

Northwest Flank MS (PD-AD), about 3 hours from the Mutthorn Hut. (see photo below) Main option is up the snow couloir and rock on its eastern edge. Both variations end in the notch between the two peaks and from there follow the west ridge to the summit

A traverse of the two summits from east to west, using either the East Ridge or North Flank for the initial ascent of the Tschingelhorn and a descent of the SW Ridge of Klein Tschingelhorn is included in BERNER OBERLAND Die 100 schönsten Touren by Hans Grossen with Gaston Rébuffat. He indicates rock climbing of UIAA II & III.

South Couloir L (F), about 4 hours from the Mutthorn Hut. This is the normal and most commonly climbed route. It ascends a deep snow couloir or the rocks on its east side to the notch between the two peaks and from there follows the west ridge to the summit. There is rock fall danger in the couloir.

Mutthorn Hut
Most ascents are made from the Mutthorn Hut which has places for 100, a warden and offers full service.

It is also possible to climb from the Schmadri Hut which has places for 12 and no warden or services.

The AACB Homepage has a link to more information on the Schmadri Hut (in German).