Since Google has blessed us with its magical Google Earth software you can visit any corner of the world from the chair parked in front of your computer. Thankfully Velebit is amazingly clear so you can discover its corners and see for yourself how it looks from the above and where are the places this page is dedicated to.

Each geographical point of interest described on this page has coordinates on the top of its section. You can use these coordinates with Google Earth’s fly to search engine. Just copy the coordinates (like it is written, with coma) and paste them into fly to tab and press enter. And, of course, enjoy the flight! 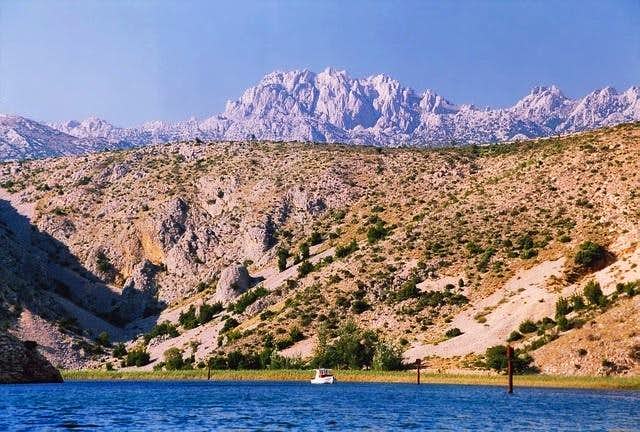 Both approaches are not usable till area is cleared of mines! More about it is in section below.

Unfortunately this is not only informative but also a nostalgic and warning page for those who might find Tulove Grede too attractive. For your own safety formula is simple; just look and don’t touch, don’t even approach. This beautiful place used to be my playground during childhood and early teenage days and now is inaccessible. I’ve been on Tulove Grede around 50 times but not in last 15 years and miss the place badly. What happened here was war. As along much of the continental side of South Velebit, SE Velebit was border between the armies of Serb occupying state and Croatia. Dividing line was most unstable right here and result is that both sides mined the area and mines were not charted. Tulove Grede are most polluted with mines! Although some wandered around Tulove Grede and reached the summit after the war this highly unadvisable! To visit this area you can use Mali Halan road which goes over the Velebit and connects Obrovac town on Zrmanja river with Lika region. It is safe but don’t move away from the road!

During past few years there was lot of talk about clearing Velebit of mines but since populated areas have higher priority this has been postponed all the time. It seams that now few banks are going to sponsor the cleaning and last word is that it will begin in summer of 2005.

Because of open spaces Tulove Grede offer beautiful views on all sides. Towards NW and SE massif of Velebit stretches. On the NW is SE end of S Velebit, dominated by steep grassy pyramid of Sveto Brdo (1751m). Towards E and SE SE Velebit stretches. Its bulky white highest peak Crnopac (1404m) dominates the area. On the S is wide North Dalmatian plateau with highest Croatian peak behind its SE end; Dinara (1830m). Right of Dinara are Dalmatian mountains. Towards SW in the foot is Zrmanja river. Behind it is small Orljak (674m) mountain and Bukovica region. Further behind is vast flat area of Ravni Kotari (Flat Counties), towards SW and W. Behind it are islands of Sibenik & Zadar archipelagos.

Bukovo Plece (1170m) (Bukovo Pleche) is highest peak of few kilometers long Bukovo Plece (1170m) – Kuci Marunica (1120m) (Kuci Marunicha) ridge that stretches in NW-SE direction NW of Tulove Grede (1120m). They are divided by a pass through which Mali Halan pass road (1045m) crosses seaboard streak of peaks and enters inner Velebit. As Tulove Grede Bukovo Plece is part of seaboard streak of peaks but while Tulove Grede belong to SE Velebit Bukovo Plece belongs to South Velebit. Ridge is quite sharp and consists of torn cliffs. It isn’t marked but orientation is easy on this open rocky terrain. Ridge is very panoramic and offers beautiful views like Tulove Grede but in few aspects it is even better; you get to see beautiful Tulove Grede and Sveto Brdo (1751m) is bit closer. Because of cliffs it isn’t possible to walk entire ridge (Kuci Marunica section which is closer to Tulove grede) and on some places you have to descent a bit down to northern slopes to avoid them.

Mali Halan pass (1045m) is highest point of depression or series of basins which divide S from SE Velebit. It is placed between the peaks in the continental streak, above Lika region. At the beginning of 19th century there were few roads over Velebit and not a single one in a very long stretch of S and SE Velebit (over 80km) and the only other normal road suitable for traffic at that time was the one over Vratnik pass on the NW end of Velebit which connected coast (Senj) and Zagreb (capital). Since there was no road along the coast of Velebit the only way to reach Senj-Zagreb road, popularly called Jozefisnka Cesta (Joseph’s Road), was to go around SE end of Velebit and through Lika. Croatia was then under the rule of Austro-Hungarian Empire and emperor Ferdinand I ordered to build another road over Mali Halan. Task was given to legendary Croatian road builder Josip Kajetan Knezic (1786-1848) who build most famous mountain roads in Croatia, including 3 over Velebit (Vratnik, Ostarije and Mali Halan passes roads). Construction began in 1825. Seaboard part between Obrovac on Zrmanja river and Mali Halan pass, 24km long, was finished in 1827. Immediately construction of 17km long continental or Lika section between Mali Halan and Sveti Rok in Lika began. Opening day was October 4th 1832, the day of Sveti Franjo (Saint Francis). Church dedicated to him was erected on Podprag (684m) by the road were opening ceremony was held. Knezic did a marvelous job and road was a masterpiece compared to Simplon road over the Alps which connects Italy and Switzerland. It connected Zadar on the coast with Zagreb and further with Vienna and Budapest.

In the war for Croatian liberation between 1991-1995 road and area around it, especially near Tulove Grede, saw biggest clashes between Croats and Serbs on Velebit. 9 Croats lost their lives along the road. Even today there is still destroyed Serbian tank on the road, close to Mali Halan pass. On the spot where road gets closest to Tulove Grede and fantastic view towards sea opens is chapel for killed commander Damir Tomljanovic.

Till today road remained the macadam. When Zagreb-Split highway and Sveto Rok tunnel were under construction lower 9km of the road, on seaboard side, were asphalted. Road is under heavy influence of the Velebit climate so on spots it is in quite bad condition but still passable for all cars. From Sveti Rok in Lika till Mali Halan road is quite good. It goes through beautiful beech forest without any views. From the pass to the seaboard foot views are open all the time.

If you are using public transportation closest you can get to Tulove Grede is Obrovac town from Zadar. How to reach Zadar see on Paklenica page. From Zadar buses depart to Obrovac several times a day. But from Obrovac it is long walk to Tulove Grede using Mali Halan road (24km). That would be around 5-6h.

By Car
From Zagreb: head towards Zadar via highway and after 207km exit at Sveti Rok. On the junction with normal road turn left towards Gracac. After few kilometers is junction in center of Sveti Rok where right branch is beginning of Mali Halan road that will take you on sunny side of Velebit.

From Zadar: head towards Obrovac (50km). Once over the bridge in Obrovac left road is beginning of Mali Halan road.

Till area isn’t cleared of mines no season is good. After it is cleared any season is good. Mali Halan road isn’t cleaned in winter which means impassable. Seaboard side till Tulove Grede is usually clear of snow but problems are huge drifts made by Bura wind which melt slowly and can block the road long after snow fall.

Conditions on Velebit are very well known thanks to Zavizan meteo station, which is observing weather since 1953. On WeatherOnline & DHMZ (Croatian Meteorological and Hydrological Association) sites you can find current data for Zavizan and even forecast for Zavizan on WeatherOnline. Zavizan is around 5°C colder than Tulove Grede.

Here are the links where you can find out about the current weather on Velebit (Zavizan) and forecast for Croatia:

There was never a mountaineering object anywhere close to Tulove Grede. There is talk that refuge will be opened on Veliko Libinje but no official word yet. Between Tulove Grede and Mali Halan there is pass called Kraljicina Vrata (Queens Door). From it branch leads to Veliko Libinje and at the end of the road should be new refuge. This is beautiful access to Sveto Brdo (1751m).

Or you can always sleep in your car till area is cleared of mines. But since one cannot move away from the road it isn’t necessary to sleep on the mountain.

Danger of mines out of the road.


Other Velebit pages on SummitPost

Note: Text on this and pages above is copyrighted and cannot be used in any kind of publications.