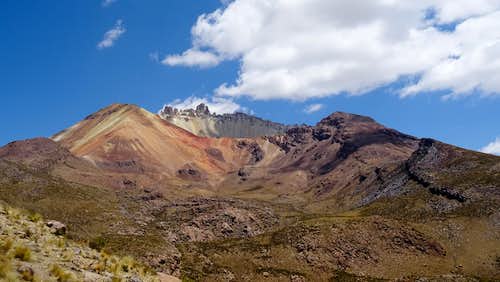 Tunupa is a dormant volcano in the Potosi department of Bolivia on the northern side of the Uyuni salt flats. There is a cave with mummies about half way up. 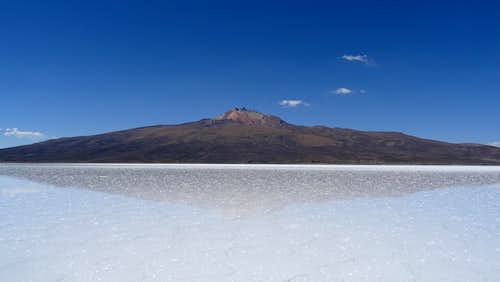 I asked around about transport that went from Uyuni to Tahua or Coqueza (starting points for Tunupa) but was told there was no public transport to these places directly from Uyuni and that my best bet was to get a bus to the Island Incahuasi and negotiate with a tour operator from there for a lift to either Tahua or Coqueza, more on this later. I Got a bus bound for Llica from Acre steet, stating that I wanted to be dropped off at the Island Incahuasi, the journey took about 2-3 hours. At the island Incahuasi, I could see Tunupa very clearly on the horizon and a map stated that Coqueza was 40 km away, rather than negotiate with a tour operator (it looked like none were going in that direction), I decided to camp on the island and cross the flats the next day, at about 5 km/hour I should make it in 8 hours. There is no official camp site on Incahuasi but there was no objection (or charge) from the people who lived/worked there (there was also another camper, a guy who had cycled from Tahua and was planning to cycle to Uyuni the following morning). The next day I started walking at 7.30 am and arrived at Coqueza for just before 4.00 pm. Coqueza is a small village but did have a 'salt hotel' that was reasonably priced, 100 Bs for a room with bathroom plus desayuno and cena. Regarding the trip back, on the morning of my hike, I asked the hotel people if there was any transport to Uyuni, they said a bus would leave tomorrow that went directly to Uyuni. The day after the hike, I caught this bus in the main square (it was due to arrive at 12.00 pm but arrived at 1.00), presumably it had started at Tahua. The bus went across the flats and arrived in Uyuni at Acre street where most buses arrive and leave. I asked the lady who I paid on the bus if it was possible to get a bus from Uyuni to Coqueza and she said yes, pointing to the ticket office. This is located on the left side of Acre street (with your back to the centre of Uyuni), northwest of Peru street, about half way up the block, so there is public transport from Uyuni to (at least) Coqueza, I cannot confirm on the frequency but I would guess at least once a day.
Note: While making enquiries regarding getting to Uturuncu, a tour operator gave me a quote for a 2 day trip to Tunupa which was 3000 Bs, when I said no thanks, they dropped it to 2500 Bs which is still a lot of money (if there's 4-5 of you then this works out ok but it's still worth looking into the public transport).

The trail starts as a dirt road via the west side of the plaza in Coqueza, this is were you normally pay a fee. At about 4100 metres, the dirt road becomes a path, the path then becomes a bit vague but keep heading for the lowest part of the north rim (looking at the mountain, this is to the right of the colourful part of the mountain). Once you reach this point (at about 4800 metres), take a left and walk up the colourful part of the mountain where there is a 'look out' summit at 5120 metres where it appears most people stop (to be honest, the best views are from this spot). If you wish, you can carry on walking towards the north rim though I would recommend you're in shape as it gets steep and have some scrambling experience, it's possible to get between 'teeth (i.e. rocky outcrops)  on the north rim though this takes some effort. This will get you to about 5280 metres but if you want to go any further, you will require climbing equipment to reach the summit. Coming back, the path can get a bit vague and from about 4500 metres onwards, I found myself hiking down a dry river bed which I didn't recall (turns out this was parallel to the path and the path was only about 100 metres to the west. Not a big deal, at the end of the day it was just a case of heading south, also there were plenty of empty water bottles that told me that this was something of a route. In all, I spent 11 and a half hours on the trail.
There also appear to be routes from Tahua and Jirira ( to the east).

There was a small fee to access the main route to the mountain, I don't entirely recall what it was, possibly 30Bs.

Not sure but it seems to be an all year round mountain.

Couldn't say but this is a one day climb and the salt hotel is more than adequate.