Martin Cash
Add photos See all photos
Sergio and I had planned this trip for months. The original idea was to climb the upper North Ridge with Gendarme with an approach from the north. As things got closer and I read some trip reports, I thought we should try for the complete ridge. After all, what ridge climb is complete if the entire ridge is not climbed. The lower start sounded pretty easy with 1 pitch of 5.8 / 5.9 and some 5.7. As the weekend appraoched, I checked the forecast and it seemed kinda iffy. I was sick of weekend after weekend of rain, and was determined to make the trek in there anyways. We departed the Stuart Lake trailhead in early afternoon enjoying the shade provided by the forested trail on a hot day. Departing the trail after the second swamp, we crossed the stream. I had lost the climbers path here on previous trips, but Sergio had been in here many times and knew what to do. We picked our way over logs and through the trees until finding the middle fork of Mountaineer Creek. We followed the nice path all the way up the valley to the first clearing. What we saw worried us, a blustery, clouded over Mount Stuart. We set up camp then hiked up to the base of the Ice Cliff Glacier to get a closer look at the start. Things looked good, but we were worried about getting up there the next day and having the weather close in on us. After getting back to camp and making dinner we decided to explore the surrounding boulderfields. We both enjoyed bouldering many easy problems on the clean beautiful granite. We started at dawn the next morning quickly working our way up the screefield. The weather looked great, clear blue skies and no wind. We scrambled up the slabs and cracks directly below the crest of the lower north ridge trying to find the best way to the start of the 5.7 layback crack. An interesting 4th class crack system brought us to a ledge about 100 feet below the crack. I noticed the weight in my pack at this point. I had not done much hard rockclimbing with a significantly heavy pack before. I looked for a way up, then we stopped and put on gear. I scrambled up some 4th class terrain aiming for the crack above until hitting a hard spot. I tried several different variations finding difficult climbing all ways. I got on to some sketchy terrain to the right then on a small ledge, but could not figure out how to get up to the layback. Not feeling good about downclimbing that with a pack, I lightly dropped my pack to the ledge first. To my dismay, the pack bounced off the hip belt falling about 100 feet down to the snow and ledge below. Crap! Sergio expressed his doubts with the start saying it did not look good. I scambled all the way down to the lower ledge and picked up my pack. Looking up, I saw an easier entrance to the crack. I scrambled up from the left side of the crack. Some interesting mid 5th class cracks were followed by a very hard crack above me to my dismay. I got back to the ledge frusterated and pissed. We had just wasted a ton of time and still weren't sure how to get up there. Screw this, let's go for the upper! A long hike up the Stuart Glacier brought us to the entrance to the access couloir. The start had some steep snow but there were nice easy steps from previous climbers. 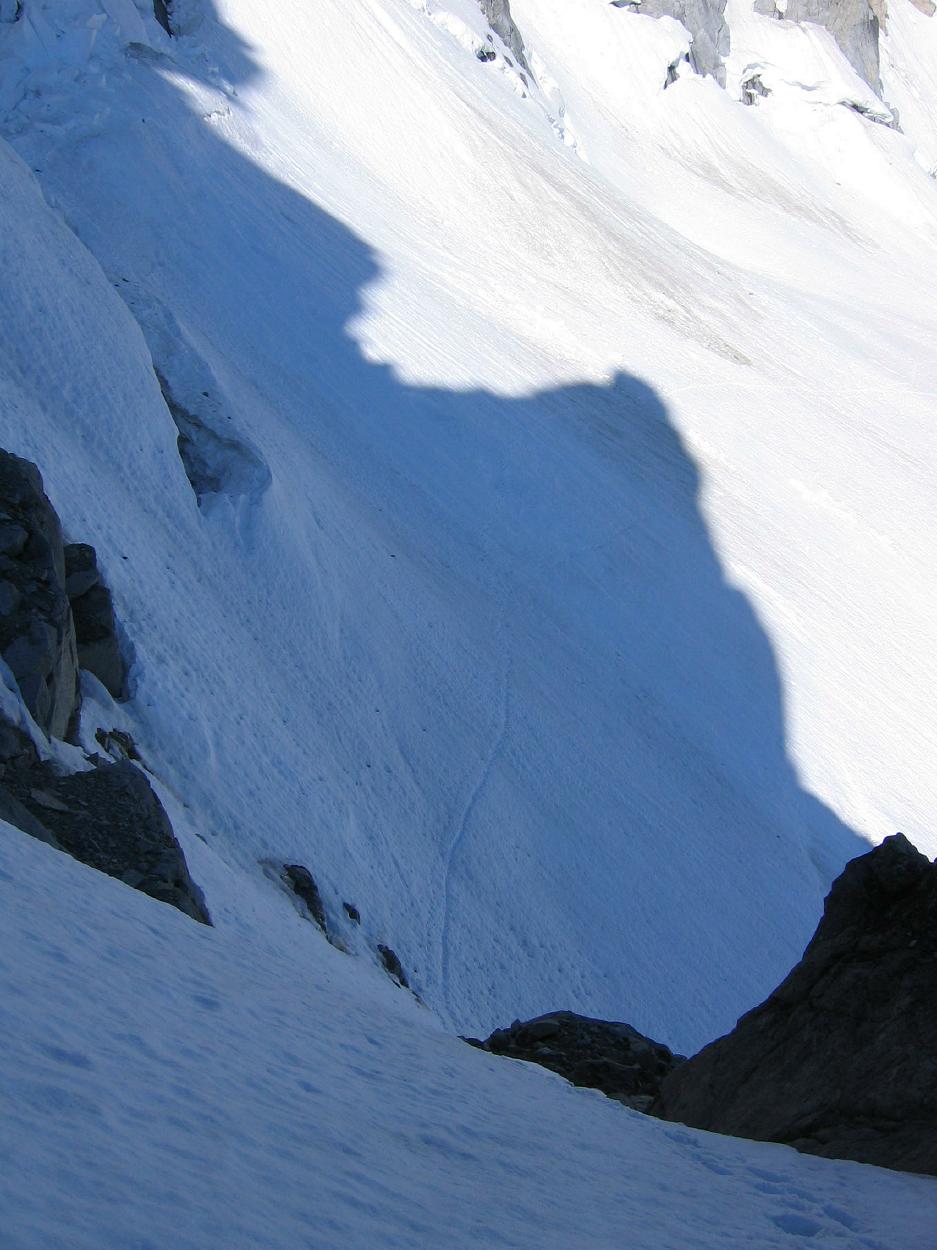 Above that we scrambled up some nice 3rd and 4th class rock to gain the crest of the north ridge. We started simulclimbing with 2 other parties trying to avoid a clusterfuck. After about 300 feet there was a steep bulge with a 5.7ish move to get past. Most of the climb was 4th class to this point. The ridge gradually started to steepen and become more challenging. I lead up some ridge but stopped waiting for another part to pass. 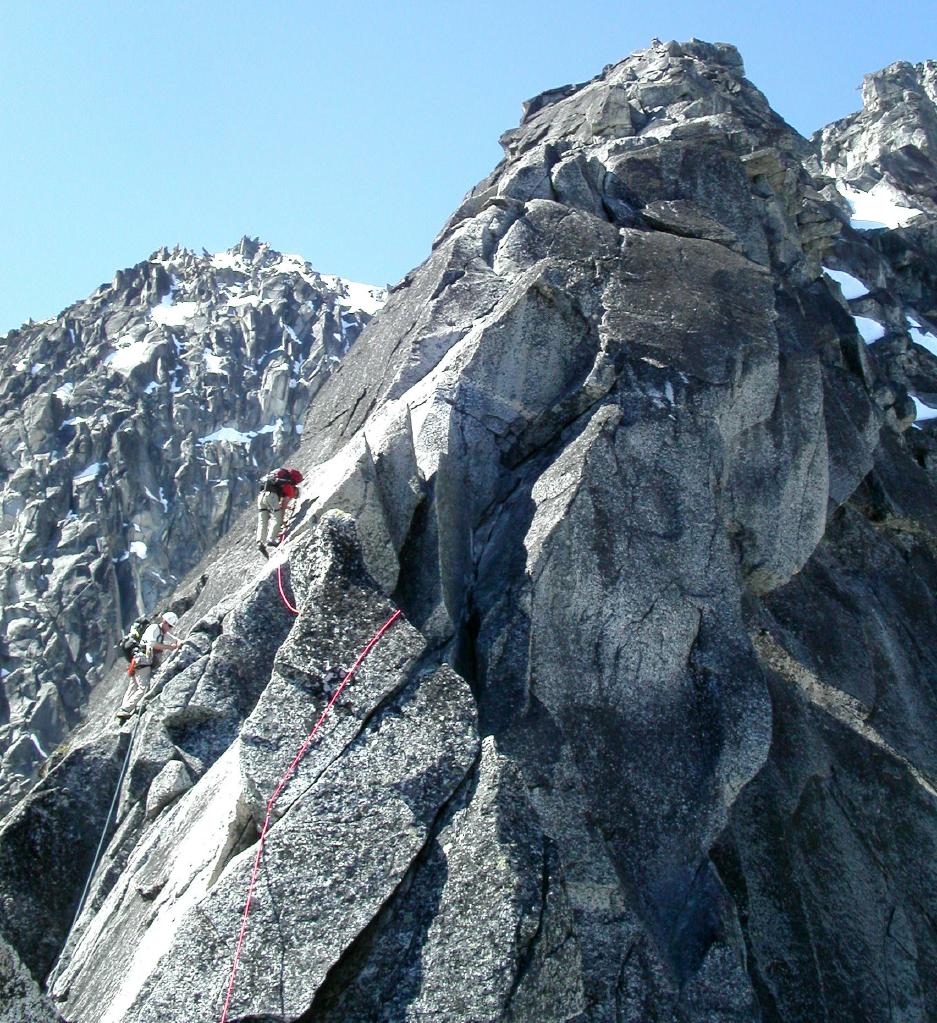 I passed a few challenging moves but mostly easy terrain. I saw a gendarme on the ridge above me and climbed up the face to the top. From here I looked down and saw the very obvious "slab with crack" pitch as described in Nelson and Potterfield. The Great Gendarme was a few pitches away. After scrambling down 4th class on the other side I started to go up the slab, but noticed a ton of rope drag over the gendarme. I built an anchor and belayed Sergio in. He got a nice view from the top of the gendarme. 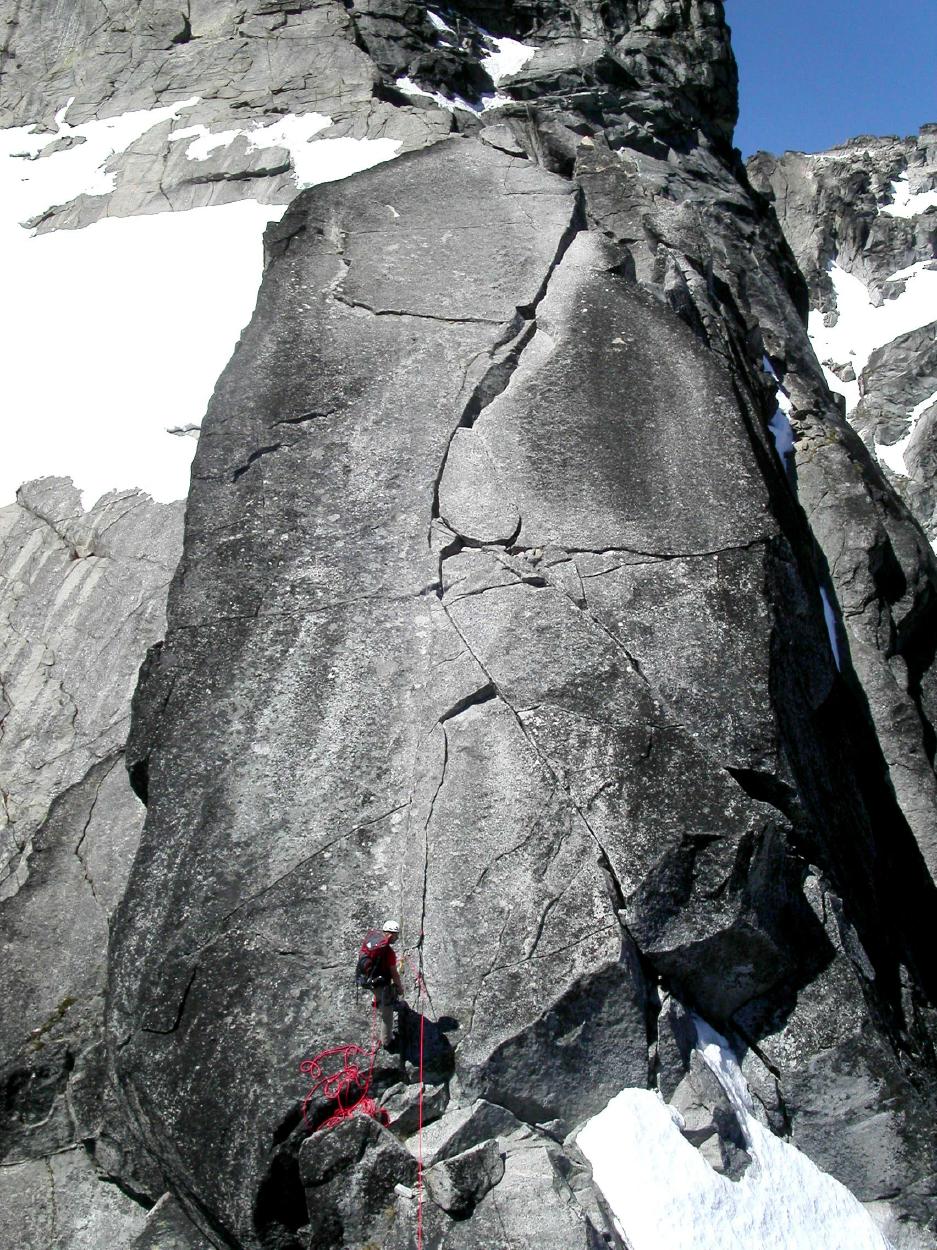 I lauched up the slab expecting to find 5.7 terrain as per Selected Climbs, but it was barely 4th class. The next section consisted on this spectacular knife edge ridgecrest with exposure both sides. I found some gear and thoroughly enjoyed this section, as did Sergio. 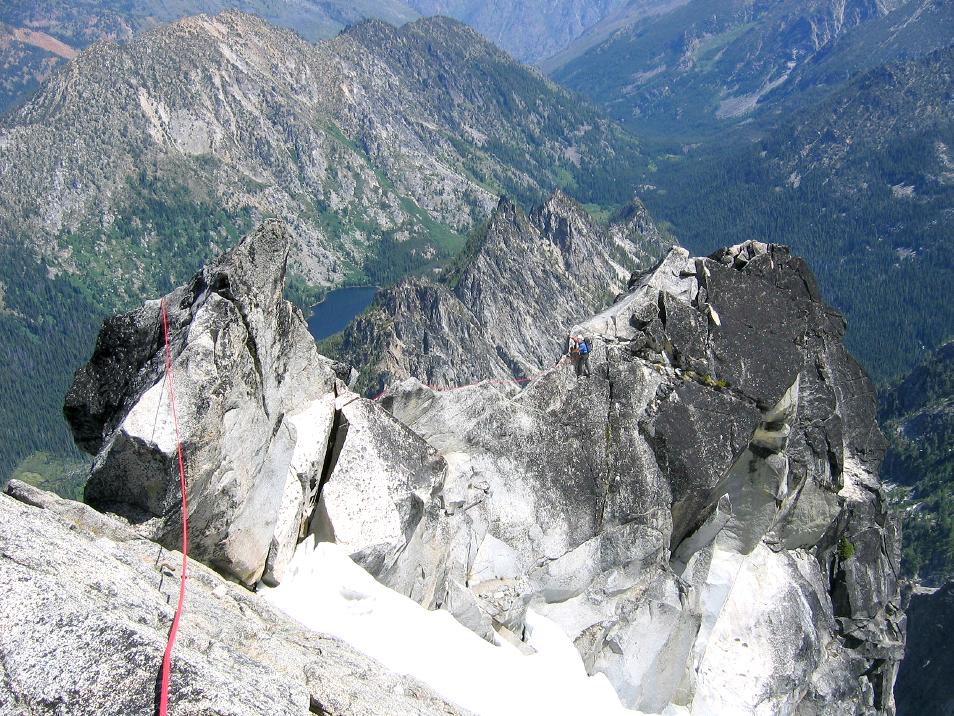 We made it up to the base of the gendarme, and it looked good and steep. The rappel option still had lots of snow in it. I was feeling kinda tired and could feel the altitude, but decided to give the gendarme a shot. The first pitch follows a wavy lieback up this steep pillar. The first half was fairly straightforward 5.8, but above that it looked continuous. I placed a cam and launched up the sustained upper half, but backed down not feeling good about it, and feeling like I didn't want to fracture my ankles on the ledge. A couple more iterations and the day was getting very late. We didn't want to bivy on route, so we decided to do the standard finish instead. We rapped off into the gulley. I lead accross on a very sketchy pitch of ice and snow covered slabs to the easier cracks above. The view up to the Gendarme was amazing. 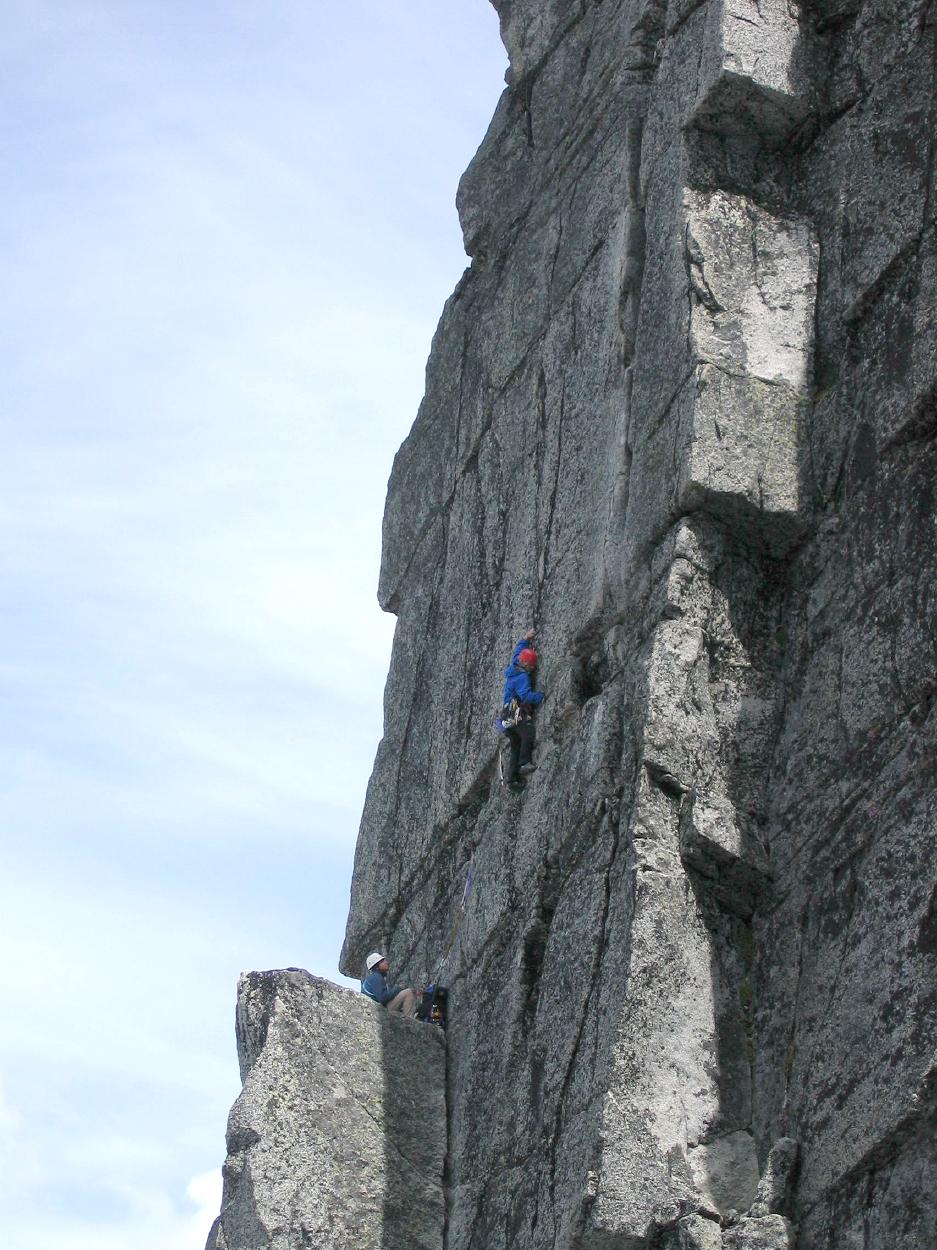 Sergio lead off some 3rd and 4th class pitches simuclimbing through occasianal mid 5th sections. The way up was harder due to lots of snow and ice still on the upper mountain. We looked up and saw the summit. I was surprised just how much terrain after the gendarme it is to the summit. 20 minutes later we were on the summit and took a long break. 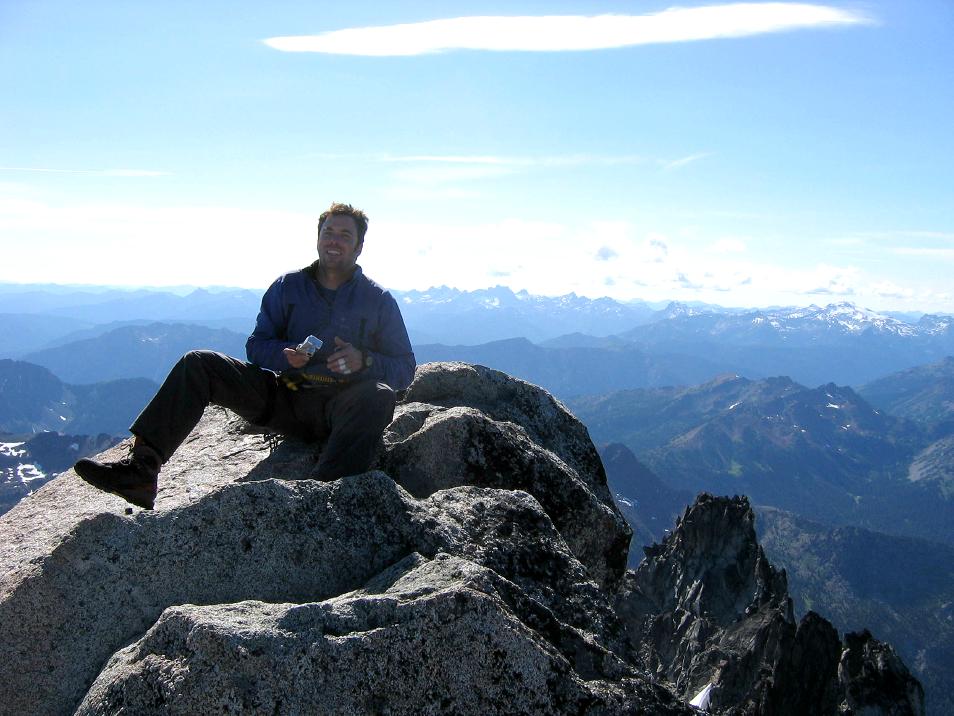 After rehydrating, we started down towards the crest of the Sherpa Glacier. When we arrived, we saw a bad sight. The upper half was much steeper than earlier in the year, icy, with a rock band about 200 feet down. Oh no! It was getting late and we had no intentions on bivying way up here. 5,000 feet of scree later we arrived at the base of the hideous Cascadian Couloir. Why people climb that thing is beyond me. We found a campsight in the Ingalls Creek valley. I bivied in my pack and had a 1 pound bag with my shell for a pillow. Sergio used the rope for a pad, but had a warmer bag. The next morning we began the long hike all the way around the mountain. I was very hungry having finished all of my food. We estimated it to take 6 hours, but we made good time and made it back in just under 4 hours with several fun glissades down the Stuart Glacier. After eating a huge breakfast, we hiked out. This was a great trip for me. I enjoyed the long fun climb even though we didn't complete our planned objective. I'll be back for the complete. Mount Stuart is a big peak and any technical route up it is a good trip.

I don't know how I missed this TR but I did. However, the nice thing about a lousy rainy day here in eastern washington is that I have a chance to find jewels such as this one. Great pics Martin and a great read. Congrat's on your nice climb. Since I lack the skills to do what you do, I'll probably do the sufferfest up the Cascadian to get this one.

Dean, thanks a lot for the nice comments! That was definately the best alpine climb I did this year. Stuart is a pretty big peak.

I think the Cascadian would be a nice moderate snow climb earlier in the Spring. You could also glissade the descent! It would also probably be a nice ski down. I'm just not a big fan of scree.

I just found the report. I have not been very active on SP lately. Great TR of a great, classic line. I liked the "ridge is not a ridge unless it's a complete ridge", what a great attitude. Thanks for the photos, in places it looks harder than the ratings. The rock quality looks awesome! I always thought that Stuart's N. Ridge was a great line to climb, your TR points out, that it should be another must do.

Thanks for the nice comments. The rock is excellent, probably the best truly "alpine" rock I've ever been on. It is a classic must do line, you should give it a try! Definately one I will do again, but the next time it will be the complete with the gendarme.

I stumbled across it just now, I think I read it first on cc.com. Good stuff! I love the picture of the guys on the Gendarme, I never really saw a picture of that pitch, because you can't really "see" the pitch from the belay, you have to be where you guys are.

You'll repeat it for sure, next time with Gendarme!!

Re: thanks for TR

Hey, thanks a lot Michael! Yep, thinking of trying the complete with Gendarme next year.

Looks like you are enjoying yourself over in Germany. Thanks for the great photos.

Now I can finally see why my friend Randy is excited to take me there one day. Excellent TR, well documented, really gets and sustains your attention......P.S., the granite reminds me of Yosemite. Just wonderful