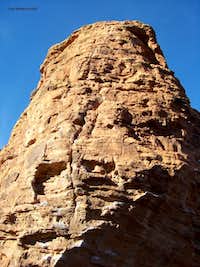 Director of Humor Affairs, 5.11a
Turtle Wall has just one route below 5.10b and only one 5.10b. Many of these routes were put up by Joe (Jorge) Visser as well and he can rate things a little stiffer in comparison to Todd Goss and company. So needless to say, it is probably not worth the trip back through Paradise Canyon unless you are an accomplished sport climber. The rock is nothing to write home about as well, as it is quite sandy and soft. The main purpose for Turtle Wall is to escape the crowds at Chuckawalla Wall. Turtle Wall is an additional mile further down the trail which eliminates sport climbers opposed to cardiovascular activities. It actually makes for a beautiful short hike among pristine Cottonwoods and desert grasses. As you approach Turtle Wall from the south, Cougar Cliffs come into full view to the north. Black Rocks, although not in clear view, is located in between Turtle Wall and Cougar Cliffs to the east, within short hiking distance itself. 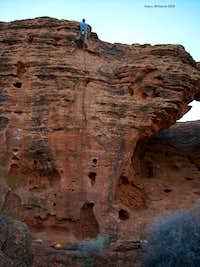 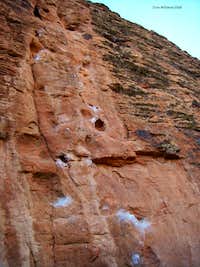 Trey Lizzardos, 5.11d
Few folks really hang out at Turtle Wall, albeit, on our first visit, sure enough not a soul at Chuckawalla, but two prAna reps back at Turtle Wall. The name was derived from the protected desert tortoises of the Red Cliffs Desert Reserve, a 62,000+ acre scenic wildlife reserve set aside in 1996 (and growing-2008) to protect the desert tortoise among other sensitive desert species. But one can also clearly make out a turtle shaped rock formation just to the south, so perhaps that had some influence in the naming process as well. Other creatures protected in the area include the gila monster, sidewinder rattlesnake, chuckwalla lizard and peregrine falcon.

At its angle to the sun, this wall is baking in the morning and has full shade in the afternoon. Despite the shade, being located in the bottom of Paradise Canyon would make this a bad objective choice for the local brutal summers. This rock is softer than most any other St. George rock, thus the 24 hour wait after any precipitation should be weighted even more heavily at this wall. Several of the anchor bolts swayed when I weighted them, due to winter moisture, even though it had not rained in several days.

Red Cliffs Desert Reserve is the cornerstone of three separate and distinct ecosystems, the Mojave Desert, the Great Basin, and the Colorado Plateau. Due to this unique merge, several endemic species, those which can be found no where else in the world, are found in the reserve. Please keep your dog on a leash, as is required by Snow Canyon State Park who manages the Reserve, particularly if they are prone to digging or pestering these creatures. Desert tortoises can actually die of dehydration if they are harassed. 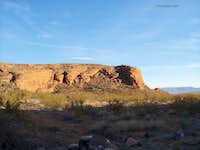 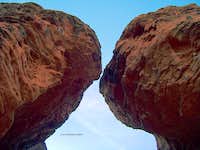 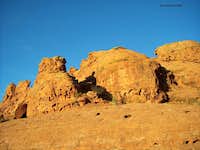 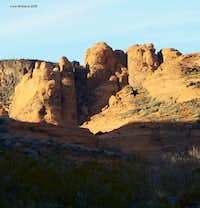 South Face (receives some afternoon sun)
(photo)This is my favorite route at Turtle Wall thus far. Really fun start by traversing with hands only to the right and then kicking and hooking your heel up left, making several large moves on big holds to gain the overhanging portion down low. Then steep, but easier going above. Five bolts to chains.


(photo)Tough, tough start. Todd says to stick clip the 2nd bolt, but the 1st one has been removed, so he means to stick clip the 1st bolt of this line now (2008). Pinch a tiny flake to the right, traverse with a large move to the left onto a large flake. Hook your right heel, rest on a bomber hook and then bounce for a large move above for a positive hold. After all that, it is nice and steep with fun holds. Significant crux move down low is tough to pull off clean the first time. Five bolts to chains.

(photo)So you cruise up micro holds following this closed seam, typical 5.10c stuff until you reach the last bolt. Then your feet run out, but you see this large pocket up and to the right…just as I was about to make a jump for it, it became apparent the first two bolts were brand new (just been replaced 2008) and this last bolt (3 total vs 4 as mentioned in the guide book) needed to be replaced badly. Then the only other climbers at the crag mentioned to me that the pocket is an illusion. Sure enough you will flail if you jump to the pocket. Instead, try to friction your way up straight vertical sand to a much smaller hole above the huge, but sloping imaginary pocket. This is by far the crux and we all thought the route had a sandbag rating compared to the others. Three bolts to shifty rap anchors.
(photo)Only easy route at Turtle Wall. Real nice for the grade though. A bunch of straight arm hanging on sandy, but bomber in cut holes and features. A few varnish features along the way. Three bolts to chains. The coldshuts have been replaced with chains (2008).


(photo)The last route before you turn the corner into the harder overhanging cave routes. Pretty decent start, with the crux move in the middle and an easy finish. That crux move is a stand up to reachy hold, think smooth small varnish features above, and then an exaggerated foot move up and balance your way to a much better position. Cruise on up from there. Four bolts to chains.

Drive north on Bluff Street (Route 18) beyond St. George proper. One mile beyond Sunset Blvd sits a significant trail head with restrooms on the left. Park here and find the trail at the north end of the parking area and follow the trail as it passes Chuckawalla Wall on your right. Continue for approximately a mile on the main trail and keep look out for a “climbers trail” official marker on your left. Before that marker, there is an official Turtle Wall marker. You can follow either to the wall. I am not sure why they have two official ones, basically makes a loop. You are entering the Red Cliffs Desert Reserve. There are trail signs posted and pets are allowed on leash on this trail as well as horses. We actually had people on horseback watch us climb in this area before. It is imperative that you stay on the existing trails to avoid damage to the desert terrain, damage that can last for much longer relative to other environs.

Black Rocks is closed March 15-June 30. I have seen Turtle Wall closed periodically as well. This whole area is currently closed to new development and/or new routes must be applied for through Snow Canyon State Park who help manage the Reserve. Parking is allowed in designated areas only. Overnight parking for backcountry camping, hunting, or shuttling is permitted. No camping is permitted in the parking areas. All pets must be on a leash to prevent wildlife disturbance and to avoid conflicts with other people. In the Lowland Zone, campfires are restricted to established fire rings within official campgrounds. Campfires are allowed in the Upland Zone, but may be subject to closures for high fire danger.

The rock at Turtle Wall is some of the softest in or around Saint George. As with most any climbing on sandstone you should avoid climbing for at least 24 hours after any rain (if not longer in this case).

My favorite place for dinner is the sushi bar at Benja's Thai & Sushi, 2 W. St. George Blvd. The best breakfast and coffee can be had at Jazzy Java, 285 North Bluff Street. The Outdoor Outlet is one of my favorite independent climbing stores anywhere. They know the climbing area well and have a great selection of gear at competitive prices. Ask for Bo.