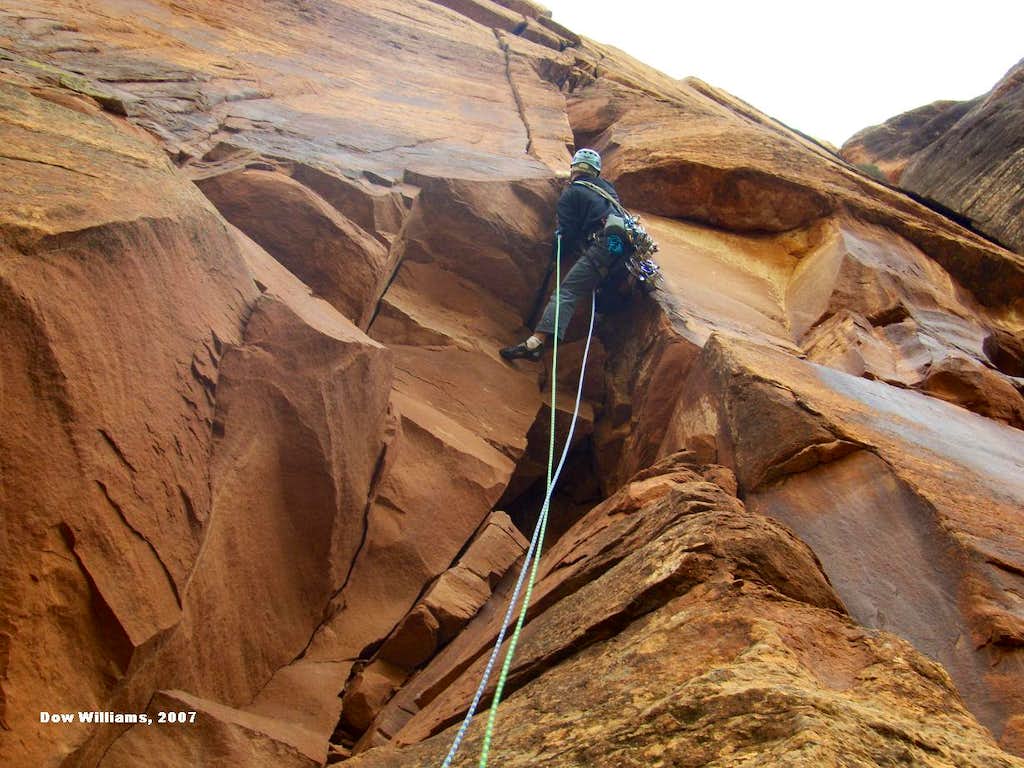 Ignore anyone who tells you this was ever a 5.9! even by old school standards. The roof move required to get up and into the sustained crack above is as tough a move as any required on the free single pitch crack routes in Zion. The wide right crack offers no assistance through this crux. Once you complete the crux move, you will continue on a sustained finger crack above. It is easy for your cams to become flared in this crack at the start. Another bolted station awaits you above and again, double ropes are needed for the rappel. Great White Throne Base Routes, Zion Naional Park, September, 2007
« PREV NEXT »

I wish we had this kind of route in France !

I agree, nice route, but I have to be honest, I suck at crack climbing...it is an acquired talent and I spend so much time on multi-featured face climbing in Canada, that my sustained crack style leaves something to be desired. I always look like a crack climber when I get back north though...cheers

ahhh, and bob thought he had your illness cured...I told him there was no way in hell you could keep from not spraying, it is all you do, you sure in the hell don't climb....spraying on routes of which you have never been on...pretending to know people you don't know...the biggest poser on this thread who called his wife to have her call SAR's to rescue you from a frigging scramble...then dishes on others who have lost their life because they can't respond to your crap...of course when their relatives respond, you shrink like the poser you are....as always you know shit about these routes Rick and you damn well don't know what Galen Rowell thinks...three of us, all locals, one an active guide, all led it and it is modern 5.11...(there is good chance a piece is missing which is common in Zion, not that you would know shit about it) get your ass on it and prove it with photos, because you have zero credibility here....poser dude

what is hillarous is that I am normally accused of sandbagging my descriptions...you are a joke mannnn..get a friggin life vs trying to live off of mine

Rick Poedtke (the chief) has changed every one of his comments above....unlike the forums it does not show "edited"....you are a winner mate