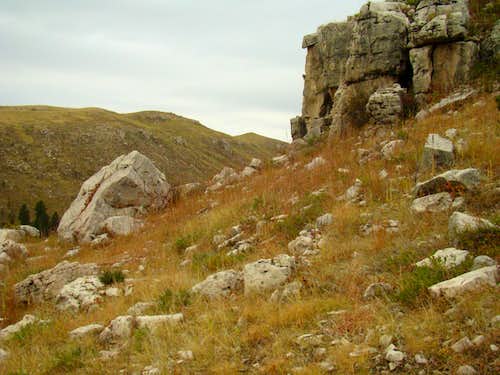 The rocky southern slope of the Twin Sisters Range

Bushwhacking in the Black Hills has become rather daunting at many locations, attributable to deadfall from the effects of pine beetle kill, forest fires and the devastation left from Winter Storm Atlas. So, the hike up to the highpoint of the Twin Sisters Range is rather refreshing, due to the lack of deadfall on the rocky southern slopes and summit area. The summit offers great views in all directions. Readily identifiable peaks include Mount Coolidge, Rankin Ridge, Parker Peak, Battle Mountain and the Seven Sisters Range. Lists of John gives the highpoint a prominence of 300 feet, making it the 154th ranked summit in the South Dakota Black Hills. The Twin Sisters Range is not to be confused with Twin Sisters North and Twin Sisters South peaks, farther northwest in Custer County; or the Twin Sisters West and Twin Sisters East peaks to the north in Pennington County. Most of this small range lies just past the western boundary of Wind Cave National Park, with just the eastern end actually in the park (to the north of Elk Mountain). The range is bounded on the north by the Cold Spring Creek valley and on the south by the Cottonwood Creek valley. Most of the Twin Sisters Range is now devoid of trees, though ponderosa pines are again spreading up the slopes from the creek valleys below. There are some aspen, but they are rather scarce. Wildlife is abundant in the range, with plenty of mule deer in the area, as well as pronghorn antelope and elk. Coyotes are also found here, along with occasional mountain lions. On my first visit, though, all I saw were rabbits and bones from a deer killed by a predator.

To get to the Twin Sisters Range, travel south from Pringle, South Dakota on Highway 89 for 1.7 miles to Song Dog Road (on the left). Turn onto song Dog Road (FSR 682.1) and travel southeast 2.9 miles to Forest Service Road 373. You can park anywhere along the road wherever it will not obstruct traffic. 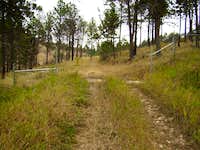 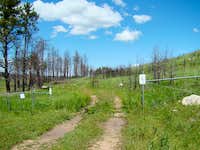 Forest Service Road 373 is marked “No Motorized Vehicles”. This may be due to the fact it passes through the National Park Water Supply area just a short distance down the road. So you will have to park and hike east approximately 1 mile to the best area for a bushwhack route along the southern slopes. That starts about 100 yards east of the east gate on FSR 373. Much of the Twin sisters Range northern slopes are on private property, and they would not be very desirable anyway, due to all the deadfall on the north side of the range. It is about .4 mile to the summit from FSR 373 using the route outlined on the map above. Of course, you can bushwhack an entirely different route from FSR 373 if you choose. 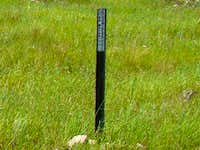 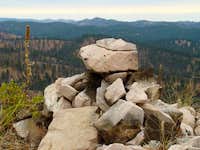 For whatever reason, the southern slopes and summit area have relatively little deadfall and are all on public land. Loose rock may prove to be your greatest concern. Keep a watch out for rattlesnakes if you are not hiking in winter. There is a small cairn at the summit. From Song Dog Road to the summit, you will gain about 400 feet in elevation.

Though FSR 373 passes through the National Park Water Supply, most of the Twin Sisters Range is on national forest land and subject to their rules. The greatest concern usually is about illegal campfires and fireworks. Leaving trash behind or illegal use of firearms can also be cause for an unpleasant encounter with forest service officials. 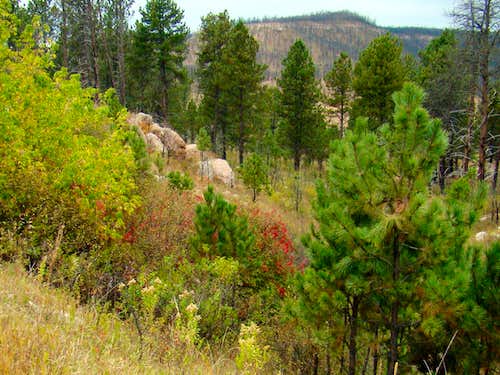 This area is open year-around, except when posted for weather or fire emergencies. The forest is managed by the National Forest Service Office in nearby Custer. You can reach them by phone at: (605) 673-9200. Winter blizzards and summer lightning will provide ample incentive for hikers to choose a better time to visit the Twin Sisters Range. You can check on the latest conditions and forecasts at this link: Twin Sisters Range – Wind Cave National Park Weather Hunting seasons can pose some hiking risks, so if you must hike then, please make yourself visible by wearing plenty of bright orange. You can check for South Dakota hunting season information at this link: South Dakota Hunting Seasons Information

The Twin Sisters Range is found in the Pringle Quad on USGS maps. Forest service offices in the area sell good maps, including their Black Hills National Forest Map and the National Geographic Black Hills South map. They also offer a free Motor Vehicle Use Map for the Mystic and Hell Canyon Ranger District back roads. 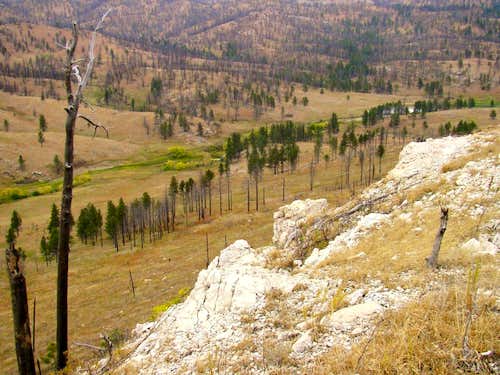 Besides your back-country camping options in the Black Hills National Forest, there is camping and lodging nearby at Wind Cave National Park, Custer State Park, Cold Brook Reservoir, in and around Custer or at Hot springs. For visitors’ information at any of those places, click on your link of choice below:

The Black Hills National Forest allows back-country camping except where posted, however campfires are prohibited. You can access their camping regulations at this link: