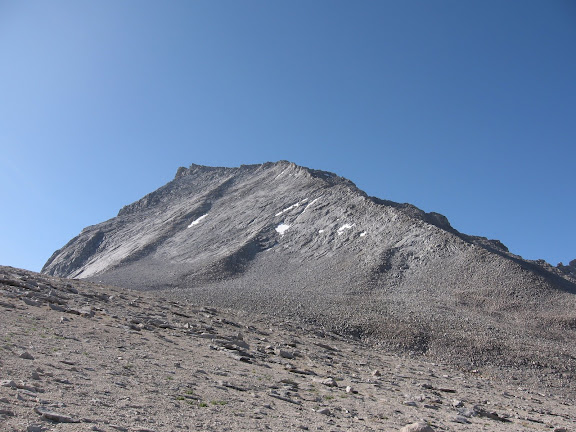 
The main dish of the weekend was the planned dayhike of Mt Tyndall, organized by Corin of the peakbaggers group. The hike starts at just a little bit over 6000 ft, follows a long slog along trail up to Shepherds Pass at 12000 ft, then cross-country and class 2/3 climbing to the summit of the 14018 ft summit of Tyndall. Sounds like fun?

The main issue for me, as detailed in my ascent of Mt Whitney last summer, was dealing with altitude mountain sickness (AMS). Given that a hike of Tyndall is harder than Whitney in multiple ways (including energy and climing coordination), I was quite conscious of trying to improve my handling of AMS.

The first step was to try to hike at altitude the day before, which I did going to Kearsarge Peak.. I was a bit concerned coming off Kearsarge, as I did get a headache and didn't feel great overall. I didn't think that was a good sign, but I figured it may still help overall for the next day.

So we camped at Gray Meadows, which is only around 6000 ft in altitude and not very useful for acclimitizing, but a place to sleep nonetheless. We woke up, drove over to the Shepherds Pass trailhead, and began hiking a bit after 3:30 am. This is the earliest I've ever started a hike, but in the end it was probably the perfect time to start. Plus, we had a full moon. 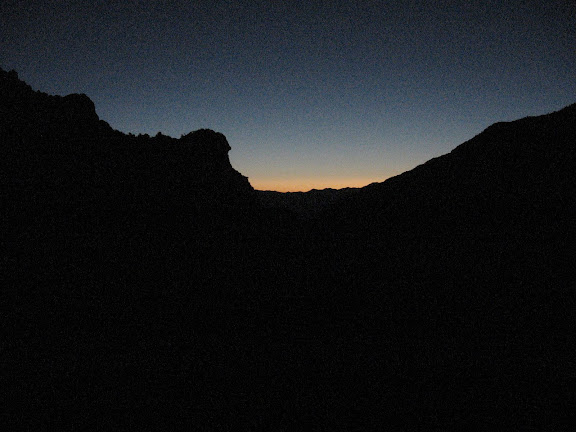 The Shepherds Pass trail begins in Symmes Creeek, with 4 creek crossings within the first mile of hiking. Then, the trail switches back up the south side of the creek, going from ~ 6300' to 9000' ft at a saddle on the ridge on the south side of the creek. We got to this point in about 4.5 miles. Just at this point it was starting to get light out.

The trail then crosses over into Shepherds Creek. Unfortunately, it descends about 500 ft in 1 mile, back down to 8500 ft, before beginning to ascend. I moved very quickly over the descent section as I wanted to save more time for going slower on the ascent to not get too sick.

When the trail goes back to ascent the switchbacks are not too steep and go pass around a lot of manzanita. After passing around a few ridges, you'll see a forested area above which is Anvil Camp. All the trail before Anvil Camp is generally not that steep, so it was okay to keep a moderate walking speed and not exert myself too much. I was trying to keep my heartrate (coarsely, by listening to a few pulses) around 120-140. 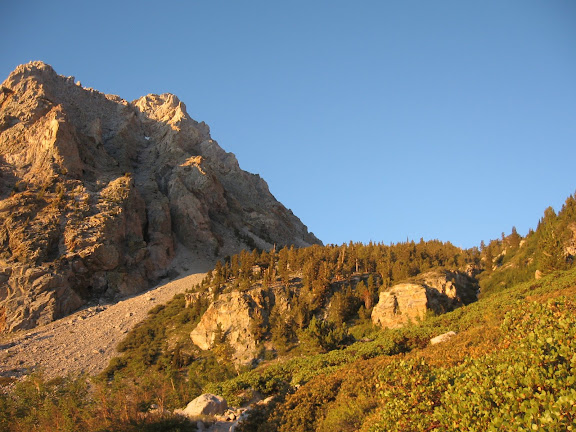 After Anvil Camp, the trail gets steeper. Now I had to force myself to slow down so not to ascend in altitude too quickly. The terrain begins to lose its flora and gets rocky (around the Pothole I suppose). Here the trail did some slight roller-coastering, as we kept getting closer views of Shepherds path above us, until we reached its base. 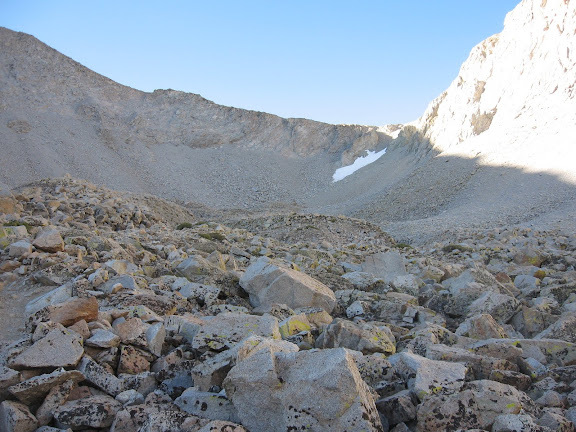 At this point I was with Eric and Frank. We rested for a few minutes, descended a slight bit, then followed the rocky trail switchbacking up to the pass. Again I was very conscious of my pace, as well as trying to breath deeply. Luckily, we only needed to gain 500 ft to the pass. 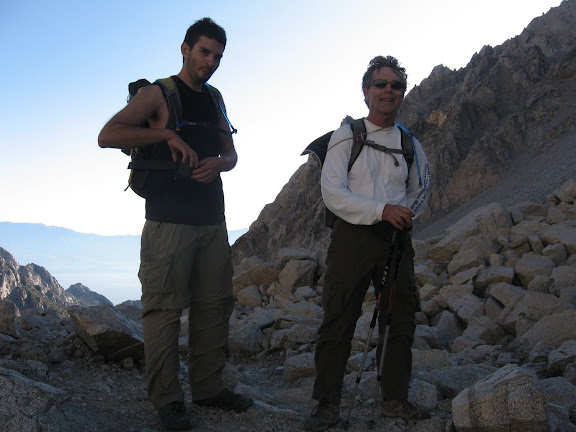 At Shepherds Pass we caught our first glimpse of Mt Tyndall. My first impression certainly did not think it looked easy, but certainly not as bad as Mt Williamson looked. Although cold and windy, we took another break at the pass and waited for a few others to arrive.

The trek cross-county to the base of Tyndall was not too bad with a gradual incline. So far, I was feeling quite good, much better than any other time at 12000 + ft. 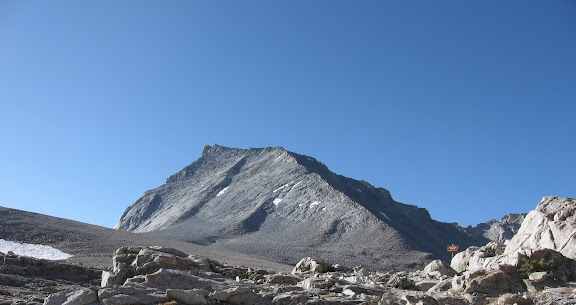 There are several ways to ascend Tyndall. The two ways I read about were the north rib or the NW ridge. From what I read it seemed the north rib was the better route, so we headed in this direction. Near the base, the terrain turns into a rock field, and around 12700, the hike turned into a climb.

The rib is generally composed of solid rock for class 2/3 climbing. It was best to mostly stay on the right side of the rib where there was consistently solid rock slabs to use. I felt very comfortable with this rock which seemed to give more security from falling than the flatter areas. 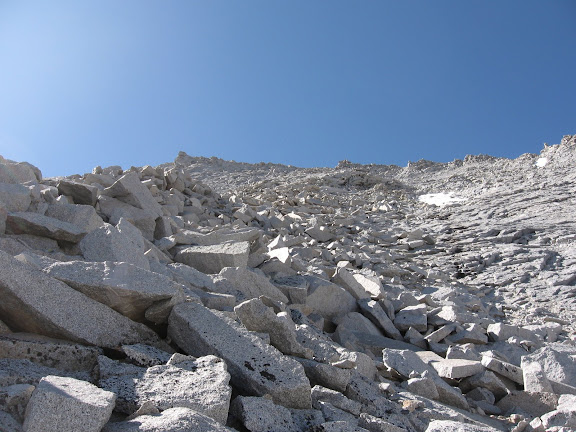 I was making good progress ascending, but took a lot of breaks to make sure I wasn't ascending too quickly and breathing deeply. I was up past 13000 ft and not feeling any AMS effects yet. I was especially happy not to be dizzy on such terrain.

At about 13300 ft, the rib continues straight up, but I also saw a nice path of rocks heading SW. I figured that I could just take this to the summit ridge, then traverse over east to the peak. I based this on the fact that the other route (NW ridge) would do the same thing.

Well, I easily got to the ridge, but to my dismay I was brought to an exposure I had never seen before! The south side was a complete dropoff, and the side I had come up was very steep. Plus, there only a few moves to try to get over the first rock obstacle heading toward the summit. However, the next rock obstacle was just too imposing for me. There was just this huge rock that was easily class 4+ to even try to get on top of it. There was no way around the south side since it just dropped off, and no way to really hug around its north side since it was quite steep too. 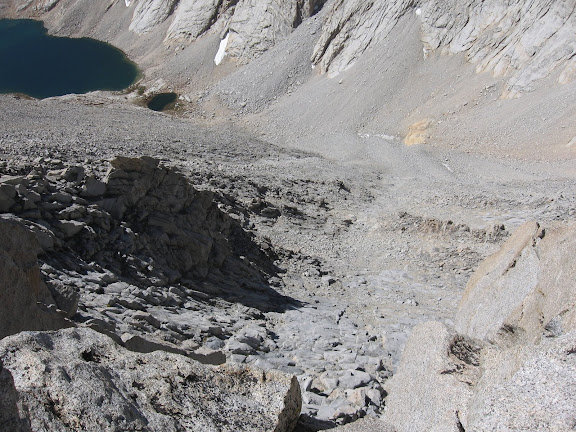 Although I was in a fine position to just backtrack I still never felt that tense on rock before. I think just the exposure, plus being at 14000 ft, plus gusting winds made it worse. But I ended up backtracking down, continuing up the north rib. I went straight up, even doing a class 4 move to pull myself up to the ridge using just my arms. From there, it was an easy boulder traverse over to the summit (the exposure was significantly reduced on this part of the ridge). 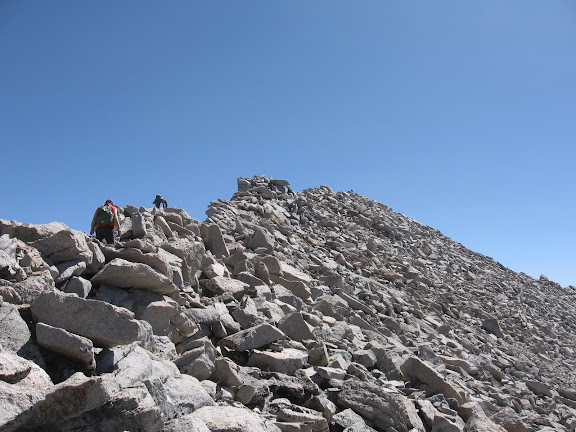 The views, of course, were expansive. Unlike with my Whitney experience, I was able to relax and soak it in. I did not feel any sickness, a huge turnaround from the last time! I was also still motivated to get up on the summit block which had huge exposure on the other side (northeast).

I believe 9 people in the group made it to the summit, a pretty large number for a dayhike. Big congrats to everyone. 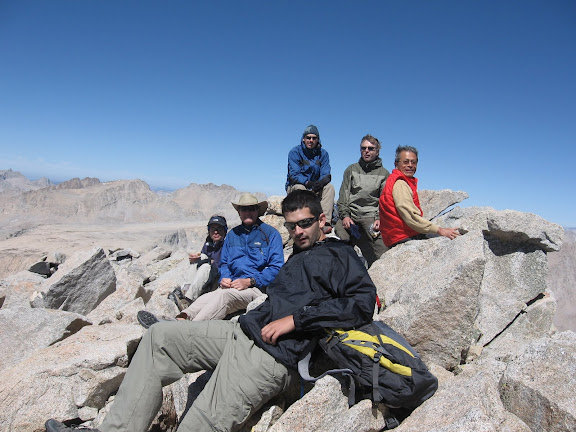 THE BEST ROUTE UP THE NORTH RIB: If you look at my gps track, you'll see the multiple paths going up and down to the summit ridge. Stay on the west side of the rib all the way until 13800'. There, you'll see a wear pattern heading SSW; follow this to the ridge. This is basically used instead of heading straight south to avoid the difficult few maneuvers I had to do.

That is the path I took to drop off the main ridge. From there, I downclimbed the rocks on the north rib just as in the ascent.

The way back was pretty uneventful, other than the fact that it was freaking long. I arrived at Shepherds Pass at 1:30, and didn't get back to the trailhead until 6:30. I stopped a bunch to wait for people, so perhaps I could have cut off 30 min - 1 hr - but I didn't care as I just wanted to give my feet a rest! Turns out the trail up to Shepherds Pass is at least 10 miles, somewhere between 10 and 11. And with the extra 500 ft back up to the saddle plus ups and downs, this was a 9000 ft monster. 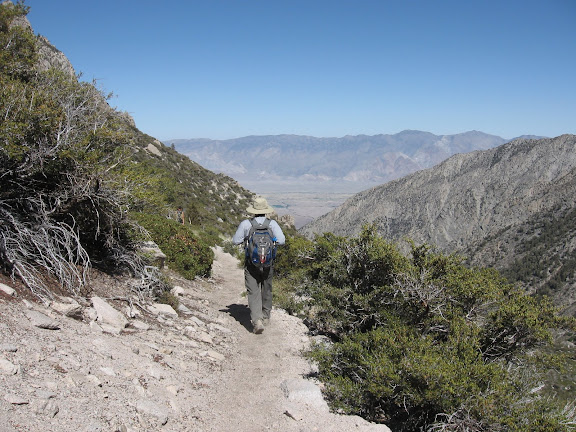 In the end, I was quite pleased in that I was able to control my pace enough to not get sick at all. Maybe, just maybe there's a dayhike attempt at Mt Williamson in the future (shudder). Have you seen that freaking mountain? 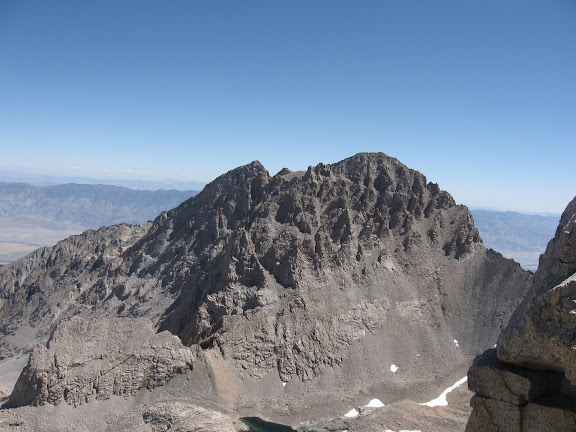 Post-Hike: I looked up some trip reports on Summitpost and found one that went up the NW ridge. They had this to say:

Now came the part we'd wondered about—how to get around the gendarme at the top. Turned out we weren't there yet. The east-west notch in the NW Ridge near the top is only a window to where you want to go. Following the ridge's top rocks to the right (still on the NW face), we came to the true intersection of the NW Ridge with the westerly ridge, and saw the gendarme guarding the advance up the summit ridge. We'd read nothing and talked to no one who knew exactly how to get around this thing in class 2 fashion. So we chose the left and traversed the high regions of the class 3 slab over to an obvious use trail, down this trail to the North Rib, then up the rib to a chute leading back up and a bit southwest to the summit ridge. I knew how to do this because that young woman climber was ahead of me, and I asked directions!


Well that sounds exactly where I found myself! So there seems to be no reason to use the NW route.

up to Shepards Pass from Zé Apelido on Vimeo.


bunny? from Zé Apelido on Vimeo.