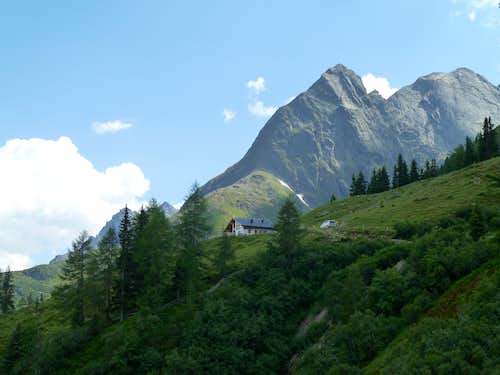 The Äußerer Hahlkogel is at the most northern end of a ridge extending from the Breiter Kogel (3256m). From the valley, the peak is visible as a prominent pyramid near the village of Huben. However, the peak is not as prominent in the ridge, because it is in fact one of the lowest peaks. The twinpeak Innerer Hahlkogel, with an elevation of 2739m, and the highest point on the Ötztaler Geigenkamm, the Hohe Geige (3393m) are not far away. The view towards the "Inneres Ötztal" (south) is thus not spectacular, but this is completely made up for by the fantastic view towards the Stubai Alps and the "Äußeres Ötztal" (north).

Längenfeld and Huben both lie in the Ötztal valley in Tirol, Austria. The Ötztal valley is easily accesible by car from the Inntal highway (Bregenz-Innsbrück). There are multiple parking options in the villages. There is also well organized public transport to the entrance of the Ötztal at Ötztaler Bahnhof (train), and further into the valley by bus. 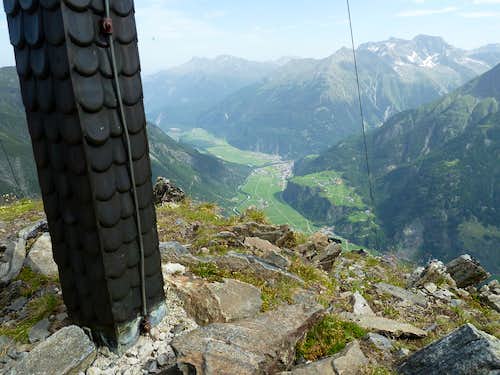 View from the summit towards Längenfeld
The normal route up the mountain starts in the village of Huben (Längenfeld) where one leaves from the Ötztaler Naturcamping in southern direction. Signs will mark the route to the Hahlkogelhaus 2042m (and most of them even the Hahlkogel). If the Hahlkogel is mentioned on signs, it refers to the Äußerer Hahlkogel, and not to the Innerer Hahlkogel since the Äußerer is generally just called Hahlkogel. There are multiple paths that go up the mountain in this direction, but the best is to pick the path that is maintained by the Am Feuerstein hut. One takes the route for about a half hour, before leaving it for the steep trail to the Hahlkogelhaus at a point called Sattelkuche. The ascent goes through the forest on a path unofficially called "Der Weg der Spruche," because there are various signs on trees with funny or motivational quotes in German.
After approximately two hours one arrives at the Großeben where the Hahlkogelhaus (2042m) is clearly visible. From here one can see the summit of the Äußerer Hahlkogel still more than 600 meters above. From the hut the route goes first over the grasslands of the Großeben in southern direction. Then at a sign the path turns to the right, a little bit steeper, to the foot of the peak itself. At an elevation of 2300 meters the route becomes much steeper in the direction of a small corridor in the ridge between the Innerer and Äußerer Hahlkogels, right next to the Mitternschneid (2639m). From this point the last hundred meters in height are a bit of a scramble so be aware of loose rocks. There are no technical difficulties, but it can still be a little exposed at times so one has to ascent with confidence. 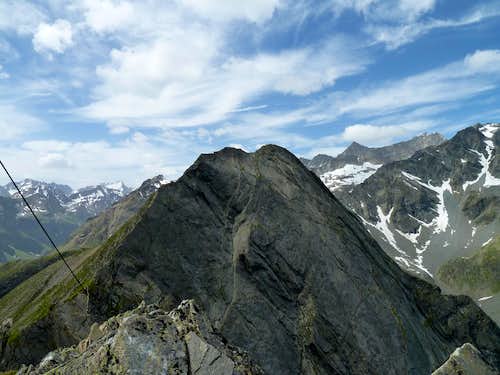 View to the Innerer Hahlkogel and the South
The descent generally follows the same route as the ascent. There are not easy routes down the summit from any other side, because they are mostly rockfaces. (this offers a great opportunity for those interested in climbing the mountain from the other side, see the Alpenvereinsführer by Walter Klier for routes up the mountain (difficulty up to V+))

The mountain is most often climbed in summer. (June-August)

Camping is generally not allowed in the mountains, but a single night may be permitted near huts. There is a great campsite in the village of Huben called Ötztaler Naturcamping (see the link section for more information). They offer great rates, it is basic (do not expect swimming pools etc.), but it has comforts such as (clean) showers, bathrooms, and a little hut where there are some tasty things on the menu. Furthermore, the Hahlkogelhaus (Ebenalm) has limited space to accomodate overnight guests.