Peter and I met at Loveland Pass to climb Peak 12,585. I don't know how I did this, but somehow I ended up leaving my boots at home. Bummer. We climbed Peak 12,585 and spent some time on top and then headed back. It was chilly and windy, but not bad for February. We would have preferred to go farther and climb more peaks, but my toes were cold. The views from the summit were really nice though.

After work I climbed Peak 12,585 from Loveland Pass. I was hoping it would clear up some, but I did the entire route in the ice fog. I reached the summit after sunset, but didn't get a view. Someone else was climbing the mountain as well, so I guess I'm not the only one who climbs peaks at night during an ice fog!

I walked down in the dark. The conditions were pretty snowy and icy.

Starting a sunset, I hiked up Peak 12,585 from Loveland Pass. I saw lots of Pikas and reached the summit in the dark. It started snowing hard and I descended through the snowstorm. The snow didn't stick though.

I climbed Peak 12,585 after work. It rained a little, and it was breezy and cool, but it wasn't too bad. I saw several marmot and pikas along the way. I reached the summit just after sunset.

After work, Kim, Shaylee, and I took a hike up Peak 12,585 from Independence Pass. The weather was good and we saw many marmots and pikas.

It was also the 24th anniversary for Kim and I!

After working a shorter than yesterday 12 hour work day, I drove to the top of Loveland Pass (from Frisco) and climbed Peak 12,585. There were more marmots than I have ever seen anywhere. I counted 12 marmots, six of which were juvenile fur balls. There were many Pikas left.

I reached the summit right around sunset and it was still light when I got back to the vehicle.

After work I drove to Loveland Pass and climbed Peak 12,585 via the west ridge. After that I hiked to point 12,414. I saw a few pikas and one runner. It was a little chilly with the wind, but the weather was good. I arrived back at the vehicle around sunset.

Not wanting to face the after ski I-70 traffic I stopped at Loveland Pass to do this hike after a full day of tele skiing at Loveland Ski Area.

Quick jaunt from Loveland Pass just to get an above treeline fix after work.

Quick hike up and run down after Sniktau, Cupid and Grizzly. Rested little bit in a car, and left Duchess inside the car.

adam and i scooted up this peak from loveland pass. easiest 12er in colorado!

Did this short hike in the afternoon. Nice views. Counted 28 Mountain goats about two miles away with the binoculars. 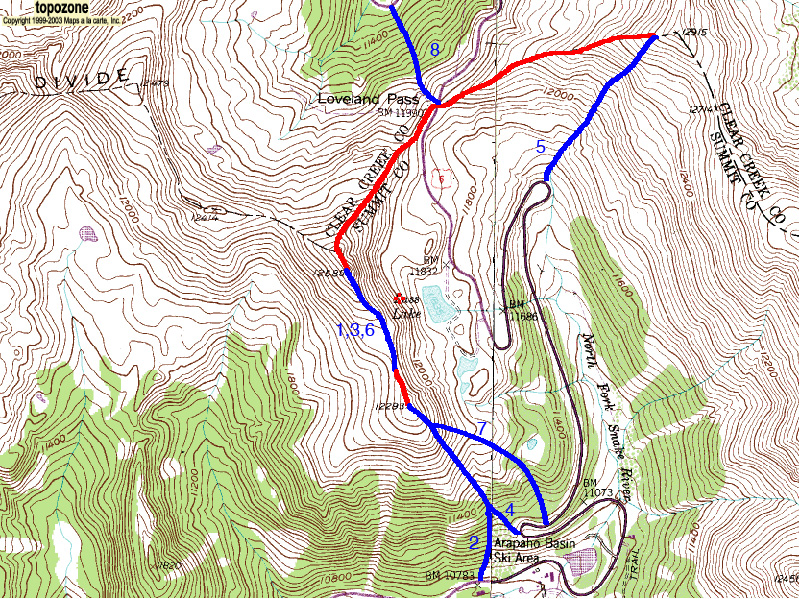 Quite possibly the easiest "Millennial" in Colorado! A nice place to take in a view from above the pass none-the-less.

I've been up there several times. Nice views from the summit of the surrounding mountains.

This was a pleasant, quick jaunt from Loveland Pass. Visited this peak after finishing nearby Kelso Mountain quickly. Chatted with a runner on the summit who was watching his wife bike the Triple Bypass race!