UN 9146 - Unofficially but popularly known as "Mount Ian" - is the highest point on a lofty ridge which runs north from Mt. Wrightson. Wrightson itself is the highest peak in the Santa Rita Mountains, a range just south of Tucson, Arizona. Its lower neighbor, Mt. Ian, is not quite as spectacular a peak from most angles. In fact, it is sometimes difficult to tell exactly which spot on the ridgeline is the actual high point - particularly from far below! Furthermore, many hikers and climbers overlook this mountain while concentrating on its higher and more prominent neighbor. 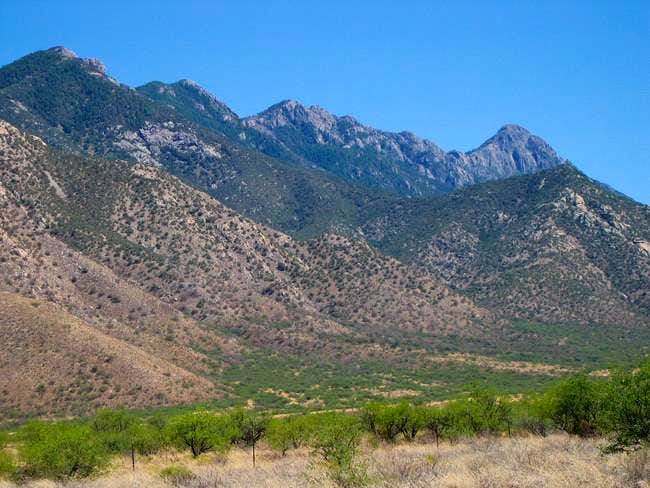 The Santa Rita Mountains. Mt. Ian is in the middle, at the north end of the ridge connecting it to Mt. Wrightson (at right).


Nevertheless, 9,146-foot Mt. Ian is the second tallest mountain in the Santa Ritas and the third in the Tucson area. The only higher summits are Mt. Wrightson itself and Mt. Lemmon, which is located north in the Catalinas. And reaching Mt. Ian's summit is no small undertaking; it requires a long, steep hike that is all too often cold, windy, or both. Weather nonwithstanding, Mt. Ian offers a great view of Mt. Wrightson, and even better ones of the Catlinas and Tucson to the north. South lies Mexico, and far to the west the spire of Baboquivari Peak can also be seen from the summit.

From Tucson, head south on I-19 toward Nogales and the Mexican border. About thirty miles from Tucson, take exit 63, which is Continental Road. Go east on Continental for about a mile and then turn right on White House Canyon Road. There are signs that direct you toward Madera Canyon both from the freeway and at this intersection. Don't be fooled by the absence of any true canyons in the area; that's the name that's been given to this whole area.

Once on White House Canyon Road it's a little over 11 miles to Madera Canyon. After passing the information station, stay on the main road; it will finally dead end at a loop, a mile or so later. Begin to loop back around and you will find yourself in a large parking lot with maps and a restroom building. The trailheads for the Old Baldy Trail and Super Trail - both of which will lead you toward Mt. Ian - are accessed from this parking lot.

Mt. Ian is in the Madera Canyon recreational area, which is a fee area. You can pay $5 per vehicle per day and get a tag that is good for a week and also gets you into a number of other Tucson recreation areas, such as Mt. Lemmon and Sabino Canyon. Or you can pay $20 for an annual pass.

Mt. Ian can be climbed at any time of the year, but snow and bad weather may necessitate the use of winter gear during the months of November, December, January, February, and even March. Furthermore, the summit of Mt. Ian may be safe from Tucson's scorching heat, but during much of the summer the lower part of this climb will be miserably hot and buggy to boot. The recommended times to climb are therefore spring and fall. The summit of Mt. Ian

Due to the character of the ridge extending north from Mt. Wrightson, there has been some confusion about the actual location of Mt. Ian. There are at least two high points on the ridge and it used to be necessary to climb both of them in order to find out which was the highest. Now, however, these two highest spots both have registers.

When I last visited the summit, Mt. Ian itself still had a strange summit register - a notebook that proclaimed "Rice Peak" on the cover. Luckily, a number of summiters have noted in the register that this is actually the summit of Mt. Ian. All doubt is removed if you're willing to hike further north to the next high point on the ridge. Here there is a wooden sign stating "Rice Peak" and a register which says the same. It's often hard to tell the higher of two summits if you climb only one of them, but visit both of these and it can be seen that "Rice Peak" is slighty lower than Mt. Ian.

While Mt. Ian has enough prominence and distance from Wrightson to be considered a separate peak, no other point along this ridge - including "Rice Peak" (which is about 9100 feet in elevation) does.

*** As of this writing (October 15, 2005) both the Old Baldy and Super trails were closed due to a damaging fire which struck the Santa Ritas in summer 2005. The rangers I spoke to did not have an estimated date for the re-opening of the trails. ***