The Gore Range/Solitude Massif
”In my opinion, the two most rugged mountain ranges in Colorado are the Gore Range northwest of Dillon Reservoir and the Needles Range in the remote San Juan Mountains.” -John Fielder-famous Colorado Landscape photographer.

"Outpost Peak"
Inspired by an in your face view of the northeast face of “Outpost Peak” from the lower slopes of “East Partner Peak” it is safe to assume I’ve had a little problem getting this mountain out of my head for at least a year. Not that I was losing sleep over it; well… maybe a little. Easy winter access and the potential for big views of some of the Gores most beautiful mountains may have been the real reason for my obsession.

UN12,362 or unofficially named “Outpost Peak” separates two beautiful drainages, the Booth Lake Drainage and the Pitkin Lake Drainage. “Outpost” has a very rugged north ridge, which connects to “West Partners” south ridge, in addition to very steep east and west faces and a short but direct south ridge that terminates at I-70 and the Pitkin Lake Trailhead at 8,470-ft. 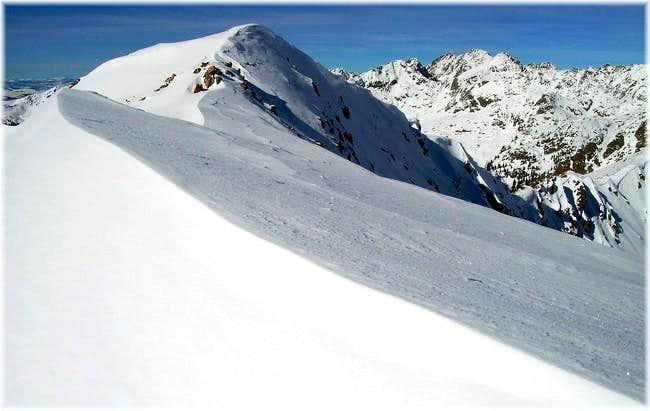 Outpost Peak” makes for a safe winter climb. Located across the I-70 corridor from the mega ski resort of Vail, “Outpost Peak’s” direct south ridge gets all the southern exposure that makes Vail a ski area. While the northerly aspect of Vail keeps the snow from melting quickly, “Outpost’s” south ridge definitely gets sun, thus creating sun crust and snow consolidation, which helps expedite climbing while minimizing the post holing that so many of us fear when hiking in the winter. Sun-crust is also the stuff that creates the dangerous layers that trigger avalanches. Consecutive sunny days, followed by a heavy snow makes for dangerous avalanche conditions, but in Outpost’s case, shallow snow depths and thousands of aspen trees help anchor any steep snow that may be considered too steep for safely traveling during the winter months.

In an effort to spy a winter safe route up “Outpost Peak” a climb up the neighboring Bald Mountain was in order three weeks prior. Armed with revealing photos from Bald Mountain and first hand knowledge of the immediate area snow conditions, Jon Bradford and I experienced a route with uncanny snow similarities of Bald Mountain’s southwest ridge. A potent combination of strong teamwork, solid route finding and perfect weather made our ascent successful. “Outpost Peak’s” winter route is shorter in total distance than Bald Mountajn’s southwest ridge, however it is much steeper and potential avalanche danger lurks anywhere away from the direct south ridge route on “Outpost Peak.”

The route can be sectioned into three benchmarks. First, the lower slopes are steep and laden with trees, which anchor any steep snow: no avalanche danger. The middle slopes are gentle. Lastly, prevailing winds that scour most of the south, southwesterly ridges in the Gores, blast the upper slopes above tree line. Thus, the upper portion of this route is safe from avalanche danger as well.

Locating the Pitkin Lake Trailhead (8,470-ft) is easy. From Denver, take I-70 west, past the Eisenhower Tunnel and on to the popular ski towns of Dillon and Silverthorne. Continue past Copper Mountain Ski Resort and on to Vail Pass. From Vail Pass, descend down to the city of Vail, Colorado and take exit 180, your first Vail exit on the right. Turn right and quickly make another right and drive about .2 mile east. Look for the trailhead on the left next to some private condos.