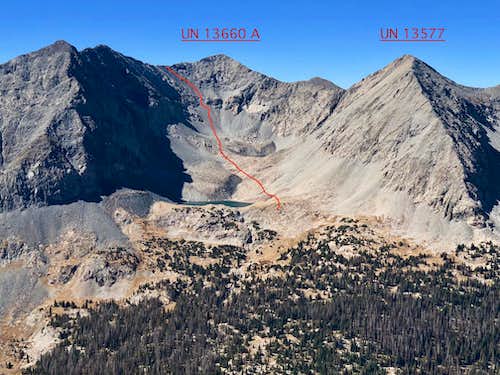 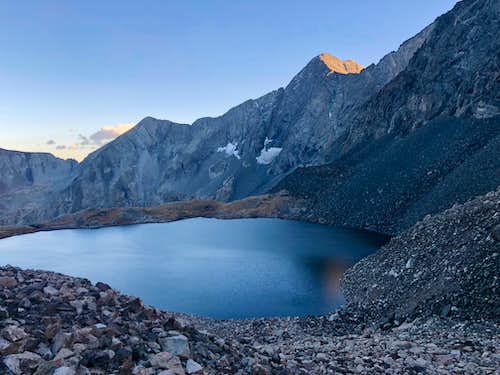 Lily Lake and north face of Blanca Peak
Unnamed 13660 A is a bicentennial peak located in Sierra Blanca of Sangre de Cristo Range. A because there is also Unnamed 13660 B Peak located in the Sawatch Range. Why Unnamed? Colorado has so many peaks and many are unnamed, but still ranked peaks. (There are 584 ranked peaks between 13,000 to 13,999 feet in Colorado!).
Unnamed 13660 A combines nicely with centennial peak California, Unnamed 13577 (tricentennial peak) and finally Unnamed 13660 (bicentennial peak). I liked this combination since it starts easy, follows a trail and avoids a scree on the way up. You get to summit two other peaks along a long ridge with excellent views in all direction. The descent from UN 13660 is nasty and involves "skiing" on a steep scree down to Lily Lake. There is a trail from scenic Lily Lake to the parking lot.
The views from the summit of UN 13660 A towards north face of Blanca Peak, Elingwood Point and Little Bear Peak are spectacular.

Lower Huerfano Trailhead: Great if doing a loop California Peak, UN 13577 and UN 13660 A. Take exit 52 from Interstate 25 north of Walsenburg and go 0.3 miles south towards Walsenburg. Turn west onto Colorado 69, go 25.1 miles northwest to Gardner (not much here) and continue for additional 0.7 miles to the far side of town. Turn west onto the Redwig spur of Colorado 69 (paved) - well signed for Mosca Pass, Lily Lake TH and Huerfano TH. If coming from the north of 69 (from Westcliff), there is no sign for Lily Lake.

Go straight, the road eventually changed into a dirt road. The turn offs are well signed. The part of a road passes through a private land, do not trespass outside the road. The last 4 miles of the road become rougher and it is better to have a high clearance vehicle (Subaru could make it). The trailhead for Lower Huerfano/Zapata trail is well marked, there is a small parking lot (only about 2 cars, but just about 100 meters higher up is plenty of parking). The mile marker from the turn off from Colorado 69 is 21.2.
Upper Huerfano Trailhead: This trailhead is at 10,680 feet. From the Lower Huerfano Trailhead at mile 21.2, continue south on the road and reach the trailhead at mile 22.3. There are multiple campsites along this last mile of the road. The road gets steeper and rougher here - definitively high clearance 4 WD vehicle. The trailhead is large and well signed. 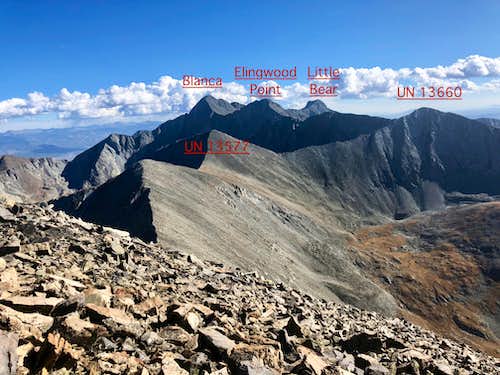 Peaks as seen from California Peak 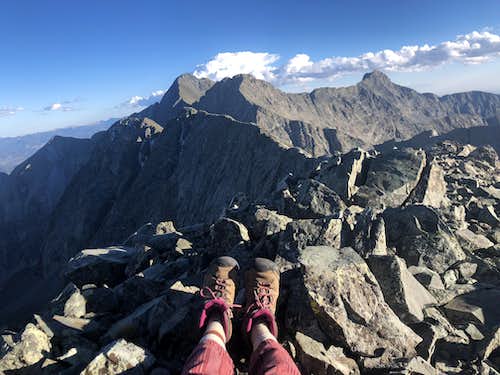 Summit rest on UN 13660 A
As any mountains there are many ways to reach its summit. I will describe it as I took it, but obviously if you have done already California Peak, this route may seem redundant and you may choose to go directly up from Lily's Lake. This would be a shorter option, but does involve steep scree, unless you choose to hike up in early spring when the northeast facing slopes would be still covered with snow.
I started at Lower Huerfano TH and followed a nice trail - class 1 to the saddle. From the saddle I left the trail and followed north facing grassy slopes of California Peak to its summit. This section is easy, but dragging. The views of Huerfano Peak across the valley are amazing. Once on the summit of California Peak you can see your next objective - Unnamed 13577 and behind it Unnamed 13660A. Staying close to the ridge is the best, you can bypass unranked point 13440 between California and UN 13577. The descent from 13577 into the saddle between it and UN 13660 is steeper than previous going, but nothing more than class 2 in difficulty. The sections of the ridge up UN 13660 seemed to be at class 2+, but most of the way was class 2. The summit had a small cairn, no summit register. The views of 14ers: Elingwood Point, Blanca Peak and Little Bear are spectacular!
Descent I chose to continue to a small saddle between UN 13660 and Elingwood Point and descent to the upper unnamed lake above Lily Lake. This section went relatively fast by skiing the scree. Lower down hoping on sometimes loose rocks brought me down to Lily Lake where I intercepted a trail to Upper Huerfano Trailhead and took the road (cca 1.1 miles) down to Lower Huerfano TH where my car was parked. 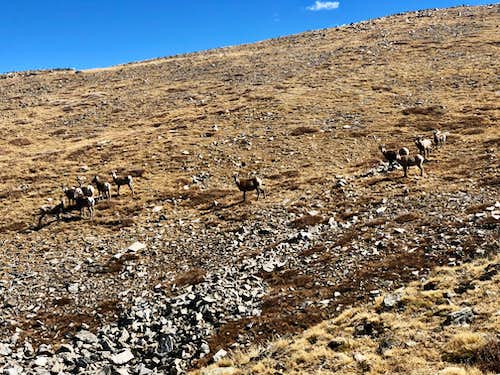 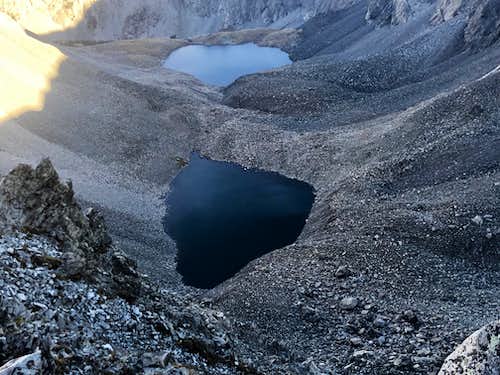 Lily Lake and the unnamed lake above it - nasty terrain to negotiate around
Driving the 4 WD road, camping and hiking are free. Mind the private land along the road (do not camp on private land).
The peak is located within Sangre de Cristo Wilderness area, so wilderness rules apply.
-- Group size is limited to 25, including pack and saddle stock, with no more than 15 people in any one party.  -- Do not cut switchbacks. Doing so can cause severe erosion.  -- Camping is prohibited within 300 feet of lakes and 100 feet of streams or trails. Obey posted signs prohibiting camping or other activities. Some campsites may be closed to allow the area to recover from overuse.  -- A lightweight camp-stoves are recommended. Campfires should be at least 300 feet from lakes, streams, and trails and built in a manner that minimizes impact. Collect only dead and down wood, that is less than three inches in diameter (if you can't break it by hand, don't use it). Do not build a fire on exposed rock surfaces to prevent scarring. If possible, build fires on a fire blanket or a fire pan.  -- Soap, even biodegradable, pollutes the water. Dispose of wash water at least 300 feet away from any water source.  -- Pack out all garbage. It is NEVER acceptable to bury trash.  -- Bury human waste in a 6 to 8 inch deep hole at least 300 feet away from any open water, trail, or campsite.  -- With increasing visitor use in the Sangre de Cristo Wilderness, the Forest Service is considering a self-issuing permit system. Please contact the San Carlos Ranger District (719) 269-8500.

Summer and early fall are obviously the easiest times to hike the area with an easy access to Upper Huerfano Trailhead and easy travel on trails and slopes. Early spring and winter are more difficult based on snow conditions. The road is usually snow plowed for only about 12 miles, the additional 10 miles would require a foot approach when road is closed. Always check avalanche conditions if traveling during winter time.

There is a multitude of primitive campsites along the Huerfano Road. Do not camp in area lower down marked as a private land! You can also sleep at the trailhead. There are no toilet facilities.