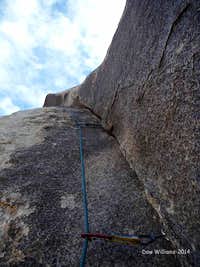 hidden corner on Canadian Driftwood
Upper and lower Dodge City refers to two relatively remote walls in the high reaches of Middle Canyon. Middle Canyon branches out of Rattlesnake Canyon. There are several outstanding routes, Party Till Ya Puke and Party in the Desert (both 5.10bs), that are easily reached along Corral Wall at the entrance to the canyon. But after that the climbing gets rather obscure with rarely climbed areas named Ponderosa, lower and upper Dodge City, Indian Country and Cactus City. The approach for upper Dodge City requires bushwhacking and boulder hopping up a wash that is beyond the flat area below Corral Wall. The wall is north facing and upper Dodge City’s routes rarely see any traffic.  From upper Dodge you can continue up to the col and then down into Cactus City and thus exit out to Rattlesnake Canyon making a large loop. 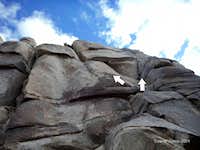 African Queen and Canadian Driftwood
In the moderate trad range on upper Dodge City are two routes that share the same start, African Queen (5.10a) and Canadian Driftwood (5.9). Miramontes has them as two pitches each, but in reality they are both easily done as single pitch climbs with proper extensions on your gear placements and a 60m rope. Canadian Driftwood is clean, African Queen not so much. However, both routes are worth doing if you have suffered through the approach and thus offer a few moderates to combine with other routes in Cactus City.  Most of the routes on upper Dodge City were established in 1990.
There are two fixed raps at the east end of the formation.  Both hit the ground with a single rope.  The highest one is located in the middle of the north face.  If climbing routes on the right side of the wall, you need to head east and scramble down a short ridge that tails off north from the summit or keep heading east and cut back west at a ramp which leads to a shorter rap located in a scoop that is atop Lynch Mob.  Both require a little scrambling to reach.

From the Rattlesnake Canyon trail-head at Indian Cove, hike up the wash to where Middle Canyon splits right before Rattlesnake Canyon heads up and left. Take the short boulder hop up into Middle Canyon and hike past the sunny Corral Wall on your right. Continue through the thick brush aiming for a small gap to the southwest. Once through the gap, do not head up and right too early. Take the second drainage on your right up towards upper Dodge City. Stay left when in doubt. The brush is heavy with a fair amount of obstacles in the wash. Upper Dodge City is a tall wall up and left. There is tons of brush to negotiate. To reach Cactus City, just keep bushwhacking up to a pass and down into a different drainage that leads south, back out to Rattlesnake Canyon.