We decided to go for a trip in the Upper Enchantments over Memorial Day weekend, before the permit season. We had an ambitious plan to climb five peaks over three days: Little Annapurna, McLellan, Enchantment Peak, Dragontail, and Colchuck. Our plan was to hike in to the Upper basin via Aasgard on the first day and set up camp, hit Little Annapurna, McLellan, and Enchantment on the second day, and descend via Dragontail and Colchuck on our third day. Google map of rough route. 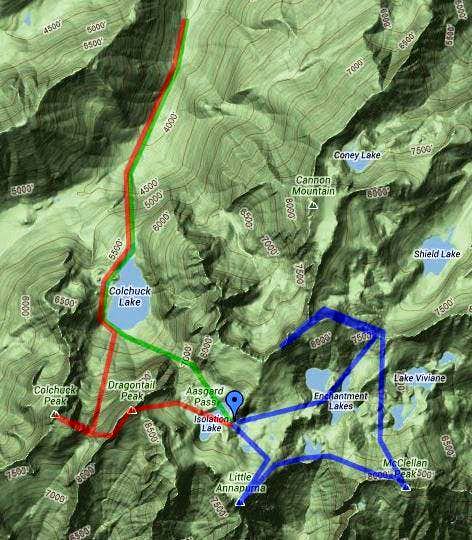 We got a bit of a late start, but ended up leaving the Stuart Lake trailhead just before 10am. The trail was just starting to get snow-covered at the elevation of Colchuck Lake, which we reached a little after noon. We ran into a ranger, who checked our permit and strongly warned us about the avalanche conditions on Aasgard pass and in the Upper Enchantments basin, due to several inches of fresh snow and a build-up of soft and icy layers from earlier in the season. He also warned us about the snow-covered boulder field at the bottom of Colchuck glacier, and advised us to climb about 300 feet to try to go over the field higher up where he expected more snow cover and therefore less chance of falling in a partially snow-covered hold between boulders. We decided we would follow his advice and traverse above the boulder field to get a closer look at Aasgard and evaluate the avalanche hazard. It turned out that trying to climb up and around the boulder field was a waste of time - even at about 300' above the lake we were still running into partial snow-cover and had to move very very slowly as we picked our way across the field. It would have been much faster to try crossing the boulders nearer the lake, where they were less covered and the holes were easier to see and avoid. As it was, it took us over an hour to get across the field to the base of Aasgard pass. 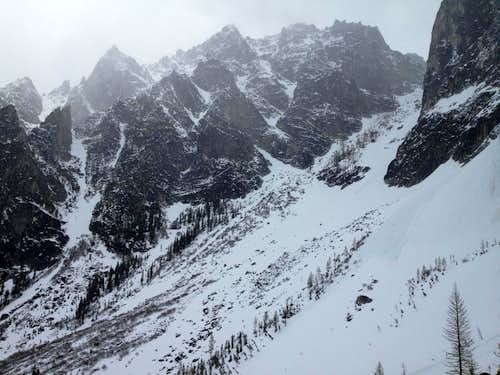 Looking up Aasgard pass
At the base of Aasgard, we stopped to consider the avalanche conditions and discuss the ranger's advice. We decided that a route hugging climber's left, mostly keeping near the boulders and trees there would keep us away from the avalanche gully on the right (which had several steep gullys on Dragontail sloughing off onto it, and which already had some loose snow debris). We kicked steps and scrambled on boulders straight up the pass, finally topping out around 4:30pm.

A view looking back on Colchuck lake from Aasgard pass.
We continued into the Upper Enchantments basin a little ways, then set up camp on the east side of Isolation lake at about 5pm.

On Day 2, we got a relaxed start and left camp around 8am. Although we had misgivings about the avalanche conditions, we figured we'd at least take a closer look at the peaks. We decided to start with McClellan. We got about a kilometer east of our camp when we ran into the ridge that drops about 400' down to Crystal lake. About halfway down the ridge, we started to have serious concerns about the snow conditions. There was four inches of fresh snow on top of a very icy layer, and the gully we were following down the ridge was about a 40 degree slope. The larger trees we were passing had all their lower branches ripped off, and the smaller ones were bent downslope. After some discussion, we decided that even if we could find a safe route down the ridge, it was unlikely that we would find a route up McClellan or Enchantment Peak that entirely avoided avalanche slopes. Additionally, we were continually in white-out conditions with very low visibility, and therefore we wouldn't get much of a view from the summits anyway. We decided to make the safe decision and turn around.
On studying our maps, we determined that Annapurna probably was shallow enough to be safe, so we went ahead and tagged the summit on the way back to camp. From camp, we decided to head up the ridge to the north of Isolation Lake, which also looked shallow enough to be safe. We ended up traversing on it a little ways towards Enchantment Peak, but ended up turning back due to the exposure, low visibility, and partial snow-cover over boulders.

A view of the ridge north of Isolation lake from our camp.

Discussing the conditions back at camp, we made the hard decision to forgo our planned attempt to summit Dragontail and Colchuck on our way down. It had continued to snow over the weekend for a total of about 8" of fresh snow.
Instead, we woke up late, broke down camp, and followed our steps down Aasgard pass. On our way down, we were chilled to find the debris from what looked to be a large avalanche at the base of Aasgard - almost certainly the 8" of storm slab from the weekend.