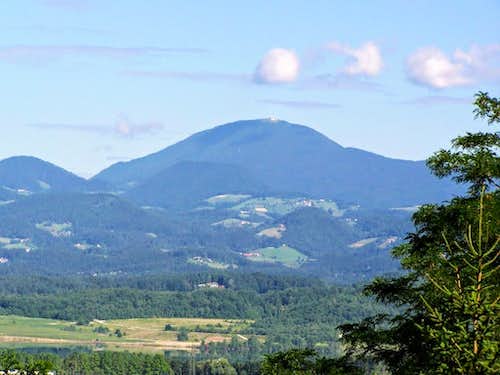 Urslja gora as seen from Velenje
Uršlja gora is the easternmost mountain of the Karavanke range. 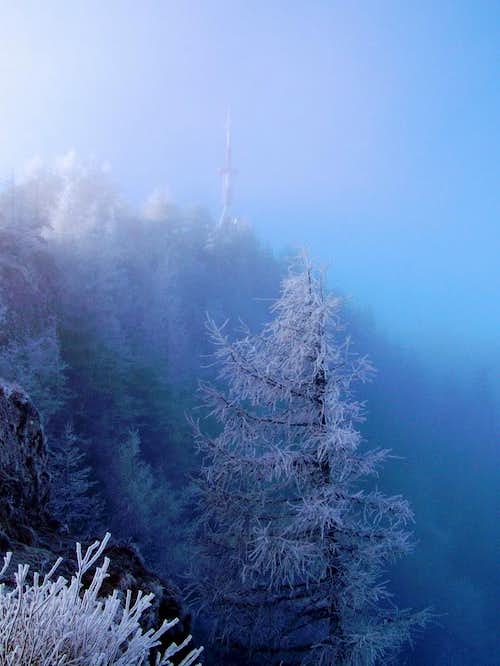 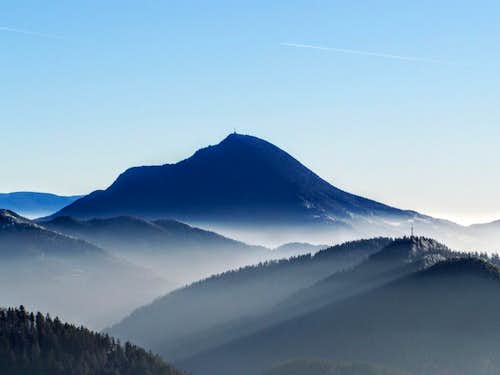 Urslja gora - view from Petzen
For those who don’t speak slovenian language, the name “Uršlja gora” may sound as it derived from the Latin ursus, and so it means Bear Mountain. But it is not so: Uršlja gora means Mount St. Ursula, and it becomes evident as soon as we think on the St. Ursula Church church that was built on the summit of the mountain. The german name of the mountain is Ursulaberg, following the same logic. And just to have a twist in the story: the peak has another name, too. It is also called Plešivec ('the bald one').

Why does this mountain has a Geman name, too? Uršlja gora/Ursulaberg is in Slovenia, only 12 km far from the Slovenian/Austrian border. Slovenia (and neither Jugoslavia) didn’t exist before 1918. Almost the whole area of today’s Slovenia was a part of Austria. The border of the Austrian provinces of Styria and Carinthia just crossed the mountain. The areas around Uršlja gora/Ursulaberg had a mixed German/Slovenian population. The towns (Slovenj Gradec/Windischgraz and Ravne na Koroškem/Gutenstein in Kärnten) had German majority before World War II, while some smaller settlements had Slovenian majority. It’s interesting that one of these small settlements (actually just a hamlet) is called Uršlja gora. After WWII most of the people belonging to the German nationality had to leave Jugoslavia.

Uršlja gora is 1699 meter high. Though this is not a very big number, still the mountain is very impressive if you look at it from the direction of Slovenj Gradec. Slovenj Gradec is on 410 meter above sea level, so the relative height of Uršlja gora is 1290 meter from here! 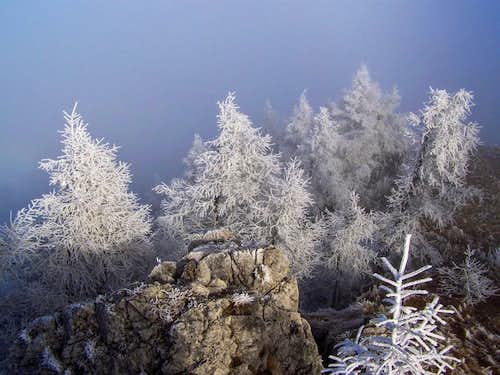 Winter scene on Urslja gora
Uršlja gora meets the expectations: not only its measures are considerably big but also its view is impressive from all directions. It has the shape of a “classic” peak from a distance.

The mountain is forested, except for some bare limestone rock walls on its northern side, and except for the hilltop that is grassy.

The mountain is popular among hikers, and also the mountain bikers like it since the hilltop can be reached on mountain road that is steep but has a relatively good quality. The mountain is suitable for tour skiing and even for rock climbing. On the northern side there are a few rock walls where a few quite popular (for locals) rock climbs are performed. 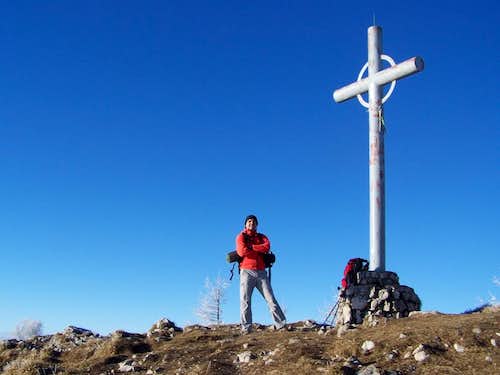 At the summit cross of Urslja gora
The peak of Uršlja gora is a lively place with a lot of objects. What are these objects? 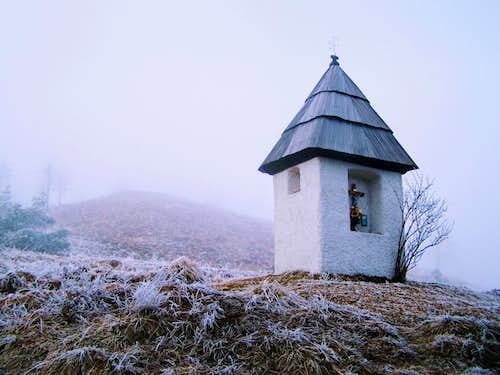 Small chapel near the peak of Urslja gora 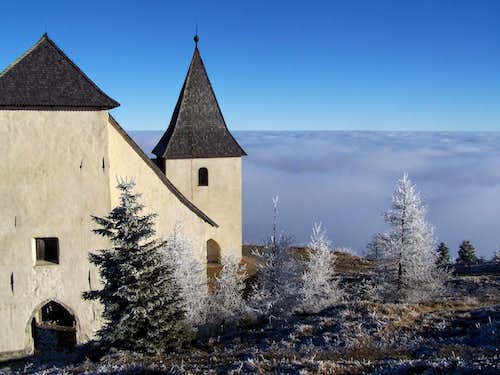 There is also a very small chapel near the hilltop, on the eastern edge of the grassy area. I didn’t find anything about it in the sources, but it looks like a building from the 19th century.

In 1962 a TV broadcasting tower was built on the peak, near its highest point. 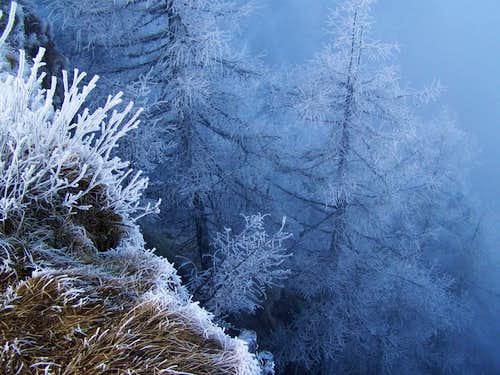 Also a tourist hut has been built on the peak, on elevation of 1680 meter. It has quite a big capacity with more than 80 beds.

And finally let me speak also about the highest point of the peak. There you can see the “mandatory” summit cross. Near to it there is a World War I monument.

Panoramic view from the peak:

These are the peaks that are the most exposed on the Horizon. On clear winter days, if you are lucky, you can see even Grossglockner (3798 m) in northwestern direction. Grossglockner is in 185 km distance from here.


Routes to the peak:

The Slovenian Mountain Hiking Trail (Slovenska planinska pot) crosses the mountain and its peak. This trail is the longest hiking trail of Slovenia: it is 599 km long, stretching over the whole country from east to west. Those who complete the full trail must do 45200 meter elevation gain (and similar loss)!

And now let me share an old text with you. It is not interesting from informative aspect but rather as a historical source. I have an old tourist guide of Baedekker’s, published in Leipzig, in 1900. It was in the times yet when Austria-Hungary was an empire in Europe. The book describes the mountains of the Eastern Alps in details. What does it write about Ursulaberg?

When I create a page on SummitPost, I like to give an impression for the readers about some typical flowers of the mountain. This time my attempt almost failed. I visited the mountain in the second half of December, so I didn’t have much chance for taking photos about flowers. Still, I was lucky to see 3 species. Let me share these photos with you: 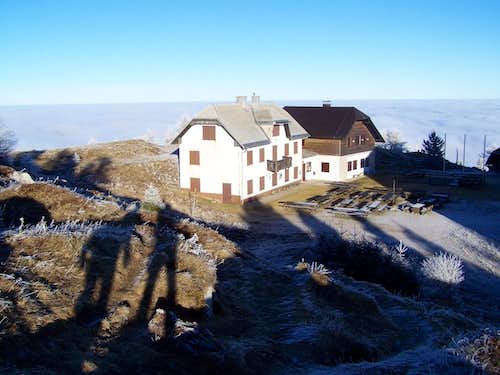 There are 2 campings nearby: one in Slovenia and another one in Austria. 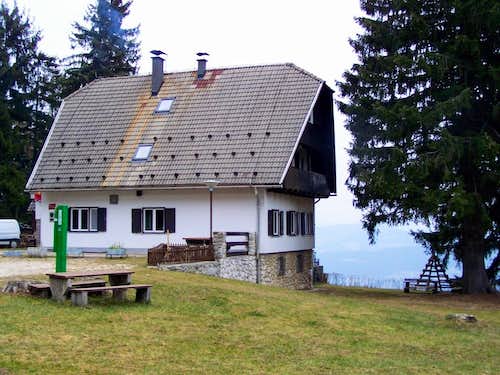