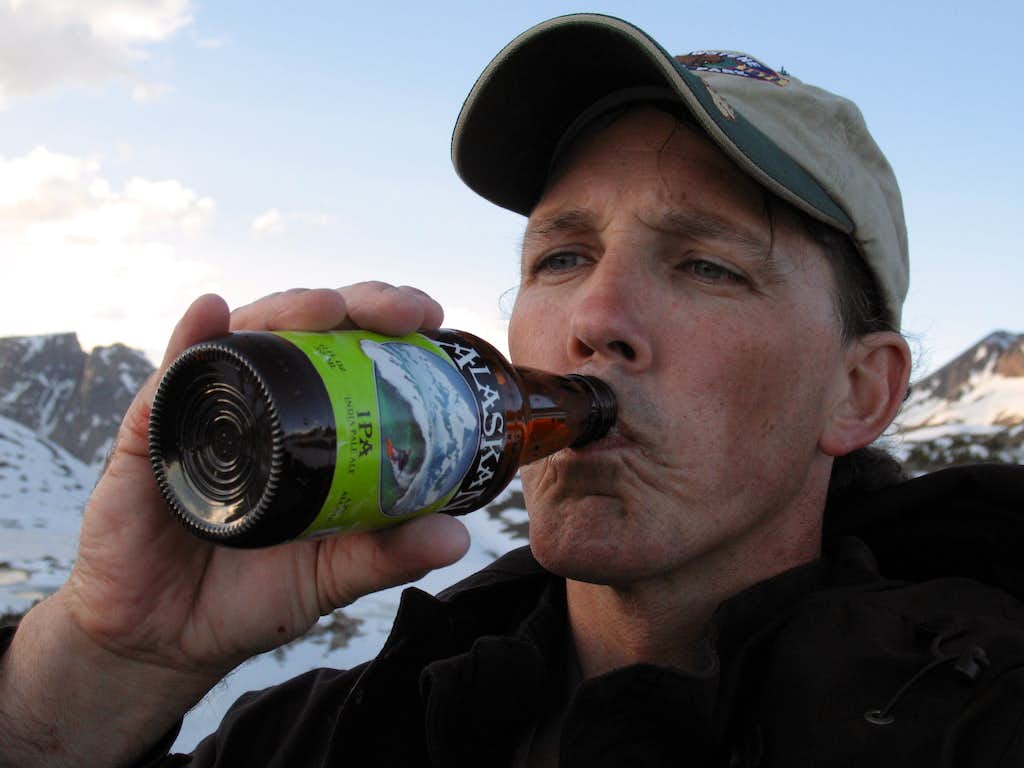 When ending a day in the backcountry, everyone has his or her own preferred way. Some reflect on the day's events. Some take in the scenery and the sounds as the daylight dwindles. Some pull out a guitar, violin, or harmonica and make their own mountain music. Me, I like to find a spot with a view, get out my pre-cooked bacon, and open that beer that has been buried in a snowbank for hours. Oh yeah! It makes the extra weight in the pack all worth it! Self-photo out in the Montana Beartooths near the Grasshopper Glacier-- July 1, 2010.
« PREV NEXT »

I like the Alaskan Amber over IPA but there is nothing better after a day of backpacking than a cold beer. Cheers!

I'm an IPA freak. The Alaskan is nice because the top twists off, so if you forget the opener, all is not lost!

At least when we do DI we'll be able to leave them in the car this time!

I'm making a run to Circle K to restock on
some exotic Bohemian brews.

I made my run yesterday morning!

Thanks, Fred. I spent a night out there and climbed Iceberg, Sawtooth Mountain, and the south ridge of Zimmer. Wolf Mountain was in the plan, but there was so much snow, pretty much everywhere (and deep and soft) that approaching it was just going to be too unpleasant. The upshot was that the road was impassable, so no ATV crowd up there. No one else at all, in fact, and I'm pretty sure I was the first person there all summer, judging from the lack of any tracks on the road, in the basin, or where the trail was buried.

Pre-cooked bacon and beer are staples of mine when I go backpacking! Chocolate bars, too.

Agreed. Nothing like a cold one after a successful summit bid! Missoula's Kettlehouse Double Haul IPA is another good option for the hophead. And it comes in 16 oz. cans...bonus for the backpacker!

did you know that

Re: did you know that

Really? Then I owe him some thanks. And maybe he owes me a free beer for the free advertising he gets from me!

Re: did you know that

see with him, I'm sure he will be glad to help :) Offer him another bike and you'll get as many more beers !

The love of cold beer in the mountains seems to be a language spoken by all...

when you hide your bottle somewhere in the stream in the valley, you just cannot stop thinking about that pleasure waiting for you for hours, hehhh I know that feeling very well :)

save one for me for after our climb. more than likely we will not need to keep it in a cooler.

So I hear. Originally, I was going to save space and leave the crampons at home. Now they're back in.

Good call on that one Bob. I will be carrying mine this year as well.

...I completely agree with your sentiments on this subject! (Can't believe I missed voting on this pic before! Pictures of beer in the mountains are always worth a 10/10.) Hope all is well and that you had a great summer of climbing.