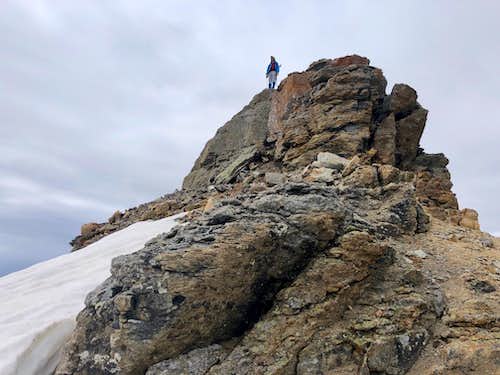 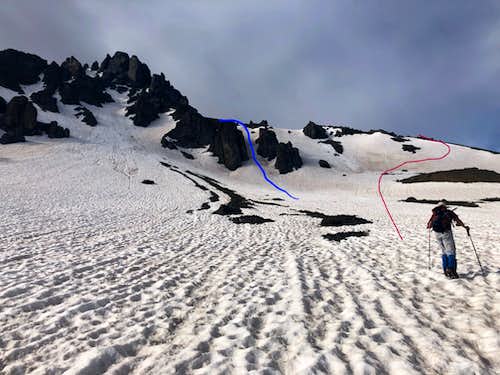 V 3
V 3 is a tricentennial peak (among the highest 300 in Colorado) located near the historic town of Telluride. V after the highest peak in the area Vermilion. The San Juan Mountaineers assigned an alphanumeric designation to select unnamed peaks. V means the peak in on the old 15-minute Vermilion quad. So, there are many peaks starting with V: V 2, V 3, V 4, V 5, V 6 up to V 10.

From Telluride travel west on Highway 145 for approximately 3 miles and turn south on Highway 145 south. Continue south for 6.5 miles to the intersection with Forest Service road 630, Ophir Pass Road. Travel east on this road through the town of Ophir for 3.5 miles to a gated road on the south side of the road. The trail begins beyond the gate.

Swamp Canyon - the trail climbs to the top of Swamp Canyon. It can take you over the pass to Island Lake and Ice Lake Basin area. The trail is not well marked. Remember you have to turn off this trail for climbing V 3. 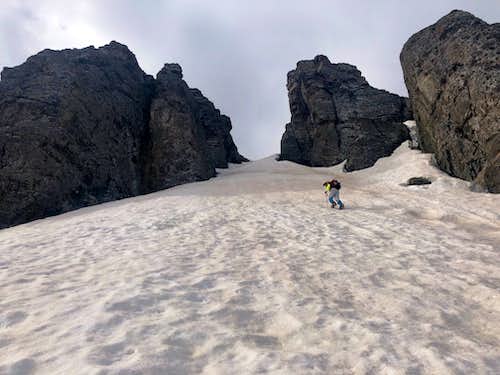 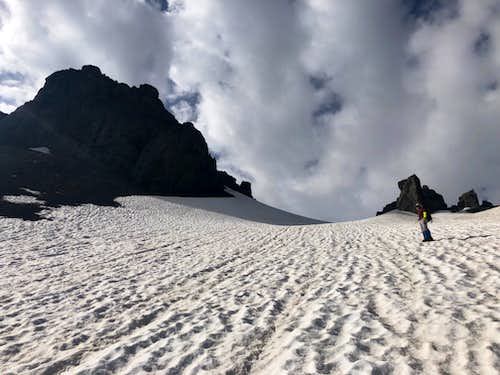 V 3
The route starts off the Ophir Pass Road, just a little bit out of the town of Ophir. There is an unsigned turn off for Swamp Canyon trail. The trail starts first as a dirt road and leads to a river crossing. We encountered a lot of avalanche debris blocking the trail and had to climb over trees. The stream was running high and the bridge was washed off, but there were fallen trees across the stream, which helped us to get on the other side. The trail continues as a road closed to traffic. Don't miss the turn off for the upper basin - marked with a cairn. The upper basin was filled with snow. The normal route is to head for the saddle between V 3 and Point 12,348, but we opted for a nice looking snow couloir to the east of the saddle. The section above the saddle per description is challenging due to loose scree, but we were lucky since it was all snow covered. The summit gully has a very few class 3 moves. Once you see summit block, traverse along its side and there is an easy way up from the south. The summit had a small cairn, no summit register. The summit views are spectacular, especially over to US Grant Peak.

The peak is located in Uncompahgre National Forest. There are no fees to drive Ophir Pass Road, park and hike.

I think early summer is the best time to climb when the scree slopes are still covered with snow. We encountered wonderful conditions and climbed a couloir leading high up to the access gully for the summit.
Later in the summer expect to deal with infamous San Juan screen.
Winter can be dangerous since snow if often unstable and there is a high avalanche danger.

There is camping at the turn off for Swamp Canyon, primitive and undeveloped. The closest developed campground would be Sunshine campground. Click here for more information.