Topping the list for our group’s August 2015 eastern Sierra hikes was Cloudripper. Three of the four of us had tried Cloudripper via Vagabond Peak (aka Thunder and Lightning Peak) as a day hike in 2014. Two of us made it to Vagabond, but we lacked the energy to cross the saddle to get to Cloudripper. This time, we planned to hike to Green Lake and camp there, before attempting the two summits.


The Hike to Green Lake

A minor comedy of errors delayed our departure from the trailhead at South Lake. After fixing and then having to refix a backpack, we did a quick food check – “I thought YOU had packed tomorrow night’s dinner – which necessitated a quick return to Four Jeffrey Campground. Ruvicha, Steve2, Jim* and I departed the South Lake trailhead at about 1:30 pm. The trail heads roughly northeast from the north side of the upper parking lot at South Lake. It’s a good, very visible sand and rock trail but, over the first mile, it has more downs than ups. We met two college students who intended to hike up an old water pipe that goes steadily up and later intersects the trail to Green Lake, saving some distance over following the trail. But they advised that the pipeline might prove a bit sketchy with backpacks. (On the return trip, it appeared that the sketchier parts of the pipe lie beyond where it intersects the Green Lake trail.) 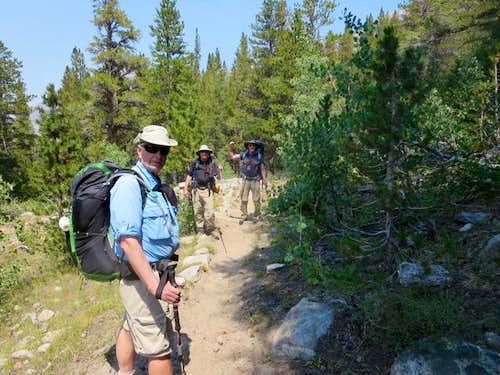 Ruvicha, Jim* and Steve@ on trail from South Lake 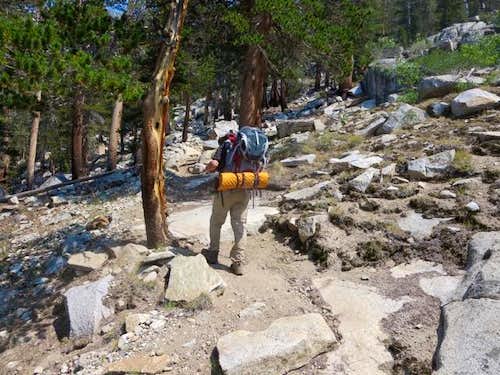 Jim* on trail from South Lake

After a mile on the trail and a loss of 500-600 feet of elevation, we found the sign marking the trail to Green Lake. (Had we continued on the first trail, we would have hiked down for about three-quarters of a mile to Parchers Resort, something that we remembered for the return.) Once on the sandy, well-established trail to Green Lake, we immediately began a series of switchbacks that carried us up the southeast side of the canyon looming over Bishop Creek and the road to South Lake. Occasional breaks in the trees afforded great views of the mountains to the west and south, though smoke coming over Bishop Pass from fires on the western side of the Sierra made the viewing less than ideal. 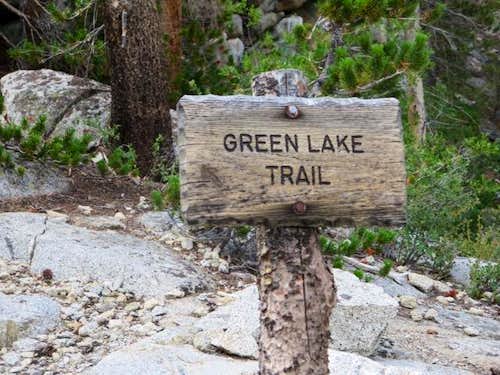 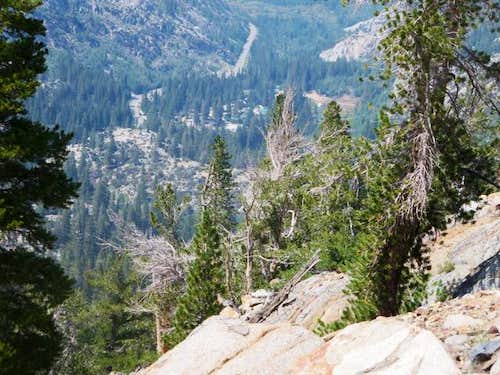 After passing Bluff Lake (very low water level), the trail climbed less steeply as we headed southeast for Brown Lake (also low). From Brown Lake, we climbed a short ridge to the east and then descended to Green Lake, following the trail to the southeast side of the lake, where we made camp. It took us a leisurely two and a half hours to cover the nearly four miles from the South Lake trailhead. We pitched our tents at 11,140 feet, about 1300 net feet higher than the trailhead. 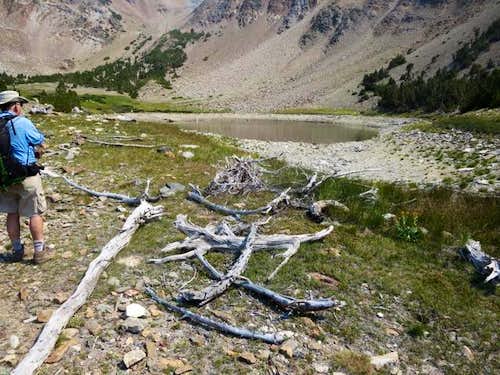 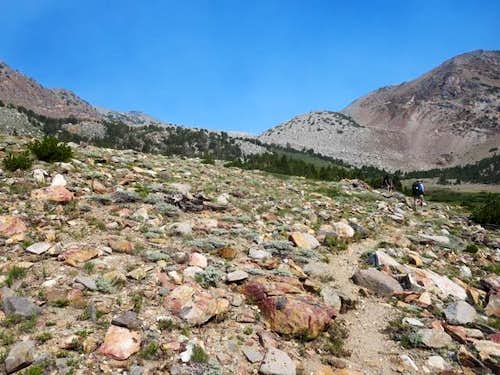 Trail from Brown Lake crosses this ridge to Green Lake 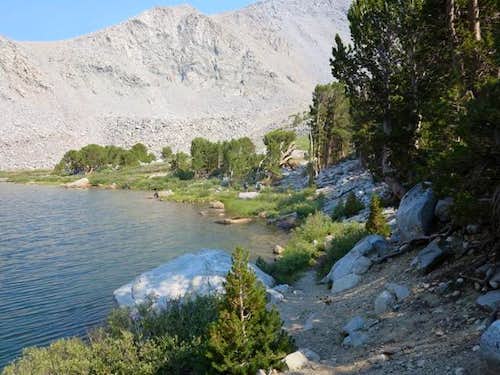 Fortunately, the wind shifted in the early evening and began blowing from east to west. That cleared out all of the smoke from the westside fires. All four of us got up at 2:00 am for a spectacular view of the Perseid meteor shower against a stunningly brilliant Milky Way.


Hiking to and Summitting Vagabond

The next morning, we had our daypacks loaded by 8:15 am and were on the trail, which loops around the south end of Green Lake and climbs on a long switch to the north, steadily gaining altitude. After the first switch, the well-used trail turned back toward the southeast, shortly cresting a ridge to enter a barren plateau. 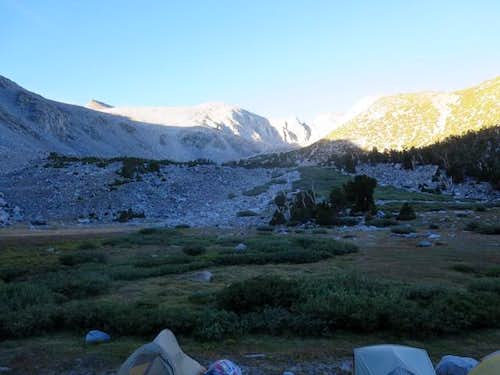 Vagabond Peak (at left) in early morning from Green Lake 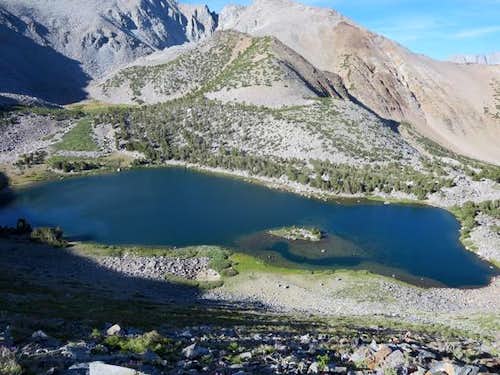 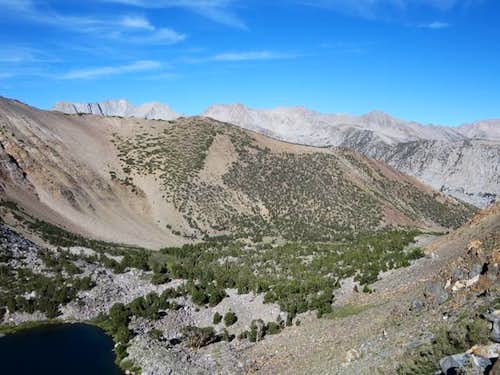 View to northwest from above Green Lake 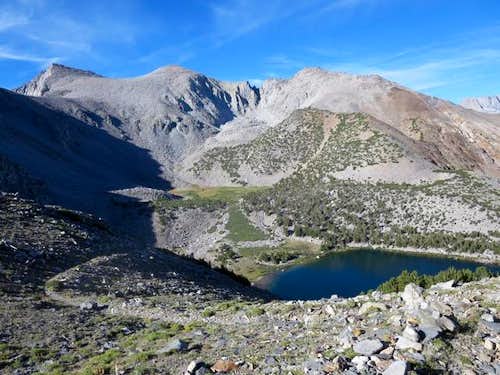 At about a mile from Green Lake, we passed a post alongside the trail. At 9:15 am, after 1.4 miles on the trail from Green Lake, we hit a second post. That is where we left the trail. While it would have been possible to ascend toward Vagabond earlier, we had heard that this slope to the south of the trail was the easiest path up, and we had encountered no problems on it the year before. Once one leaves the trail, one just hikes south up the sand and rock (there are some use trails, but they fade in and out). 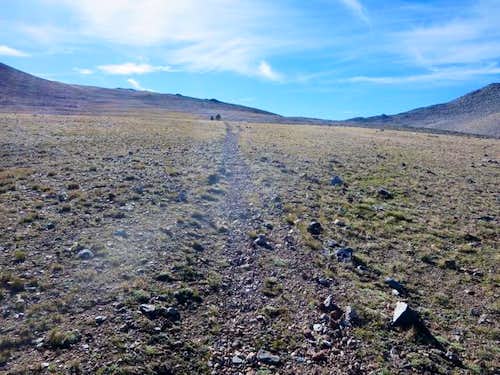 On plateau heading to cut-off to Vagabond Peak 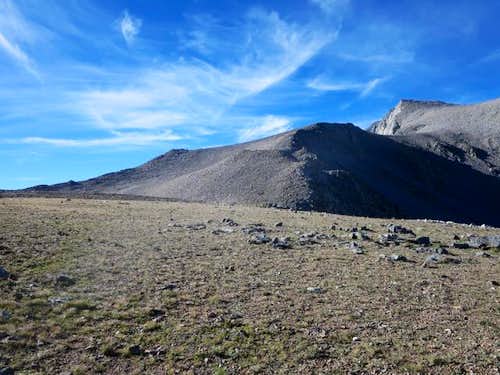 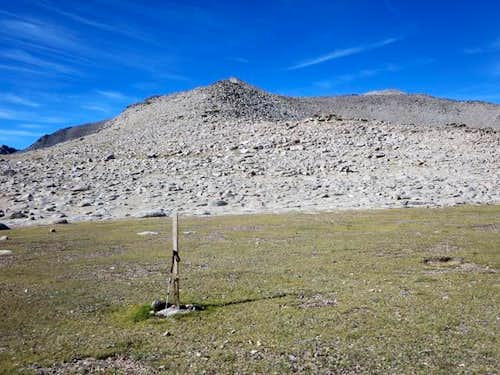 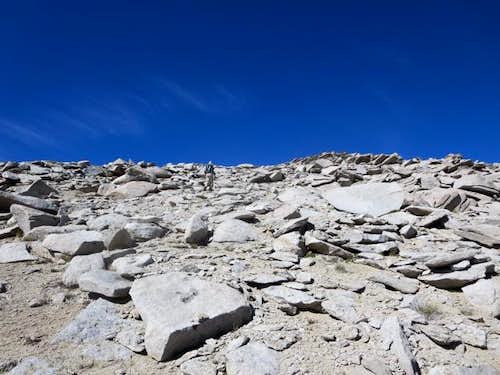 On first slope to Vagabond Peak

Forty minutes and six-tenths of a mile later, we stood atop the first ridge and crossed a sandy plateau before ascending the second slope directly to Vagabond’s summit. The higher up, the more rock to scramble over and around. We reached the summit by noon, 3.4 miles from our campsite and now at an elevation of 13,374 feet. 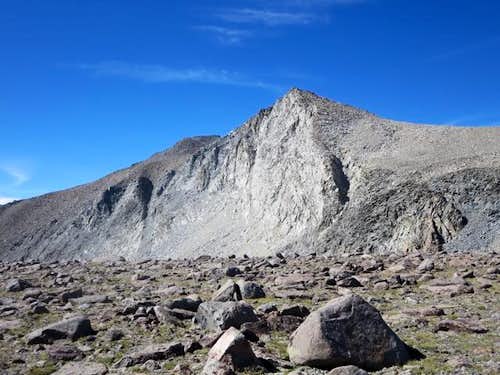 Vagabond Peak with Cloudripper on left 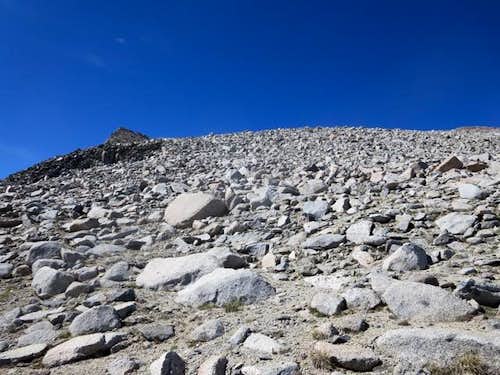 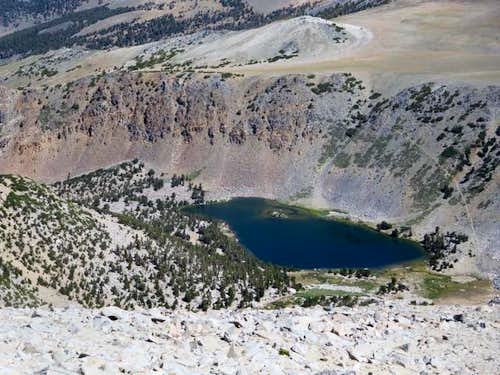 Green Lake from final approach to top of Vagabond Peak 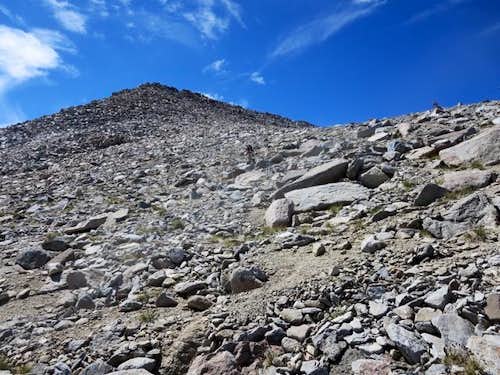 After twenty minutes on Vagabond, we down-climbed the rocky southeastern face to the saddle linking Vagabond to Cloudripper. In doing so, we shed about 300 feet, which meant regaining 450 or so feet to get to the top of Cloudripper. 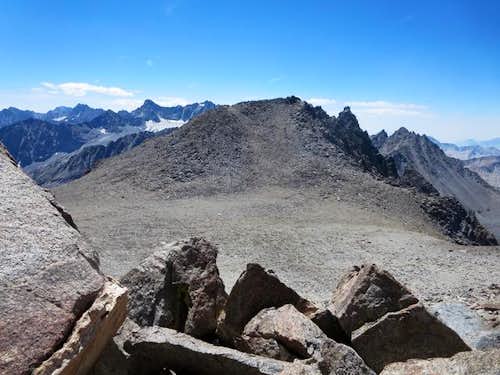 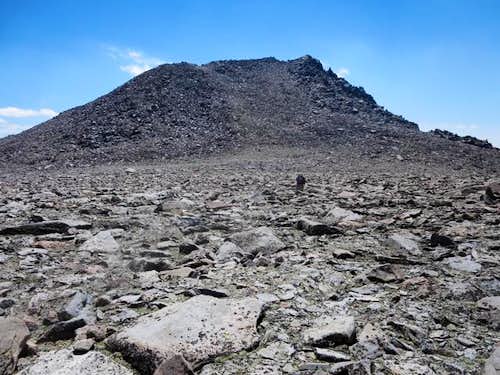 Cloudripper from saddle from Vagabond Peak

We reached Cloudripper’s rocky northern peak at 1:40 pm, about four miles from and 2300 net feet above our Green Lake campsite. That was enough for us; we decided not to go all the way to the higher center peak. The north peak afforded good views in all directions, marred only by smoke that was now again blowing in from the west. 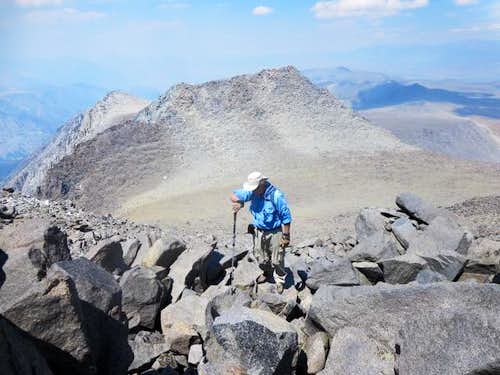 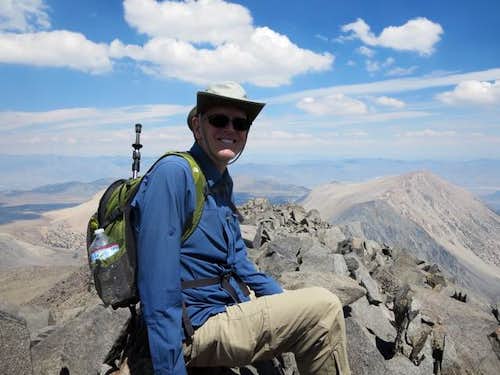 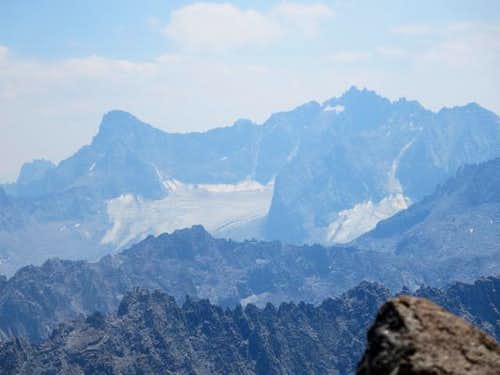 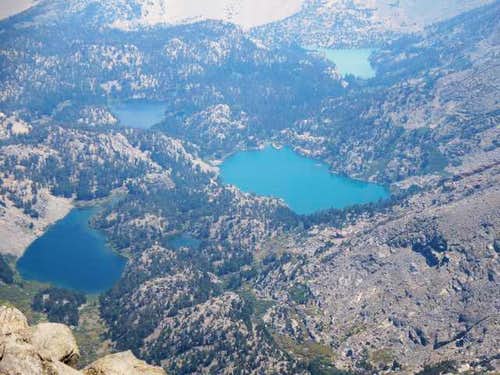 After 20 minutes, snacks and congratulatory photos, we descended Cloudripper’s north slope and headed back across the saddle to Vagabond. We saved some elevation gain by not returning to Vagabond’s summit but instead crossed the midpoint of the ridge that runs southwest of the summit before heading back down the way we had come. 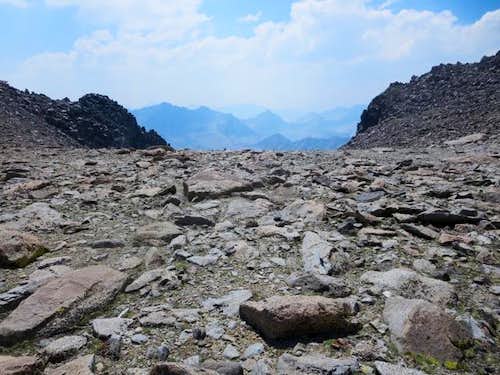 Looking west from saddle between Cloudripper and Vagabond Peak 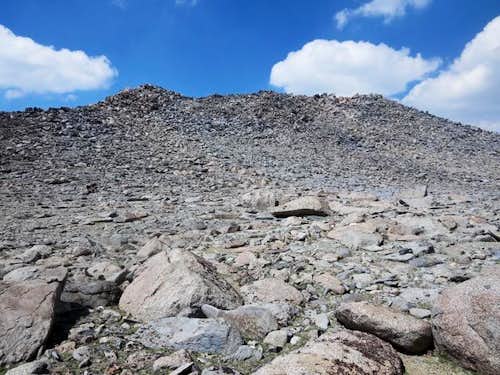 Heading up Vagabond Peak ridge from saddle from Cloudripper

We were back on the trail before 5:00 pm and back at Green Lake at 5:40 pm, completing an eight-plus mile hike for the day. The smoke continued to flow in, offering little decent stargazing that night. The wind kicked up considerably, with gusts of up to 50 MPH, making for a noisy time in the battered tents. 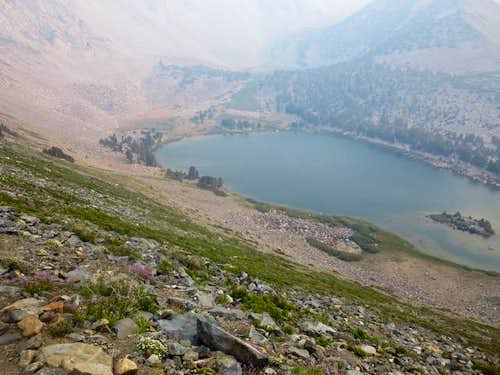 The next morning, we broke camp, and hiked back out. Where the Green Lake trail intersected the South Lake-Parchers Resort trail, we decided to head north (and down) to Parchers. There we dropped our packs and had something cold to drink while Jim* kindly walked up to the South Lake parking lot to fetch the car. 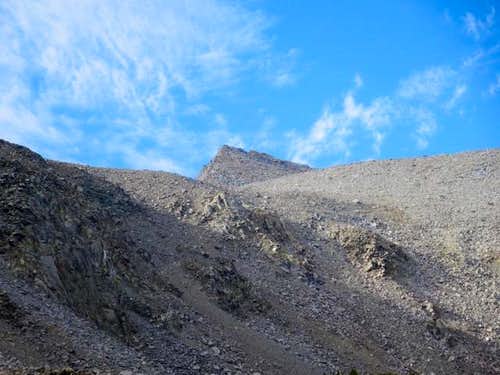 All in all, a good backcountry hike. We enjoyed Green Lake and the views from Vagabond and Cloudripper. It’s nice to have Cloudripper done – it will be great to report climbing that in this year’s Christmas letter.

(The hike was mostly Class 1/2, with a bit of easy and fun Class 3 scrambling over rock near the two summits. A note about times. Our group is old and slow, and the hiking times reflect that. Most hikers in decent shape should be able to cut significant time off of the times noted above and could even do Vagabond and Cloudripper via Green Lake as a day hike, though it would make for a longish day.)