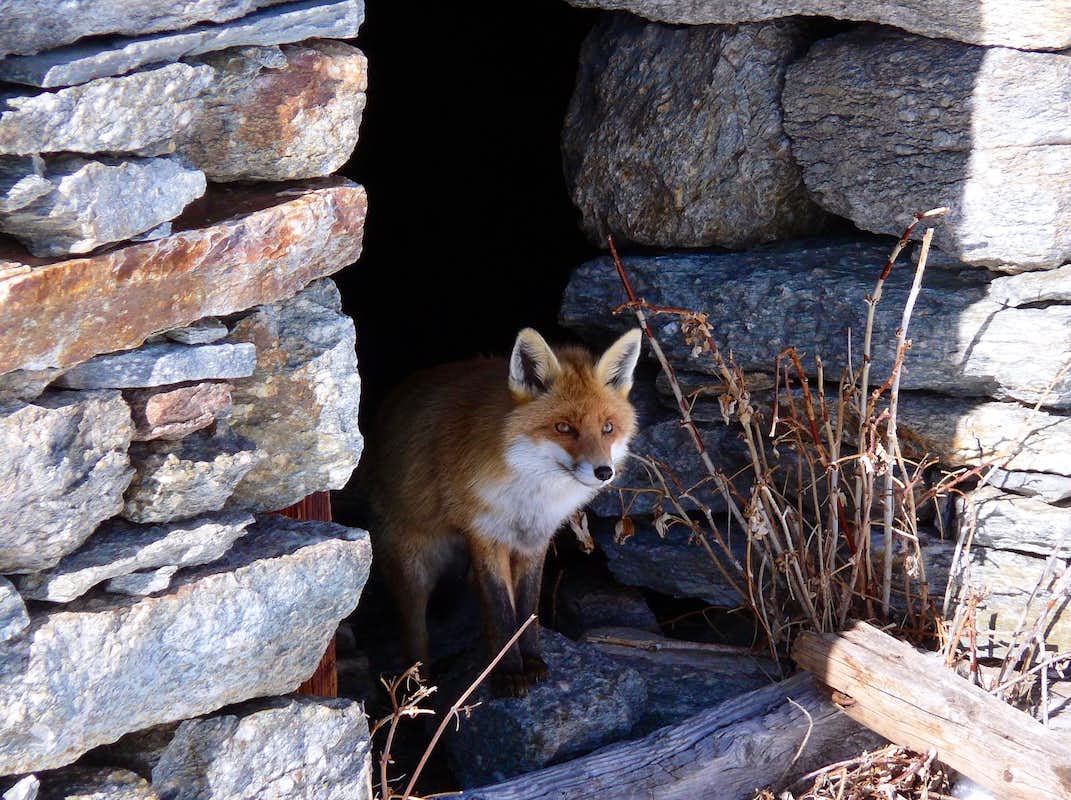 Located on the Southern slope than the Dora Baltea, or the Valsavarenche Valley Torrent Savara, is located immediately in parallel to that of Cogne, and before that of Rhêmes, analyzing so topographical layout of the valleys in Aosta Valley from East to West. Having beginning above the small Communes of Villeneuve and Introd, right at its entrance, stretches toward South for over 26 Kilometres after reaching 15 from the main town of Villeneuve-Dégioz Valsavarenche, at the foot of the Grand Nomenon and Grivola (3969m) to the East and the length of chain that reaches from Mount Roletta Punta Bioula (3413m) on the opposite side. These top, famous in the two previous centuries, have fallen somewhat into oblivion, although it is still the charm of their joint mountaineering history that goes with the life of the people of this beautiful valley. Once the rivalry with neighboring Cogne for the conquest of the Grivola interest is gradually shifted toward the more "high" of the valley turning more and more so to the Gran Paradiso and its satellites. They ended the times, to be able to go up, they saw as the Mountaineers even from the valley floor at Villeneuve Municipality. The old muletrack who traveled to the East high above the Savara to reach the old Refuge Vittorio Emanuele II° has been completely abandoned and now only prove a distant memory. Today a road asphalt along the entirety reaching Pont (1980m), where the adventure begins. But just before the same another trail reaches a new shelter dedicated to the two famous brothers climbers Federico and Renato Chabod, great Sons of Val Savarenche. But this is also, par excellence, since 1922 the Valley of P.N.G.P. (National Park of Gran Paradiso) that coinvole, but not so complete like this, the nearby Valleys of Cogne, Rhêmes and Soana-Ceresole Reale, this last in Piedmont. 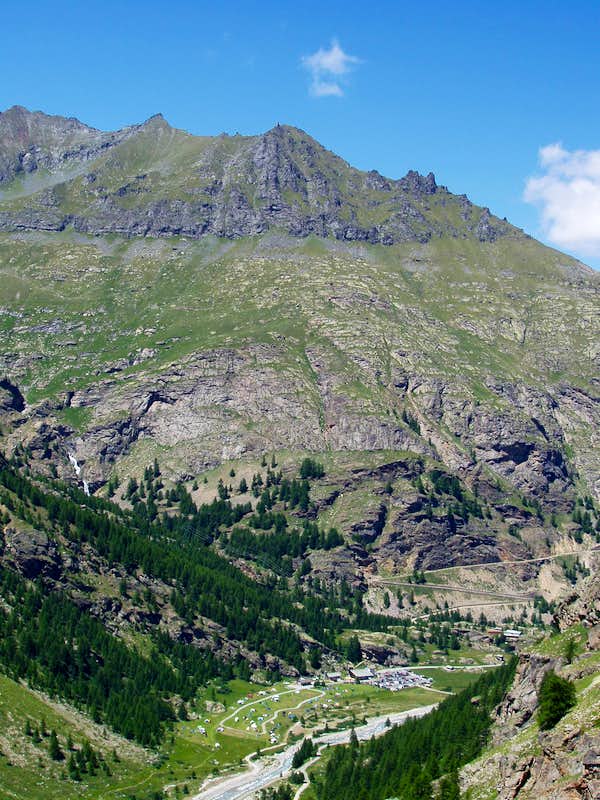 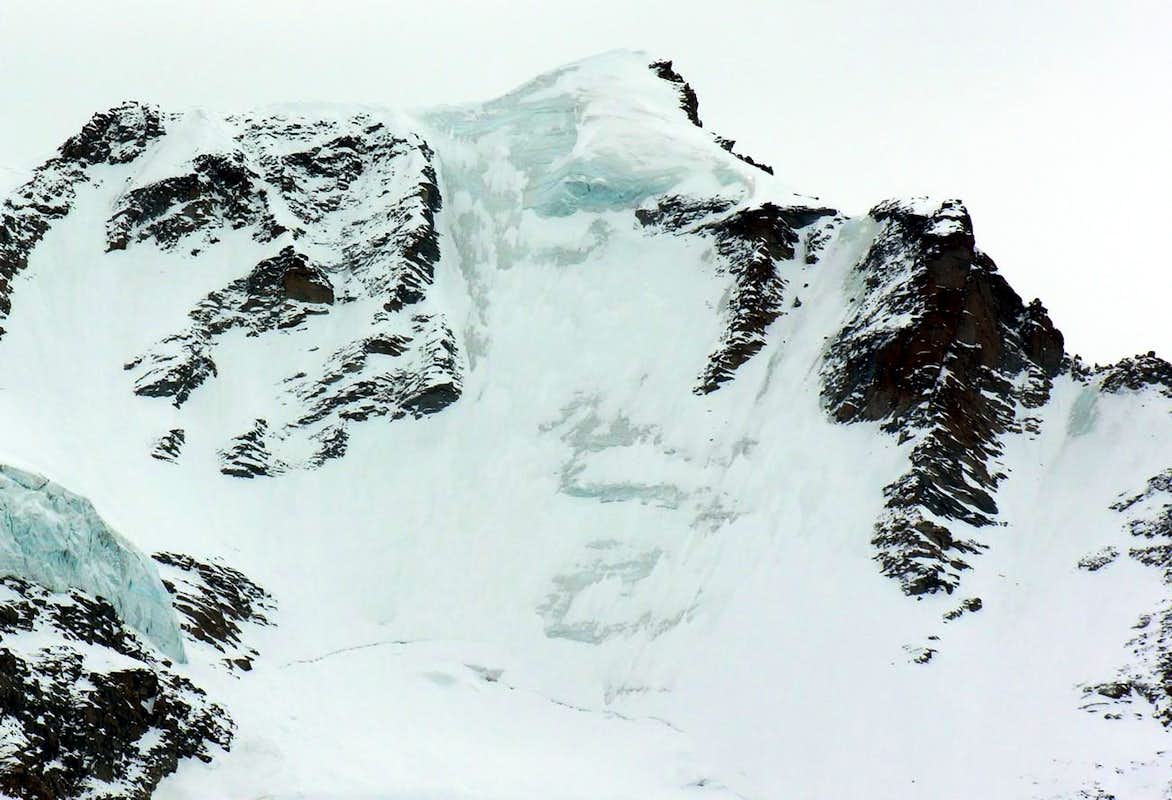 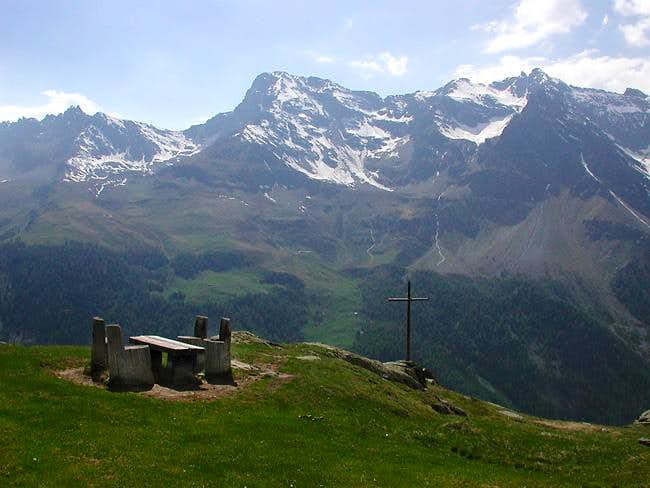 Towards Levionaz Alpages & Lauson Hill, by Maria Grazia Schiapparelli
Toponomastic Note: Valsavarenche also called Savaranche ie with a instead of e (in Aosta Valley is left with the Valtournanche) was once called as the Val Savarre named after its Torrent; but it seems that this name is the result of an imperfect transcription, as a result of erroneous information, the Cartographers State of Piedmont-Sardinian. In "patois" or the local dialect of the name is "Giuire", so at least they called the creek. Regarding the Grivola its name, which comes from "Grivaé or Grivaèsa" mean girl. Virgin girl as the Jungfrau in the Oberland Bernese. But it also has other names like "Horn of Cogne, Grivolet, Pic de Cogne, Aiguille de Grivola". Other hypotheses lean towards the name "Grivolé" or mountain waves spots highlight the two ice walls and interspersed with steep rocky bends. However, much to the disappointment for "Cogneins" was climbing the mountain for the first time August 23th, 1859 by the Slope Valsavarenche. From Dayné Mountain Guide Valsavara. To the inhabitants of Cogne has remained the satisfaction that, fall in total oblivion this way, the Normal is located in their valley. Regarding instead the name of Gran Paradiso is a pure invention of the '800, because prior show only those Iseran, Soana, generically designed to qualify and indicate the vast area beyond the edge of Val d'Isere in France and the Soana-Ceresole or also known as of the Valle dell'Orco (Orc Valley from the name of its Torrent) with Piedmont. Other names, such as Becca Montandayné, indicated a land ownership, that by Dayné; some names are clearly root of Piedmont such as Becca's Monciair where Becca is then a repeat of Mont or vice versa. 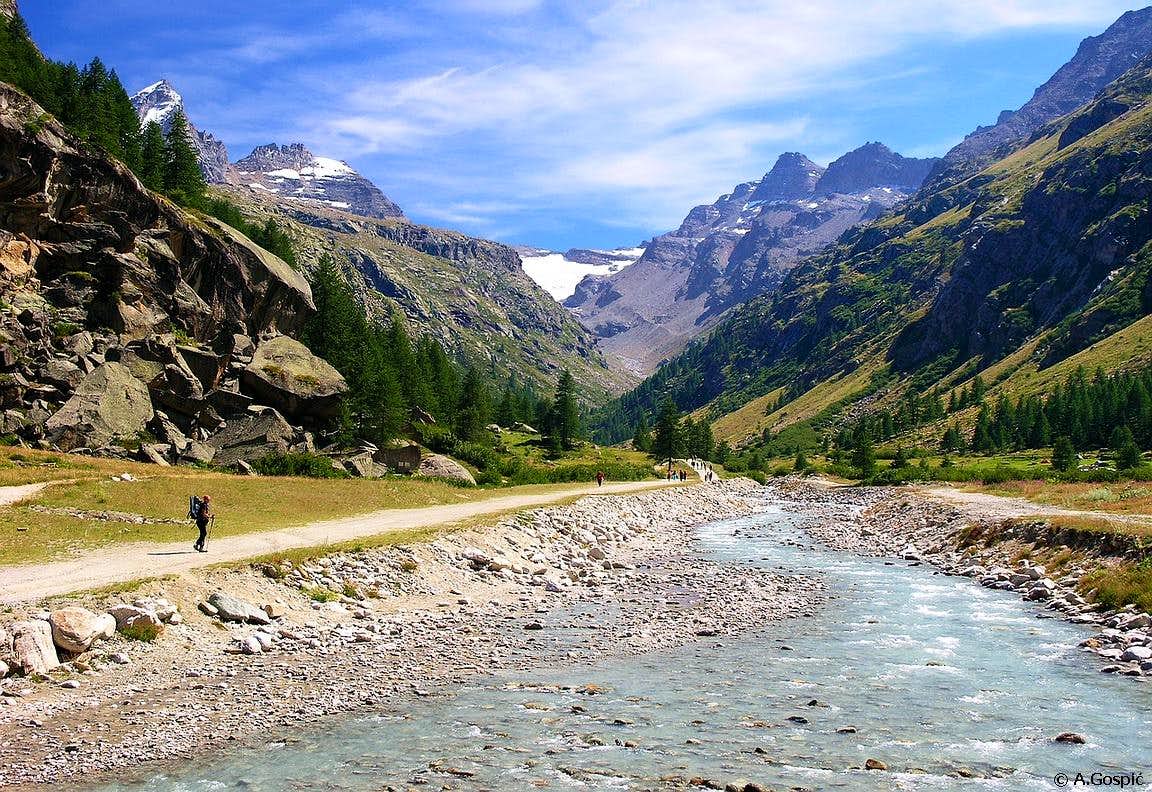 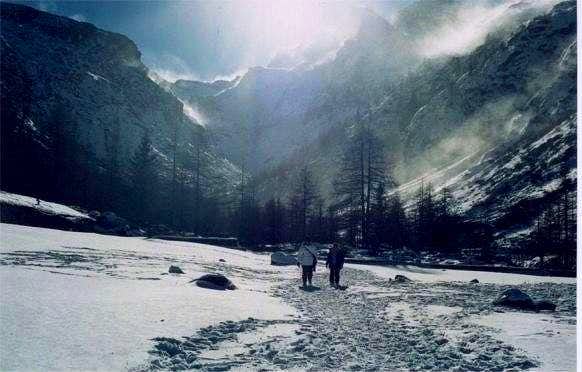 Snowy Pont Valsavarenche, by eluc
Valsavarenche: offers walking, hiking and some beautiful routes of glacial North Walls of Gran Paradiso, Ciarforon and Becca Monciair; interesting rock in the South Wall of Becca Moncorvé (various routes) and on renowned South Crest Herbetet, while the other climbs, although not always easy, have gone completely out of fashion. In general, the attendance of this valley is donated to climb along the Normal, the Gran Paradiso (recently more and more fashionable ski-mountaineering), starting from the two Shelters Vittorio Emanuele and the Chabod; fairly easy climb and close Tresenta, while the more distant Teeth Broglio have fallen into total oblivion, as incidentally for Grivola along the old via that ran through this side or the Southwest. Regarding the walks, very often is reached Croix de la Roley (1h from Pont Valsavara) at the beginning of the long Nivolé Tableland; excursions between a classical (long and a little boring) is the achievement of the Col Lauzon or Lauzon starting from Eaux Rousses. The ancient Bioula is instead going by the wayside and the trail of "Re Toio" is going more and more into decay. Then there are ascents "rare" because it made a one time or up to one or two repetitions type the Fourquin de Biola and Clocher de Djuan, but things are sought only by "connoisseurs", while the Punta Basei, departing from one of two Refuges Savoia or Città di Chivasso or even in a day from Pont of Valsavarenche, ascents are among the most popular. 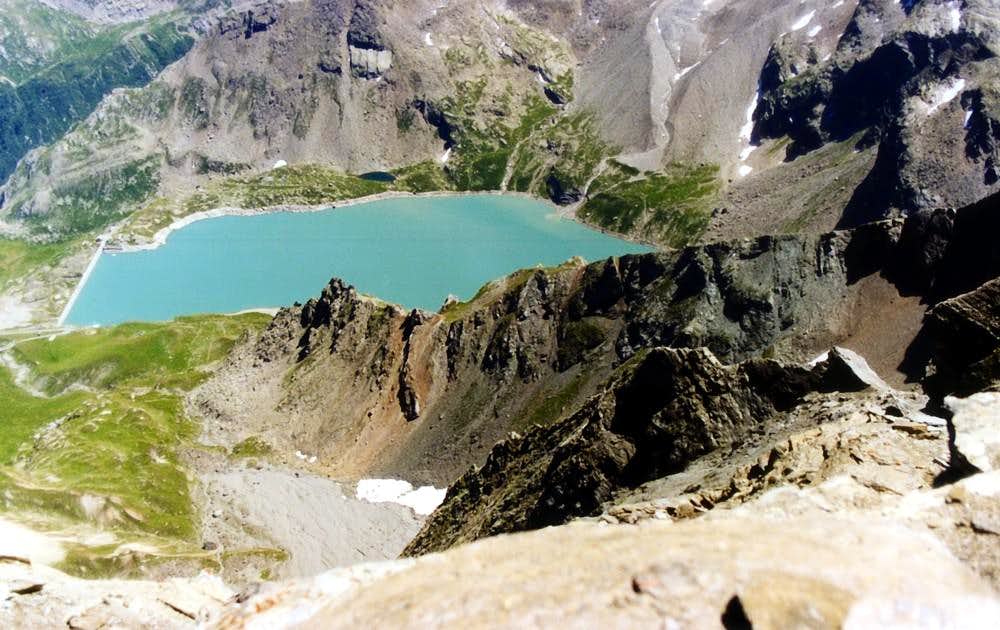 "From Basei to Ceresole Reale Valley", by Gianfranco Vicentini
The area immediately to the North is rather rich in lakes (Leytà, Rosset, Trebecchi, Chavaney) that lend themselves to easy walks-hikes, while that at the next Lago Nero requires a little more experience; and close to the East than in the two shelters are the two Lakes Nivolé while to the South, just after the eponymous hill and now in Piedmont, we find the Lakes Agnel and Serrù overlying the famous Dam-Lake Artificial Ceresole, almost at the end of Orco's Valley. But there are still places to "explore" maybe passing on the trail of more than old now almost ancient ascents, or transiting where once passed almost exclusively hunters chamois and ibex; all you need is a willingness to go outside of the slopes usually frequented by mass. If you go to Dégioz a path East takes you to the Casotto P.N.G.P., located between the Alps Boconnere Dèsott and Damon; continuing in that direction can reach the Belleface Pass (3095m) located between the bold spiers of the Grand Nomenon (3488m) and the elegant Northwest Ridge of Grivola, looking out you over the wild Walloon of Nomenon. Or, if you have smaller ambitions and want to make only a nice walk, from Damon (2276m) turn the South reaching the Maison de Chasse (2569m) and then down again to the bottom of the valley coming to Casotto Levionaz Dèsott and to Camping Grivola at the Village of Tignet, on Regional Road. 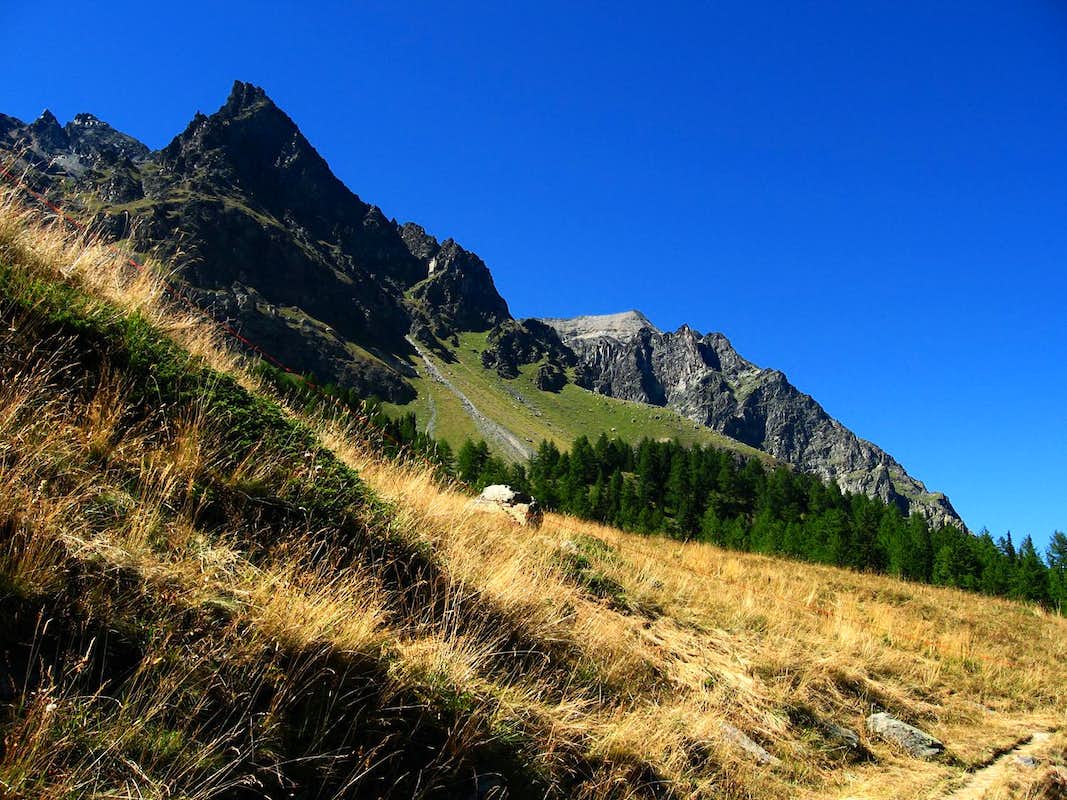 Near "Pavillon Royal de Chasse" Orvieille, by andrea.it
Otherwise, on the opposite side, always starting from Dégioz or Maisonnasse Rouges-Eaux (1652m, 1666m) can go up to the "Pavillon Royal de Chasse" of Orvieille (2168m) at the Casotto and the Alps of Djouan; from this camp neo King of Italy was holding contacts via telegraph to the Capital of Turin. Already this turns out to be a beautiful and historic walk, but if you want to lengthen the course, go wild in the Northwest Walloon of Fourquins towards Punta Bioula; or the Southwest reaching with the Alta Via No. 2 Entrelor Hill (3007m) and then maybe go down to Rhêmes-Notre-Dame. Also from this side is waiting for the classic Kki-touring trip to Punta Entrelor (3426m), starting from the Pont du Grand Clapier (1726m) or more forward from the large parking lot in Pont (1994 m). But now here you are "immersed" completely by the tide of the mass that is to go to columnates Emanuele Shelters in revelry or the Gran Paradiso. Someone is content of the Restaurant "Gran Paradiso" by the friend Jacaccia to eat a good polenta with fontina, but is still the realm of great confusion to say the least. But we want to get out of this track and go south along the opposite bank of the Stream Savara. A small path to Unnamed Alp 1991 metres; if you go to the right climbs to that of Seyvaz then continue on an ancient path that, among herds of ibex, leading to the Grand Collet (2832m) and then down on the other side on the floor on the Nivolé Tableland. If instead go straight to reach the South Alpage Grand Etret (2178m) and, if you're a "hard men", the above Glacier below the Hill (3139m). But these are things for OSA (Good Mountaineers Skiers) and not all are. 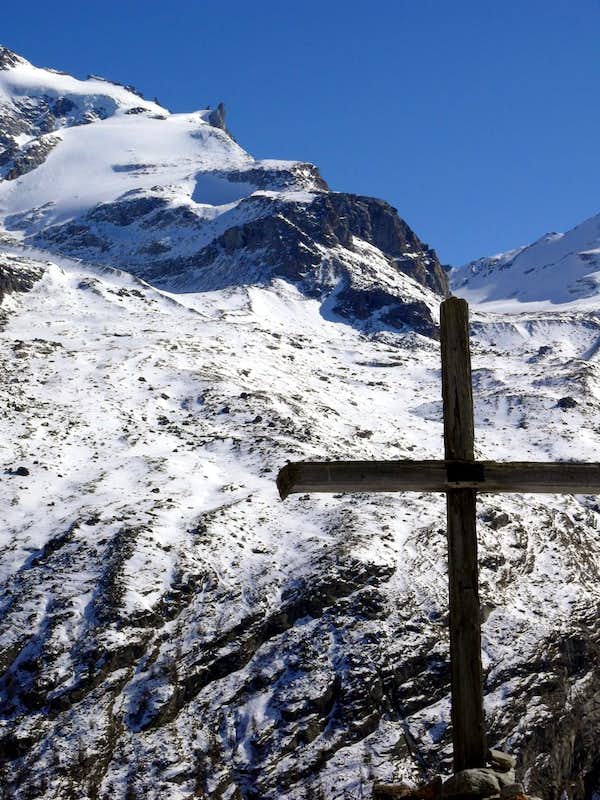 "From Nivolé Tableland to Granpa", by emilius
We are content going right to the Cross de l'Arollay (2322m), which offers a great view of the whole "Granpa" or just above the Alp Turin or Teureun, where you will find surely the Red Fox. However, if you are a tireless "Scramblers", let there Tourists at the tables and benches (they have already done a wonderful Walk) and climb upwards scree "unclean" at the Cima of Rolay (2995m), then traverses the watershed to the South reaching progression Grand Collet, Mont Giansana (3051m), the two Tops of Seyvaz (3074m, 3207m) to conclude in Colle and Punta Fourà (3441m). Re-enter the Nivolé because we are down to Pont deliver to You Diploma of "Great of the Gran Paradiso". From this moment all the Summit are within your reach. Seriously, we hope to have given you some good suggestions. You can come and check by visiting the Val Savarenche not regret it. I hope just to have done to make You a nice "Valsavarenche Tour" ... 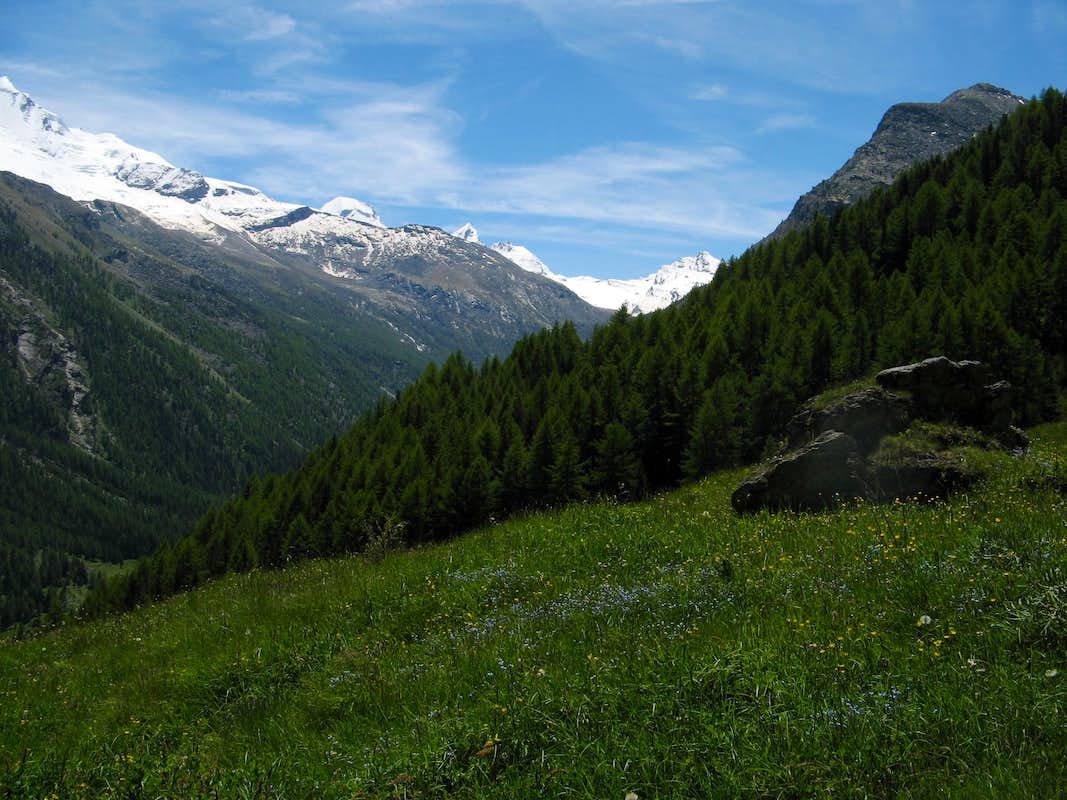 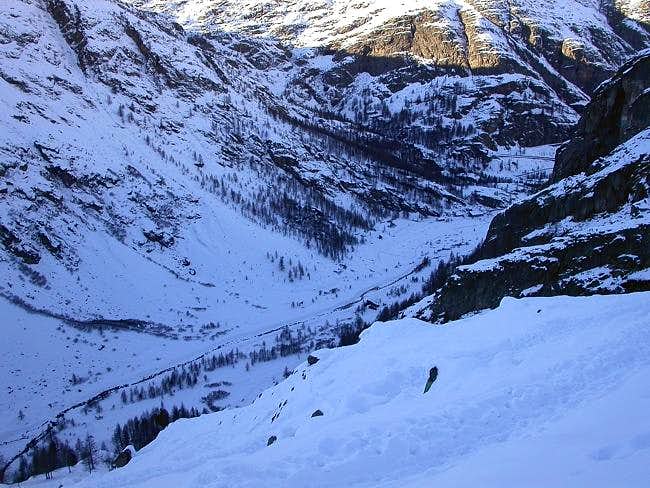 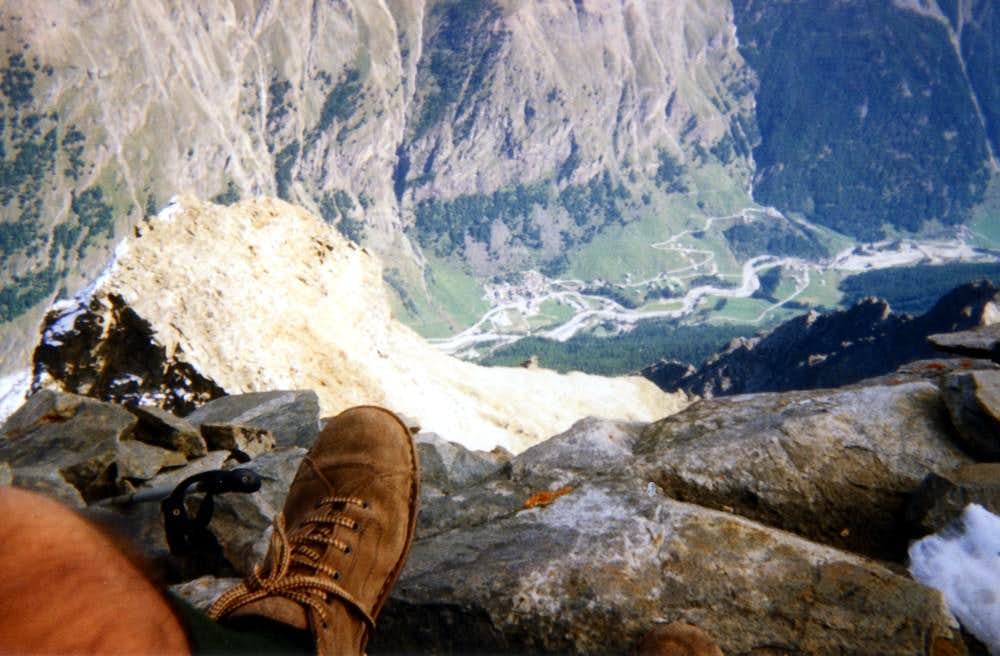 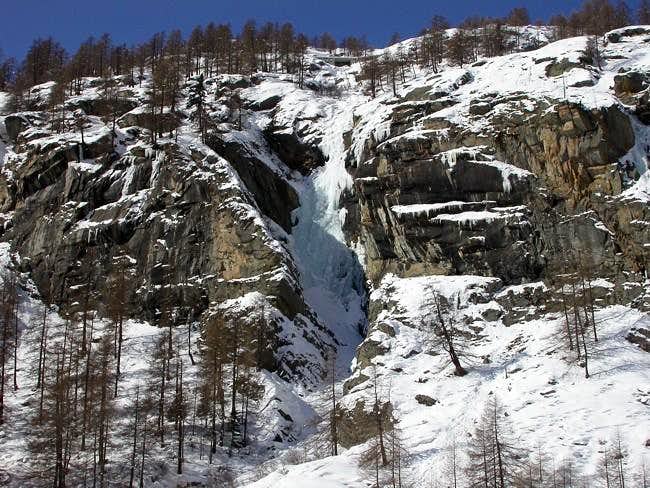 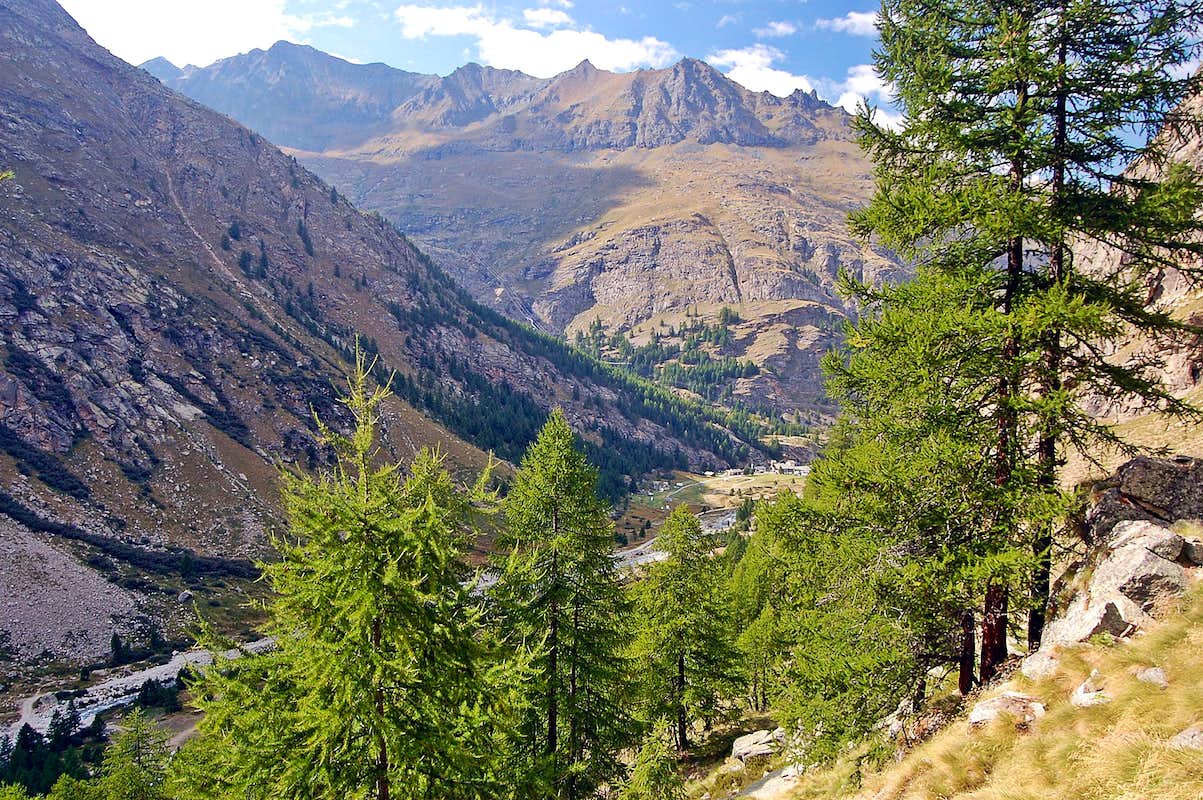 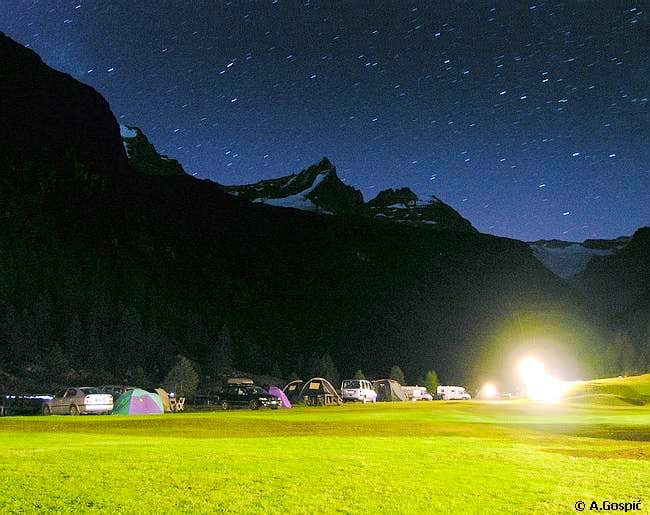 "Into the Night", by Velebit

"The "Granpa" is the great divide between the Cogne Valley & the Savara, by emilius 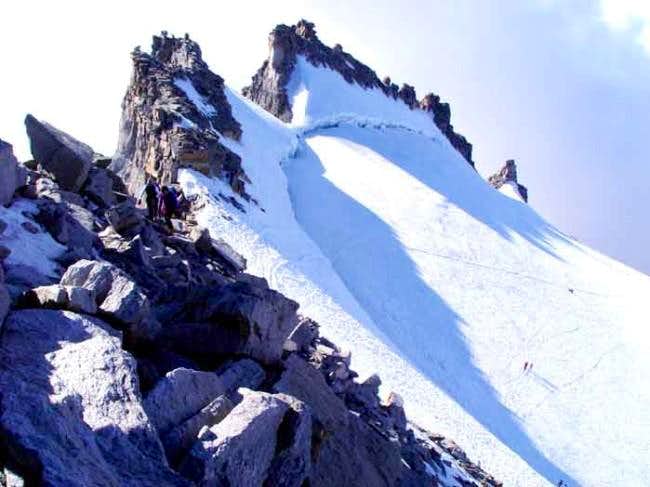 ^^^^^^^
MOUNTAIN CHAINS & SUMMITS Succession from Gran Paradiso to the Northern, Southwestern & North-northwestern watersheds
"At the entrance", by livioz 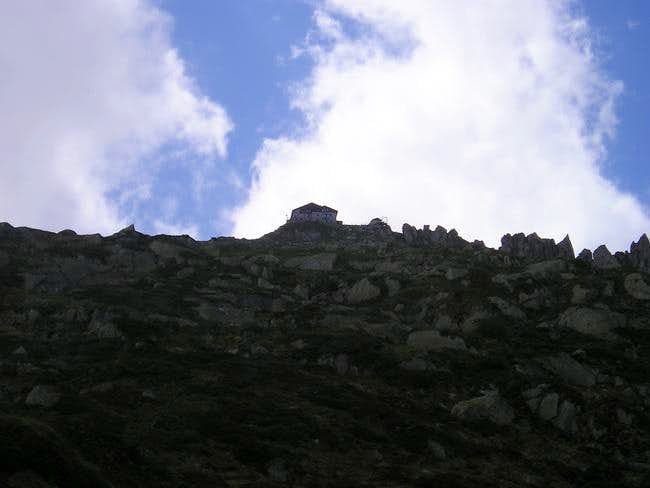 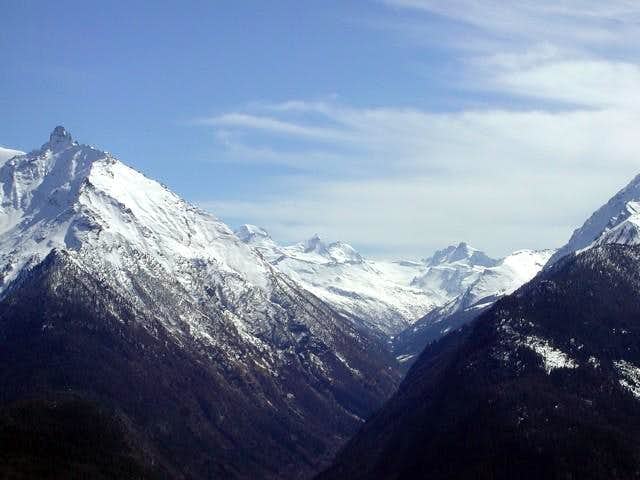 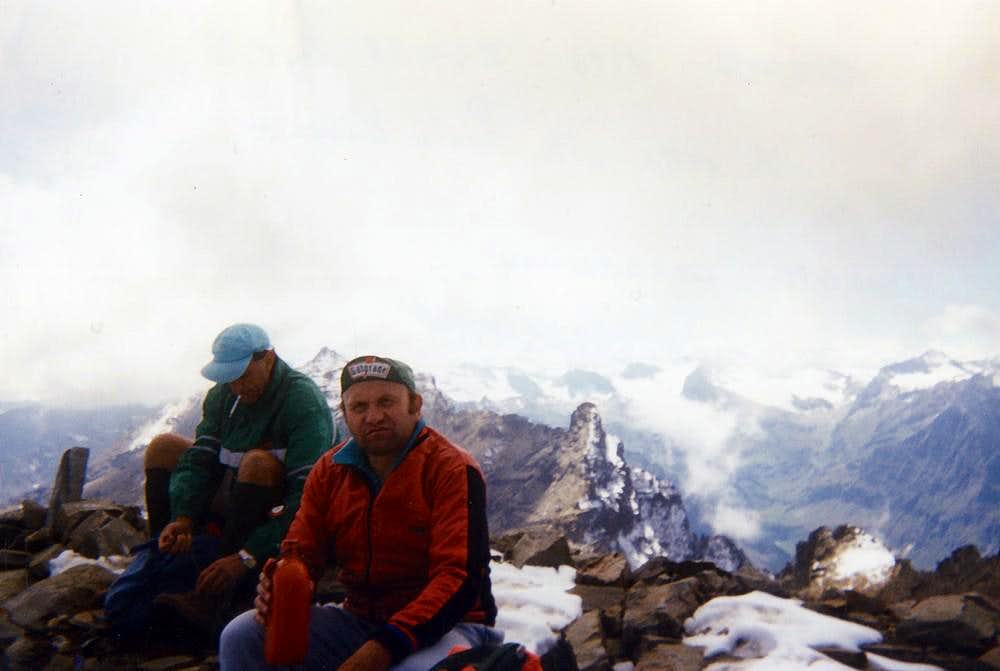 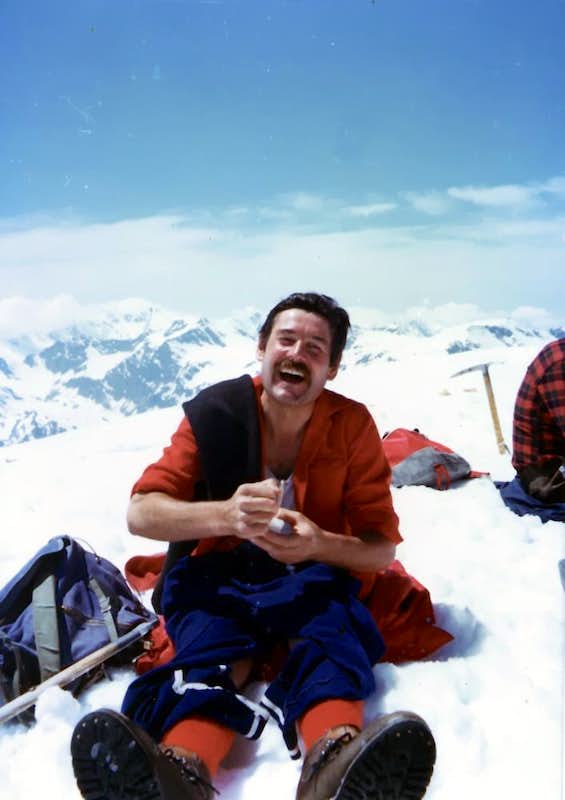 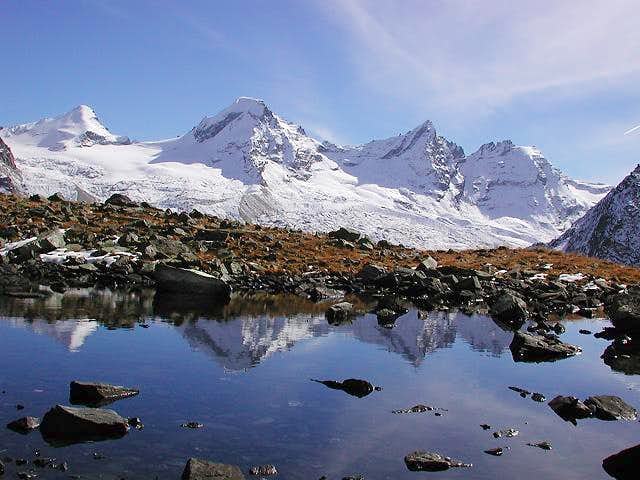 "All Vallons underlie to His Majesty the Gran Paradiso", by Romuald Kosina 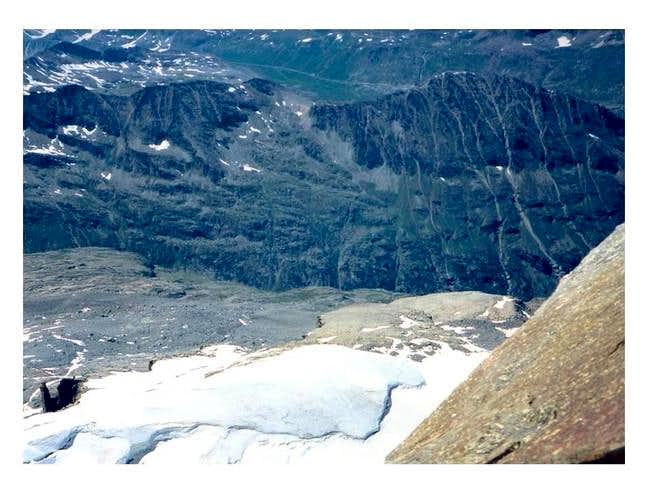 ^^^^^^^
From the Gran Paradiso, only peak in Aosta Valley completely Italian above 4000 metres, the ridge dividing the Piedmont turns to the Southwest with the summits of Becca Moncorvé, Tresenta, Ciarforon, Becca Monciair and Denti (Jags) of Broglio also Breuil, then falls above the Grand Etret Pass, large glacial window between Pont Valsavarenche and Pont Canavese, and rises again to Mare Percia and the adjacent Point Fourà. From this a long buttress divides the Walloon of Seyva from Nivolé(t) Tableland, the plateau largest in Europe with its eleven Kilometers of grasslands, to finish the eponymous hill near the Refuges Savoia and Chivasso. Here comes Ceresole Reale from a paved road that would have to reach inside the Pont Savara P.N.G.P., but was interrupted and there remain only the dismal track to deface the environment. They say that the inhabitants of this area are all from Pont Canavese, through these hills and vallons. In fact they are a bit special in Aosta Valley ...
"The Gran Paradiso "slides" to the North with its Appendices, then gives way to other Mountain Ranges to the West", by emilius

^^^^^^^
"Amongst Pila Basin & Cogne Valley (left), opening like a fan, Savara goes up abandoning Rhêmes to the righy", by livioz

^^^^^^^
VALLEYS & VALLONS In order to deploy clockwise into Valsavarenche from "Granpa" towards Northern, Southwestern & North-northwestern watersheds
"From Arollay Cross towards Nivolé Tableland" in Valsavarenche", by Corvus 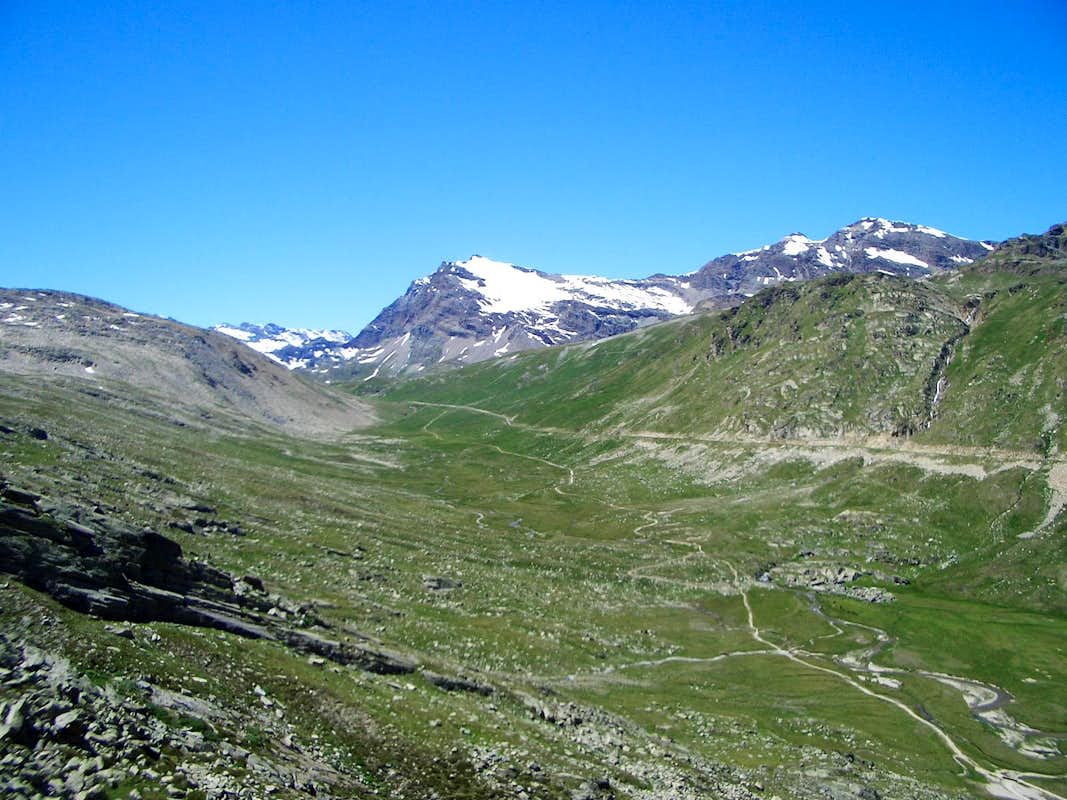 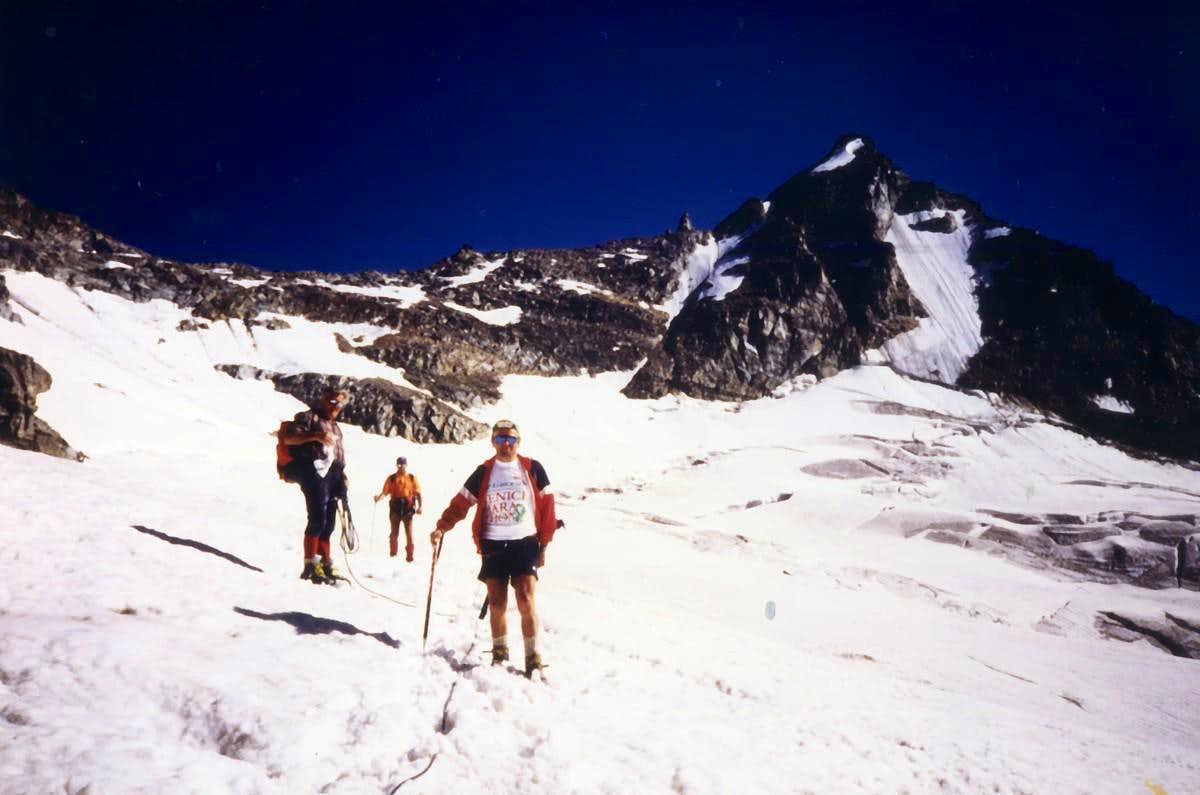 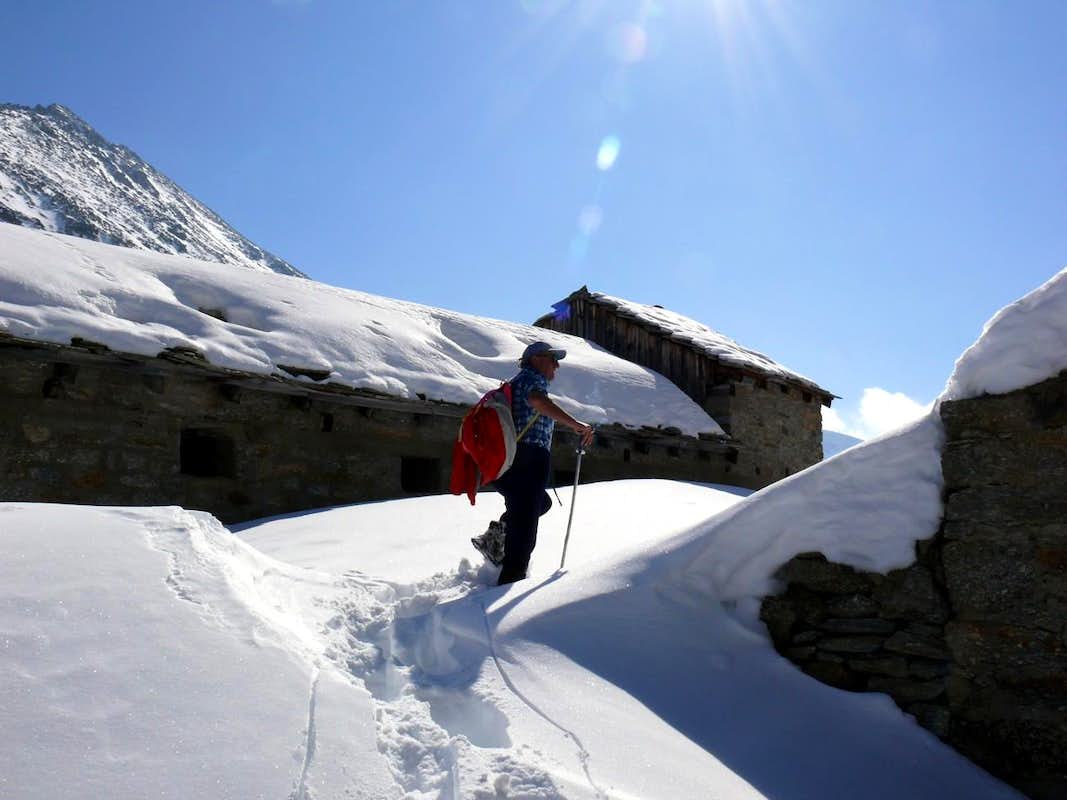