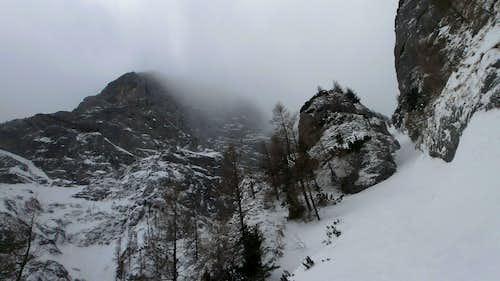 The Gălbinele valley is an affluent of the Coştila valley. There are two climbing routes up the Gălbinele: the main line leading directly up the wider gully (it is generally a scramble where you don't necessarily need a rope) and the secondary, northern line, which is a little bit more difficult than the main line and where a rope is necessary. The secondary line,which is less prone to avalanches, ends near the col of Strunga Colţilor. From the col you can rockclimb the ridge to the summit of Colţul Gălbinele(lor), whose elevation is 2244 m.

Follow a waymarked trail from the town of Buşteni (890m) to Coştila Refuge (1690m): red triangles then unmarked. Time of approach: 2 hours.

Here is the refuge on a contour map

Access to the Gălbinele Valley is from Coştila Refuge. From behind the refuge, walk up toward the Costila Valley then take the first path to the right. It is an exposed path that takes you over a side ridge into the main valley of Galbinele (at the end of the descent there is a chain that helps when the weather is bad).

Either line gives you a nice and interesting - albeit tedious - climb.

The main line (Firul Principal) has some steps where you need to do a bit of more challenging scrambling. From the main line a route branches off to the left to climb up over rock and grass to the Coştila–Gălbinele Ridge and Tavanele de Argint. After passing the cross of Andrei Ghițescu, you arrive at the "Gălbinele Hotel", a cavern which makes for a good refuge when it is raining. To the right of the "hotel" starts a route up a chimney called Hornul Coamei (1B). There are some interesting rockclimbing routes nearby. Further up on the main line we get to the starting points of such routes as Creasta Coştila (3A), Peretele Gălbinele (3B), and Slavoca (4B). At Strunga Gălbinele starts Coman (2B), a route up the Umăr (Shoulder).

The secondary, northern line (Firul Secundar) starts on a wild path, and it soon forks giving you two choices: direct up the line or to the left via Hornul dintre Fire (a chimney between the lines). The latter is easier on the way up and down also. In fact there are two chimneys: the first, shorter, leads onto a narrow rib between the secondary line and the main one and then there is the other chimney, pretty long, which turns into a path that leads to the final section of the principal line.

From the "hotel", if you continue climbing in the same direction, a path will lead you to a col in the Coştila-Gălbinele Ridge, which is called Strunga Gălbinelelor (2200 m). From the col, where the Gălbinele Valley has its superior ending, you can go down to the Scoruşi Valley, from where a path can take you to Brâna Mare a Coştilei and finally onto the plateau that forms the top of the Bucegi Mountains.

Strunga Gălbinelelor is between Umărul (to the west, toward the main ridge of the Bucegi Mountains) and Colţul Strungii with many alpine routes on the north face which falls into the Scoruşi Valley.


The secondary line of the Gălbinele Valley route ends at a col called Strunga Colţilor, where its possible to arrive from the north too, via the Colţilor valley. From Strunga Colţilor you can rockclimb the ridge to the summit of Colţul Gălbinele, which rewards you with nice views. 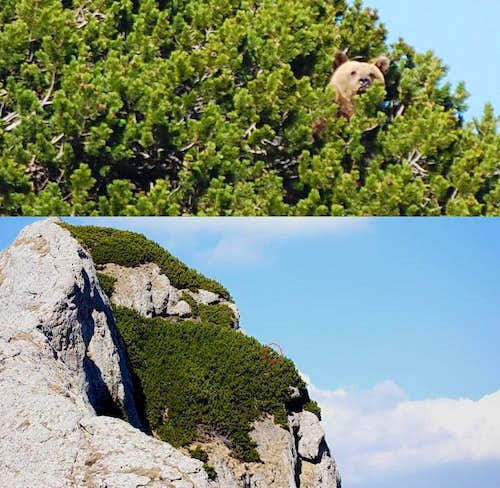 Rope (30m). There are pitons in each place where they are needed. 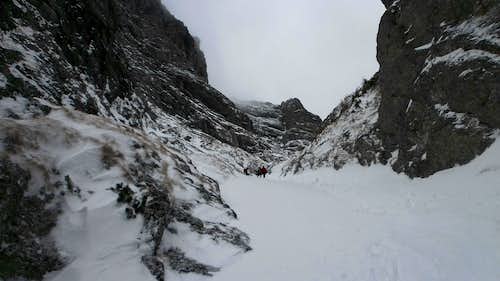 *I prefer the main valley in winter, because in winter there is no scree under your feet.