Valley of Aosta fluvial pages: Plan of the Work 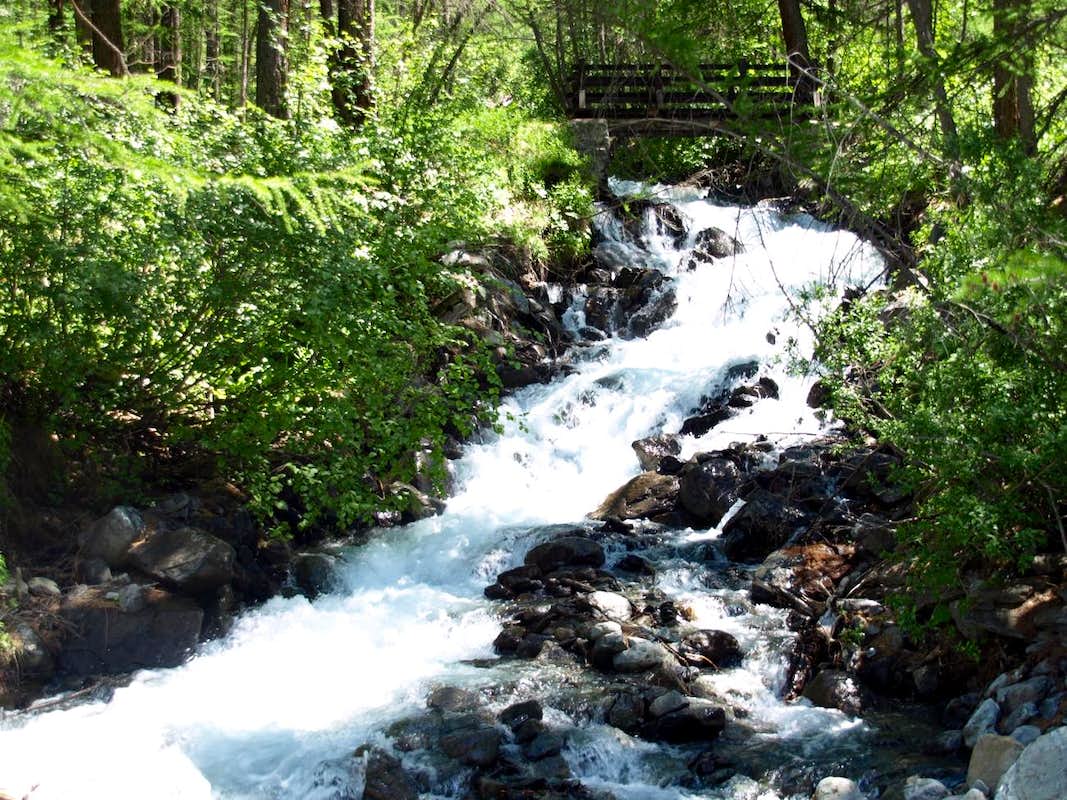 This page is intended to summarize the entire and complete Work Plan with respect to the most important small Torrents and Sreams of across Aosta Valley.
Born a little so improvised in now distant December 17th, 2013 with "Grisenche Valley", this idea of analyzing the main vallons and the valleys that exist in Aosta Valley took the substance, along the way, with the publication of other works related to the same topic. But, previously, since September 16th of the same year had taken start another series devoted to the analysis of this analogous and kindred theme with "ALL PASSES from PIEDMONT to AOSTA VALLEY's into SOUTHEASTERN Graian ALPS", though primarily targeted at Hills and then to step between Valleys and Walloons different. Since November instead began with "AOSTA VALLEY Southern Orographic and Hydrographic VALLEYS & small Valleys - First Part/A" a more targeted and more specific in an organic (same topographical division of the recent work with the same dascrizione in clockwise rotation from East to West and back) that had ended, after the publication of six separate and specific pages, April 3th, 2014 with "AOSTA VALLEY Southern Or. & Hydr. VALLEYS & small Valleys - First Part/B". This work was more gaunt and "telegraphic" the current, but had the advantage of their visit all the vallons or small valleys existing into the Valley of Aosta. Two complementar works and apparently similar, but to propose such substantial differences, with the latter becoming more descriptive and interesting, even with the mention of Mountaineering, Hiking itineraries, and more connected to the fabric of a relative valley. So a goal more matured over time not prefixed in relation to the large amount of work to be performed and the commitment required. Purpose highlighting what has been done and what still needs to be realized is an invitation to anyone who wants to participate in the drafting of the various valleys and numerous small vallons that still have not been described, and of which you will find in the clear highlight panels, just below.


This applies to the important all waters description inside the same.

Logically this case study corresponds to a similar one on the course of the waters that run through the same. The same can sometimes be scored by lakes at the beginning or intermediates, as well as be "broken" by one or more cascades of water. A "musical song" accompanying the cheering scene beyond sight even the hearing.
Meanwhile it is to be noted that all of the South Sector compared to Baltea was completed with the last publication in March of the page relative to "Conca d'Arpy" or Arpy Basin. 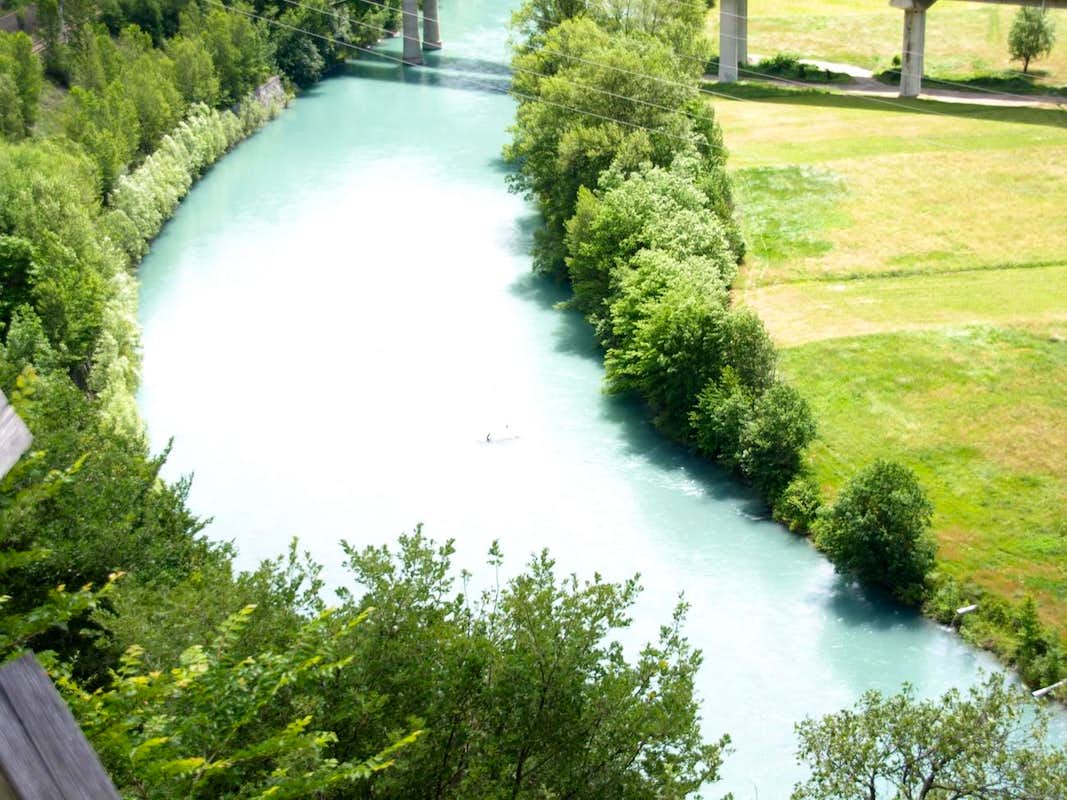 Dora Baltea towards Southeast in the middle Aosta Valley between Pontey & Châtillon Municipalities,

Clockwise and from East to West, starting from the Common of Pont Saint Martin to get towards Valley La Thuile and the adjacent Vallon of Little Saint Bernard.
So the whole sector bordering the Valle Orco-Locana-Ceresole Reale in Canavese Zone (Piedmont), as well as the border between Italy and France with Val d'Isere and the Tarentaise Sainte Foy has been completed; incluincluding the Valley of Saint Barthélemy, still further North the entire Valley of the Gran San Bernardo including Conca (Basin) of By-Ollomont and Valpelline. Finally the three valleys "noble", namely: Valtournanche or Valley of Torrent Marmore and still of the Cervino also Matterhorn above Châtillon, the Ayas Valley or of Evançon also Lyskamms over Verrès and finally the Lys Valley or Gressoney with the highest part Chain Monte Rosa and the foothills to the Southern border with Piedmont up to the Mombarone. About Val d'Ayas, to note that five major small valleys of its watershed Eastern with the Lys or Gressoney Valley are already been edited; can be attached to complete, in the course of future description of this valley. The four main focal points of this artificial division into four specific sectors, over the course of Dora Baltea which acts as a divider between the net everything which stands in the North compared to that which is collocated to the South, can be considered from East to West the Commons Pont Saint Martin, Saint Vincent-Châtillon, Aosta and Courmayeur. But the "heart" or, if you prefer the primary pin, is to be located in the old City of Aosta, the real balance of power within the right of Aosta Valley in the middle of Graian & Pennine Alps, as incidentally had already identified 2040 years ago the Romans, clearly prosthesis on
"Ancient Via delle Gallie" toward France, but also interested to dominate all the Valleys with its secondaries Vallons, exploiting the rich resources from all waters.

Southern Area in respect to Baltea:

Northern Area than the Dora Baltea: 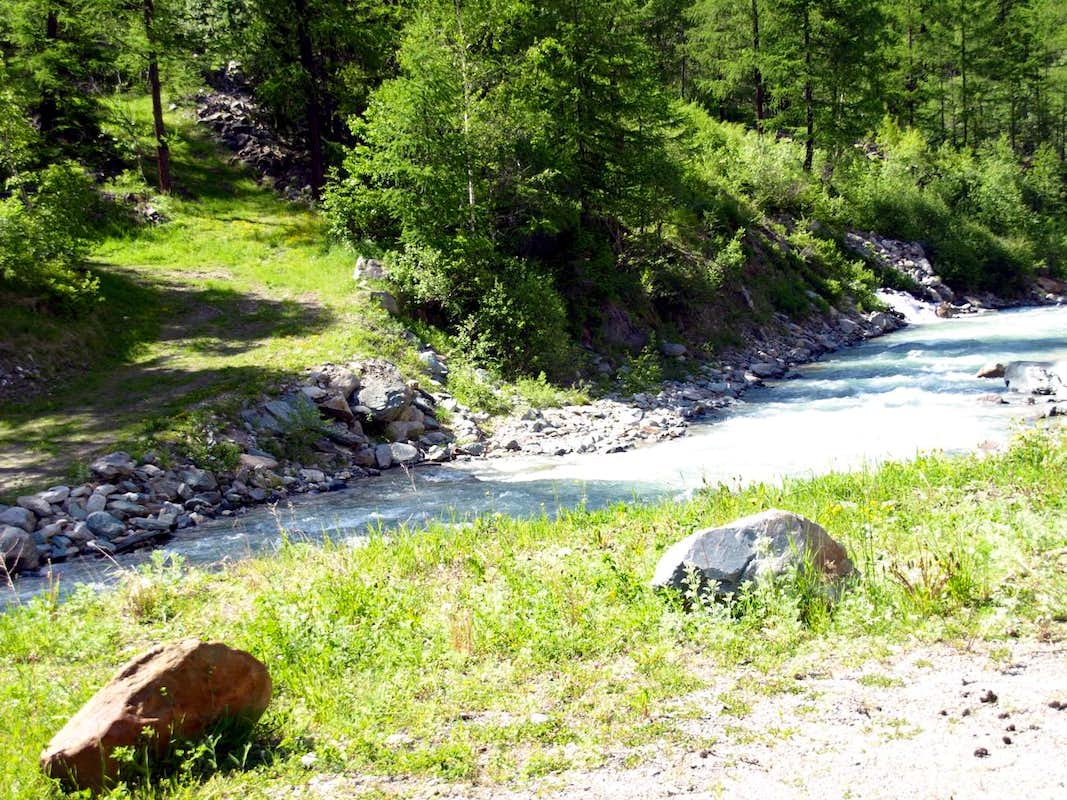 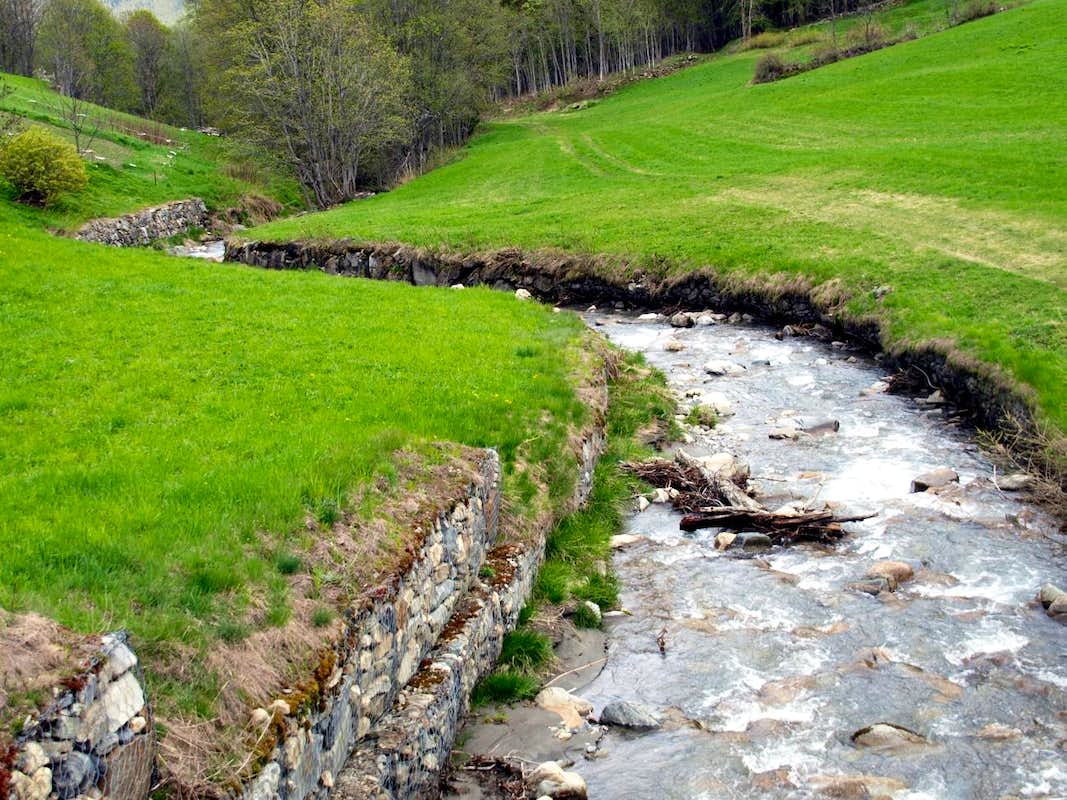 Enlarged Getting There to the whoole Aosta Valley 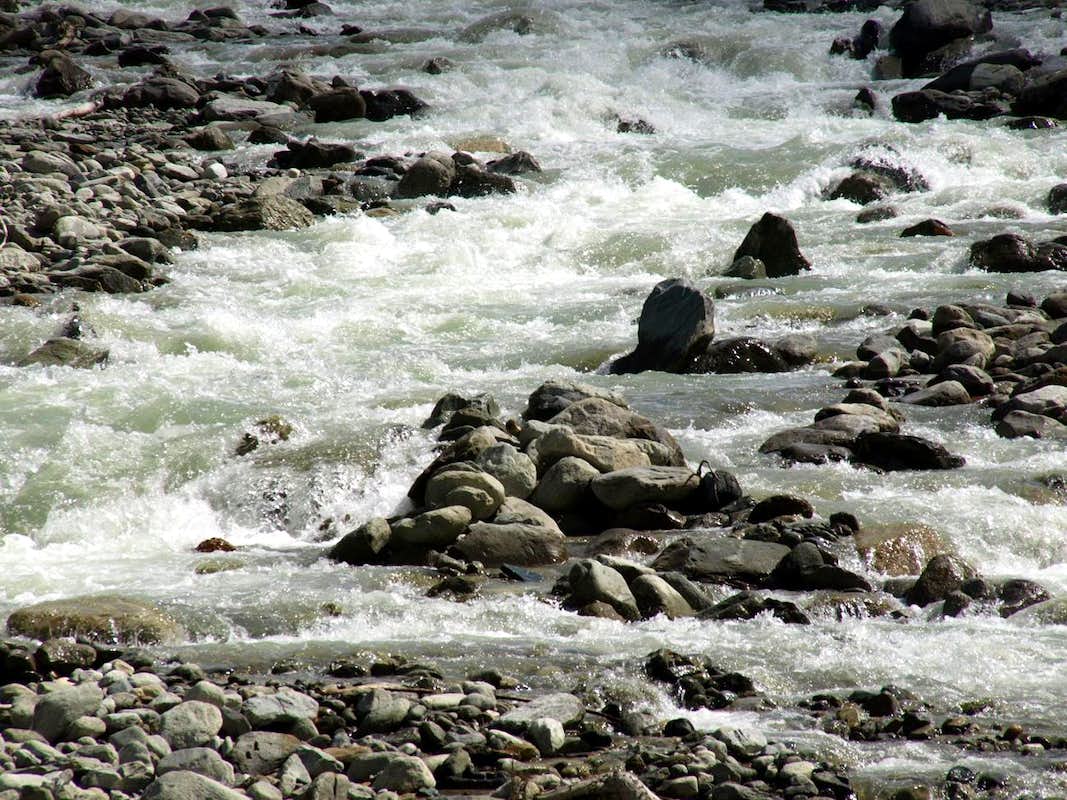 This box summarizes all valleys and gorges until now published and edited in SP, to which we attach an intimate marriage with a visit to their rivers & torrents.
As already explained in the same Overview not follow a strict topographic scanning in Sector Southern than in the course of Dora Baltea River, which however has been completed from East to West or from the "Lower Valley" towards the "Higher Valley" with Mountain Chain of Mont Blanc. Also have already been edited five vallons on the Val d'Ayas or of Torrent Evançon to Verrès Town, which anticipate the work in the North still almost completely to play. Moreover, as already above specified, lists six previous work on Valleys and Vallons of the whole Aosta Valley, are part of a series forerunner to this work, and more focused on the research of all the existing vallons, including the secondaries, smaller or semi unknown. Begun in September 2013, and concluded in April of the following year, offers the same features of the current and larger work but is more addressed to the "discovery" of the vallons than to a thorough scrutiny of the valleys. In any case, for all we know, can be considered an original work and unique; definitely complementary to the last of which can be seen as introductory and upon completion. The same job, turned to the valleys, he begins to find an "extension" to the discourse that is relevant to their rivers and streams of the same. To that end we find a first initiative with "In every Valley ... Rio Artanavaz (Arsy-Flassin-Citrin-Serena-Merdeux) 4" of February 10th, 2016 followed by a March 2th, 2016 with "In every Valley ... Torrents Buthier (Etroubles-St. Rhémy-en-Bosses-Ollomont-Valpelline) 5", both included in "My Areas & Ranges". From this initial and more descriptive idea it is moved to a more "exploratory phase" going to visit the streams or even the small torrents of the Aosta Valley, if not totally, at least in part of their course. The result is a combination of valleys and streams or torrents which then becomes more specific to the latter starting from "Along various & Dora Baltea (Southern Side)", edited June 16th, 2016. This first part, facing the Southern catchment waters area, is balanced against the next "Along various Torrents towards the Dora Baltea (Northern Side)" of July 17th, 2016 addressed to the Northern fluvial sector. So we will proceed with a single as "Along Grand'Eyvia towards Dora Baltea", or at most "grouped", analysis of the various streams as "Visiting seven Torrents complementary to Dora Baltea" of this December 4th 2016.
An idea to be implemented with projected speech to a long series of journeys and explorations for the next 2017, by this coming winter until early next 2018 ...

NOTEWORTY "READING ROOM" published in SUMMITPOST.org. to bring in My Areas & Ranges or in My Trip Reports 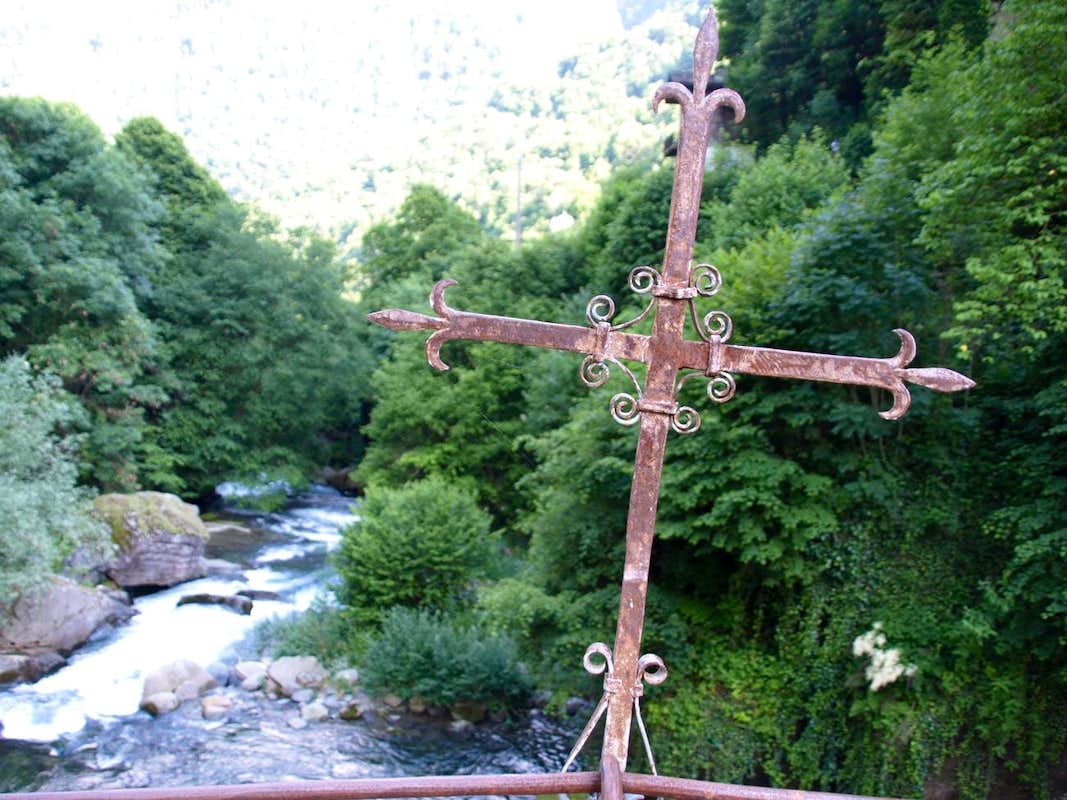