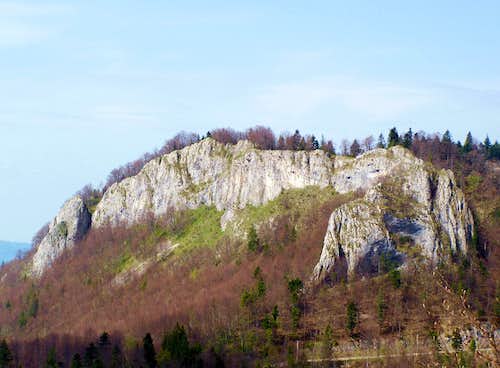 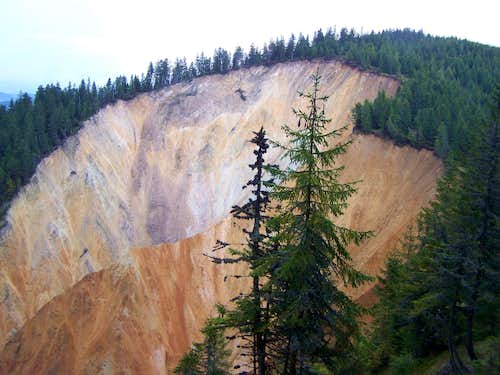 Groapa Ruginoasa
Hungarian name: Bak-hát. In my old Hungarian geography book published in 1905 the mountain is called Ruginosa-csúcs. In contemporary sources this name is not mentioned any more

In the following text I give both the Romanian and the Hungarian versions of the geographical names. Why? The mountain is in Romania, but it was part of 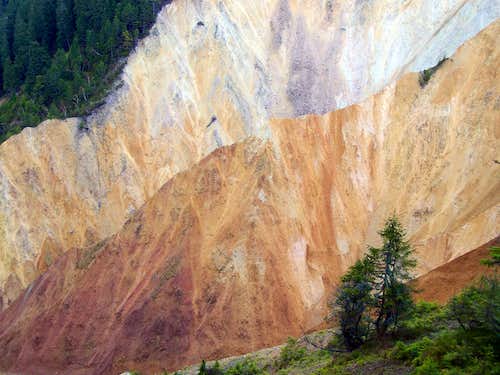 Groapa Ruginoasa
Hungary or the Hungarian Principality of Transylvania during 1000 years. And it is a favorite hiking destination for tourist who live in eastern Hungary and in Budapest

Road no. 75 crosses the Western Transylvanian Mountains in its „middle”, dividing the mountain range into a northern and southern part. The highpoint of this road is Şaua Vârtop/Bihar-hágó, with 1160 m altitude. Vf. Ţapu/Bak-hát with its elevation of 1475 m is the highest mountain on the north side of the saddle. Its peak is in north-western direction from the saddle, in 1.5 km distance. The peak just north to the saddle - Vf. La Trei Morminţi - is slightly lower.

The Western Transylvanian Mountains has a rich variety of rocks that compose this range: crystalline rocks, limestone, sandstone and volcanic rocks. Though Vf. Ţapu/Bak-hát is a very small part of the mountain range, it presents crystalline rocks, limestone and sandstone in its small area. This mountain is the point where the dominantly limestone areas of Padis interconnects with the mass of  Curcubăta Mare / Nagy-Bihar that is composed of crystalline schist. Traces of schist can be seen on the south-western slopes of Vf. Ţapu/Bak-hát. An attractive presentation of its limestone part is the western flank of the mountain, culminating in the limestone cliffs called Pietrele Negre/Fekete-kövek. And the eastern and north-eastern part of the mountain is made of quartz-sandstone – including the famous gorge called Groapa Ruginoasa/Rozsdás-árok.

Groapa Ruginoasa/Rozsdás-árok and Pietrele Negre/Fekete-kövek makes the mountain worth visit. Or I should rather say that visiting Groapa Ruginoasa/Rozsdás-árok is a must for those who are in the Western Transylvanian Mountains. The peak of the mountain is not specifically interesting: It is covered with spruce forest without view. In April the otherwise boring spruce forest is nice due to the thousands of crocuses everywhere. 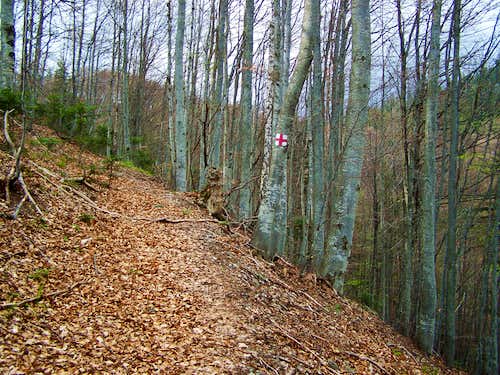 The trail marked with red cross 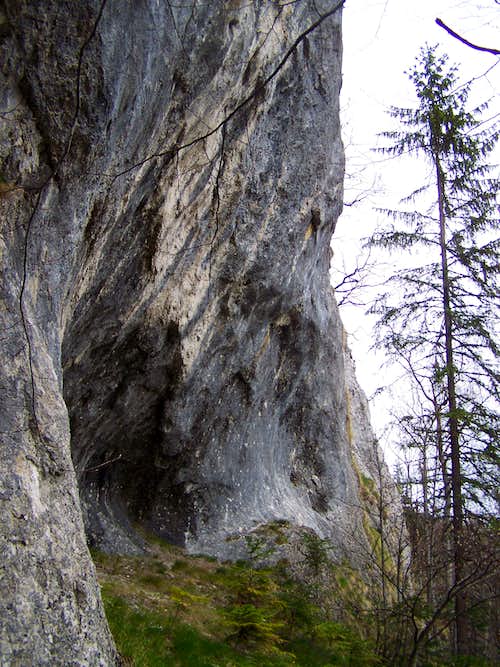 The rock wall of Pietrele Negre
Almost all visitors of Vf. Ţapu/Bak-hát visit only the spot of Groapa Ruginoasa/Rozsdás-árok. The easiest access to this gorge is from Şaua Vârtop/Bihar-hágó on the yellow trail. This route is short and not too difficult.

I also tried the trail marked with red cross. This trail leads from the direction of Baița/Rézbánya and you can walk along road no. 75 and along the cliffs Pietrele Negre/Fekete-kövek and finally you are almost on the summit of the mountain. This trail “red cross” is not maintained for long time, and it is in very bad condition. There is no trail leading to the summit itself but still its not a big challenge to walk up in the forest.

There are other routes from west and from north. I can't report you about their conditions. Please let me know if you tried any of them and so I will update this page with the information. 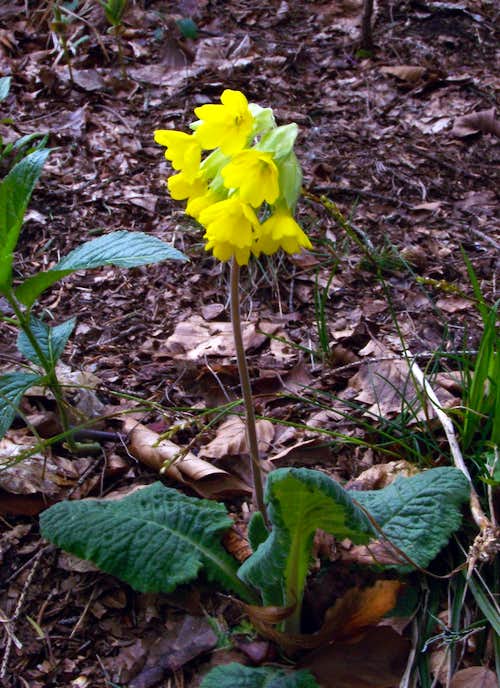 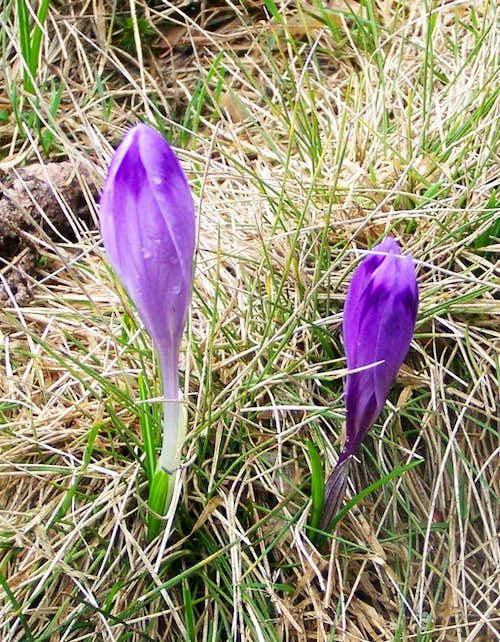 Crocus vernus
The mountain is within the boundaries of the Apuseni Natural Park. No entry fee applies. 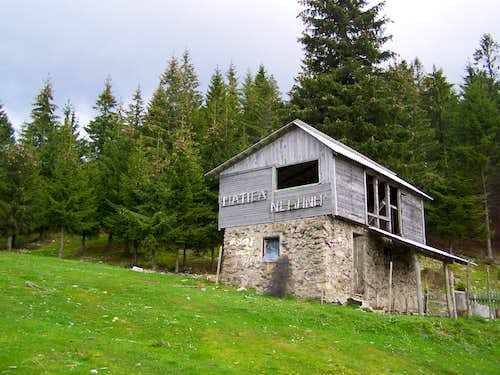 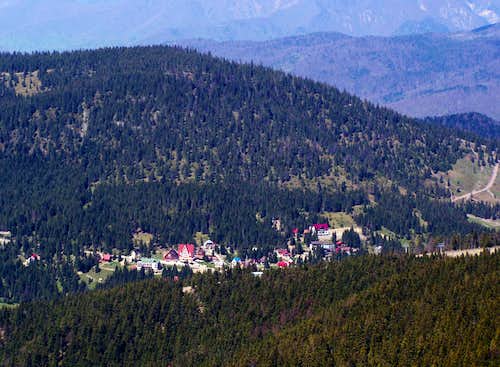 View of the Saua Vartop ski resort
There is an abandoned mountain hut on the western slope of Vf. Ţapu/Bak-hát. You can find several operating lodgings either at Şaua Vârtop/Bihar-hágó or in Arieșeni/Lepus. 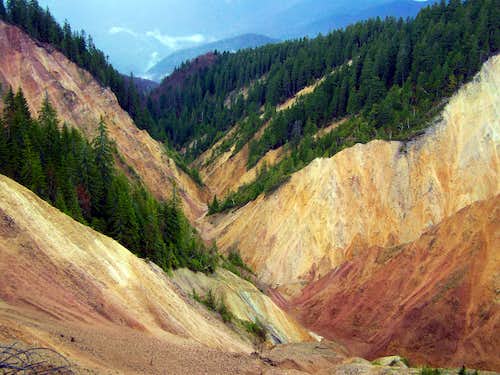 Many thanks for this page. Nice to know about Pietrele Negre. I added autumn shot of Ruginoasa hole (yellow striped trail from Vartop), remembering my 2011 excursion in the Apuseni Nature Park...

Hi Lukáš, It's a nice photo, thanks for adding it! You took it from inside the gorge, didn't you? Cheers,Szani