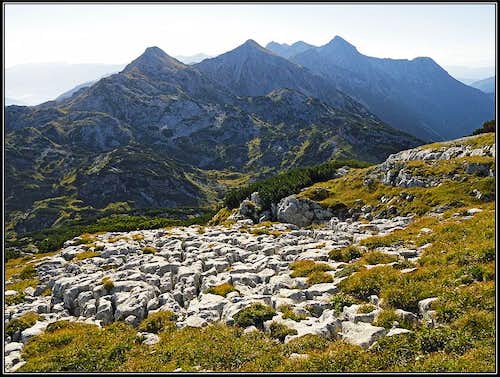 Karst on the summit of Velika Montura

Summit view - Triglav
The majority of characteristics of the area, where from the broad high plateau Velika Baba and Velika Montura are rising, has already been described on the page of the first mountain. As Velika Montura is still a distinct mountain let it have its own page, where I will mention only some more features.

If Velika Baba is closer to Dom pri Krnskih jezerih (hut), then Velika Montura is just above the path which connects Bogatinsko sedlo (pass) with Krn lake. Above the broad, shallow basin, west of the saddle, it rises only good 250 m, but still that is a nice mountain. The steep summit slope and absence of any marked path are the main reasons that an average hiker even doesn't think of ascending up there. But when it happens that you find yourself on top of it, you are very pleasantly surprised. First, it is the nice panorama, which attracts you. And secondly, perhaps even more, you are surprised by the fact that on top of that mountain there are ruins of a whole military village from the post World War I time. It looks that due to its central position above the plateau, Velika Montura was after the World War I heavily fortified by Itailans, in order to keep the new gained territory. We all know ruins of big barracks below it - on the small plane of Za Lepočami. But a whole town on the summit of a mountain - that's what you would not expect!

To ascend Velika Montura, you use the same trailheads as for Velika Baba (see please on that page), so the end of Lepena valley on the west and the end of Bohinj valley on the east. Or, you start the tour by mountain huts higher above the valleys - at Dom pri Krnskih jezerih or at the two huts on Komna plateau. 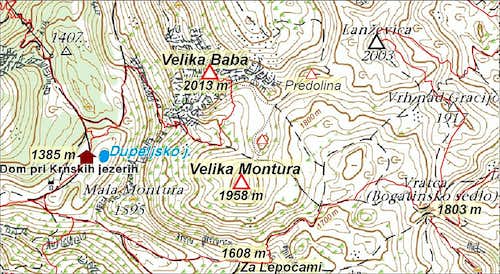 The most obvious one was also described on the page of Velika Baba. From the plane some 100 meters below Bogatinsko sedlo (pass), on the western side of it, you deter from the marked path which connect that saddle with Krn lake, and go in the north-western direction. You catch a tiny path, which goes up by the slopes of Velika Montura, surrounding the summit by its eastern side. A shallow, grassy valley brings you on the high saddle north-northeast of the summit, from which you scramble on top. The steep, rocky summit slope offers many passages, but it is best to look for remains ob military paths, as from the saddle to the top there were many fortifications. The plateau-like summit is overgrown with a nice, dense grass, behind the edge, looking towards Krn, there are remains of many buildings.

This route around the mountain was once not the only one. As on the plane Za Lepočami there were many buildings, also from there a mule track goes directly on top. Just north above the plane from the marked path the non-marked mule track deters towards the north-west and goes in a big arc towards the summit, just to the buildings. So, if you are not coming on top from Bogatinsko sedlo, but you are coming from the side of Krn lake, you can attempt the summit ascent also directly from Za Lepočami plane.

The third, also quite good option for summit ascent is from Dom pri Krnskih jezerih (hut). You go by the marked path which ascends on Velika Baba, but only till the high basin between the two mountains. From there you continue eastwards, directly on the saddle north of the summit, where you turn right and scramble on top. Of course we can combine the ascents on Velika Baba and Velika Montura into a nice round tour. It doesn't matter in which direction you do it, but it is best to go from one summit on the other one by the connecting ridge which goes from Velika Montura towards the north. 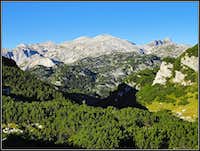 On Lepoče plain
They were listed already on the page of Velika Baba. Here they are: