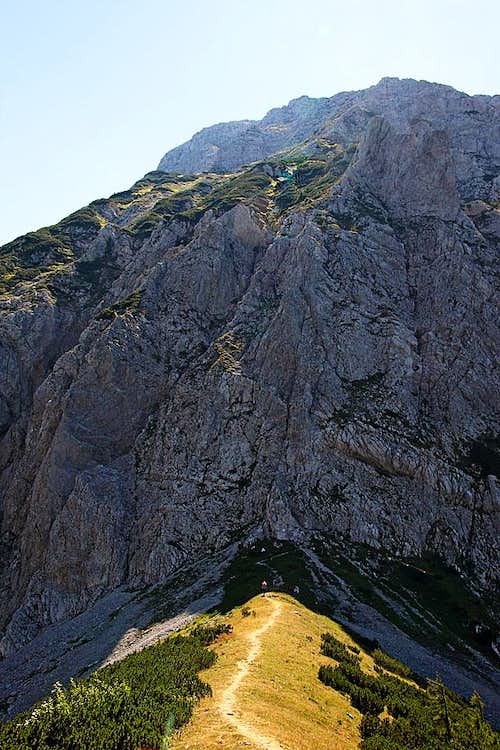 The northern ascent on Veliki vrh / Hochturm is much more demanding than the southern one. Today (2013) the path is well secured and should not be too difficult for experienced hikers who are also used of easy ferrata sections and have safe step on unsecured, steep terrain. The scenery along the route is very nice.

Difficulty: The first 100 altitude meters are an easy ferrata (B on Austrian scale), the remaining 300 m are a steep, marked path which is not secured and requires safe step on some more exposed places (on the Swiss Hiking Scale T3/T4). From the saddle you have 1 hour on top, from the trailheads in the nearby valley 3 hours.

Gear: Only good shoes and poles.

Logistic: Unfortunately, the northern approach on Veliki vrh / Hochturm can not be nicely combined with other routes in a round tour. Those, who reach the saddle from the Austrian side, would have a few options to get down from the Košuta crest more on the east, but those descents are not easy and the tour would be quite long. Those who start below Ljubelj pass, on Slovenian side, could descend to Kofce and then towards Matizovec farm and down to Podljubelj, but then they would still need to hike up along the main road to the trailhead. So, most recommendable are the tours, on which we make a round trip in the area of Košutica and Korošica meadow, then from Hajnž saddle jump on Veliki vrh and return, and then complete the round tour. For possibilities see more on the page of Košutica.

See the main page of Veliki vrh how to reach the following two trailheads for ascending Hajnževo sedlo (saddle):

1. The highest curve on Ljubelj pass main road (on Slovenian side), 1000 m. You can also start the tour 100 meters lower, below the monument to victims of Nazi concentration camp - there a mountain road deters towards the NE. From both trailheads we have some 2 hours of good paths (in the second case below we have a mountain road) to reach Hajnževo sedlo, 1701 m.

2. On the Austrian side the trailhead is at the abandoned Hajnž farm, 988 m, or at Škrbina inn (even more remote), 1035 m. In the first case we have also good 2 hours on the saddle, in the second some 30 min more. 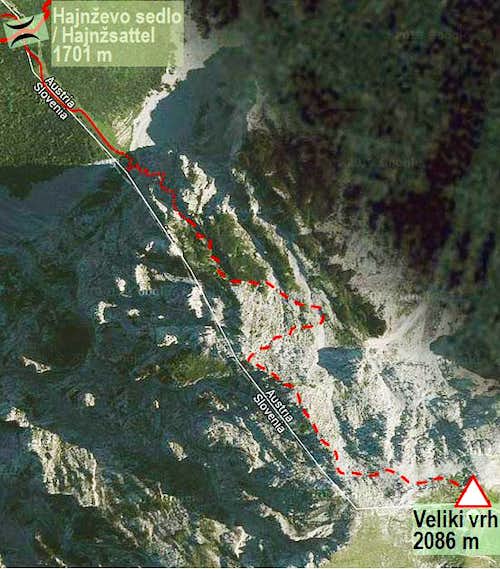 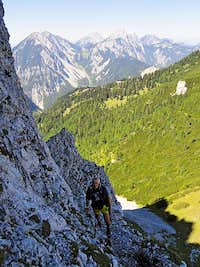 In the ferrata section 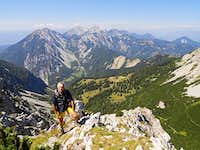 On the N ridge

From Hajnževo sedlo (good inscription plates there) we go towards the south where in a minute or two we reach the vertical rocks of Veliki vrh. There the ferrata starts.

The first sections are steep, but due to the fact that they use natural passages, not hard. There is enough pegs to step on them and a good steel cable accompanies us all the time. Soon the route crosses towards the left and then again climbs through a narrow ravine up.

Above that section some 20 meters of a steep, crumbly slope come, where the route is not protected. There some more care is needed, the place is especially unpleasant on a descent. Above, the steep, rocky section soon ends and the path exits on a slope, overgrown with dwarf pines.

The second part is still steep, but a weak path leads us in turns up and there is no big need for protection devices. Occasionally we grab a bush branch or a rock, on some narrow places a bit more care is needed, but overall its a T3 difficulty hike up. Another 100 meters higher we cross a crumbly, again more steep terrain more towards the right and reach the rocks of the northern side ridge. We climb some rocks and go up in turns, where the path again uses the best passages in the steep terrain. When reaching the rocks of the N ridge, the trails becomes more exposed. Good marks lead us mostly by the ridge itself, until reaching the top of it. There the trail leaves the ridge and starts crossing the slopes towards the left. The summit is already close, when we see it, we have only a few more easy turns up and the highest point is reached.

As said, we return to Hajnževo sedlo by the same route.

Here, a valuable remark can be done how to return best on Ljubelj road (Slovenian trailhead, the western one). Don't follow from Hajnževo sedlo the marked path towards Korošica meadow and then by the mountain road down. From above the saddle, immediately after you exit the ferrata, simply turn left and go by unmarked trails over the scree slopes. They are great indeed. Never slide by a soft scree too much down, but keep on the trail, always just below the walls of Veliki vrh. Only at the end, where you already see the road, slide down and continue by it. That shortens the whole descent a lot!