Right in the heart of the volcanic island of Gran Canaria there is one of the most famous monoliths in the world : Roque Nublo. Composed of basaltic rocks, Roque Nublo is an emblematic spot of the island. It's the second highest peak of Gran Canaria, after the 1949 meters of the adjacent Pico de las Nieves, being located on an elevated rocky plateau named Tablon Nublo, in the middle of a lunar landscape. The name, which means Cloudy Rock, comes from Roque Nublo's habit of disappearing into clouds and mist that sometimes surround and hide the summit of Gran Canaria. Its stunning outline is already visible along the approach path and its orange colouful walls, vertical or overhanging from anywhere they are observed, are an irresistible attraction not only for climbers, but also for hikers and tourists. The lunar and flat platform that hosts the pinnacle is therefore a primary destination for many visitors, attracted by the primitive and unique beauty of the place.

Roque Nublo and its brothers

The monolith has 14 climbing routes, divided between the South East wall, where are located the longest routes, and the brief North East wall; while not more than 90 meters high, Roque Nublo doesn’t present any climbing routes of medium difficulty and the Normal Route to reach the summit, Via Alemana, despite being a short climb, it's definitely a challenging route involving a hard climb. It was the first route to be opened on the Roque Nublo and now it’s the most classic and the most frequented climb to reach the top.

It had been originally realized in artificial climbing by a team of three German climbers. The experienced climbers can now overcome the route in free climbing (grading 6b) or in mixed climbing (V+ and A0).

Getting to Gran Canaria

Gran Canaria is a top tourist destination and its airport is easily accessible both with direct flights from several european airports and with a stopover in Madrid, from where you can fly to Gran Canaria by means of regular Iberia flights. Gran Canaria airport is located on the Eastern coast, close to the town of Ingenio. Getting to Roque Nublo Roque Nublo is situated in the middle of Gran Canaria. It can be easily reached by a well developed road network from different places on the island.

- From Telde on the E coast take the road GC130 towards Pico de la Nieve. Passed Cuevas Blancas the road joins GC 130 coming from Ingenio. In its upper section the road reachs also GC150; follow this latter for a few metres, then turn to left onto GC600 towards Ayacata reaching the parking lot near Roque Nublo.

- From Ingenio on the E coast take the road GC120 toward Pasadilla, joining the road GC 130 coming from Telde and then as the previous point.

- From Maspalomas to the South take the road GC60 direction Fataga and San Bartolome de Tirajana to the saddle Cruz Grande. From the saddle stay on GC60 until you get to Ayacata. Turn onto GC600 getting the parking lot near Roque Nublo.

A brief demanding climb on excellent rock, allowing to reach the top of this incredible piece of rock! 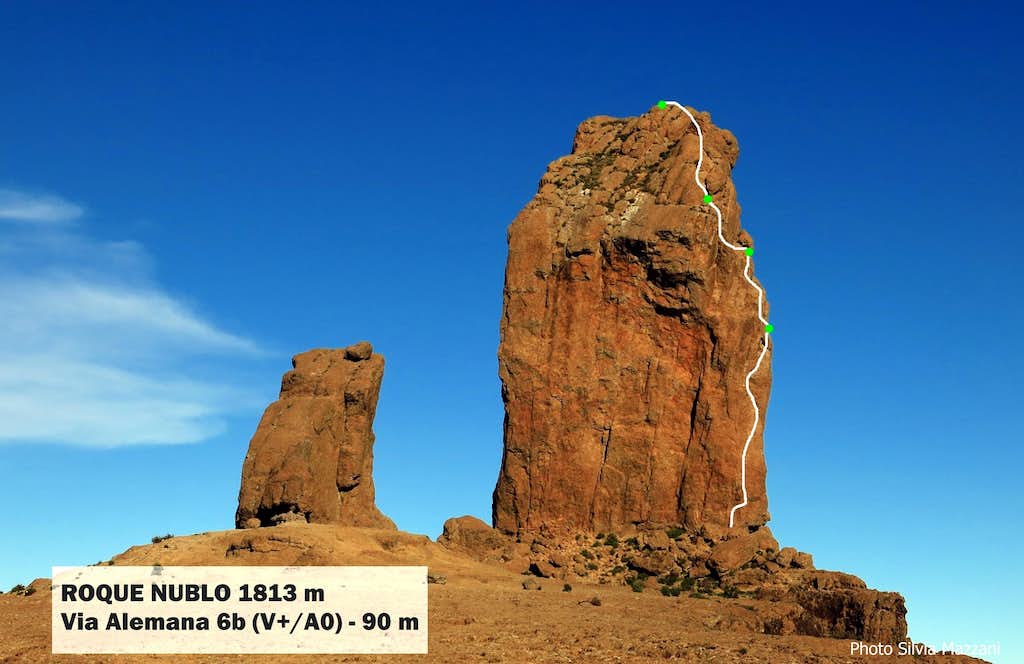 Approach - The approach is easy and quick. From the parking lot take the obvious path from which Roque Nublo and its surrounding spires (El Fraile and La Rana) are already clearly visible. In about 15 minutes by walk you will reach the impressive rocky platform just in front of Roque Nublo. The starting point of route Alemana is close to the right edge of the East wall. Once getting the base of Roque Nublo, skirt the rock towards right getting soon the start of the climb.

L1 - Starting point on the right end of East wall just near the edge. Start directly then diagonally to the right following the numerous pegs, at first up a steep wall with few holds, then up a dihedral, getting to a convenient belay on a huge leaning block 6b or V+ and A0, 45 m.

L2 - Climb the vertical wall immediately above the belay, then on easier ground to a comfortable ledge under the final wall. 6b or A0, then IV+, 15 m

L3 – Traverse easily to the left and then up the edge of the overhanging cliffs to a belay at the beginning of the summit rocks IV, III 20 m.

L4 – Slanting right on solide slabs up to a vertical dihedral leading to the easy final crest ridge and to the wide summit III, IV, 30 m.

Descent: downclimb the last pitch. At the belay on the right (facing in) it starts the abseils line. With three abseils (20, 20 and 50 meters) you will reach the base of Roque Nublo just to the right of the edge.

Roque Nublo was declared as a natural monument by Law 12/1987, of June 19, Declaration of Canary Island Natural Areas Natural Park Summit and reclassified by Law 12/1994, of December 19. 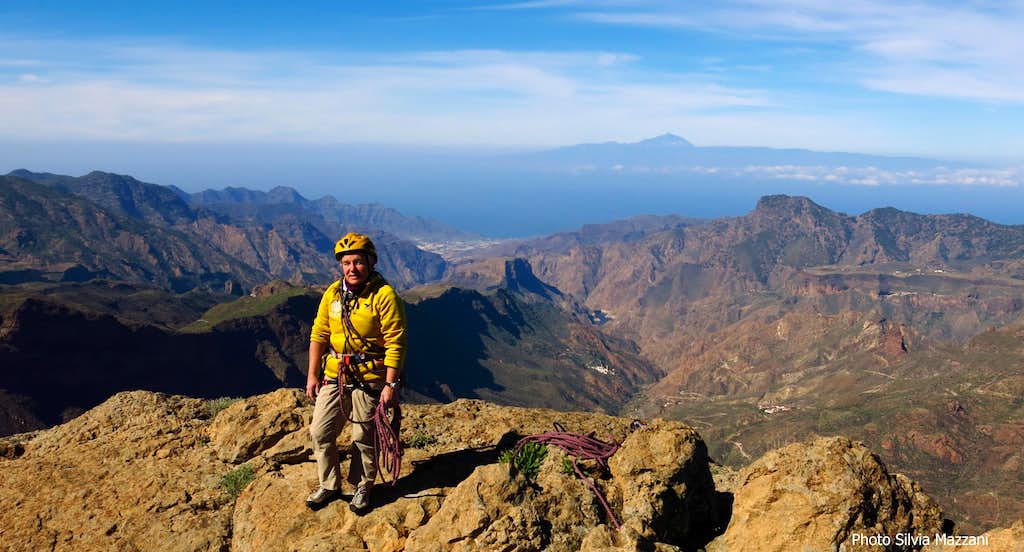 Summit of Roque Nublo and Volcan Teide on the horizon

The Nublo Rural Park, the largest natural area in Gran Canaria, includes a range of natural beauties and the main symbol of the island: the monumental lava plug of Roque Nublo. The 26,000 hectare park was recognised by Unesco as a Biosphere Reserve. It hosts natural areas of rich biodiversity full of unique plants, from Canary pine forests to arid plains at the mouths of the valleys.

Anyhow there is no particular restriction in climbing and no fee is due. Hiking is limited along the marked trails. Camping is allowed only on the designated sites. Read more here: Roque Nublo Rural Park

Near Roque Nublo there are some campsites maintained by OIAC. Pay attention because a permit is needed, anyhow you can daily reach the spire starting from everywhere on the island. Gran Canaria is a primary touristic destination. Of course there is no problem to find suitable accommodation, from hotels, to agriturismo, bed and breakfast, renting rooms and apartments. 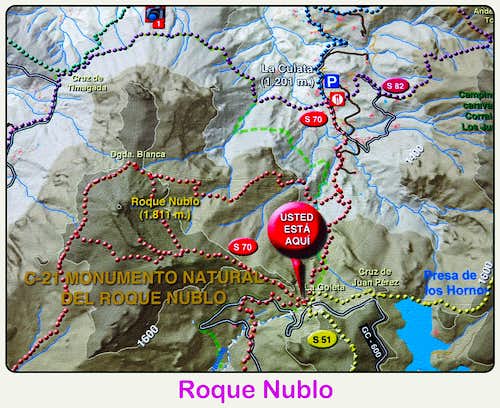