NOTE: Sean Maher reports that he found the cable missing on January 1, 2017. Perhaps a new cable will be put in place, but until then, this is a trad route, roughly UIAA grade IV. The crux is at the start. Bring a rope and a few pieces of protection.
Gran Canaria, the third largest of the Canary Islands, is well known as a rock climbing destination. What’s less known is that the island has quite a few excellent via ferrata’s, including the longest via ferrata of Spain, La Guagua. The main via ferrata’s on Gran Canaria, worth visiting, are: The via ferrata Baviera is located in the center of Gran Canaria near the village of Ayacata, in the area which is known as a traditional climbing mecca of the island. To east of Ayacata is a huge basalt wall, towering just above the road GC-60. A distinctive rock buttress (which resembles a giant troll trying to say "Ooh") in the middle of that wall helps you to get your bearings as the via ferrata goes up just to the left of it, on a rock pillar and in a shadowy gully between the pillar and the ”troll-face” buttress.

Via Ferrata Baviera: overview of the route
The via ferrata Baviera is relatively short, ascending about 140 meters from the base to the top. The route is secured by thin iron cables, attached to the same type of bolts that are used to equip sports climbing routes. Apart from that, there are no other climbing aids, such as stemples, bars etc. Apart from being thin, the cables are also slack, and as such, not very useful for pulling yourself up over difficult sections. There is no escape route before the end of the via ferrata. For the Via Ferrata Baviera you need to have certain climbing skills. This is not a route for beginners. 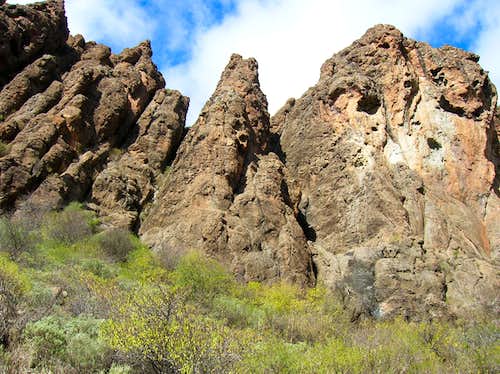 Looking up towards the route


Getting There and Where to Stay

The green paddle points at the start of the route. Zoom in for a closer view, or Click here to view a larger map

There are buses all over the island, and connections are good, but if you want to be flexible, consider renting a car. We used Cicar.

The village of Ayacata is a very small place in the center of Gran Canaria, at the junction of the roads GC-60, GC-605, and GC-600. It can easily be reached by public transport or by car. Although the distances on the island are relatively short, the twisting mountain roads take time. Starting at the airport, via the GC-65 to San Bartolomé de Tirajana and then north on the GC-60 takes a bit more than an hour.

If you are on a budget, or otherwise like camping, it is advisable to stay in one of the free public campgrounds in the center of Gran Canaria. However, you need a camping permit, which must be applied for in advance, and subsequently collected in person in Las Palmas, the capital of Gran Canaria. Wild camping is prohibited, and rangers patrol regularly on the camp sites to ensure compliance with rules.

The route is located just outside the village, within a short walking distance.

The Via Ferrata Baviera is about half a kilometer outside Ayacata on the road GC-60.

If you arrive by car, you can either park in the center of the village, next to the only pub, located just after the junction of the GC-60 and GC-600, or in one of the few dirt laybys a little further towards Tejeda on the GC-60. The last parking opportunity is about 1 km out of the village, where there’s a tiny dirt layby, good for 2 cars. If you park there, you have to walk back towards Ayacata for about half a kilometer.


To reach the via ferrata Baviera, walk from Ayacata half a kilometer west on the GC-60 (watch out because of the passing traffic) and then turn to the right onto a rough path leading through bushes to the base of the via ferrata. The start of the path is not signposted, but is easy to find. Use the abovementioned distinctive “troll-faced” rock buttress to get your bearings, and aim towards a dark gully on the left of the buttress. It takes about 5 minutes to walk up from the road to the base. The last meters of the path are not so obvious, you just have to look for the easiest way through the bushes to the rock face.

The first section, being almost the first third of the route, is vertical, fairly hard climbing with small holds. It doesn’t get much easier until, on approximately halfway up, the route traverses to the right into a wide shadowy gully. Most of this traverse goes up via a wide crack, which leads to a rock shoulder in the gully.

After a short walking/ scrambling section the route then continues up on more vertical terrain. In the upper part of the gully the route is blocked by huge boulders. There’s a small opening between one of the boulders and the vertical rock face on the left. You need to squeeze yourself through that gap in order to continue. Note that the cable abruptly ends a few meters below the gap, leaving the rest of the route unprotected. This part (the last one-third of the route) involves climbing up to UIAA grade II. The final section above the gap is unprotected but easy scrambling leading to broken slabs on the edge of a pine forest at the top of the via ferrata. 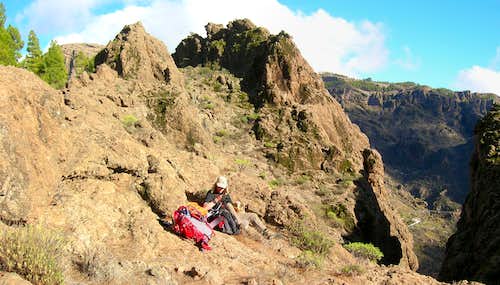 From the top of the via ferrata Baviera there’s a rather poorly marked trail back down to the Ayacata village.

After topping out on the via ferrata turn to the right and walk a couple of tens of meters east on the rocky terrain along the edge of the pine forest. On one of the big boulders there’s a small hardly noticable cairn. At the cairn, turn to the left into the pine forest, where you should see another small cairn on the ground. A little further from that cairn is the first marker on a stone (a pale yellowish paint stripe). Keep looking for the markers (and some more tiny cairns), which lead you further down on a vague and intermittent path on the back side of the huge rock wall above GC-60.

A little further the pine forest ends and the route turns to the right following a wide rocky couloir. From this point onwards the descent route gets more steep and difficult, with a few sections requiring easy scrambling on rocky terrain. There's no obvious path anymore. Keep looking carefully for the paint stripes, as it is easy to loose the right way down. Aim roughly for the last houses in Ayacata on your left, but by no means traverse too far to the left, though it can be tempting at times.

The last meters on the rocky terrain are not marked, just keep going straight down, until you enter dense vegetation. You can spot the path by looking for half-cut agave plants further down. Continue carefully through the vegetation, which makes you feel as if you were on a true jungle path. The path ends in a bush next to an iron gate on your left, and only a few meters from the GC-60, past the last houses in Ayacata.

The start of the descent route

Take the standard via ferrata kit, including a Y-shaped lanyard with 2 carabiners, harness, and helmet. Leather via ferrata gloves are optional, as the cables are too thin anyway for comfortably grabbing them for aided climbing. A rope (50 m will suffice) as well as a few extra carabiners and slings might be a good idea to take along for belaying the second over the steep first section, or for the last unsecured section, if need be.