Gran Canaria, the third largest of the Canary Islands, is well known as a rock climbing destination. What’s less known is that the island has quite a few excellent via ferrata’s, including the longest via ferrata of Spain, La Guagua. The main via ferrata’s on Gran Canaria, worth visiting, are: The Via Ferrata Primera Luna is located in the Berriel Gorge (Barranco El Berriel in Spanish) at the south coast close to Bahía Feliz and San Agustín.

The route is relatively short, as are all the Berriel Gorge via ferrata’s, ascending about 140 m meters from the base to the top. The route is secured by thin iron cables, attached to the bolts.  There is an escape route about halfway up the via ferrata.

The Berriel Gorge via ferrata's: overview. Primera Luna is the blue route.

Getting There and Where to Stay

The green paddle points at the base of the rock face at the end of El Berriel. Zoom in for a closer view, or Click here to view a larger map

There are buses all over the island, and connections are good. There is a bus stop at Bahía Feliz on the GC-500, from where the approach takes less than an hour on foot. If you want to be flexible, consider renting a car. We used Cicar.

San Agustín is highly recommended as a base to stay during your adventures at the south coast of Gran Canaria. It has a sandy beach and somewhat less crowded than the popular beaches further west. There are several supermarkets, including a small very easily accessible HiperDino just beside the GC-500, which passes through the town.

San Agustín Beach: a nice place to take a dip in the Atlantic Ocean after climbing in the Berriel Gorge

Wild camping is officially prohibited anywhere on the island.  Overnight bivouacs are at your own risk, use the common sense and keep a very low profile. And, of course, do not leave any trace.

The route is located in the Berriel Gorge (Barranco El Berriel in Spanish), about 30-45 minutes walking from the last parking lot.

From the parking area behind the tunnel over the GC-1 head straight uphill on a dirt road, which is closed down for public traffic by a metal barrier at the hilltop. Continue further north along the road, towards a dam wall in distance.

The road leads you around a hill to a small flat plain. Upon reaching this flat area you see a marker on a big stone on your left – the green letters VF with an arrow pointing to the left, painted on white background. 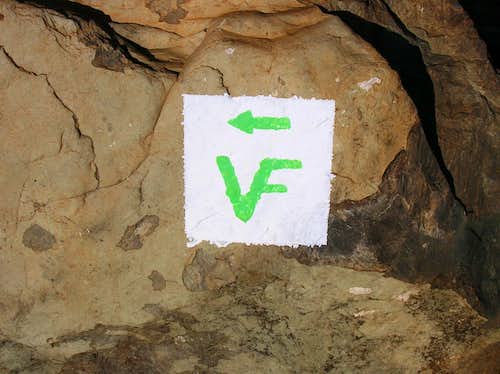 
Turn to the left here and follow the 4WD trail for about 700 meters into the Berriel Gorge, until the trail ends with a flat (parking) area. The via ferrata’s are located on a cliff face on your right. Particularly, the Via Ferrata Jesús Beitia can be seen from far away due to its distinctive ladders. 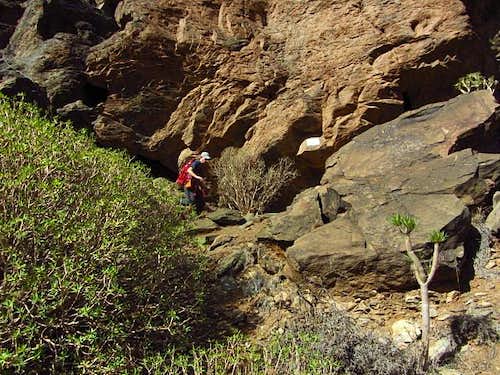 Approaching the start of the Via Ferrata Primera Luna
The route starts with a short diagonal traverse to the left, followed by a vertical section, which leads you past a series of  caves until you arrive at the juction with the  exit route (marked!). Continue further to the left until the route suddenly drops a few meters. The downclimb is followed by a short but airy and slightly overhanging horizontal traverse, which ends with a complicated step to reach the first stemples on a vertical wall. This is the crux of the route.

The vertical stemples section then leads you  up  to an easier terrain, not secured by cables. It takes a moment to figure out the right direction. We saw a cable further on the left, but there was also one inside a huge crack, while looking straight up. As the crack seemed to be a far more interesting choice, we decided to continue through it.


Obviously birds liked the crack too, as its lower part was covered in bird droppings.


A series of stemples lead you up and through the crack. It is interesting climbing, with the crack providing welcome shade from the sun. Just before exiting from the crack you have to make an airy step over the depth.


Once out of the crack, walk to the right towards a short fairly vertical wall, where the cabled route continues. This is the last vertical section of the route. After finishing that, it's easy scrambling to the top of the via ferrata by following a vague path over a few rock steps. 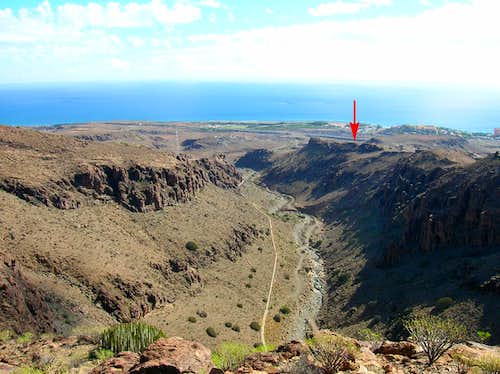 View from the top: the red arrow points at the parking lot
From the top of the Via Ferrata Primera Luna there’s a well marked trail back down to the base of the route.

After topping out on the via ferrata continue slightly further uphill following small cairns. These will lead you to the start of the descent path, which is marked by pale yellowish paint on stones. As the trailhead is a well-trodden path, it's fairly hard to miss.

In the beginning, the path is fairly easy to walk on,  descending gently past huge cacti. Further downhill you need to descend a steep gully with fixed ropes in place.  Once out of the gully, keep looking for the markers on stones as the terrain is rather rough without a clear path at times.  The descent route takes you eventually back to the start of the Via Ferrata Primera Luna, by first passing the start of the Via Ferrata Jesús Beitia.

Take the standard via ferrata kit, including a Y-shaped lanyard with 2 carabiners, harness, and helmet. Leather via ferrata gloves are highly recommended. An extra quick-draw is useful for occasional rest breaks on the most difficult sections.