In my opinion, this is one of the most aesthetic standard non-technical routes to any of the peaks in the NCA.

Oak Creek Canyon is absolutely gorgeous, particularly in spring and in the depths of the back canyon, when the melting snows from the mountains above send their waters down into the deep sandstone canyon. The result is spectacular cascades, the constant sound of rushing water, and even the occasional waterfall. Oak Creek runs year-round, but spring is unquestionably the best time of year to be in the canyon. The appeal of this route is not just the creek-- the remainder of the route also covers some beautiful ground with stunning views of the Red Rock backcountry.
Although there are shorter scrambling routes to the summit of Rainbow Mountain, they involve exposed Class 5 terrain. This route keeps things at Class 4, and it is highly scenic as well from the moment you leave the car until the moment you reach the summit. Also, it is a fun route, lacking the boring slog to the summit that the route to Mount Wilson from Oak Creek Canyon entails.

Please note-- I have adopted this page, with permission, from the original owner. His beta is good, so I have kept it intact, but I wanted to add photos and some commentary. In the following sections, my comments are in italics.

There are a couple of starting points for this route:

2) You can avoid the fee and the one-way loop drive by parking at the unmarked but easily seen trailhead for North Oak Creek Trail located along SR 159 a short distance west of the loop drive's exit.  This, of course, adds some hiking distance each way-- 0.9 mi. Hiking in from the signed Oak Creek Canyon TH off 159, which reaches the canyon via South Oak Creek Trail and the Chinle Trail, adds 1.5 mi each way-- definitely not recommended unless the other TH off 159 is closed for some reason.

Here's how to get started -

From either of the trailheads, follow the well-marked trail to the mouth of Oak Creek Canyon.

Now, I'm not going to try to over-complicate things by going into too much detail. The beginning of the route from the mouth of the canyon is rather simple, actually. Once the mouth of the canyon is gained, continue into the canyon, seeking out the path of least resistance, which is generally Class 2-3, hopping up and around and over and sometimes even under massive boulders, sometimes crossing over little streamlets or working your way around cascades and small waterfalls, taking right forks in the canyon as they come, and ultimately work your way to the end of the main canyon where the yellow sandstone meets the gray limestone of the peaks in the rear. You can't miss the geologic transition. It's painfully obvious.

Once this area is reached, start at any point and head north up the yellow sandstone talus slope above. It's tedious at times but generally easy and sometimes even enjoyable scrambling. 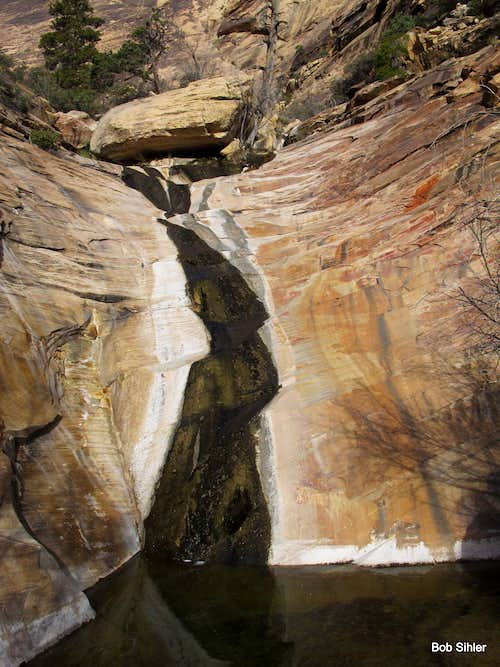 This is probably the crux of the canyon section. You can bypass this waterfall on either the left or the right via exposed Class 3/4 terrain. The left side is shorter but harder, and more exposed. 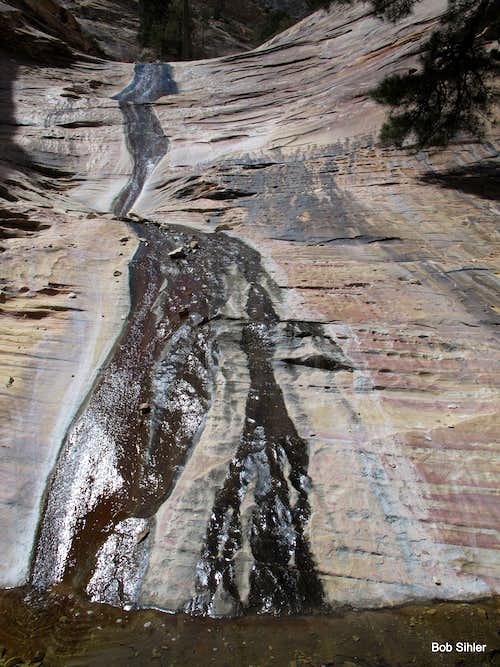 Last major waterfall in the canyon

The slope starts out a little steep but mellows out in a short time. As the slope levels off, look for a faint use trail heading easterly. Follow it.

The next part of the route is hard to explain.  While on the mountain, it is a little hard to follow.  Good route-finding skills and a little trial and error will get you there nonetheless.

The use trail will continue easterly for a hundred yards or more and then start traversing northward around the edge of a steepening slope on your left. Follow the trail northward a couple hundred feet to the bottom of an obvious ramp slab. Leave the trail and head up the ramp. 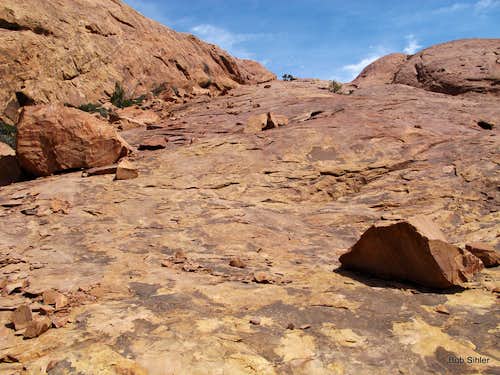 When you reach this (it's hard to miss it), follow it to the ridge above.

From the top of the ramp, you will be able to see Bridge Mountain and the other awesome crags of the northern Red Rock backcountry for the first time on the route.

From this point, you may be tempted to continue east and up a ledge system to higher ground, but don't. Instead, start traversing northeasterly along the north side of the ledge system over class 2-3 terrain (note the route for your return, as it's amazing how class 4-5 terrain seems to materialize out of nowhere) and aim for the base of a prominent cliff that is 1/4 mile or so ahead of you.
It is excellent advice to avoid the temptation to continue east up the ledges; I went that way and cliffed out, which cost me some time and energy.
From the base of the prominent cliff, follow a use trail north for a 1/4 mile or so to the end of the cliff. Just past the cliff, the use trail starts to spiderweb and becomes harder to follow. About this time, you will notice a large rock tower to your right. This is a semi-important landmark. Angle eastward and toward the north side of the tower on one of the faint use trails. (Note - If you take one of the faint use trails spiderwebbing away from the tower and more northerly, you will be heading toward Rainbow Wall, another fine feature of the Red Rock NCA backcountry.)
One complication along this part of the route is that a rock formation not far east of the point where the ramp meets the ridge may have you thinking it is the "tower."  It is not, and that is how you can head up the wrong ledges and cliff out.  DO stay to the left (north), following cairns and the use trail to a point just east of the "real" tower (seen from the east in the second picture below). 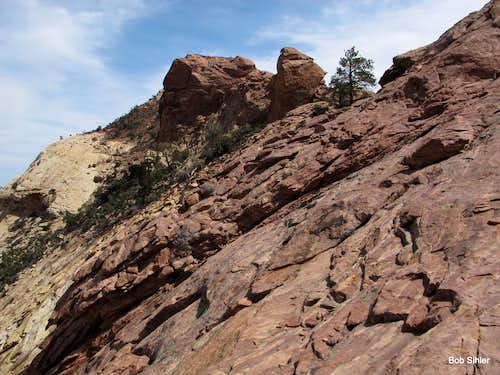 The pillar on the right is not the tower mentioned in the route description. Do not ascend the ledges to its left unless you like cliffing out. Instead, stay to the left and eventually regain the ridge past the formations seen here. 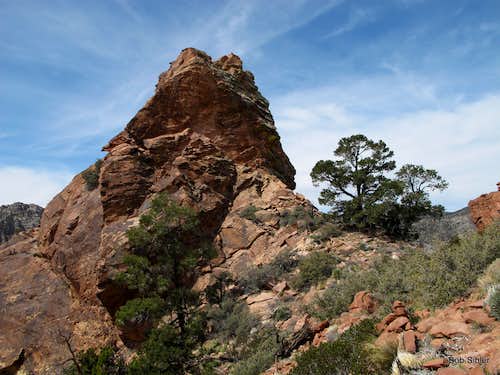 It's hard to get a decent shot of the tower during the approach from its west side, but here it is from the east.


As the use trail starts to spider web, look for one that heads more northerly and away from the rock tower. The use trail starts heading up a talus slope, which will ultimately lead you to the summit a short distance away. If the route is in question at this point, simply head up. 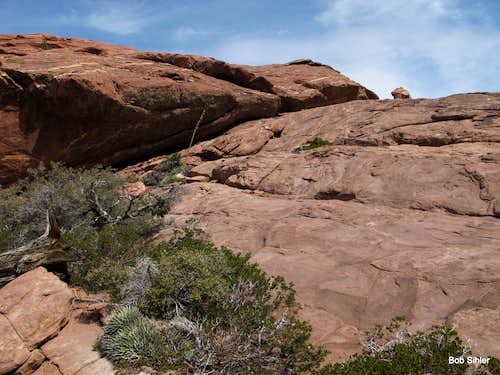 Not far beyond the pinnacle that is an important route landmark, these sandstone ramps appear. Follow them, including a short Class 4 downclimb, to the summit.

On the way, there is only one sorta difficult section, that being a short (12-15 feet) and easy (and unexposed) Class 4 wall that must be downclimbed. From the base of the wall, continue north and up to the summit.

To descend, retrace your steps.

RT numbers are around 13 miles, with about 3100 feet of gain.
Although I didn't GPS the route and although the obstacles in the canyon make it hard to estimate distance traveled, I felt the RT mileage was closer to 10 miles, maybe 11-12.


* This route can also be linked up with the last part of the standard non-technical route on Rainbow Mountain for a 45-minute traverse ending with a 2-for-1 special. Rainbow Mountain’s summit, by the way, is more technically challenging to gain, and more aesthetically pleasing, I think.

Although water is generally plentiful in the canyon, it's hard to come by on the upper reaches of the mountain. Intend to haul your own from the car.