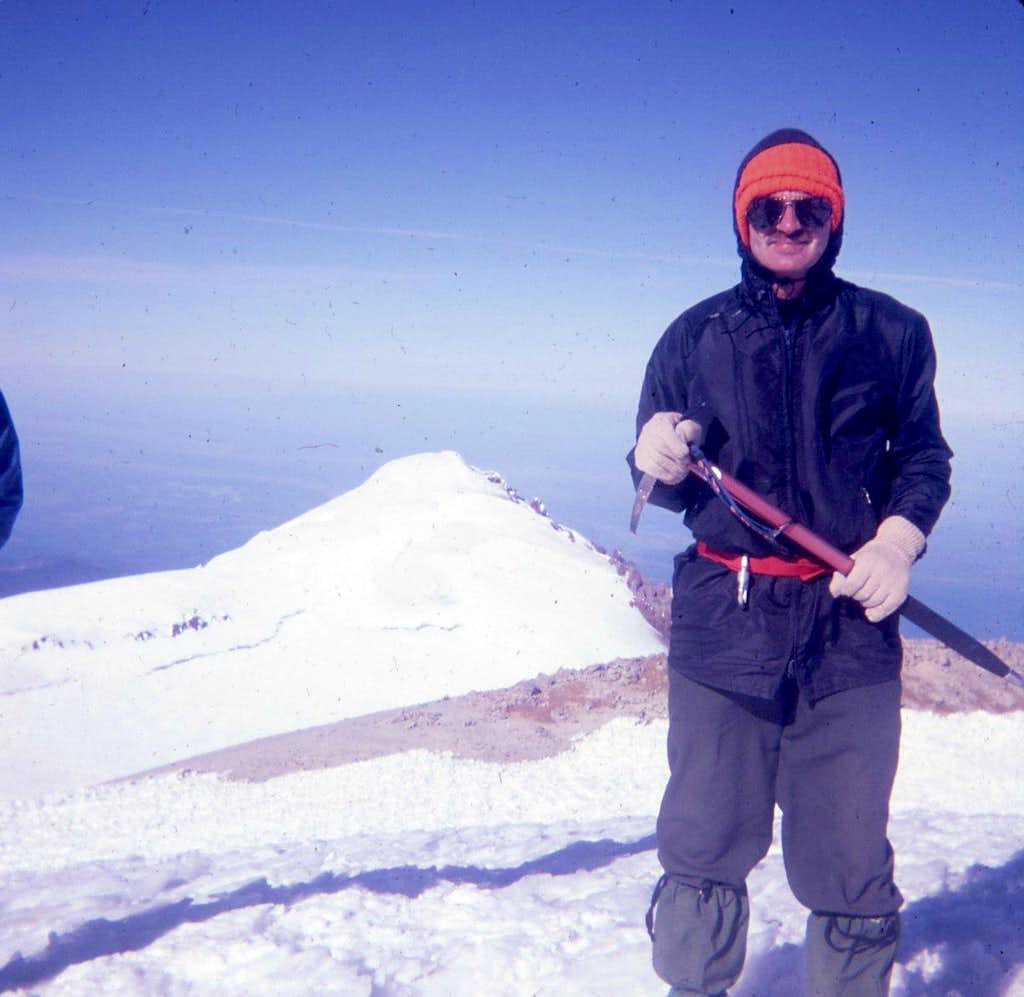 NO, this is not a scene out of "ZOOLANDER." This is ME, standing on the summit of Mt. Rainier in mid-August 1984. Hey, what's the SNICKERING about? GORTEX was TOO expensive back then!!! PHOTO taken by Randy Sackett -(SCAN from KODACHROME) Evidence that Rainier was once higher and of greater bulk is shown by steeply dipping lava flows in Sunset Amphitheater and South Tahoma Headwall that slant upward - probably toward a VENT that lay 500-1000 feet above the present summit. The shape of Mt. Rainier's summit area, with Liberty Cap and Point Success on the summit rim as REMNANTS on the side of a more higher and more symmetical cone, adds to the evidence of a former higher summit. Rainier is a striking example of the complex interplay of eruption and eroision typical of all Cascade Range volcanos. Mudflows caused by violent explosions 6600 to 5700 years ago vastly diminished Rainier's (former) bulk, changing its appearance and causing great devastation in flanking valleys. - Fred Beckey from CASCADE ALPINE GUIDE: Columbia River to Stevens Pass (Second Edition - 1986)
« PREV NEXT »

Love the outfit. Who could afford Gortex then. Was it even out? Every thing I had was heavy, very heavy. Nice wooden ice axe too. I had one of the first MSR thunderbird ice axes, the orange one. Bought it direct from Larry Penberthy at his home near Boeing field. Larry was the guy that started MSR.

WORKED at Boeing field. My grandmother, bless her heart ... LIVED to be 95 - she lived her ENTIRE LIFE in western Washington!!!

I'm guessing the peak behind you is Liberty Cap - am I right? Even in Washington which uses a prominence cutoff of 400 feet, Liberty Cap is considered a 14er, with 472 feet of prominence. Compare to Sunshine Peak, Colorado's lowest 14er, which has 501 feet of prominence according to Roach. And Colorado rather loosely uses a 300-foot prominence threshold for listing its 14ers. Anyway, if I ever climb Rainier again I want to have enough time for Liberty Cap while I'm up there!

Thanks for giving me some insight on the
"prominence" rating system. Yes, it's
Liberty Cap! It's all part of Mt. Rainier,
which at one time was 16,000 feet high.
I asked about Liberty Cap, and the guides
said it was too much of a risk in mid-August. Of
course, we know that the climbing routes
(on glaciers) change from year to year.
I don't know about Colorado, as I've never
been there. When I climb a mountain, I
"focus in" on what the mountain means to
me, and don't normally COMPARE it with other
peaks; especially ones I have never seen.
Liberty Cap is an awesome & sought-after
objective for most Rainier climbers. Just
look at the brave souls who attempt to
reach it via Liberty Ridge! Thanks, Bob!!! (Very insightful question, and
I'm sure my brief answer was not sufficient.)

Nice shot of you on Rainier.

Most of all I like your harness/swamie(sp?) belt. In the old times we used swamies. Harnesses with leg loops had not been invented yet. And before that we used the end of the rope to tie around the rib cage, not the waist. I am so glad you did not have an accident involving a crevasse. Even if the belayer catches the fall, that swamie was bound to knock the wind out of you.

Re: Nice shot of you on Rainier.

Thanks, Marc! Yes, it was way back in 1984.
Only the "well-to-do" could afford Gortex
parkas at that time. Cell phones were still
in the "infant" stage. Thanks for your kind
words; it was a real treat to climb Rainier.

The SP purist's (you know I'm not one:)) favorite colors!!! Now I just can't believe you could leave WA. Anyway, a great shot, my once blue friend turned passionate red!!!
Cheers
Jacek

Yes, but WHAT are you doing in front of your
computer, when the hills are alive with the
sound of ... MUSIC ???

Getting depressed and creating SP stuff :)

That's BETTER than getting stuff and
creating SP depression !! : )

As to depressions I think they might be necessary, on SP as well, since as my favorite (American) writer puts it:
"Only in silence the word, only in dark the light, only in dying life: bright the hawk's flight on the empty sky"

In AZ, the skies are filled with old buzzards
during the day, and very young bats at night.

But each of the buzzards cuts thru its own section of the empty sky :)

Just contemplating whether the glass is half
EMPTY or half FULL. Who really knows ??? ??

Everybody but you, Larry: it's always half-FULL on your side of the Atlantic, and always half-EMPTY in Poland.

If your glass is half empty, would you desire
some more of (whatever) you have in your glass?

My glass has been half-empty a few times, and
I had to fill it up with pleasant memories of
mountains and dreams.

I suppose the choice would be the FREEDOM to
make your own choice, right ???

A "foozler" is a 'bungle' or blunder in the "dog eat dog" world of high fashion.

Perhaps in the music world, it could be THIS.

Larry, please take this the right way, but...

...this photo makes me laugh out loud!

Re: Larry, please take this the right way, but...

"Laughter is the ONLY medicine (WE) can afford !!!