The Virunga Volcanoes form a chain of eight peaks in the Albertine Rift which dot the borders of Uganda, Rwanda and the Democratic Republic of the Congo. They are, from east to west:
The last two are very young (12,000 years) and highly active! They alone count for 40% of all African volcanic eruptions. In addition, the Nyiragongo crater contains the largest lava lake in the world. As recently as 2002, lava from Nyiragongo destroyed one-third of the city of Goma.

A helpful map of the range can be found here. 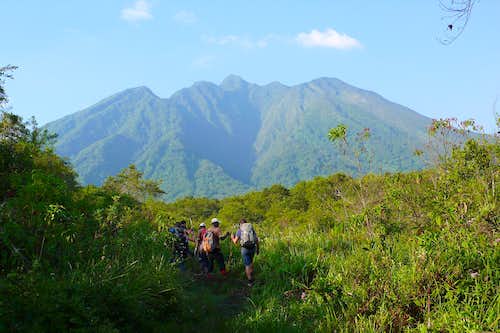 Sabinyo seen from the North
The three northerly volcanoes are best climbed from their Ugandan side. Point of departure would be Kisoro, the little town directly at the feet of Muhavura, Gahinga and Sabinyo. Lying as it does at 2050m, it has a pleasant climate and no malaria mosquitos. There are basically two ways to get there. So as to save me the Rwandan visum and the hassle at the border, I flew to Entebbe, Uganda. With hindsight, not the smartest of moves. As the roads in Uganda are absolutely hopeless, driving from Entebbe to Kisoro takes you a full day, and an uncomfortable one on top of that. So the smarter option would be to fly to Kigali, Rwanda. From there, Kisoro is reached via Musanze and Cyanika in less than four hours, border formalities included.

Visoke and Karisimbi are climbed from Visoke, Rwanda, though you would normally sleep in Ruhengeri, or as it is now officially called: Musanze. From Kigali to Musanze (1800m) would take you about two hours, and from there to Visoke (2500m) about half an hour.

Mikeno, Nyiragongo and Nyamulagira, although entirely within the Democratic Republic of the Congo, are also best reached from Kigali. Whether climbing in the eastern DRC is currently advisable is of course quite another matter...

The first solo ascent of Mikeno —the only truly technical climb and surely the most difficult of the eight— was made by W.J. Ganshof van der Meersch in 1932.

In 1946, in preparation of his attempt at Everest, Canadian Earl Denman climbed all eight volcanoes in less than a month. His account of this undertaking is well worth reading (see literature).

Many may still associate Uganda with Idi Amin and Rwanda with genocide. Both countries have however made remarkable recoveries, and are today absolutely safe to travel to! On top of that, Uganda is also exceedingly friendly.

Sadly, the eastern DRC has not fared so well. Despite a United Nations peacekeeping force, the political situation is still unstable and the region littered with IDP Camps (Internally Displaced Persons). Here is a good website to check. Currently (February 2013) it is very explicit: The FCO advise against all travel to eastern and north eastern DRC.

Uganda, Rwanda and the Democratic Republic of the Congo all require visa. I bought the Ugandan one at Entebbe Airport for USD 50. Officially, they also require a yellow fever vaccination, but in practice, this is not checked. Still, it makes sense to have it. 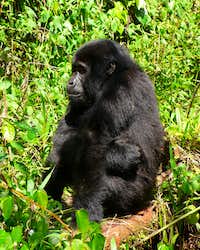 Guides are obligatory on all eight volcanoes and hefty fines await anyone climbing without one. In addition, an armed ranger will accompany you. When I climbed Sabinyo, we heard buffalo nearby, so I suppose the ranger is there for a reason...

In Uganda, foreigners pay USD 95 (USD 35 park entrance fee and USD 60 for the climb/guide) per day, in Rwanda USD 75, or USD 175 for the two day climb of Karisimbi. In the DRC, a 7 day permit sets you back USD 100, and a guide USD 15 per day. When climbing Karisimbi, bring some extra cash should you wish to visit the grave of Dian Fossey. 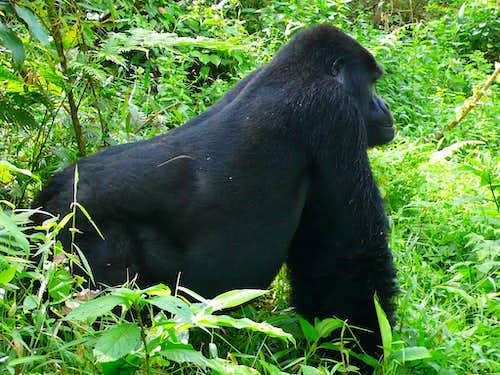 A male mountain gorilla of the Nkuringo group

The real costs arise when you want to add a gorilla tracking. In Uganda, this unforgettable experience will cost you USD 500, in Rwanda USD 750, and in the DRC USD 400. Money well spent, not only because you are likely to cherish the memories for the rest of your life, but also because almost all of it is used for the protection of these beautiful animals.

Note that mountain gorillas (Gorilla beringei beringei) can only be seen here, or in the nearby Bwindi Impenetrable Forest (Uganda). There are no mountain gorillas in zoos, only (mostly western) lowland gorillas.

Five of the eight Virunga Volcanoes
Except for Karisimbi and Mikeno, all volcanoes can be climbed as day hikes. On Karisimbi, the hut is there for the guides, rangers and porters only, so be sure to bring a tent and, as the camping spot is at 3660m (12,007ft), a decent sleeping bag. On Mikeno, the Kabara hut at 3250m (10,663ft) is probably no longer usable, so a tent is needed here as well. (Probably, because the mountain has not been climbed since it became a retreat for militias and poachers.)

Normally, you would also want to camp when climbing Nyiragongo, so as to marvel at the giant lava lake at night, surely a sight to behold. But like I said, the eastern DRC is currently perhaps not the best place to be.

There are, despite all the rain, no reliable sources of drinking water, so it must all be carried up. 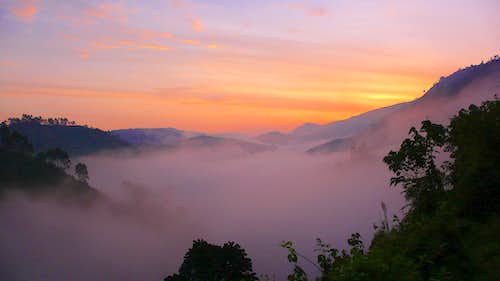 Dawn in the Virunga foothills
The best months of the year are January (short dry period) and July and August (long dry period). With some luck, June and September are fine as well. Even in the dry period, short afternoon showers are frequent, so be sure to start early and bring rain gear. The temperatures at the base are ideal all year round, thanks to the altitude. In Goma (1500m), Musanze (1800m) and Kisoro (2050m), they range between 20°C and 28°C during the day, and 10°C and 15°C at night.

The best book on Africa's mountains I know of is: Hermann Kiendler, Afrika: die höchsten Berge des Schwarzen Kontinents, Panico Alpinverlag, Köngen 2011, 408pp. The Virunga Volcanoes are on pages 270 to 301. Unfortunately only in German.

Earl Denman, Alone to Everest, Coward-McCann, New York 1954, 255pp. Describes how he climbed, in his entirely individual style, all eight volcanoes in preparation of his attempt at Everest.