Standing 3,976 meters (13,040 ft) tall, Acatenango, along with its twin volcano to the south, Volcan Fuego, overlooks the historic former capital city of Antigua, Guatemala. Acatenango has two principal summits: Yepocapa, the northern summit at 3830 meters (12,565)and the southern and highest cone, Pico Mayor at 3976 meters (13,054 feet). The first well-documented eruptions of Acatenango took place from 1924 to 1927, although earlier historical eruptions may have occurred. Francisco Vasquez, writing in 1690, noted that in 1661 a volcano which lay aside of Fuego "opened a smoking mouth and still gives off smoke from another three, but without noise."

Acatenango's last eruption was in 1972 and the volcano has been dormant since then. During the hike to the top, you'll pass through entirely different ecosystems — first farmland, then cloud forest, then high alpine forest, and finally through the volcanic zone to the very summit.

Acatenango is located between the departments of Sacatepequez and 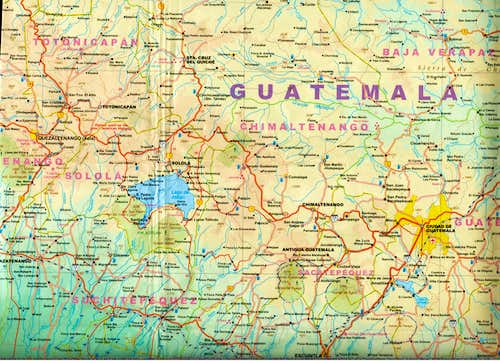 Road map - Antigua is in the lower center section of map.

Chimaltenango, in the central region of Guatemala. Most guided tours leave from Antigua. From any of the bus stations in Guatemala City, take a bus to Antigua. For a list of bus companies, visit my page Getting Around in Guatemala. From Antigua locate any of the numerous travel agencies for a guided trip.

If you are not using a guiding comapany, you can get to Acatenango from two different directions:

From Antigua, Guatemala drive to Ciudad Vieja (5 Km) and then continue on to Alotenango (2 Km). The trail is steep and rocky, starting at about 1400 m near Alotenango and ascending to Acatenango's summit (3763) in about 9 km traversing along the Quebrada San Jose, along a trail that does appear on the topo map. It takes 8-10 hours of hard work.

Another option is to drive to Ciudad Vieja from Antigua and then, along a dirt road to Soledad (2400m) on the northern flank of Acatenango (Route 10 from Ciudad Vieja to Yepocapa). This route ascends Acatenango (3976 m) first, then descends to the col between (3280 m) the two volcanoes where you can then climb Fuego. Most people spend the night on Acatenango, using the first day (4-6 hours) to climb it. Then they get up early for the climb to Fuego. 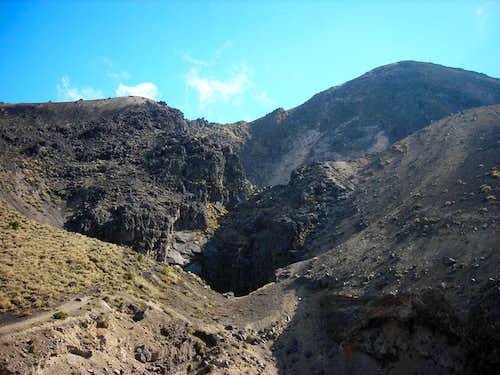 To climb, head out of La Soledad, filling up on water before leaving Acatenango as no other sources exist. The trail branches off a couple times at the beginning as it passes through milpa. Paying a guide is a reliable option, locals charge Q100 to lead you to the summit. If money is tight, ask for someone to show you the way the first shelter or descanso, as after that point the trail is obvious and never has any other major branches. The trail leading out of Soledad is marked with small white signs that say Volcán, is privately maintained, and contains several small rest stops and huts on the way to the summit. From the summit great views exist of the valley and of several other volcanoes, including the country’s best view of the active Fuego Volcano. Descend via the same route to La Soledad. Alternatively, make your way towards the saddle (Mestiza) between Acatenango and Fuego to head down on the longer but obvious descent towards the town of Alotenango. The hike can be done in one long day from La Soledad, alternatively decent camping options exist in the windy summit cone. If you plan on camping, plan on the ascent taking more time as you will be carrying a heavy pack. No water sources exist on the volcano.

From the trailhead, follow the trail to the south. Make two left turns through the cornfields. Continue along the well-used trails towards the volcano. There are several to choose from, and they all converge when the forest is reached at 2750 meters (9000 feet). From there, there is one easy-to-find trail to the summit of Acatenango. You will pass several good campsites at 3125 and 3300 meters. 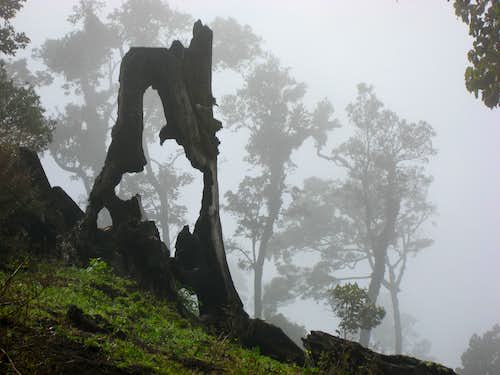 Some of the climbing information is from Mike Kelsey who wrote the highly recommended Climbers and Hikers Guide to the Worlds Mountains. Mike climbed this peak in February 1994. I climbed both peaks in 2007 and 2008.

Thanks to BLong for additional detail on the route description.

Now (as of September 2015) there is an access fee charged at the trail head just outside of la Soledad. It is 50Q if I remember correctly. Further up the route it needs to be presented and a short survey/registration is filled out with the purpose of the climb and demographic data

Apparently since they started collecting entrance fees, robberies are no longer common along the La Soledad route. There are at least 3 different ways to reach the summit via the La Soledad trail: 1. Up the trail from the fee station a ways is a sign for "Al Conejo" and a trail to the left. It seems this is the route most commonly taken by guided groups, and it leads to camps on the east side of the summit, which can be accessed via a trail from those camps. 2. Staying to the right at the "Al Conejo" junction leads to another junction called "The Y" with a few campsites. The trail to the left goes to the saddle between the two summits of Acatenango, where one could follow the ridge to either. This ridge is notoriously windy and cold (a local guiding agency calls it "the refrigerator"). 3. Staying to the right at "The Y" leads to an area with many well-developed campsites on the west side of the summit, with great views of Fuego. A good trail up through these camps leads directly to the summit. We took a taxi from Antigua to the trailhead at La Soledad. The price probably was not very competitive (400Q one way) but the service was reliable and safe. Ask for Julio Villar at the central plaza in Antigua (or your hotel attendant may look him up).

There is an easy way to get there from Antigua for 10Q. First from the terminal (or from the crossroads towards Jocotenango) get on a bus to Parramos. That's 3Q. Get out at the park and ask for busses to Yepocapa. Both chicken busses (7Q) and minibusses (10Q). Get out right at La Soledad. It's quite regular service. It will take about an hour - one and half hours to do this trip from Antigua to La Soledad. Do notice that the camp sites facing Fuego are now privatized. If you want to camp there, don't go on a weekend, arrive a bit late and take a spot where there are no tents. We could find a spot where a guy called Antonio told that it actually belongs to his agency, but as no one is there right now, we can camp there. He even brought us fire wood with diesel for free. It's not allowed to camp on the crater and I wouldn't recommend it either for the extreme cold and wind - 6 young climbers lost their lives there in 2017 which is why they have increased security significantly, making sure everyone traveling without a guide has the right equipment and experience.