When you going to beautiful Grbaja Valley from Gusinje town, coming from Dolja Valley you can see the group of beautiful peaks which are located on both sides of Grbaja Valley. For sure, first peak on right side will also attrack your attention. That's Volusnica peak.

Volusnica (1879 m)(read "Volushnica") peak don't belong to group of highest peaks of Montenegrin part of PROKLETIJE, but it's about 600 m high southern wall is still very amazing, dominating above beautiful Grbaja Valley (1160 m). Volusnica peak is also very known as maybe one of the best viewpoint peak in this area, with Popadija (2057 m) for sure the best and most impressive viewpoint to amazing Karanfili (2460 m, 2490 m, 2441 m) peaks. Also, from Volusnica you can see Ocnjak (2185 m) peak, 700 m deep Grbaja Valley and many others high and sharp peaks of Prokletije massif which staying in border zone with Albania.

Volusnica peak is for sure an extraordinary mountaineering adventure, pure paradise for those who like impressive and mountain scenery, specially for mountain photographers. Early in the morning or in afternoon (because of moving sun) is optimal timing to take a shot of amazing Karanfili peaks from Volusnica summit.

Even not the highest, Volusnica offers highest enjoyment & very impressive impressions! So, if you are visiting Montenegrin part of Prokletije and if you want to have excellent photo of Karanfili peaks, don't miss Volusnica! 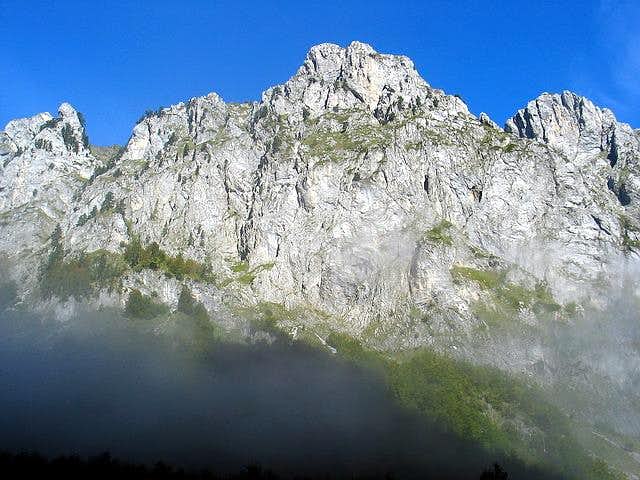 Southern border of Volusnica Valley is it's ridge, from where the slope of the valey descends easily to the valley and "katuni" (shepherd's huts). On north side of the valley is ridge which Volusnica (1879 m) separate from Popadija (2057 m). Only approachable connection between those two peaks is Cafa Pass (1870 m)(read "Chafa"). Volusnica Valley is mostly grassy and very reach with water springs which are placed everywhere. This valley is easily accessible, so that's one more reason while mountaineers very like and often visit it. 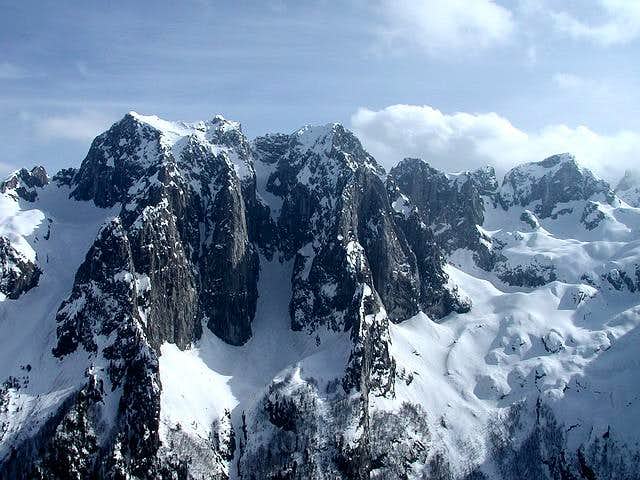 ACCESS: 12 km on the road from Plav to Gusinje, and than 7 km more to Grbaja Valley. This mountain valley is a former glacial riverbed, surrounded by the peaks of Vezirova Brada, Podgoja, Karanfili, Volusnica and Karaula.

ROUTE DESCRIPTION: The marked trail starts at the "Dom Grbaja" (1160 m, Grbaja Hut), near the military watchtower and then through a beech wood to the plateau and Volusnica Katun (1680 m)(shepherd hut). It is a glacial cirque and the katun is rich with water. The Volusnica Brook is formed from melting snow and a waterfall, and flows to Grbaja Valley. From Volusnica katun follow the markers to the highest peak of Volusnica, then southward, along the grassy and rocky slope, to the upper part of the Volusnica cirque, and than to the summit of Volusnica (1879 m) peak. The eastern rocky face of Volusnica descends steeply to one of the four meadows of Grbaja Valley and is a considerable climbing challenge for mountaineers. 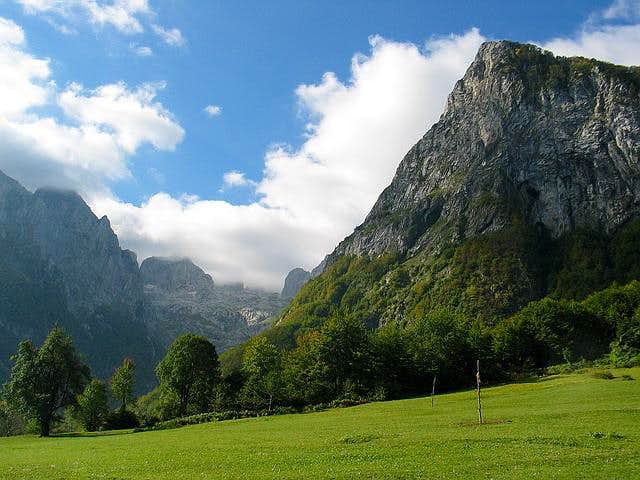 Sticking to the upper crest, from the summit of Volusnica, go west where difficulties ease, to the peak of Popadija (2057 m), (also named "Talijanka"). This peak is part of the border line with Albania.

Acces to Volusnica & Popadija should be made along the layered rock (1790 m), which is a carved "strip" from the Neolith Age of 600 years B.C. There is a primitive drawing of a wolf attacking a child.

This tour is tipical hiking tour and is used as preparation for other, more difficult tours in this part of the Prokletije mountain range. 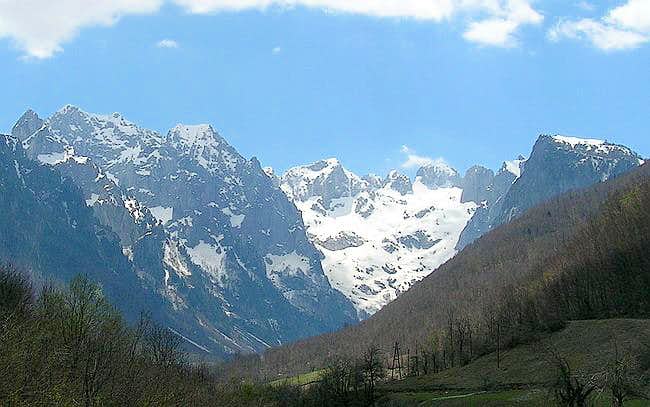 Gateway to Prokletije and Volusnica (1879 m) peak are Plav town and Gusinje town and Grbaja Valley. Information how to get there:

Information about flights & tickets find on the sites of JAT Airways, a former Yugoslav airlines, or on Montenegro Airlines.

By train
~Beograd (Belgrade)-Bijelo Polje. Than with bus or with car (rent a car) to Plav and Gusinje.

Gusinje town and Plav town (in Montenegro) are the main destinations you would head first. In Gusinje you can buy everything (food, shampoo, soap, clothes,... and many other things), all what you need for few days of trekking and climbing in heart of Prokletije massif. 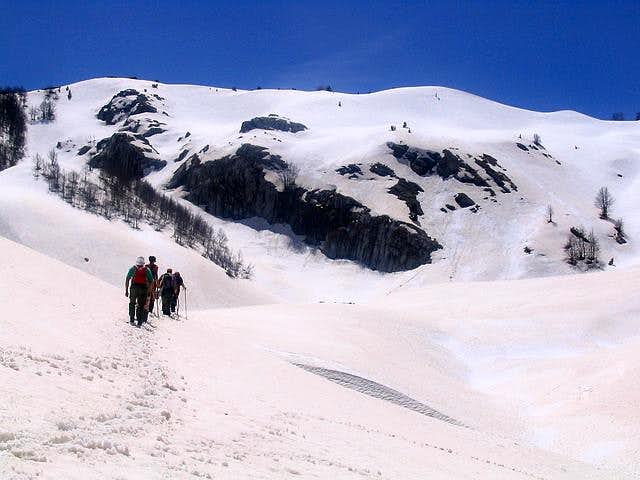 If you're interested in backpacking/hiking/mountaineering/climbing, June - September are the best month to do so. In June and July also, you will find snow area on some places, specialy on north side of massif. Don't worry, snow is hard. If you will come earlier, take with you everything from mountain equipment (crampons, ice axe,...), which you will need for example in winter or spring time.

Optimal place for stay and camping in the Montenegrin part of Prokletije range are "Branko Kotlajic" Hut and "Karanfili" Hut, both placed in Grbaja Valley. The owner of "Branko Kotlajic" Hut is "Radnicki" Mountain Club from Belgrade/Serbia). Exist possibility for getting a key of that hut and stay there. Information: e-mail: info@pd-radnicki.rs, www.pd-radnicki.rs . The owner of "Karanfili" Hut is "Karanfili" Mountain Club from Gusinje town.

Exist chance to make a deal with shepherds who offer a place in their huts. Try it and let yourself be surprised. Most of the wayside restaurants can offer accomodations over night, you just have to ask "prenociste". Camping is not allowed but not controlled regularly.

Also, you can rent rooms in Plav and Gusinje towns and stay there. For orientation - from Gusinje till Grbaja valley is 7 km distance. By car - 10 minutes on asphalt road, by walk with big rucksack - 2 hours. 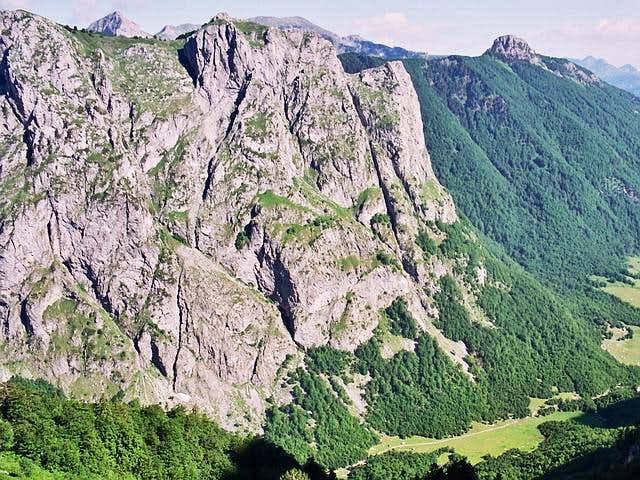 No fees or extra fees for entering the Prokletije.
No permits needed either.
Usual rules of behaviour for NP's do apply.