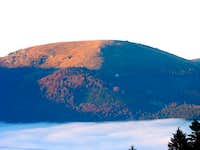 The Vosges are a mountain range stretching in the north-east of France, whose main ridge makes the border between the regions of the Lorraine and the Alsace.
Their highest top is the Grand Ballon (formerly called also Ballon de Guebwiller), 1424m. The "ballons" (baloons) designate their highest tops, whose shape are often round-shaped, which explains the origin of this word.
The Vosges divide themselves in two halfs.
The southern part belongs to the regional "Parc naturel des Ballons des Vosges", while the northern part owns the regional "Parc naturel des Vosges du Nord." 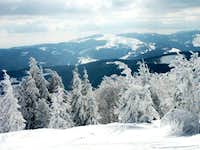 Many theories expain the etymology of the word "Vosges".
Celtic word "Vosego" used to mention hills between the Celtic Gaule and Belgium. "Vosegus" is also a pagan divinity in the antiquity. This spirit was the soul of the obscure forests.
In the IVth century also appears the term "Silva Vosego", scene of many wars. Later on, in the VIIth century, the celto-germanic word "wasgauen" is sometimes mentioned. In the XIIIth century, the official latin word was "Vosagum", which evoluated into Vogia or Vosgia. French word evoluated later into "Vouge", and then "Vôge" (in singular, Vosges being the plural) during the Renaissance.
Nowadays, in the Alsacian dialect, it is also called D'Vogese. 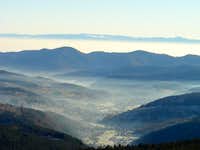 The french department of the Vosges was based on the meridional Lorraine in 1790.
Paris's "Place des Vosges" takes its name from the department, who was first to pay the taxes to the revolutionary army in 1799. 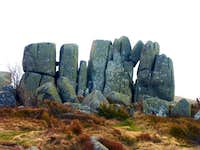 The range of the Vosges has a dissymetric profile, opposing the cristalline south to the sandstone north. While the West slopes fade out gently, the East ones suddenly fall into the valley of the Rhine.
The southern Vosges are made of a main curved range, to which append several secondary ranges, separating the Mosel and the Ill rivers. 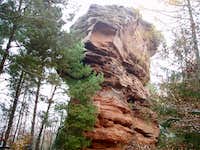 Geologically speaking, the Vosges and Germany's Black Forest belong to the same unit. But indeed, they are not really mountains, as formed the Alps or the Massif Central. This is just an elevation of the ground, in which the Rhine river made its way. The altitudes between the southern Vosges and the high Black Forest are almost the sames : 1424 m for the french Grand Ballon and 1493 m for the german Feldberg. This case is the same, for the northern Vosges and the northern Black Forest : 1099 m for the french Champ-du-Feu and 1163 m for the german Hornisgrinde ... The plain with the Rhine, is having several big cities, from north to south : Karlsruhe (KA), Rastatt (RA), Baden-Baden (BAD), Haguenau, Strasbourg, Offenbourg (OG), Lahr, Colmar, Freiburg (FR), Mulhouse, Lörrach (LÖ) and Basel (Bâle, in the Switzerland). 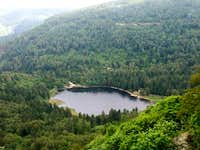 The last glaciations left some glaciar valleys with characteristic "U" shapes, mostly in the southern vosges. In few of them lie some glaciar lakes, resulting from the accumulation of moraines: Gérardmer, Retournemer, Longemer, and sometiles peat bogs.
The main peat bogs in the highest part of the Vosges (the southern one, between Colmar and Mulhouse), are : Machais, Lispach, Bravouse, Rossely, Frankenthal (Hohneck), Missheimle (Wurzelstein) and Pourri Faing (Ventron).
The main glaciar lakes are the next ones : Forlet, Lac Blanc and Lac Noir, Lac Vert, Schiessrothried and Fischboedle, Altenweiher, Lac du Ballon, Neuweiher and Lac des Perches (Sternsee), Sewen and Alfeld.
The Vosges are located over an active geologic faul in Europe. On february 22th 2003, an earthquake of magnitude 5,4, whoce core was located near Housseras, was felt by inhabitants in a very wide area. In the XVIIth century were witnessed some rock falls in the Plaine valley.
The Vosges are a very popular destination in France, for practicing hikes in summer and ski in winter. The altitude isn't very high (only 1424 meters at the Grand Ballon), but the weather conditions are very hard. Summer is very hot and stormy, winter is very cold and snowy ! In the southern part of the Vosges, you'll have the possibility to see the Bernese Alps, from several popular nuded summits (the best Alps-panorama in all the Vosges is certainly, the very famous " Ballon d'Alsace " ... ). Except the summits, you can find a lot of : climbing rocks, lakes, peat-bogs, waterfalls, etc. So, it's very interesting to discover !

Some other tops are lower, but very popular and remarkable, for doing hikes and discovering very big panoramas: