There are more beautiful routes on Vrtača/Wertatscha, but now, when the chair lift on Zelenica is not operating any more, this is the shortest ascent on the second highest summit of Karavanke/Karawanken. The first part is not marked, going by a forrested valley. Nothing much amusing in it, the approach in V Kožnah basin is more valuable in times of tour skiing. The upper part is very nice, going by marked paths which are the same as if coming from Zelenica alpine meadow. 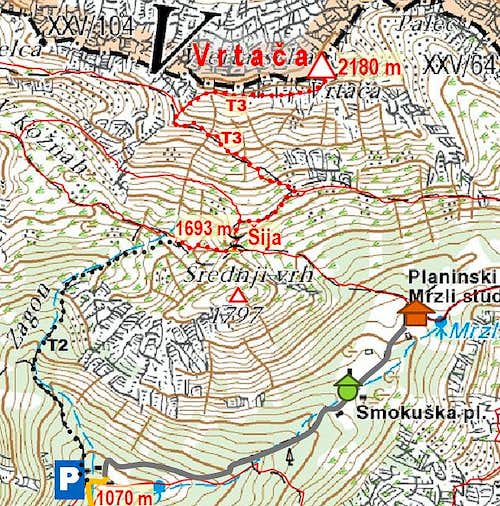 Difficulty: It's a hiking tour, on the Swiss Hiking Scale its difficulty would be graded T3. On the summit ridge the path is narrow and requires some safe step. If the route is done as a ski tour, it is a quite difficult one. The summit slopes are some 35 degrees steep, difficulty of skiing would be PD+.

Orientation: The lower part is not marked. In the beginning the path is good, in the middle of Zagon valley some additional care is needed. If you keep right (towards the east), you can not miss much, because dense vegetation and steep slopes of Srednji vrh are preventing you to go wrong.

Exposition: In the upper part, where the slopes are steep, they are south oriented. A few passages on the ridge are still exposed and require a safe step.

Objective dangers: Nothing special. A very poor visibility in the lower part could cause some issues.

Best season: The tour can be done as a summer hike up (actually dry conditions are in average from June till October), or as a ski tour (best conditions can be from February till May). For skiing Zagon valley is not the most beautiful one, so the majority of tour skiers plan the downhill towards Zelenica (eastwards).

Gear: In summer conditions good shoes and poles are sufficient. On a ski tour, in addition to normal ski touring equipment an ice axe is needed and if snow is hard also crampons. By this normal route we don't ski from the very summit, so we need this equipment for the summit rocks.

Tour start: Tinčkova koča, 1070 m. This is the hut at the end of the normal road in Završnica valley. The road further up towards Zelenica is not prohibited (there are no signs), but has a ramp or two and is very deteriorated, perhaps it can be done only by 4WD.

Time for ascent: 3 h 15 min. In winter conditions it will be more.

From the parking place we go left, towards the west (while the road towards Zelenica is continuing by the hut and up). On the first 20 m (across dry creek bed) we go by the marked path, which goes towards Stol/Hochstuhl region. But as soon as the marked path crosses the creek bed and turns left, we deter right and continue by the non-marked path up the valley - in the northern direction. The valley is broad and forrested, but the path is good and comfortable. Some 30 min we go up by the western side of the creek bed, then the path branches. We should continue right - across the dry creek bed. But even if you go by the path straight forwards, you can later (when it disappears) go right and cross the creek bed. In any case don't go left. So, the continuation goes by the eastern side of a distinct ravine. The path is still good and comfortable, slowly it turns towards the north-east. When the woods are becoming more and more light and pine bushes start to prevail, be careful again to follow the path. Don't get stuck in dense dwarf pines above the ravine. If choosing the path well, you soon continue by grassy terain, there are more and more meadows and you reach the place where once there was an alpine pasture. There you can find a water source (unless it's a very dry season), on the other side of the valley (northwards) you also see the marked path, which is crossing the slopes. That is the path, which goes from Šija saddle towards Stol/Hochstuhl. There you best go by the bottom of the valley, which descends from Šija saddle. The path soon becomes marked (marks are joining from the left). Some 2 h till here.

Gaining the SW ridge
Now we are gaining altitude quickly. In many turns we go up and across the slopes. On some 1950 m the path goes horizontally across the slopes, crossing an unpleasant ravine (some care needed). Beyond, the path ascends again and soon we gain the south-western side ridge of Vrtača, cca 1960 m. We find ouselves on a notch, where from the north another marked path joins (coming up by a scree basin, south of the main ridge). There we turn sharp right. 45 min from Šija till here.

Crossing below the main ridge
The first minutes of the ascent from the notch is quite steep and rocky. There some care is needed, when scrambling up. Later the path is better again, it goes by nice passages and grassy ledges, but the southern slopes are getting steeper and steeper. We soon gain the main ridge of Vrtača, but the path can't all the time follow it. It again detours some rocks on the southern side, then an almost flat section follows and we approach the main summit very closely. Yet the path avoids its rocks again by the southern side, so we gain the big metal ice pick (standing there instead of a cross) from the south-east. Some 30 min from the notch.

Till the crossroads above Šija saddle, we descend by the same route. From there it is recommendable to descend by the eastern side of Srednji vrh. So, we continue by "Zgornja pot" ("The Upper Path") towards the east. Yet, we don't need to go to Zelenica meadow. On a soft scree field directly south of Vrtača summit, we can simply slide down by screes. The path is not marked, but the upper part is fast and also the lower part brings us comfortably just to Koča pri izviru Završnice (the hut at Završnica source). From there you continue down to Tinčkova koča by the road.

In very good conditions you can ski from the main ridge, east of the summit of Vrtača, towards Šija saddle. Above the saddle it is again recommended to keep left and ski across the southern slopes of Vrtača towards Zelenica meadow. If you must go down to Završnica valley, there turn right and ski comfortably down.

Here is this description in Slovenian language.