Wadi Rum is a grandiose and divine desert with the live echo, one of nature miracles, paradise for fans of travel! It is possible to behold hours a panorama of its protogenic nature with rocky sandstone mountains and boundless space. Half-kilometer walls as mushrooms growing from sand are painted in all shades of the red. Numerous tops with difficult systems of cracks and canyons offer hundreds routes - from simple foot to technically difficult ascensions. 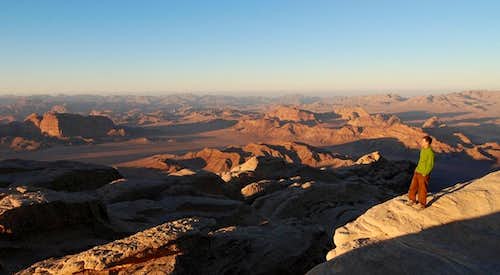 The Wadi Rum desert which as name the Lunar Valley is in the south of Jordan near to Aqaba(the big port and the tourist centre on Red Sea). It is the largest valley of Jordan. The name of Rum most likely occurs from an Aramaic root to value «high, towering». Wadi Rum has been occupied by representatives of various human cultures since the most ancient times, switching on Nabataea which left the traces in a valley a kind of temples, rock paintings. Presently in territory at Rum village lives Bedouins of the Nabataea Tribe. They are very kind and truly friendly people.

In the west Wadi Rum is known in connection with a name T.E.Lawrence who has developed his both famous and successful military operations in a valley during the Arabian revolt in 1917-18 against Turkey in the First World War. Here there was a general staff of Prince Fejsala ibn Hussein and T.E.Lawrence and their feats inseparably linked with history of this surprising district. Lawrence called Wadi Rum the Valley of God!

Concerning the Alps or Utah it is new area. Its trailblazers were Englishmen led by Toni Howard who have made many first ascents and their descriptions which are updated to this day in his guidebook "Treks & Climbs of Wadi Rum, Jordan". Englishmen have set the fashion, therefore basic quantity of routes in Wadi Rum is traditional. There are very little multipitches which have well equipped bolt paths for sports rock climbing. Today Valley of God totals about 350 routes up to 20 pitches which offer very enjoyable sustained climbing in beautiful desert scenery - red dunes, sandstones, variety rock formations and in aura which cannot be described with simple words… 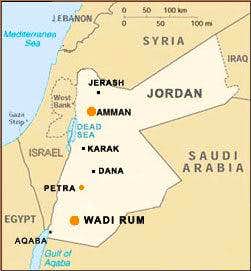 The closest international airports in Jordan are in Aqaba (King Hussain) and Amman (Queen Alia). From there the best way to reach Rum village is by taxi. From Aqaba it will take about 40-50 minutes and 30JD~40$, from Amman 3-4 hours and 80-100JD~120$ (same price for 1-4 person!). In addition from either Aman or Aqaba, bus service is on a regular twice daily schedule that stops at the Rum Rest House which is located just below the tower of Jebel Rum. The Rest House is where all International Climbers come to stay. Daily meals, food, restrooms, showers and camping are the best here. You can rent a car from either Aqaba or Aman, but it is not recommended. Also you can come trough Israel airports (Tel-Aviv, Eilat) and to pass Eilat-Aqaba border.