Wandering through the cliff bands on Ruby Peak

I've been working away at the Oregon Top 100 list for about 10 years now, each year usually picking off somewhere in the neighborhood of 4 to 8 peaks. I've really enjoyed the Top 100 list, I've made some great friends and seen most of the state. Oregon has long been my favorite place to hike and climb, and the Eagle Cap Wilderness has become my favorite region in the state. The great thing for me is that the Wallowa Mountains host over 30 Top 100 peaks, and are only a short 3 hour drive from my house just across the border in Washington state. Finding time away from work these last 5 years has been fairly difficult, so as is usually the case I had to shoehorn a climb into a single day trip away from the house. Leaving Kennewick early on a Saturday morning my buddy and I arrived in Enterprise around 7am to nearly clear skies with a few clouds wafting through. We made haste up the mountain in my little Suzuki 4x4 following the directions found here on summitpost, I managed to drive right past the trailhead, up through the quarry, and on up the mountain until I reached a point around 6400 feet in elevation where the road became completely overgrown. Completely lost we pulled the car off the road and packed up for our dayhike. Note to anyone else climbing Ruby Peak, if you've reached the quarry you've gone too far! 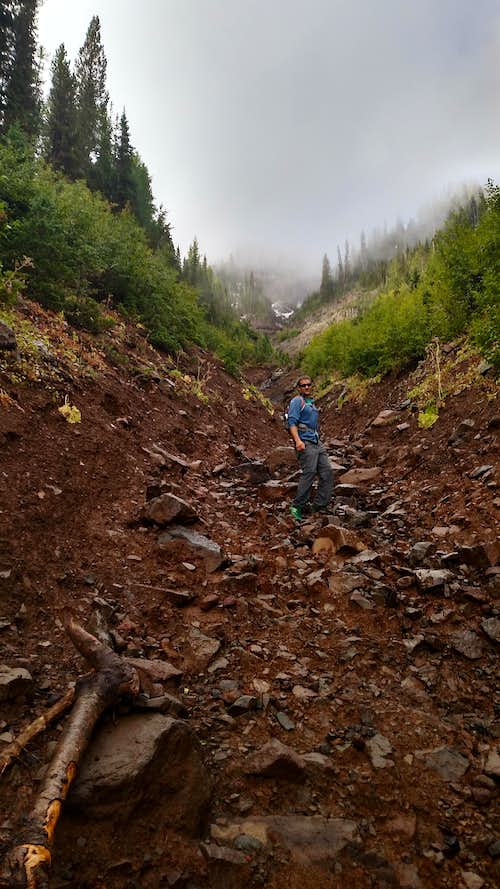 The overgrown road lay directly below the summit and seemed like it would be a good place to set off rather than backtrack down the road in search of the trailhead. We bushwhacked a short distance west and found ourselves in the steep muddy gully running off the north face of Ruby Peak that becomes Murray Creek. Clouds had settled in over the summit and were dropping down the mountain fast enough we really couldn't make out any sort of route. At this point we made the decision to climb the Murray Creek gully as far up the face of Ruby Peak as possible. Around 7200 feet it became very steep, and just too muddy so we exited onto a series of steep ramps to the right of the gully. 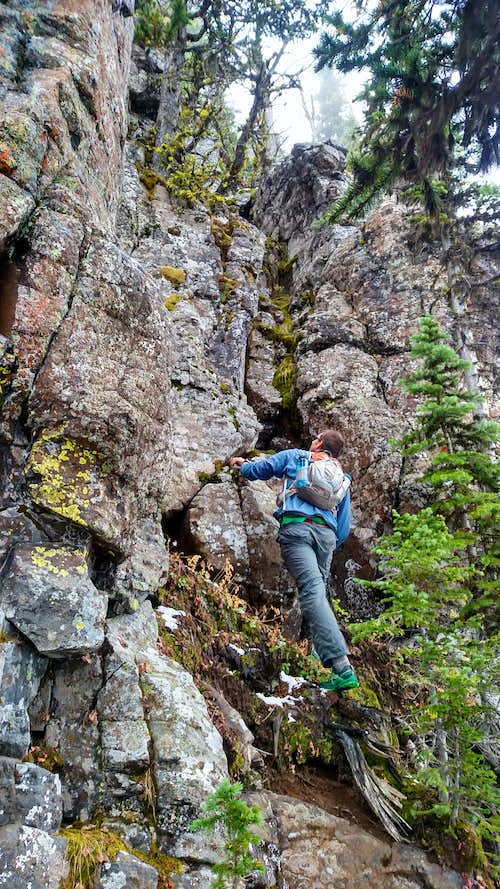 Routefinding through the cliff bands

At 7200 feet we found ourselves firmly within the clouds that continued to settle further down the mountain, visibility was around 100-200 feet revealing short sections of mountain ahead of us. Working our way west which looked less cliffy, we would walk out a ledge, become cliffed out, then make a seemingly difficult climb up a 10-30 foot cliff face to the next ledge. Sometimes we would zigzag east and west finding breaches in the cliff bands that weren't too bad to scramble up. The underbrush was wet, and snow hid along some of the ledges. This route finding was very tedious, and felt a little more risky than what I am used to finding in the Wallowas. After about the 5th ledge climb (which was a 20 foot crack climb) we finally found ourselves above 8000 feet where the clouds were blowing off and we could see we had made it to the summit ridge. 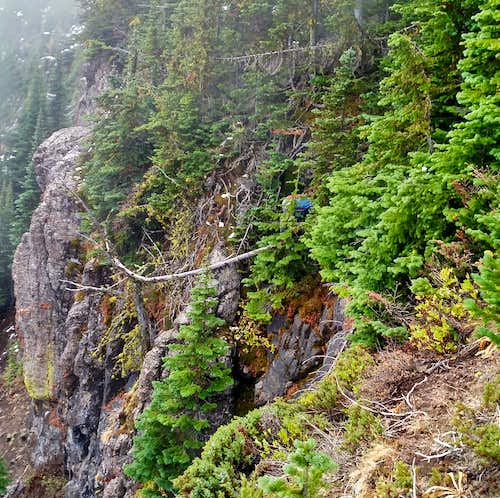 Using a tree to belay up a cliff

From that point it was an easy walk on up to the summit and some amazing views south to Traverse Ridge as clouds continued to blow through. We followed the climbers path back over the ridge, then followed GPS back through the brush and to the car. A pretty nice little September climb in the Wallowas! 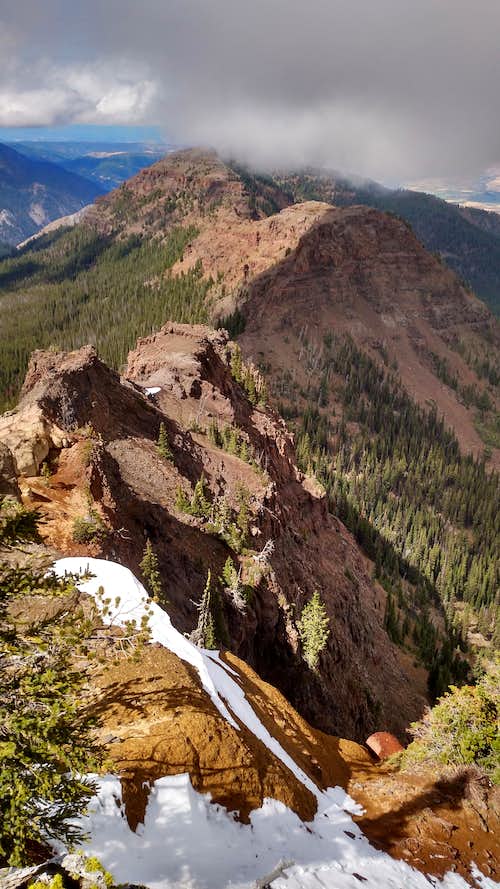 Looking down the west ridge 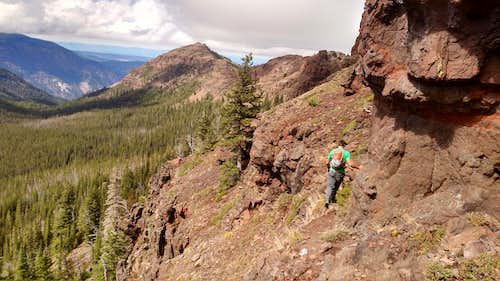 Scramble path back down the mountain

I understand the difficulty in finding this trailhead. I basically just got lucky last October as I randomly stopped at one of a few places that could have been the TH and got lucky. (After driving up and down the "road" and back and forth a few times.) Nice shots!

Thanks Brian. You got any big Wallowa trips planned this year? We had a trip all planned to do Cusick last year and got smoked out. Might make another run at it this year.

I am hoping to get there a few times this year. Cusick is on the list. I'd like to do some more exploring on the far west side too (Sturgil, Minam, Hazel area). And if I can get in to do Glacier Peak, I need to nab that one too. (I did Glacier Mountain this past fall too but I'm trying to recover the photos from a faulty memory card to put a page up.) But I think the ones I want most are Twin Peaks and Sawtooth. Was going to try to solo those when I did Ruby but there was fresh snow up there and I figured that would be pushing it. If you ever want a partner out there, let me know. Love that area of Oregon.