Wandering Through the Forgotten. Upper San river valley in November.

The album presents views of one, sunny, idyllic November day, long hike along San river from Rajskie to Zatwarnica village and back, crossing the area of nonexistent( for 67 years now) Boyko villages of Tworylne, Krywe and Hulskie.
Mountains and the whole area became deserted in 1947 as a result of so called "Operation Vistula" (Polish: Akcja "Wisla") - forced resettlements of post-war Poland's Ukrainian minority (including Boyko and Lemko people) to the Recovered Territories (Polish: "Ziemie Odzyskane"), carried out by the Soviet controlled Polish Communist authorities in order to remove the support base for the Ukrainian Insurgent Army (Polish: "UPA") in the aftermath of the 1943-1944 ethnic cleansing in Galicia and Volhynia of Poles by Ukrainians.
About 200,000 civilians residing in Bieszczady and Low Beskid mountains were resettled to formerly German territories ceded to Poland at the Yalta Conference at the end of World War II.
The whole deserted area overtaken by nature turned throughout the years into wilderness.
Western Carpathians, Bieszczady mountains, San river valley - Poland.
5th November 2014
lodowy.pl 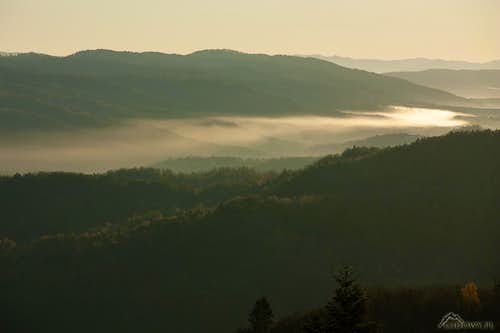