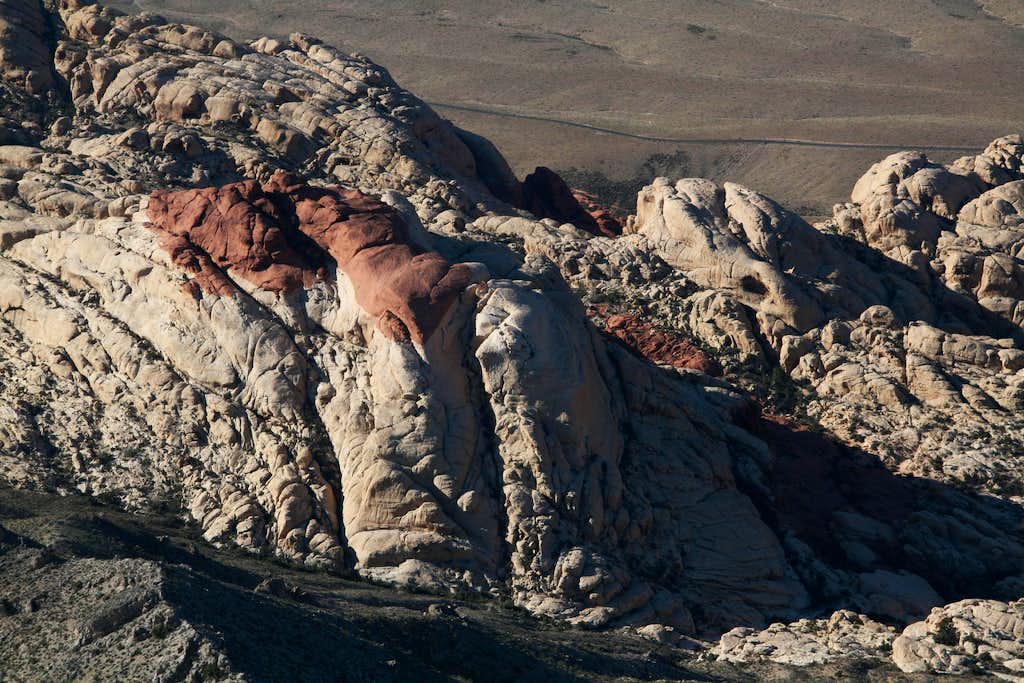 Red Cap and its north face as seen from Turtlehead Peak Enlarge for better detail-- click on Orig and then use the magnifier, after which you can scroll about to notice small details. You can even see the water-filled tinaja (tank) just below the summit this way. Red Cap (pretty obvious why it's called that) is the highpoint of the Calico Hills. As you look at this picture, you will see two gullies on the face of the peak (north face). The one on the right is the "White Gully" that offers an easier and less complicated route to the summit area than the route described in Rambles and Scrambles does. The gully on the left runs into a sheer wall that will be too hard for most climbers to ascend without gear (and I have no idea if the pitch is protectable, anyway), but it is possible to follow the narrower upper gully and intersect the Rambles and Scrambles route. I verified this information when trying to use the gully as a descent route in April 2011. Red Rocks, Nevada-- April 2009
« PREV NEXT »

Thanks-- it sounds lame, but I was cracking up at the thought of the title and couldn't help but include it!

Lame? Not at all - this site's full of glorified non-beta shots! Beta shots, as the controversy tells us, are the step-children of SP.

Please don't get me misunderstood. I love the
Calico Hills area, but I'm one (personal opinion) who doesn't always FOLLOW what's
written down in guidebooks.

... apparently, the wind does not hear.

Well, Larry, the HOT AIR that sometimes blows from the area may snap you from your boredom!

What would snap me "out of it" would be
holding the Summer Olympic Games on the Las
Vegas sands, and WATCHING some bikini-clad
women involved in a serious game of volleyball.

(Geez, am I allowed to say volleyball??)