Warren Fin (unnamed on topo) is a small peak 0.4 miles SSW of Mt. Warren in the Hoover Wilderness, Eastern Sierra. It resembles a fish's fin from some angles.

Warren Fin only has 200' of prominence to the NNW. However, it is a worthwhile summit and objective if hiking Mt. Warren; especially if coming from the Lundy Canyon via the Lake Canyon Trail.

There are a couple options to hike Warren Fin in concert with Mount Warren from either the south via Warren Fork; or the Northeast via Lundy Canyon.  Either will require some light scrambling.

From Tioga Pass, go 6.7 miles northeast on Hwy. 120 as it winds down to the same trailhead.

Take the Warren Fork trail northwest about a mile to where it peters out and climb north (to the right) another half mile to a small hanging valley at 10,200'.

Continue on up staying to the left of a gully and up the southwest slope another mile to the south ridge of the Warren Fin. The summit is .3 miles to the north.

Mt. Warren is just 0.4 miles further.  The total elevation gain for this route for both summits is about 3,750', since you will have to summit Warren Fin twice is doing both peaks. 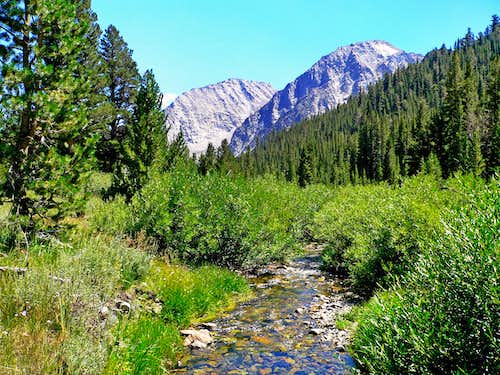 There are no permits required for dayhiking this peak.

Here are camping options in the area:

There is also the Big Bend, Aspen and several other campgrounds in Lee Vining Canyon starting two miles west of the junction of Hwy. 395 on Hwy. 120 off to the left, starting at 7,200'.