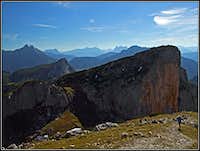 On the east ridge
Warscheneck is a mountain, or rather a small massif, in the south-east of Totes Gebirge (Dead Mountains in direct translation). This automatically means some of the main characteristics of this nice area: broad high karst plateaus with attractive limestone mountains rising out of them. Actually the massif lies on the geological border, so it is more complex in this aspect. But this holds more for its eastern, lower part.

Seen from the east, from the very frequented Wurzeralm, Warscheneck catches ones eyes with its horizontal bands appearance. These are especially picturesque when covered with first snow, when shadows and light on these rock structures make a true graphical masterpiece.

First of all Warscheneck is a hikers mountain. On a nice day people come on its top from various sides. Some ascents, as for example from Wurzeralm, or from any of the other two supporting mountain huts, are not very long. You need to overcome less than 1000 altitude meters. But, as elsewhere in Totes Gebirge all one-day ascents from the surrounding valleys are much longer and require good endurance. Marked paths on top are mostly easy, they can also be combined in various crossings of the summit of Warscheneck. Over the steep south-east ridge also an easy ferrata reaches the top.

The whole area is very attractive also in times of tour skiing. Many notches and mountain shoulders can be the goal of a ski tour, the very summit of Warscheneck can be reached with skis from the north, from Zeller Huette. 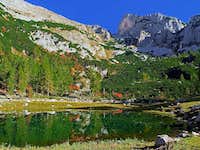 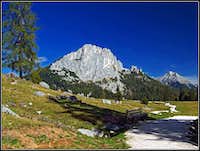 On Wurzeralm
On the south-eastern side of Warscheneck there is a broad plateau, on the edge of which there is Wurzeralm, a popular alpine meadow, which is nowadays turistically very developed. For many hikers and other tourists it is a goal of a visit itself. Besides huts and restaurants it offers easy walks, many learning trails, dealing with natural phaenomena, as for example to a small lake, along a clear creek, winding in many meanders over the plateau or towards karst limestone formations. Unfortunately due to tourism nature is also heavilly damaged on many places, as Wurzeralm is also a ski area in winter time.

Totes Gebirge massif from the SE, from the summit of Warscheneck

Summit
Being quite remote from the rest of Totes Gebirge massif, Warscheneck offers a great panorama. First, and most unique is the view towards the NW, where the whole Totes Gebirge massif stretches. We see it just from the side, where the most popular ascents on its higher summit, Grosser Priel go. Very attractive is also the view towards the east, where some interesting nearby hroups can be distinguished: Ennstal Alps with the picturesque Gesaeuse, Hochschwab, Ybstal Alps and towards the south Niedere Tauern. As from all other higher mountains of the NE part of Alps, also from Warscheneck in the distance Dachstein can be seen.

The most obvious trailhead for Warscheneck ascent is Wurzeralm. It can be reached from the road below Pyhrn Pass (on the NE side) by a special 'train cable-lift', a fast device which takes some 80 people some 600 meters higher in minutes. In summer it starts operating at 8:30 a.m. and the last drive in the valley is at 4:30 p.m. (2007). The bottom station lies by the road over Pyhrn Pass, so you exit Pyhrn highway on any side of the pass and drive up or over it. Otherwise on the southern side bigger towns are Liezen and Rotenmann, on the northern side Spittal am Pyhrn and Windischgarsten. Wurzeralm means the eastern approach.

Northern approaches go from Stodertal. We start the ascent either in Hinterstoder or in Vorderstoder or in some of other places on the road, which connects Pichl (by Pyhrn highway) and Hinterstoder. All these approaches reach first one of the two mountain huts, which support ascents from the north and north-east.

South-western ascents are much longer. They come over broad karst plateaus from Liezener Huette, along the long crest, connecting Warscheneck with the rest of Totes Gebirge massif. 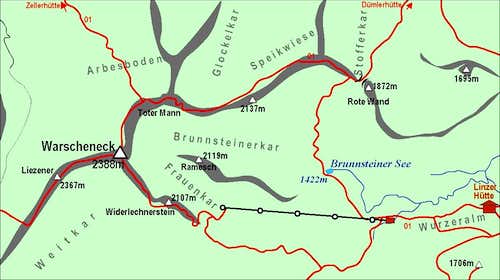 A self-made map of Warscheneck

Hikes And the Ferrata

Warscheneck has the season all the year. Winter ascents are of course accordingly harder, the most appropriate time is from June till October. As said the ski tour can be done from the north, other, ridge ascents can be in winter done with the appropriate winter equipment (ice pick, crampons).

In 1950 in the area, named "In der Höll", prehistoric images, engraved in stone were discovered. Anthropomorp and Zoomorph motives are represented (examples).