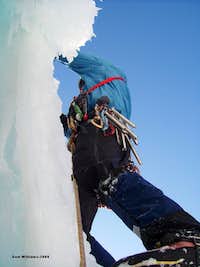 At less than 200 sq miles (2008), Waterton Lakes National Park is the smallest national park in the Canadian Rockies and does not lend itself to much alpine or technical rock climbing during the summer months. However, the ice climbing routes that form in the winter will compare to that of any of the other Canadian Rockies Provincial or National Parks. Waterton Lakes National Park contains the deepest lake in all of the Canadian Rockies (Upper Waterton Lake), so one can just imagine the precipitation in this park is prime to produce a few spectacular waterfall ice climbs. The park receives 1072mm of rain annually making it the wettest location in Alberta, not to mention also windiest with 100km/hr winter gusts common. With the help of the common Chinooks in the park, waterfall ice reins supreme during the winter producing over 40 published routes with grades up to and including WI 6.

The Park is open year around, but most facilities are closed in the winter. Cameron Lake Road and/or Red Rock Parkway can be closed as well, so it is always good to check in advance regarding weather and road conditions. Three to four motels do stay open in the winter, but the hostel does not (2008). I recommend the Crandell Mountain Lodge. In 2008 this was run by a young couple doing a super job and were giving ice climbers a fair rate. I believe only one of the motels (Kilmorey Lodge) serve food in the winter. Bottom line is that it is best to go into Waterton with supplies if you are going to spend several days climbing in the area. It basically resembles a ghost town during the winter months.

Listing routes with no first hand experience available is not what this page is about. Rather the listing involves first hand accounts only of waterfall ice routes within Kananaskis Provincial Park. The routes will be listed and maintained in ascending order of East to West. I can assure you that this listing only scratches the surface of what is available come January through April up and down the central Canadian Rockies. I personally attempt to climb 30 WI routes per winter and still have plenty more to experience.

Quick and Dirty, II, WI 4 "This route is well worth the drive into Waterton. The short approach and the climb's proximity to French Kiss, Le Pilier des Putains and Pearl Necklace make this area a great place to spend a day for climbers of all abilities. The southern exposure can make the climbing pleasureable but the Chinooks can eat this climb up very quickly. The climbing on pitch one is sustained 80-90 degree ice for 30 metres. It can be wet and the fluctuations with the temperature and sun exposure can lead to dinner plating atop the bulges."

Le Pilier des Putains, II, WI 6 "Le Pilier is about 50m long, so you will have to either bring up the 2nd or pull the rope for two leads. Keep in mind the right side of this wall, Quick and Dirty, requires two pitches of climbing. The left side of this wall is shorter in height. Joe describes the base of Le Pilier des Putains as “a hideously small and technically rotten free standing column.” I think we found it in better shape than that, thus the lower rating in our opinion. We rapped from a large tree as I recall, but you can walk off supposedly."

French Kiss, II, WI 3 "This is a nice 40 metres of grade 3 ice that is nicely combined with Quick and Dirty about 10 metres to the right. This can make for a nice day of ice climbing in a easily accessible area. It can also be used as a warm up for the more challenging Le Pilier des Putains and Pearl Necklace to the immediate right."

Experts Choice, III, WI 6 “If this climb was farther north and closer to a higher population of climbers, it would be a world famous ice route…”, Joe Josephson. "The 125m, WI 4, “Left Side” forms consistently every year and is by far the easiest of the three lines. The 130m, WI 5, “Right Side” is the least likely one of the three to be touching down and in fact was not “in” as of January, 2008. The 130m, WI 6, “Middle Route” is no doubt the jewel of this wall and represents a considerable piece of ice."

Alberta Highway 6 takes you to Waterton from Pincher, AB. It becomes US Hwy 17 as you cross the border into Montana. Keep in mind this small border crossing keeps banking hours. Drive into Waterton Lakes National Park, from Highway 6, through the park kiosks and proceed towards the town of Waterton.

Although you are required to purchase a national park pass to enter Waterton Lakes National Park, the only entrance or exit which is on the east side, is closed in the winter and the gate left open. This pass is good for all four national parks. If you plan many visits to Canadian National Parks within one year, you should purchase an annual pass. There are no permit requirements to climb in Waterton Lakes National Park, but all camping is regulated. There is also a backcountry permit required if you plan on spending a night in the backcountry versus the town campsite(s). This can be obtained via the parks website which is included in the camping section below. Waterton Lakes National Park headquarters are located on the right side of the road across from the Prince of Wales hotel, which is an historic landmark built in 1927.

I advise checking with Parks Canada for any area and/or trail closures.