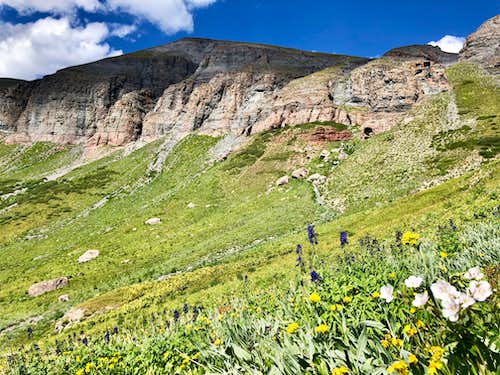 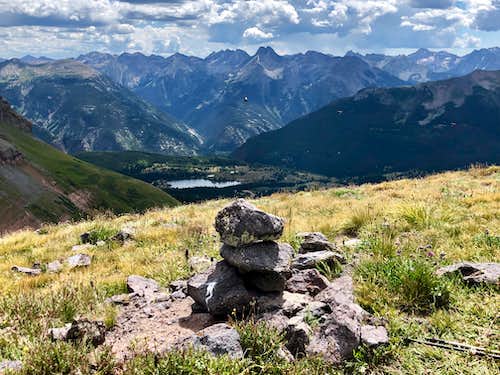 West Turkshead Peak
West Turkshead Peak (formely knowned also as V 8) is a nice little peak near the Molas Pass, easily accessible from Million Dollar Highway. Nearby towns are Silverton and Durango. The peak can be climbed alone or with conjunction of nearby 13ers - nice combination would be unranked 13er Spencer Peak, and 2 ranked 13ers: Grand Turk and Sultan. I have done all those peaks and chose to hike up only West Turkshead Peak as a nice easy day.

The hike is easy, not really a trail, or more hard to follow trail. It is mostly on grassy slopes and NO scree. The views are excellent in all directions.

The Guide to Colorado Mountains with Robert Ormes provides only a brief mention: "Drive south from SIlverton on US-550 approximately 6 miles to the Little Molas Lake turnoff (not Molas Lake). Drive west 1 mile to the lake and park. Climb north into and up a well defined narrowing basin between two rocky points. These were called West Turkshead Peak (12,849') and Turkshead Peak (12,734') by the SJM (San Juan Mountaineers).

From Durango drive north on US 550 for 42 miles and and then turn west on the well signed road for Little Molas Lake. It takes about 1 hr from Durango. 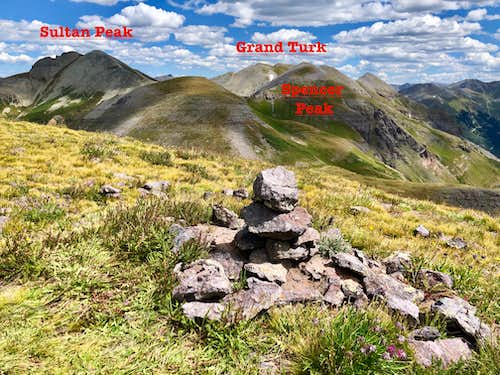 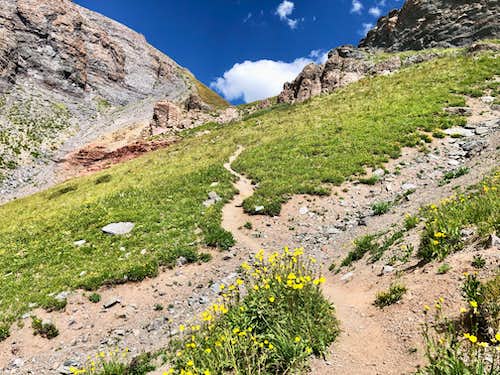 Trail between West Turkshead Peak and Turkshed
The standard route ascends the narrowing and ascending valley between West Turkshead Peak on the west side and Turkshead Peak on the east side. Both peaks appear ragged from the valley. There is not really an obvious trail, but higher up in the valley you will come to a nice trail. Going is easy over grassy tundra filled with wildflowers during the season. Once you reach the pass between those 2 mentioned peaks continue slightly north and reach the gentle broad northwest slopes of West Turkshead Peak. There is a nice cairn and also an official benchmark on its summit. The views are spectacular in all directions: Colorado Trail running below, nice views into Grenadiers.

Unranked Turkshead Peak on the opposite site of valley is more complex and involves class 3+/4 scrambling from the south.

Hiking and parking are free. The camping is free. Campground is often full. No reservation accepted.

Summer and early fall are the easiest. Remember you are in high altitude - trailhead is above 10,000 feet. Winter and spring are more difficult because of a snow cover and avalanche danger. Always check northern San Juan Avalanche report prior venturing. The approach is not bad from US 550 road (=Million Dollar Hwy). The 1 mile drive in the summer is easy to negotiate on snowshoes or skis.

Little Molas Lake Campground is located at the start of your hike. It provides primitive camping, accessible by 2 WD vehicles. There is no drinkable water or trash service. There are toilets in the campground and at the trailhead for Colorado Trail. Campground is poplar since Colorado Trail passes through.

I think your elevation is a little bit too high....

Both List of John and Peakbagger are listing the same elevation. Unranked Turkshead Peak to the east is slightly lower at 12,734 feet.

You've got it listed as 128498 feet, which would make it the highest mountain in the Solar System :)

Hey Liba! You have this peak listed as the highest mountain on earth!! I was wondering why it appeared first on the list of San Juan Peaks haha