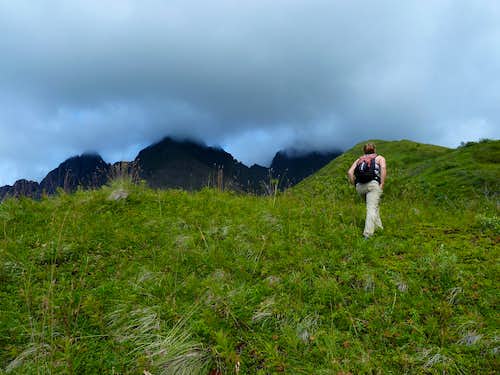 On the gentle middle section of the southeast ridge

The Twin Peaks rise more than a mile directly from sea level in a mountain front reminiscent of the Tetons. The name notwithstanding, there are three twins: East Twin, West Twin, and Goat Rock. West Twin is the second highest of the group, and like its higher neighbor to the east it offers a superb grandstand over the Mat Su Valley far below, fjord-like Eklutna Lake, and the ice-bound crest of the Chugach Range. West Twin is an easier scramble than East Twin once you're on the mountain proper, but the bushwhack approach makes it a more arduous undertaking and deters most peak baggers. West Twin is probably climbed no more than three or four times a year.

West Twin is climbed from one of several points on the road to Eklutna Lake. Take the Eklutna exit from the Glenn Highway (Alaska Highway 1) about 26 miles north of Anchorage, and follow signs to Eklutna Lake.

Although there are other options, the basic route to the top of West Twin is via the prominent southeast ridge. There are three ways to get on this, all of which have their own distinct disadvantages.

The method I (slightly) recommend--because it gets the pain over with quickly--is to begin at elevation 1000 feet at the Eklutna Lake Overflow Camping Area. This is the large field on the left just after you pass the entrance kiosk at Eklutna Lake. From this field you will be looking straight at the broad snout of the southeast ridge, and you'll see open grassy areas reaching tantalizingly close to where you are. About half a mile of moderate bushwhacking will get you to one of these clearings, and then a couple of thousand feet of miserably rubble-infused steep grass gains the ridgecrest. 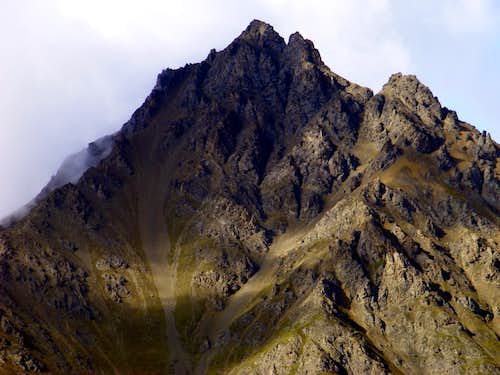 Last thousand feet
Another, more common way to get on the ridge is to start with the Twin Peaks Trail, leaving from the main trailhead parking by the lake shore, elevation 900 feet. This prominently-signed trail climbs 1800 feet in 2.6 miles, passing one park bench and continuing to a second one at treeline. It’s on an old road bed, which makes for excellent footing and fast travel--enjoy it while you can. From the end of the trail at the second bench, descend 100 feet on a good path to the stream below and scramble up the far bank. Now the fun part: about a mile of sidehilling in waste-high brush takes you to the deeply eroded gully that comes down from the pass between East and West Twin. Cross this nontrivial obstacle by any method that seems appropriate, flounder up the far bank, and trudge up another thousand feet of steep grass to the ridge. (All this will be simpler--but potentially riskier--if done on snow in early season; for that, an ice axe, crampons, and avalanche assessment skills will be wanted.)

A third option is to approach via the route described for Mt. POW/MIA. This gives you a higher starting trailhead (1300') and zero bushwhacking. But a 600-foot elevation loss to the col between POW/MIA and Goat Rock more than squanders the advantage of the higher trailhead, and the mile of sidehill scrambling to circumvent Goat Rock may well turn out to be a good deal worse than the bushwhacking on the other routes. You're on your own if you try this option.

Once you finally get there, the crest of the southeast ridge is a delight. It starts with a beautiful grassy ramble and progresses to mellow scrambling among pinnacles. Very near the top, most people will step to climber's right and use a bit of the gully (mentioned as a descent route below) to avoid bigger towers. Where the southeast ridge encounters the main north-south crest, there's a little unavoidable exposure to reach the pointy summit. Overall, the climbing in summer conditions never exceeds class 3.

For descent, the very broad, very loose scree gully east of the ridge can be an efficient option. It also offers a reasonable early season snow route for both ascent and descent (an ice axe and self arrest skills will be needed). 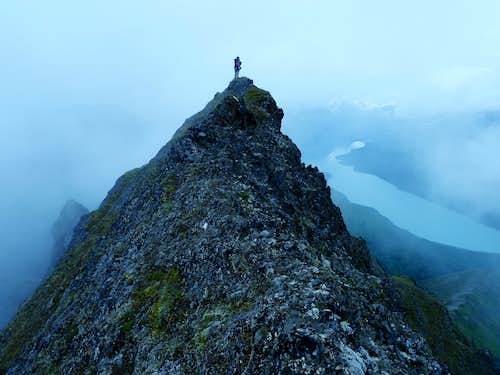 Summit of West Twin, August
Backcountry camping is legal in this area and wouldn't be too hard to do in the tundra just beyond the end of the Twin Peaks Trail. Groups of more than a dozen will need a permit. Campfires are not allowed.

At the foot of the mountain there is nice car camping at Eklutna Lake Campground, with 60 sites and basic facilities.

Unless you have an annual pass, there is a $5 parking fee to use the parking at the end of the road. Bring exact change.

The entirety of the mountain itself is managed as part of Chugach State Park under a management agreement, although portions of it are not within the formal, statutory park boundary. Park regulations apply.

West Twin was called East Twin by early White settlers, with its close neighbor (now Goat Rock) considered the "West Twin" and the more distant present-day East Twin going by the name Goat Peak. The USGS got it all mixed up when they mapped the area many decades ago, and that has caused a name shift. One reason the new names have stuck, no doubt, is because from one particular direction--which happens to be the direction most people hike from nowadays--modern-day West Twin and East Twin really do look like a pair of twins. Anyway, the new "West Twin" moniker for the second highest of the three peaks has stuck and is in universal use today. 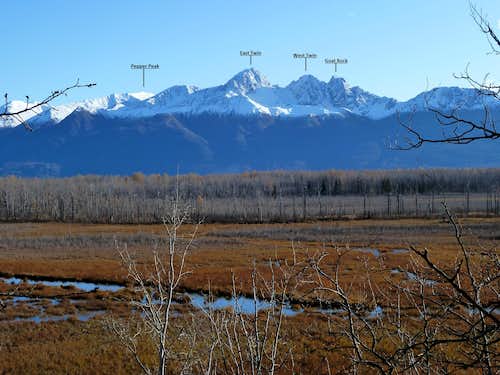 The Twins and neighbors from the Mat Valley. Click through to enlarge peak labels.

Description of trails at Eklutna Lake 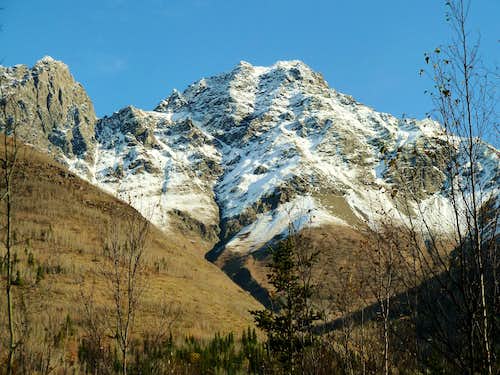 Southwest Face, seen from Eklutna Road
Weather in the area of the Twins can be dramatically different from Anchorage. Below is a weather forecast for Palmer, below the north face:

For weather at Thunderbird falls, below the outlet of the Eklutna Valley, click here. There is currently no weather data available online for the Eklutna Lake trailhead itself, 900 feet higher and farther into the mountains.