Due to a tragic rock slide in the Western Breach in January 2006 that killed several climbers, this route was closed until further notice. I have received word that the route has been modified to reduce expose to rock slides and is now open. I received word in 2015 that the route was open, BUT there was another rock slide that killed a couple climbers while my friend and his group were climbing this route. I am  not sure if this route is currently open (December 2015) but if it is I
would use caution and judgement if you decide to use this route. 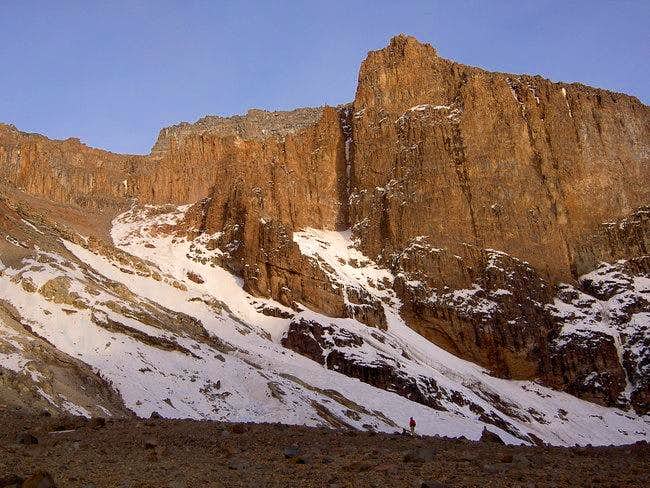 The route is as described in the previous section. Every day after reaching camp from Shira Camp and above, we would also do an acclimatization hike and gain about another 600- 1000 feet before going back down to camp. We used the old slogan, " Hike High, Sleep Low." After being on this mountain twice now and seeing most all of the most popular routes I am convinced that there is really only one secret to success on this mountain: Acclimatization. I believe anybody with reasonable perserverance and good training can make this mountain IF they take the time to approach it slowly and acclimatize properly.

From my own experience and from seeing others, I think the Marangu Route is a chancey proposition to reach the summit- even with an extra acclimatization day at Horombu. Machame Route gives better hope for the summit- especially with an extra day at Karanga. The Western Breach is billed as more difficult, but with a slow proper ascent I think it is really easy. By going the way we did we had the choice to either summit from Arrow Glacier Camp or have a second summit attempt possibility the following morning from Crater Camp. We chose to summit directly from Arrow Camp as we were feeling strong when we got to the crater rim. Some groups elected to just camp that night and summit the next morning. Either way, of the 21 climbers that day at Crater Camp, we all made the summit. We summited at 3PM in the afternoon and had the entire summit to ourselves. We were fresh and didn't have any of that "take 10 steps and rest" feeling. I think it was due to the slow ascent and proper acclimatization. We also drank tons of water everyday and did our best to eat all the high carbohydrate food the cook made up for us. I truly believe our guide did us a valuable service by recommending we go the Western Breach.

The only part of the climb that was "difficult" was the actual climb from Arrow Glacier to the crater rim. It was steep, and there was a bit of class 3 scrambling. But our guide reminded us "pole, pole" there was no rush. We just took our time, acclimatized slowly- climbed so as not to get into any oxygen debt and enjoyed ourselves.

We climbed in February 2005- the dry season. No ropes or crampons were required. Just good hiking boots and a sleeping bag rated at 15 degrees or better were the main items. The prevailing winds are from the Indian Ocean to the East and are felt on the climb up to the summit rim from Kibo Hut or Barafu Hut. We had virtually no wind as the mountain blocked it out as we climbed the Western Breach. We had a parka and rain gear and such, but never encountered rain or cold winds.

I was to trek the Western Breach - beginning January 4th and woke in Moshi to the tragic news of the death of the 3 trekkers.
Tusker modified our route which took us thru the Lemosho gate up to the Lava Tower, Shira 1 and 2, Karanga Valley, Barranco Wall, Barafu, sleeping in the crater (quite an experience) and summitting Uhuru (I made it!) at 6 AM with two nights coming down.

It was dramatic, tough, scenic, tough and something I would recommend. I will post a longer report but, regrettably, Western Breach has reopened (PLEASE check out the firms you travel with - Zara - which has lost climbers and porters has a HORRIBLE reputation in Tanzania but still gets hyped in the US and in publications) and now the only difference is you need to sign a waiver. Western Breach is geologically unstable and the route on went on - see above - has all the drama, trauma and difficulty anyone could want.

We are leaving on Sept 2nd to do this route. Considering it is closed indefinitely Good Earth has an alternate route around the closed area from Shira II we will go to Baranco Camp then to Barafu thru the Karanga Valley. Hope this helps. Any additional hints and help would be appreciated as this is a first for us. Thanks! Troy

Myself and 4 friends climbed the Lemosho - Western Breach route from 11 December to 16 December 2019 with a summit day on the 15th of December. We had reasonable weather the majority of the time considering the time of year we went. The first 4 days were easy treks up to our Arrow Glacier camp. The 5th day was our summit day and the breach was much different than what photos and descriptions had lead us to believe. Given the season I believe the breach was probably close to peak snowpack which made for some impromptu route finding and fairly steep snow slopes. Given the angle of the chutes that we climbed and traversed I regret having not brought an ice axe and crampons. We were given microspikes by the guides, however full crampons and an ice axe would have made the route a walk in the park. The exposure on this section of the climb was much greater than anticipated and there is no accurate representation of the route we took online. The snowpack was in fantastic condition and was similar to cascade concrete. If self arrest were necessary and we had ice axes it probably would have been very effective should we have needed to try. There is no doubt that the marjority of the breach we climbed was a no-fall zone. Overall though I'm extremely happy that we chose this route over any of the normal routes that summit via the eastern side of the mountain. We were alone from above Lave Tower Camp until descending from the summit. Once summiting we descended to High Camp the same day and then back to the exit gate and hotel the next day.