Located about 8 miles outside Red Lodge, Montana is a nice spire on the south side of Highway 212 that commands anyone's attention as they begin driving south out of town. You will not find any information about this spire online except for a couple blogs of local Red Lodge climbers. It's a rarely climbed spire and a well kept secret to the small Red Lodge climbing community. There are two established routes on the spire. Both are nice, half-day outings and offer fun climbing in an alpine setting despite being so close to town. 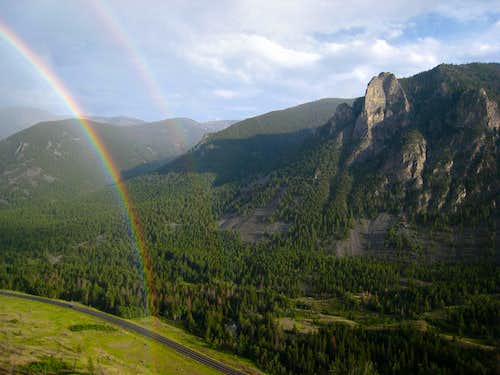 Westminster Spire with a double rainbow. Highway 212 below

From Red Lodge, drive south on Highway 212 out of town and go about 8 miles and turn left onto the signed Westminster Spires camp road. Don't drive into the camp but park along the side of the highway and out of the way. This is about 1.5 miles before reaching the Lake Fork Road. Walk over the bridge and through the small camp staying away from any buildings and begin ascending from 6,520 feet into the trees and up the gradually steepening slopes trending to the right. Aim for the base of the spire and enter one of two prominent gullies at about 7,000 feet. The left gully heads up and left of the north ridge while the right gully heads along the opposite side and along the west face of the spire. For the 5.9 North Ridge route (also called the Kennedy-Kanzler route), continue up the left gully and to the base of the north ridge. For the 5.5 West Arete route (also called the Dvorak-Rausch route), continue up the right gully and at about 7,500 feet, continue up and to the right aiming for the base of the west arete which starts at a 30 foot headwall covered in moss and usually wet. At this point, the west arete dives into the ground and splits this gully into two branches. Allow about 1.5 hours for either approach as the terrain is steep and covered in downed trees and loose soil. 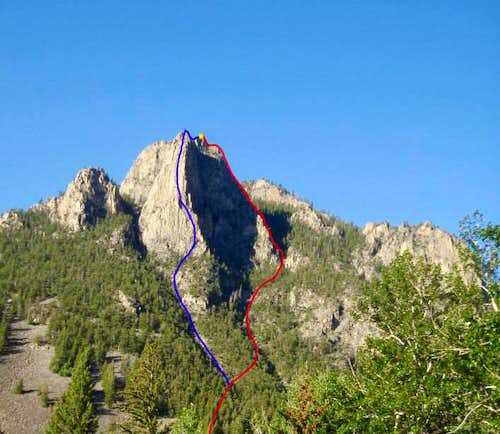 Red is the West Arete (5.5) and Blue is the North Ridge (5.9) seen from Highway 212 near the turn-off for the Westminster Camp where you park

I will describe the Dvorak-Rausch route which is the west arete. This 600 foot route is mostly a scramble with a few low 5th class steps in the 5.4-5.5 range. The entire route can be simul-climbed however due to many rocks that can snag the rope, it's better to reduce the rope length between the two climbers. There is a fair amount of loose rock on this route so use caution. From the 30 foot headwall (see right photo below), climb up a brushy slab to the left of the wall and gain the west arete. Climb the arete all the way as it starts out heading south but makes a broad left turn and heads east. The crux of the climb was lower down on the arete where you skirt around some rock towers.

As you climb higher, the exposure on both sides of the arete will increase and the Kennedy-Kanzler route will be easily visible to the left (east) across the gully. The gully below you to the right will be your descent gully so take note.

Near the summit, pass by a snarled tree and climb the final 30 foot vertical step (5.5) to the flat summit ridge and walk to the high point. Enjoy the spectacular views as you can look west directly up the Lake Fork valley and see the east face of Whitetail Peak at the head of the valley! I will add a route description for the North Ridge (5.9) route once I do it

To descend, walk down to the south and scramble down 20 feet until you reach a cliff above a deep col between you and the next spire, which is slightly higher (see center photo below). Scramble down to the tree where there are plenty of slings. There are two 20 meter rappels both off trees. As of the summer, 2013 the anchors were all good. Once down to the talus below, descend the gully as it curves around to the right following the base of the arete you just climbed. You will reach the top of the 30 foot headwall you started from and a short, third rappel off a tree to the left gets you back to the start of the route. From here, return back the way you came.

This can be climbed anytime it's warm enough to comfortably rock climb...April through October probably makes most sense, however since it's so close to the highway it can be climbed year round with the same approach. 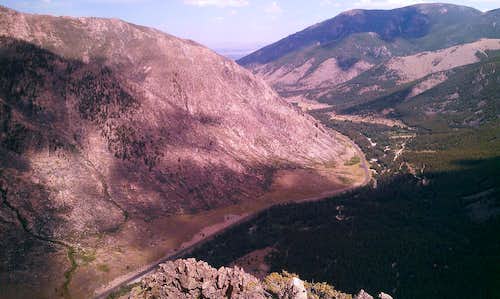 Looking north towards Red Lodge from the summit

No need to camp for this climb however numerous dispersed camping can be found up the Main Fork Road. There are no camping areas up the Lake Fork. No red tape!