Wet and Misty on Wallface Mountain with Don Mellor 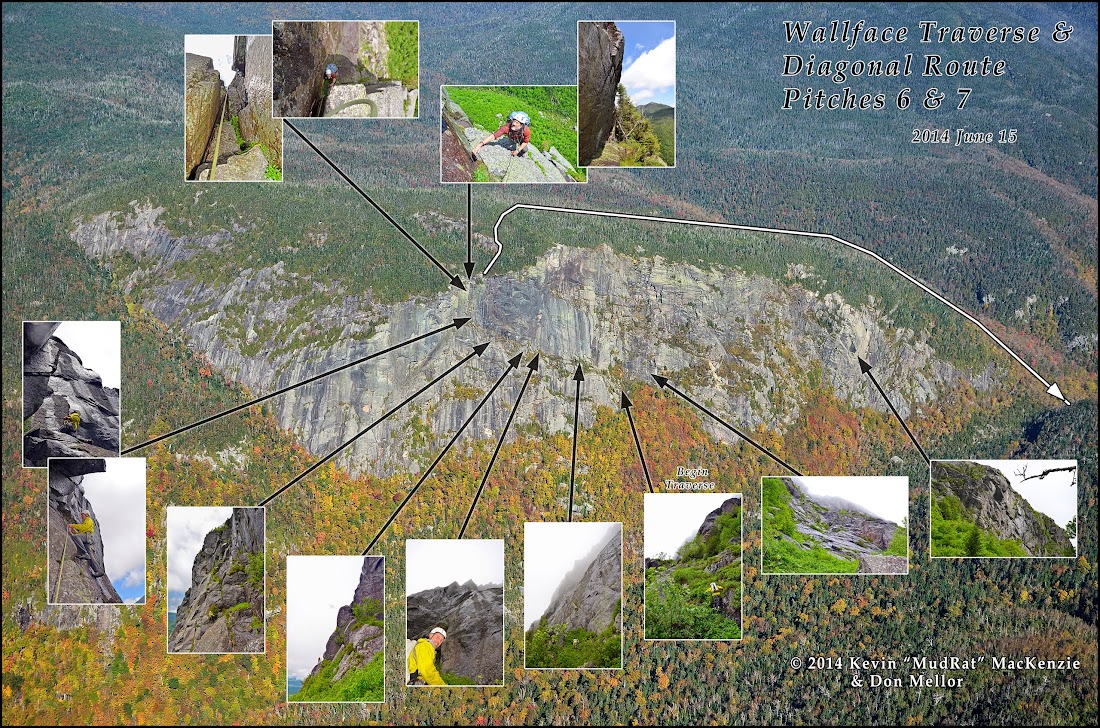 I say this every now and again, but some days defy description. Words seem far too shallow and photographs capture only a fleeting moment in two dimensions. The setting of Wallface combined with the personality and expertise of my partner created a day that I won’t soon forget. In fact, I’ll likely be processing everything that I learned for a long time to come. There's no substitute for experience and Don has been up Wallface an estimated 60 or more times.

I reflected on the forecast for a bluebird day as Don Mellor and I walked through the damp morning air toward Indian Pass. Thinking back to the forecast, I thought, “Sunny day, my a#$.” Rain doesn’t deter me most of the time, but it certainly doesn’t thrill me on trips with vertical cruxes. That said, I
had no inclination to do anything but continue onward with the adventure.

We remained largely dry for the first 5 miles though most of the trails were muddy streams. Drainage streams from the MacIntyres were a mildly swollen, but manageable. Finding drinking water wouldn’t be an issue during the trip. The Adirondack anomaly of hiking with dry feet ended at Scott’s Clearing.

Waist high bushes saturated our pants and feet during the first few steps. A mile later at the height of land, I felt a chill as we studied the Mental Blocks area where the face is broken into various geometric shapes, some overhanging. It was truly a natural work of art. I listened as Don pointed to various routes he’d climbed and the general layout of the wall. Somewhere during the conversation, it dawned on me that if someone had suggested climbing anything on Wallface, I’d have responded that they were insane. My, how times change... 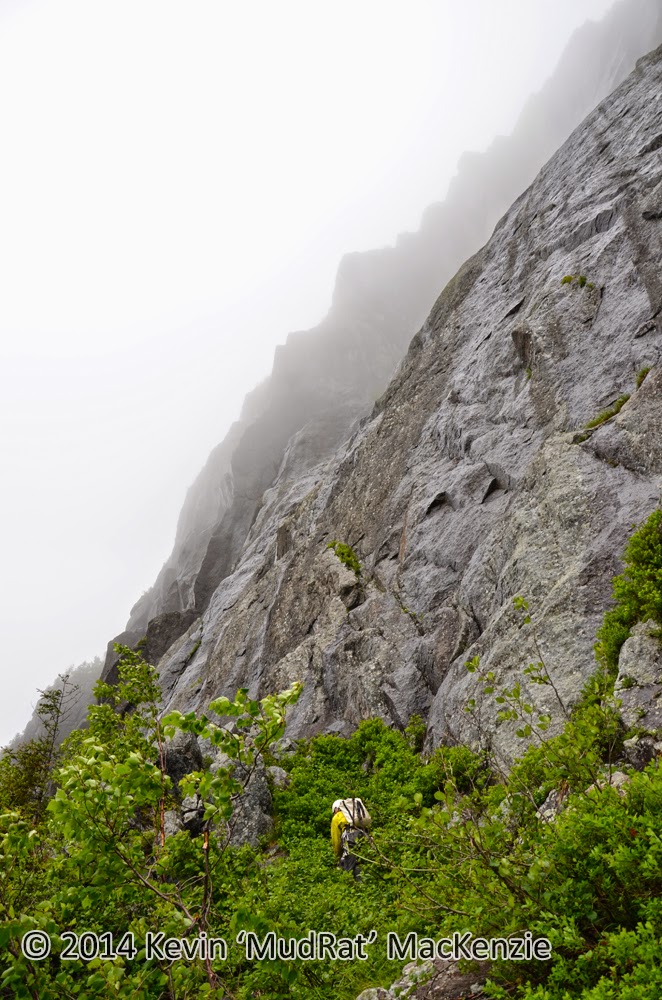 Beginning the traverse under the Shield area.

We waited for the sun, but soon gave up and began to bushwhack up through the talus in hopes that it would eventually clear. Many of the blocks below Wallface dwarf even the largest boulders in Panther Gorge. Even the smallest pieces still protected ice in their recesses. Before long we were at the base of the Central Depression, an area between the Mental Blocks Buttress and the Shield area.

Don’s plan was to traverse under the slab of the Shield and ascend pitches 6 and 7 of the Diagonal Route (5.8 YDS). We roped up at the beginning of the traverse and worked our way across through a variety of small vegetation and sometimes greasy rock—the usual Adirondack scrambling terrain. The Shield is an impressive piece of stone leading up to jagged overhanging blocks. The blocks were still partially shrouded by the clouds, a light gray against a white background. As a photographer I could have played with aperture settings and portions of the cliff all day long.

A peregrine falcon flew north below, rode an updraft and drifted back by us at eye level; curious, but not agitated while we traversed across the face. We made excellent, never more than a minute between my arrival and Don’s departure to the next belay. A wide rising ramp of broken stone and slab came into view after rounding a small buttress of stone, a particularly dramatic area. Above and south were the upper dihedrals of the Diagonal route. The angular lines in the area were simply breathtaking...especially lit by the sun; it had finally broken through. Even Iroquois and Marshall were shaking off the mist. 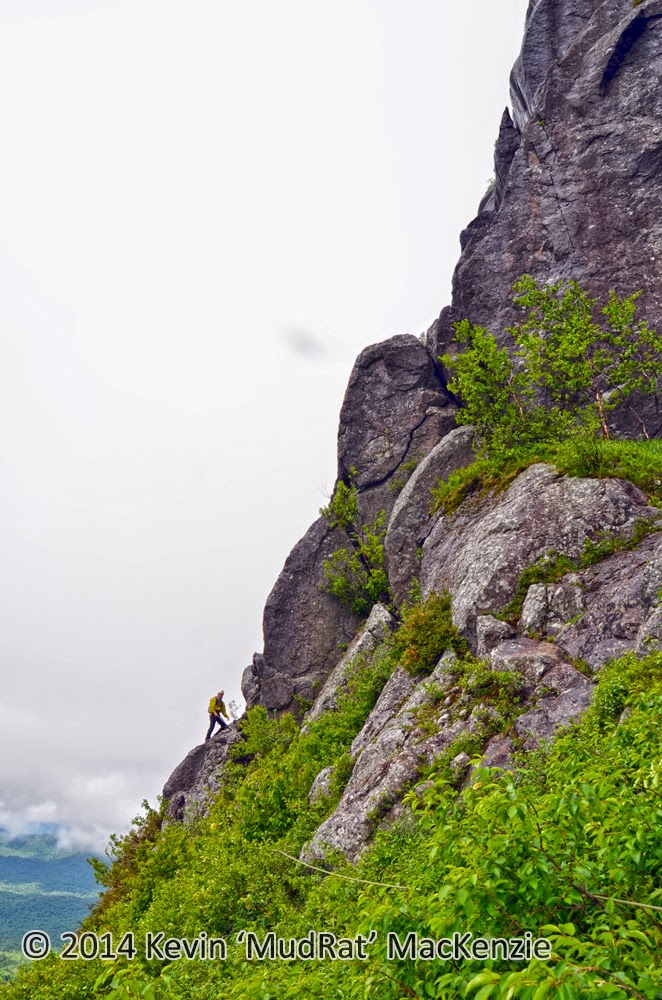 Don standing on an outcrop before rounding the bend. Don under the left-hand corner of the Shield area. 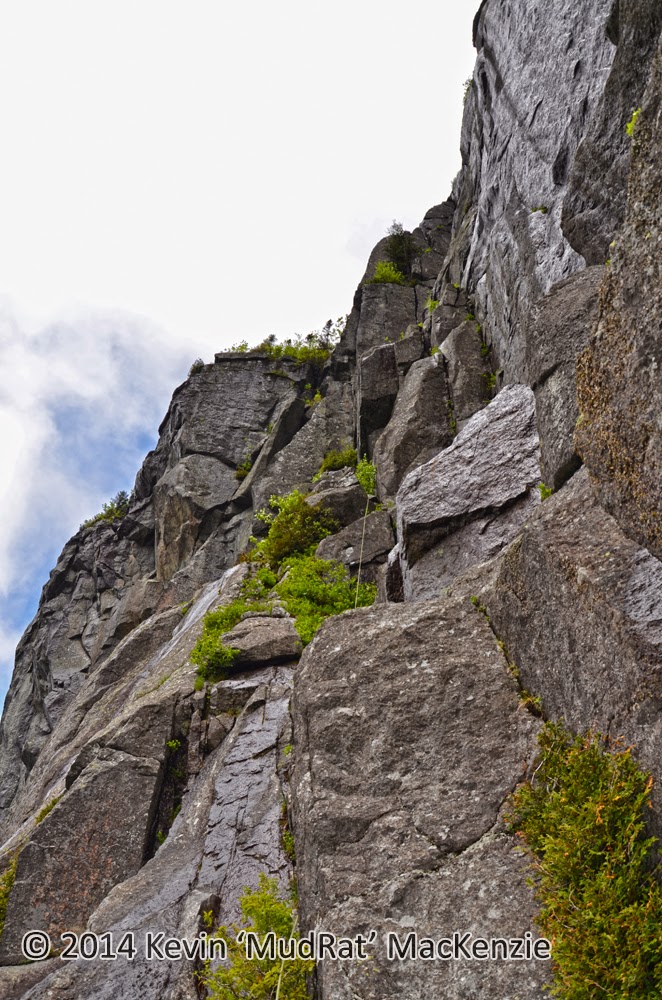 Follow the rope...blocky ramp leading up to the 6th pitch of the Diagonal route.

We took a short break at a nice terrace on the Diagonal Route below the sixth pitch. I replaced trail running sneakers with rock climbing shoes and ate a snack before committing to the real climb. I was still on terrain that I was comfortable with as a scrambler, but that’s not to say I wasn’t comforted by the rope.

Watching Don place gear was like to watching a master craftsman at work. I belayed him as he worked up a crack and then up a small chimney before disappearing from sight. The crack was easy, but I began grunting with exertion with the odd moves required to work up the chimney and around a small corner onto some wet muddy slab. I heard, “You’re making noise, that’s good,” echoing from above. I laughed while continuing to grunt...an interesting combination.

The view was wonderful, especially of the MacIntyre’s set against the cliff with a little mist on Iroquois. It was nice to be climbing out of my comfort zone, but protected by one of the best. What a day!

The most challenging pitch was during the last 8 feet of the top pitch. Perhaps my opinion would be different in dry conditions, but such was not the case. My hands became cold while climbing in the shadows of the lower part of the 7th pitch, but completely numbed when I needed them most. Both walls of the large corner and crack were soaked as was I by the time I finally reached the sun-warmed slab at the top. Don’s reassuring thunk on the helmet was much appreciated! The first blackflies of the day were also warm and awake. The day had totally cleared by about 1:30p.m when we reached the top.

A short traverse along a wall and up to the forest led into the bushwhack phase of the day. Thick krummholz led to moderately knit forest and the top of the ridge. Blowdown littered the area heavily in some places, others were rather pleasant. A track northeast led to a steep drop beyond the cliff band and down to the path...in all not a bad bushwhack at all.

Thanks to Don for letting me into your vertical world for a day! On the crack of the 6th pitch/Diagonal Route. 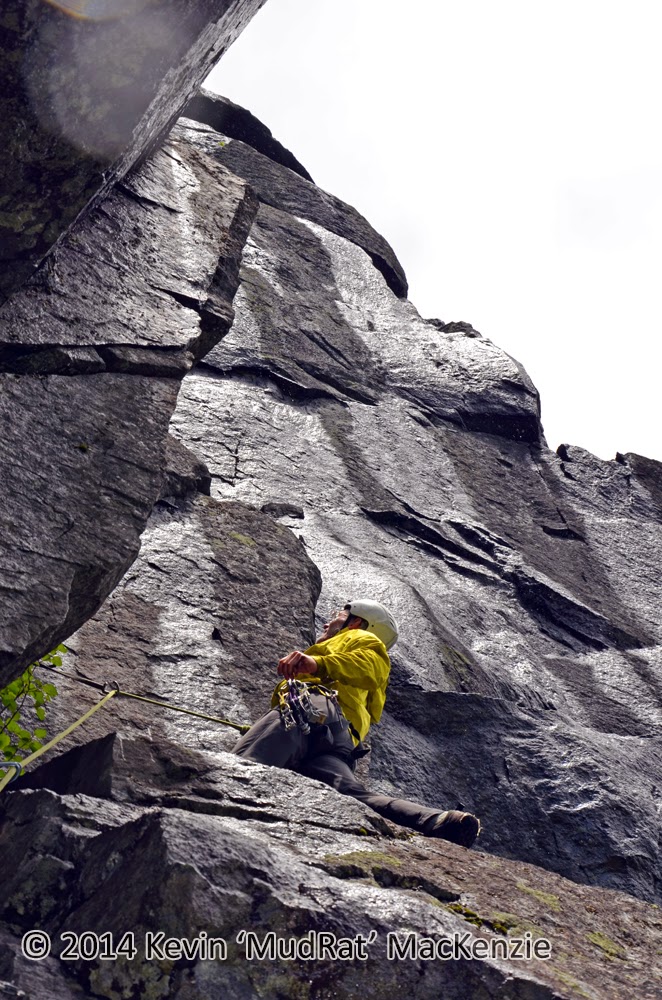 Still on the 6th pitch. 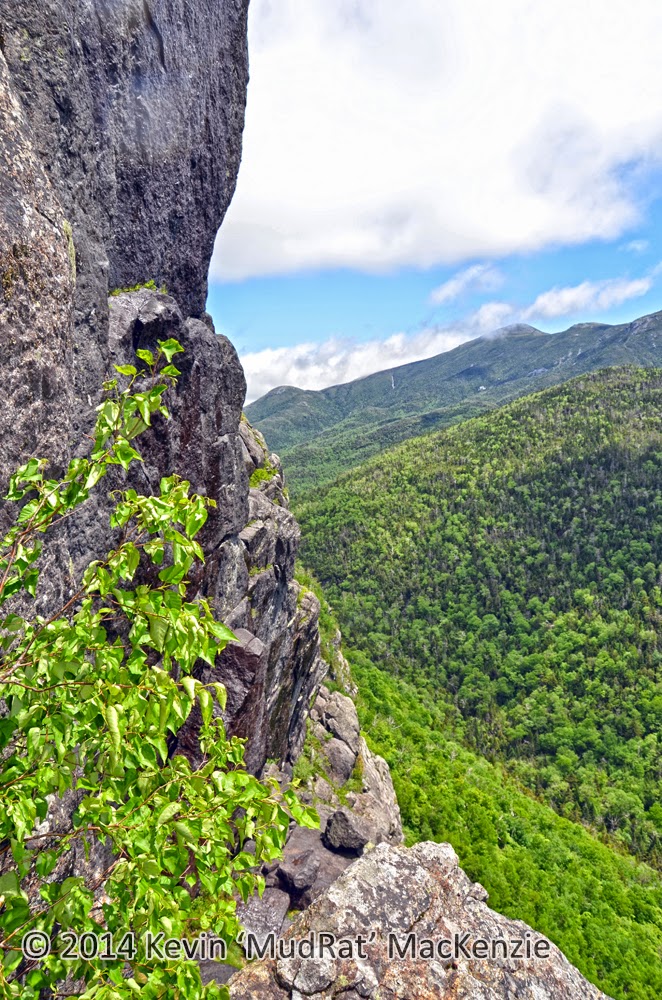 View from below the 7th pitch...priceless. 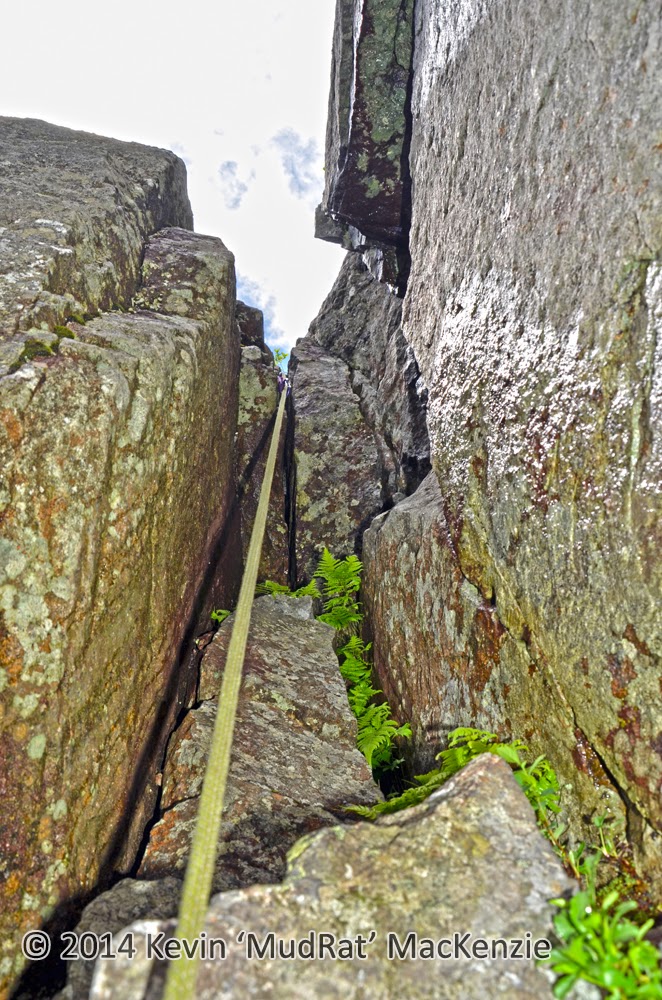 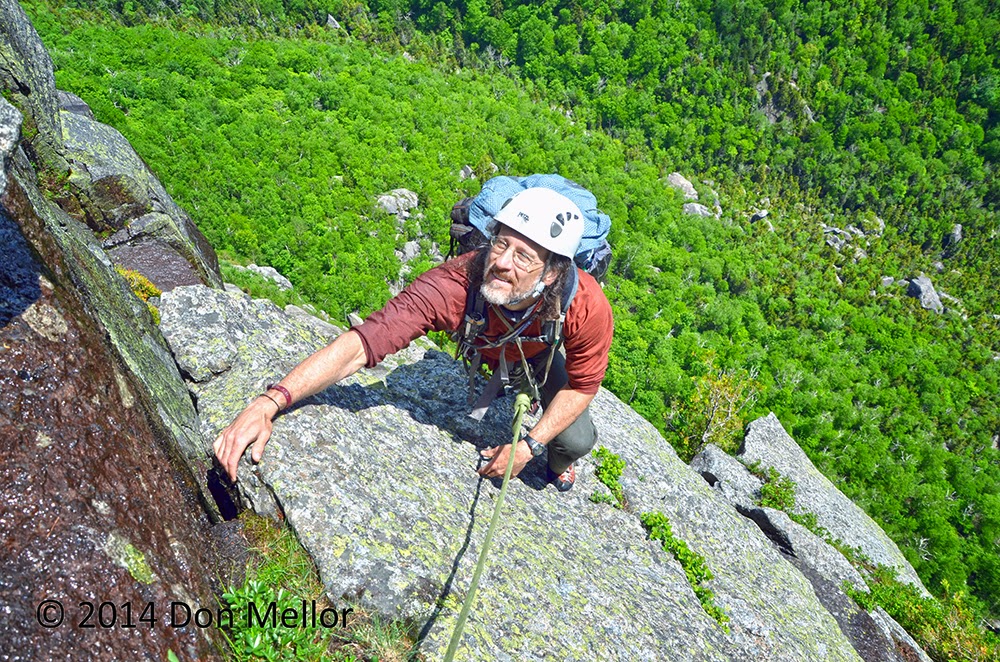 Topping out on slab.

I read that John Case climbed on this cliff and later dealt with King Saud for ARAMCO!

Love the location and format

of your trip report. You make a climbing trip really come to life for someone like me who doesn't climb anymore. While I'm sure it isn't the preferred style of report for some SPers I like the way it gives an overall view of the trip. And your pictures are excellent!

Thanks for writing it and sharing!

Re: Love the location and format

Thanks for the compliment and glad you liked!
Yeah, I don't really follow any template other than my own and my mood dictates how/what I write. I do try to really show what the area is like as much as possible, though nothing's like the real thing! ;)