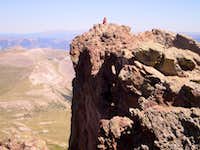 Colorado’s ultimate Tundrathon. Combining a climb of Wetterhorn and Uncompahgre in a day from the Matterhorn Creek trailhead is very achievable for most strong hikers in cooperative summer weather conditions. Much of the route is over 13,000 feet and provides one of Colorado’s great acclimatization routes for higher mountains--much like the Decalibron outside Breckenridge. In winter, this route requires a long ski or snowshoe from wherever the Henson Creek-Engineer Pass road closure begins (usually 4-5 miles outside of Lake City). 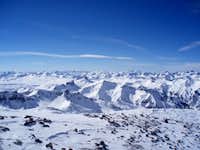 Preparing for Denali? Consider an expeditionary style run at this route in winter with variable weather conditions.

A climb up the Southeast ridge of Wetterhorn without adding a trip over to Uncompahgre is a short 6.5 miles from the Matterhorn Creek trailhead. Adding Uncompahgre to the trip can extend the hike by roughly 6 to 9 miles depending on whether or not snow conditions allow a climb of Uncompahgre's direct West Face, or whether an end-around to the Southeast Ridge is preferable to a long, miserable slog up loose and dangerous scree. Wetterhorn and Uncompahgre sit 3 miles apart across rolling tundra. In summer conditions, once one reaches the saddle between Matterhorn Peak and Uncompahgre, the trail becomes obvious.

In all but winter conditions this route is non-technical. The South Ridge of Wetterhorn is class 1 and 2 hiking with one steep class 3 pitch near the summit with very solid holds. The West Face of Uncompahgre is a class 2 snow climb in Spring and early Summer and not recommended when the route is dry. In dry summer conditions or early Fall conditions the South Ridge of Uncompahgre is extremely gradual, such that it makes an ideal place for summit acclimatization in preparation for higher peaks due to the relative ease of getting a full pack to the summit. Rock wall barriers pocket Uncompahre’s summit to serve as wind breaks for tents for this very reason. 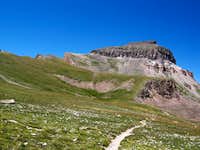 on Wetterhorn’s final 100 feet. Deep and sudden snow could be a hazard due the length of the route and the added time it would necessitate. Both Wetterhorn and Uncompahgre are also very exposed in some places not far off of the trail or off of either summit. The exposure is generally obvious and avoidable, but still exciting to would-be BASE jumpers. 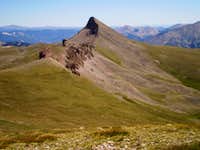 Both mountains are made from solid stone cliffs--eroded plugs and crater rims from an earlier volcanic era--surrounded by volcanic sand. This provides sharp contrasts between gradual even slopes and short vertical sections. Additional technical challenges on some of the cliffs that surround either mountain could add interesting variations to a combo route, if one is willing to hike in technical rock gear and spend the time exploring.

From Lake City, follow the Henson Creek—Engineer Pass road 9.1 miles to a sign pointing the way to the North Fork Henson Creek Road. Four-wheel drive is recommended for the North Henson Creek section of the road. Follow this rough road 2 miles to the well-marked Matterhorn Creek trailhead. From this trailhead the route is initially well marked and easy to follow past timberline. 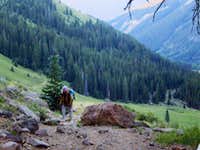 Once past timberline you will come upon a clearing where the trail either forks to the left, or takes a right turn up to a switchback on a hill. Take the trail to the right. There is a sign at the trail junction that does not specify the correct route into Matterhorn Basin (although a recent hiking party had faintly scratched “Wetterhorn -->” into the sign with a pocket knife). Once over the hill, unless in whiteout conditions, the Matterhorn basin is obvious. Wetterhorn and Matterhorn stand at the end of the basin, connected together by a steep ridge.

Starting with a climb of Wetterhorn, the trail climbs northward, then winds through rocks and tundra to gain a spur at the ridge directly left of the obvious summit. The trail follows this southeast ridge fairly directly to the summit. Cairn spotting in a few ascent gullies help guide the way for summer climbers. 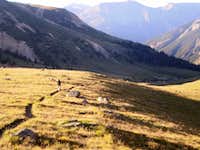 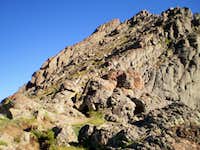 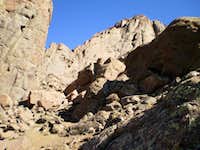 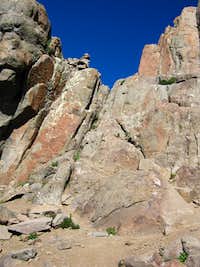 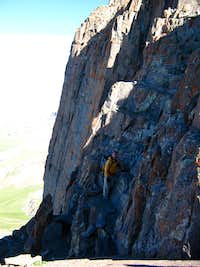 Once past a section of loose scree on firm and even slope (trekking poles help), Wetterhorn’s ridge becomes a talus trail. Aim for a minor tower at the end of a small rock gully and climb up to a cove. A wall with a notch with a cairn on top points the way to the final 3rd class pitch to the summit. 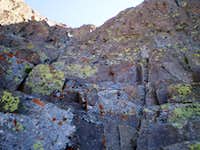 Once over the notch, a flat and somewhat exposed slanted slab leads the way to the final scramble. Descend this slab for about twenty feet to the starting ledge of the final pitch, which is a direct ascent on solid rock for about 100 feet. If concerned about the exposure, crossing the slanted slab may be the one place on the route a small 8 mm rope could add a sense of security. 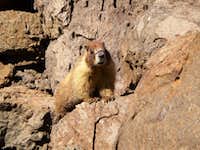 Climb directly up the obvious lesser-angled face after the slanted slab on solid hand and foot holds. The surprisingly flat summit is at hand as is a commanding view of Uncompahgre, 3 miles of tundra away. Descend your ascent route or, for more challenge, continue down the ridge to Matterhorn peak along the steep connecting ridge. Plan for the extra time the ridge will take if trying to connect these mountains in a day. Watch the weather and try to avoid ascending or descending the final 100 feet of Wetterhorn in wet or slick conditions. There is exposure here that could cause injury or death in a fall in the worst of conditions.

Crossing over to Uncompahgre 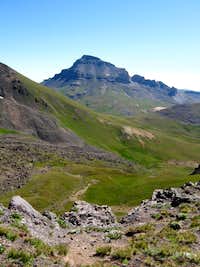 Depending on the route followed down from Wetterhorn, if headed towards Uncompahgre one must cross over to the saddle at the top of Matterhorn Basin. From the Southeast ridge of Wetterhorn, the CFI trail will take you all the way to the bottom of the basin, but will not reconnect you to a trail to Uncompahgre without significantly reversing the approach hike down valley. If hiking to the saddle from the top of Matterhorn Peak, descending on tundra is unavoidable.

If getting off trail from either route to cross over to Uncompahgre in summer conditions, aim for a service road/pack trail to the east of the Matterhorn Creek on trailhead, on a shoulder opposite Wetterhorn peak, to minimize your impact. This service road crosses the Matterhorn/Uncompaghre saddle and will lead you directly to Uncompahgre Peak. The trail connecting to the Southeast Ridge of Uncompaghre is well worn and fairly clear as it undulates across the tundra.

The route up the West Face is an off-trail scramble directly to a notch below one of Uncompaghre’s final summit plateaus. The route to the southeast ridge requires trekking the length of the steep cliffs on Uncompahgre’s south flank, gaining the ridge from the east face, and taking the gradual trail along the right side of the cliff line to the southwest. Be prepared for some monotony if this is your route. 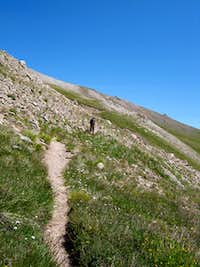 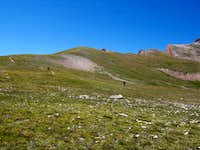 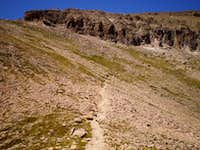 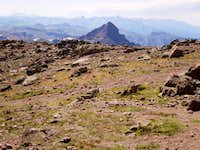 If taking the southeast ridge route of Uncompahgre, continue along the cliff line until you reach a series of switchbacks that will lead you to a saddle just above the southern cliffs. Cross over this short saddle to see a steep talus scramble on your right. This short but rough section will take you to the top of Uncompahgre’s major summit cliff band. The route up to the summit across a few remaining minor cliff bands is easy and uncomplicated. 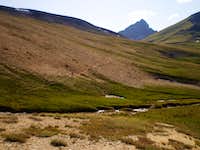 Return to Matterhorn basin from the summit by of Uncompahgre by descending your approach route. Plunge stepping or skiing down the West Face may speed the descent. Only glissade if well able to control your speed on a 45 degree angled hill. Descending the West Face in dry conditions is also not recommended due to rock fall danger, loose talus conditions, and just plain nastiness. Some avalanche dangers are also present on the West Face of Uncompahgre in Winter and Spring, although the remainder of the route is avalanche safe.

In winter, this route allows full expeditionary gear including a tow sled. In firm snow conditions an ice axe and crampons are mandatory. Rock fall from climbers above is possible on Wetterhorn and the West Face of Uncompahgre in dry conditions and a helmet might not be a bad idea. If you are not confident on exposed third class terrain, an 8mm rope, harness, some slings, and a few pieces of rock pro will allow you to protect the last vertical feet of the climb up Wetterhorn, although to most climbers these would be overkill. Sunscreen and glacier glasses in winter and extra water in summer are important things to remember on this route. Snowshoes and/or skis and skins would help avoiding a posthole hell in Spring.

Particularly in winter, map, compass and GPS could also prove to be essential for navigating the final section from Matterhorn Basin back to the trailhead at the North Henson Creek Road. Most of the route is obvious, but there are a few possible sections where one could take a wrong turn. Add External Links text here.